My Body is not a Game

It is as widespread as a popular sport – from rural provinces to dense slums and high-wired towns. There are no real winners, only victims.

Violence against girls and women in Brazil pervades private and public landscapes across all social boundaries.

As the Latin American nation proudly wrapped up its stint as host country of the world’s biggest sporting event – the Rio 2016 Olympics – the screams of girls and women demanding game over are only beginning to get louder.

Thousands of women and girls across Brazil suffer violence at the hands of men every year, simply because of their gender. Much of this violence stems from the culture of machismo, which is deeply entrenched in many Brazilian communities. It affects the choices girls make and events that shape their future.

In a country where over 500,000 people are raped every year, yet only 10 percent of cases are reported, Girlene, 30, is a true survivor who’s standing up to the widespread violence against girls and women in Brazil.

“When I was a teenager, my mother went to live with another man,” she said. “I had enrolled in a dance course at school – I loved to dance. When I arrived home after class I went to take a shower. The shower was outside and there was no door – just a shower curtain. As I was showering, my stepfather barged in and put his hands on my mouth and forced himself on me… I was 13.”

Girlene has found hope and strength through dancing and she’s now determined to speak out about violence against women.

“Sexual violence is a serious issue in Brazil due to a lack of public policies and it stems from a lot of other issues,” she said. “In my case, my mother suffered too. She wasn’t sexually abused, but she suffered violence. If these issues are tackled through workshops and lectures, such as those run by Plan International, girls could have a different future. To all the girls and women who have suffered like I have, please, speak up! Don’t let this person get away with it. Let’s show society we don’t have to stay quiet.”

In São Paulo alone, a woman is assaulted every 15 seconds. In São Luís, in the north east region of Maranhão, the situation is no different. For 17 years, Charlienne witnessed her father assault her mother on a daily basis. It deeply affected her as a child. Now she’s a mother herself and a wife. The 17-year-old is determined to have an equal relationship with her husband.

“If my husband were to beat me, I would go to my mother’s house and report him to the police,” she said. “Violence against women should not be tolerated.”

Violence for girls and women isn’t confined to households. It takes place in public places, too. Simple acts like going to school fill girls like 18-year-old Larice with fear. The teenager lives in a dangerous community in São Luís, where drugs and violence are rife. She always has to make sure her belongings are safely out of sight.

“Girls are more vulnerable in my community,” she said. “You can’t walk alone or you might get attacked like my sister did.  The only place I feel safe is at school and at home.”

As part of Plan International Brazil’s Girls Leadership Project, a group of girls are following in Girlene and Charlienne’s footsteps and trying to put a stop to gender-based violence. From taking on the local government to questioning the current laws on violence, they are determined to make their voices heard.

“Girls should speak for themselves. When we see girls take on politicians and speak up for their rights, it makes a big difference,” said Luca Sinsei, Plan Brazil’s program director. “Their voice represents their lived realities and it is the first step to ensuring they can grow up in an environment where they can learn, lead, decide, and thrive.”

Authorities are making moves to combat violence against girls and women. This year marks the 10-year anniversary of the Maria de Penha Law – a landmark ruling that was in put in place with the intent of tackling domestic violence.

Kazumi Tanaka is Chief Commissioner of the Special Women’s Police Unit in Maranhão.

“Violence against women is the most common crime we have in Brazil and it’s one that needs to be tackled,” she said. “There are two reasons violence continues to take place. Women not only live in fear, but there is a deep-rooted emotional dependency, where women in Brazil feel they are not worthy without a man.

“The Maria de Penha Law is a legal landmark in the country, which has brought hope to many and provided an opportunity for women to speak out about this type of violence.”

To ensure all women across the region are able to report violence, Kazumi and her team have set up mobile units that visit rural communities across the region so women can visit workshops, learn about their rights, and report crimes.

These girls from São Luís represent a growing group of young people who are fired up and ready to change the attitudes in Brazilian society and put an end to violence.

“Violence against girls and women needs to stop,” said Maria Fernanda, 18, from São Luís. “Every day we face prejudice and we are excluded from society. It’s about time we had our turn and our voices were heard.”

Health Education Could Have Changed Her Life 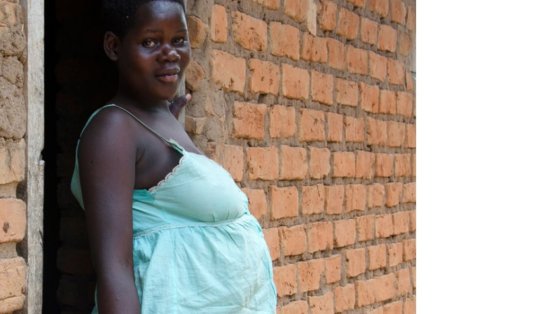 If only she’d known more about her own body and had help from a health teacher, like the one who has been working at her school for the past few months through a Plan International program. Then, life could have been completely different forRosemary.

Now, she is stuck in an incredibly difficult situation. She has dropped out school and is six months pregnant with the child of a stranger.

“School was always a challenge for me,” said Rosemary. “We do not have much money at home, so buying textbooks or a uniform was difficult. Still, I managed to follow a few lessons with the help of others. Until I had my first period.”

Rosemary used old rags to prevent blood from leaking out while she was at school.

“But that didn’t work very well and I got blood on my dress,” she said. “I was ashamed and when I had my period I stayed home from school. I did not feel so good.”

One day a stranger approached Rosemary.

“He told me that I could buy sanitary pads and that they would protect me against the blood,” she said. “He was happy to give me money. I bought the pads and was very happy until the man visited our house a few days later. He said he wanted the money back, but I didn’t have the money. We went to the man’s home and to pay the debt I had to have sex with him.”

Rosemary did not know you could get pregnant from having sex.

“Nobody had ever told me this,” she said. “My old classmates have told me that they now have a special teacher at school who tells them about things like this. This lady also gives self-made emergency pads to the girls who need them. They make the emergency pads at the Health Club after school. I wish I had known all that.”

Many children in Uganda – both boys and girls – have little knowledge about their own bodies. Girls do not know what is happening to them when they get their period. The first time it happens, many think they are ill or even dying. They do not know how to protect themselves.

To increase the knowledge children have about such things, Plan set up a health education program in Uganda. In addition, after school, children get together at health clubs to learn more about the subject and talk about their experiences.

Sadly, Rosemary saw no other solution than to quit school. She and her mother are devastated.

“I wish my daughter could finish school,” her mother said. “It is important. Then she would have had a better chance in life than I got. Now that is impossible.”

Rosemary’s mother hopes her daughter can go back to school after the birth, but it won’t be easy.

“My daughter is too ashamed,” she said. 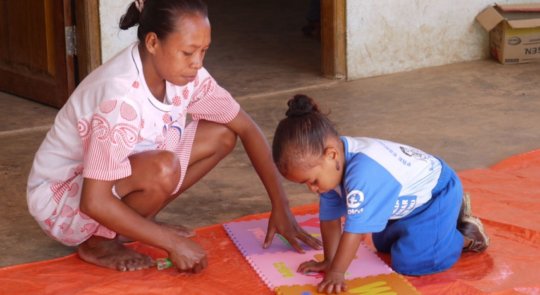 Anabelita and her 3-year-old daughter Joaninha

Anabelita carries her 3-year-old daughter Joaninha carefully in her arms as she makes her way to an early childhood education center run by Plan International.“I’m happy, because I can help my daughter to prepare for the future,” Anabelita said.She is Anabelita’s only surviving child. At the beginning of April, streams will dry out, the leaves of trees will turn brown, and the earth in the fields will crack. Children will have to dig deeper and deeper to find water from muddy holes, and the water will become dirtier. It was contaminated water that led to the death of Anabelita’s first daughter. “My daughter got diarrhea when she was nine months old,” she said. “I noticed that she was sick. I tried to nurse her and carried her everywhere in my arms.” After five days of illness, her daughter suddenly went limp in Anabelita’s arms. She called an ambulance, but it was too late. Her daughter died on the way to the hospital. “I was shocked and distressed,” she said. “It was very difficult.” Mothers in the community rallied round to support and console Anabelita. They understood her sorrow, because many of them had also lost their young children due to diarrhea or other preventable childhood diseases. When Plan’s early childhood education center opened in her village, she was able to take part in educational meetings for parents. There she learned that she should have taken her sick daughter to hospital as soon as she fell ill. She also learned that just boiling drinking water is not enough. It is also necessary to wash hands frequently, boil all water for household use, and build toilets farther away from houses. “At the early childhood education center, community volunteers explain to the parents that they should not wait too long with a sick child before going to the hospital,” said Maria Beatriz Samento, who is in charge of the early childhood education center. “Often, parents wait for several days before taking the child to the clinic, and by then it can be too late.” Anabelita is now determined that Joaninha will not experience the same fate as her first daughter. She now knows how to safeguard her daughter’s life and provide her a safer future.

‹ 1 ... 4 5 6 7 8 9 10 11 ... 13 ›
WARNING: Javascript is currently disabled or is not available in your browser. GlobalGiving makes extensive use of Javascript and will not function properly with Javascript disabled. Please enable Javascript and refresh this page.