As of April 26, Zimbabwe had 31 confirmed cases of COVID-19. And just like most of the world, the measures taken to stop the spread of the virus has had a significant impact on the country, including school closures and lock downs. We know that girls and women will suffer from secondary effects of the virus — increased gender-based violence, not returning to school, early and forced marriages, and the list of potential impacts goes on.

But what does everyday life look like for adolescent girls right now? We interviewed girls ages 13-18 via phone calls because we wanted to make sure our response was tailored to this age group, which is often forgotten as attention is focused on young children or women more broadly. The answers are far direr and heartbreaking than expected.

“I feel very very sad and worried because I am locked here in [name of town*]. My family is in Bulawayo town while I am here living in a small and crowded room,” said Precious* when she was asked what her biggest need is right now. “I have no pads, no food and no money [...] I failed to raise enough money to travel to Bulawayo when we were informed that schools were closing earlier by our School Head […] I don’t know where I am going to get the money for me to be able to travel to Bulawayo and am not sure if we will be allowed to travel any time soon. I am not able to communicate with my family and there are no buses.

“This is going to affect my results when I finally sit for the exams. I am not able to study because most of the time I will be busy begging for food, which most families are no longer able to give […] What can I do, I don’t have much and I have to survive.”

The response from Precious was echoed by classmates as girls are worried about meeting their basic needs — and although they are anxious and afraid, they very much want to continue learning. They are experiencing hunger, separation from family, a lack of hygiene products and other necessities, as well as extremely heightened anxiety.

Prior to the arrival of COVID-19, Plan International had begun to work with Precious and other adolescent girls to address root causes that prevent them from finishing secondary school. The girls challenged several aspects of traditional development design, which were collected into a previous blog post. In response, architectural and building plans were being put in place to build a dormitory, and programming to better support students was being developed. While these activities will resume once it is safe to do so, girls can’t wait that long.

Using interviews to better understand the immediate needs, funds are being repurposed for activities such as those listed below.

Development practitioners know from past responses that crises hit the most vulnerable, including girls, the hardest. However, despite on-the-ground experiences, there is lack of data to detail the full impact on girls’ lives. As the COVID-19 crisis continues to unfold, the international development industry must make it a priority to include girls in response planning first and foremost to ensure that programs are addressing girls’ immediate needs and priorities, and secondly to ensure that accurate data, disaggregated by gender and age, is captured so that the development community can respond more quickly during the next crisis. Without taking these steps, past mistakes will be repeated and lessons for future crises will not be learned. 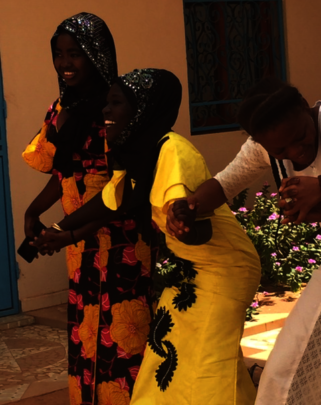 There are women in Rosa’s community in Colombia who don’t take professional jobs because their husbands forbid it. These women are forced to believe that a woman’s purpose is to take care of the home, and a man’s purpose is to have a career. There is no agency — no choice in these roles. And there are girls and boys watching this who think that’s how things should be once they’re married too.

But because of you, Rosa knows there’s a change coming.

Rosa is a participant in Plan’s Champions of Change program, supported by people like you, which allows boys and girls to play soccer together and have open conversations about gender equality.

IN A SURVEY CONDUCTED BY PLAN, 44% OF YOUTH PARTICIPANTS BELIEVED BEING VIOLENT IS PART OF MEN'S NATURE. BUT CHAMPIONS OF CHANGE IS ALLOWING YOUNG PEOPLE TO WORK TOGETHER AND FIND SOLUTIONS THAT TRANSFORM THEIR CULTURES.

Since Rosa has been in the program, she’s seeing male and female relationships much differently.

“The boys used to be chauvinistic, but now they’re treating us differently,” she says. “Girls are becoming more confident and powerful. I’ve learned to take control of my life, and help others who might still not know how to do that.”

Rosa says many girls in her community, including some of her friends, think it’s desirable to become a mother at a young age. “If they have a boyfriend, they think the best way to keep their boyfriend is to have children with him.” But with Champions of Change, more girls are realizing that this isn’t their only potential.

“We have our own thoughts and can do the same things that men do,” Rosa says. “We are not objects, we are human beings. We’re equal.”

In a community where girls are rarely asked what they think, you’re helping to ensure that Rosa is being listened to — by boys, men, and women alike. Because of that, she’s no longer fearful of her future. She’s hopeful.

“Girls are becoming a force, and we’re changing minds,” she says. And they have you to thank for giving them the wheel.

The last time I was in Nepal was in the early 1970s. I spent five years working there when I was just starting out my career in international development. Now, as a member of the board of directors for Plan International USA, I went back to Nepal just a few weeks ago to see a variety of Plan’s program activities. I was often asked on the trip about the changes I could see, then vs. 45 years ago. There were many, and they were extraordinary.

I have to start with the obvious: the staggering urbanization in Kathmandu Valley  – the congestion and the traffic  – as well as the vibrant, bustling economy we saw in Banke District, where we spent most of our time. When I arrived in Nepal in 1970, there were about 225,000 people in Kathmandu; today, the city extends much further with more than 2.5 million residents. Where I once saw rice paddies, I now saw new buildings, cars, and motorcycles. I certainly wouldn’t drive my old Honda-90 motorbike in today’s Kathmandu!

As mind-blowing as these changes were, I was most impressed by the expanding advocacy and voice of adolescent girls. The girls I met in Nepal have an intense commitment to promote social change and improve the lives of people, whether working independently or in partnership with civil society and local governments. And Plan International is playing a huge role in supporting the growth of these young women.

In Banke District, we saw young women who had been rescued from bonded servitude (the Kamalari System) and given the opportunity to complete grade 12 and gain good paying jobs. I will not soon forget that Sona, who now works for a cooperative, has bought property with her savings and is well on her way to becoming an entrepreneur.

We also met with several adolescent girl groups and heard girl after girl talk of how they are using their voices to promote change. They are working with their own families to end isolation and discrimination when they have their menstrual periods; they are joining together to rally against child marriage and other harmful social practices. They have learned that the declaration of new policies by government is not enough, that there must be action – and, if not, that they must speak up.

The girls spoke so clearly to us about the rights they now know they have, whether for education, health, justice, or non-discrimination. They have organized “days of activism” against domestic violence, and when hearing about a rape in a town several hours away, they organized to argue for justice. They have reached out to journalists to discuss why the child marriage age should not be lowered from age 20. They are learning how to be entrepreneurs and have created savings groups. Perhaps most importantly, they have laid out clear visions for the future. They want girls (and other children) to have more education, better lives, good jobs in Nepal (rather than feeling the need to go abroad for work), and equal opportunity regardless of ethnic background or gender. They have asked their mothers about the dreams they had when they were teenagers, and then spoke of their own dreams and desire not to marry until they are between 20 and 25 years old. These young women know what they want – and they clearly articulate it.

I was especially impressed by the efforts of these youth leaders and their local civil society partners, such as Plan International Nepal and SAATHI, to advocate to and work with local government officials. We heard the deputy mayor of Kohalpur Municipality and leaders from Wards 12 and 13 lay out their strategies to end child marriage and human trafficking.

Particularly memorable was seeing the community radio journalist named Anu interview the chairman of Ward 12 and quiz him about his office’s efforts to end child marriage. She drilled in on the key question: has he allocated budget? By the end of the interview, he committed to making his Ward free of child marriage within a year. The chairman of Ward 13 was present, and he also asked for an opportunity to speak about the strategies of his Ward to overcome cultural obstacles and end child marriage – and he quickly added that he has allocated budget to support their efforts.

These young women are making a difference in their communities and playing roles vastly different than what I saw 45 years ago in Nepal. No longer are girls sitting quietly, hesitant to speak. Now, they feel the confidence to come together in networks and advocate for change, whether it is ending child marriage and human trafficking, expanding educational and job opportunities, or confronting climate change.

Seeing these remarkable young women – and how vastly different they are from the reticent teenage girls I saw 45 years ago – I can’t help but marvel about some of the extraordinary women I did have an opportunity to work with all those years ago. Knowing how much these women achieved in spite of the obstacles they faced, I feel very confident that today’s growing pool of young Nepali women will lead to a stronger and better Nepal. And I am proud that Plan International is supporting these champions of change.