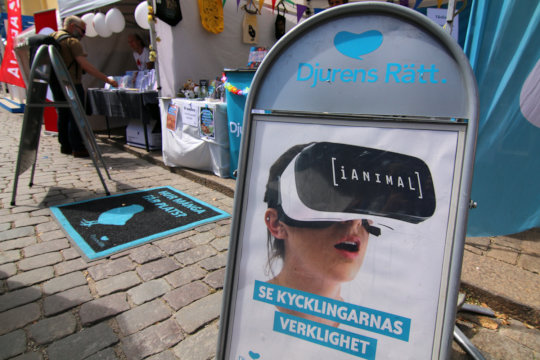 Now we can officially say that the summer has come to an end. We put away the tent and start preparing for next year. As we look back on the past months, we can proudly say that it has been a successful tour. We have visited many different cities around Sweden as usual, but this time focusing on the campaign “99 miljoner” (99 million), about the situation for chickens. From May until September we have participated in festivals, street markets and similar events, talking about animal rights and raising awareness about the life and suffering of chickens. We aim not only to inform society about this problem, but also to reach concrete changes in the industry.

For those of youwho haven’t read previous updates, it might be useful to know that the name of the campaign refers to the actual number of chicken individuals that are killed to become food in Sweden every year. That is approximately 99 million chickens. The most common bird in Sweden but that nobody has seen, because they are kept inside the factories all their short life.

If you follow us, you may remember that this year we have worked in collaboration with the organization Animal Equality offering our visitors to try a virtual reality experience. We have arranged this activity at several of our tour stops, giving visitors the possibility to see what we call the chickens’ reality. Through this virtual reality film, the observer becomes a chicken and experiences how life is for them. It only takes four minutes, but it can change many lives, a real eye-opener.

Over 950 people have seen the film during the summer tour and we have met different reactions. Most of the visitors were shocked, of course, wondering how this situation can be possible and completely legal. Some of them were concerned, sad, angry…being the first time they face what happens behind the farm walls. And finally, a relevant part of them decided to leave chickens off their plate! We always have vegan recipes available at our tour stops and this year we had specifically launched “4 ways to replace chicken”, a leaflet with simple and delicious inspiration to make the process as easy and tasty as possible. Just over the course of this summer we handed out over 5000 plant-based recipes.

How many can fit?

Every summer we develop different tools to reach as many people as possible and spread the message of our campaign. This year we had, for instance, a quiz and a small mat, in addition to the already mentioned VR-experience. Participating in the quiz, one needs to answer three questions about the chickens’ situation and those who do it right have the possibility to win a vegan cookbook. But what is the point of having a mat, you may wonder? The mat is 1 meter squared, showing a chicken silhouette with a simple but direct question: “How many can fit?”. We ask the curious visitor how many chickens they think live in 1 meter squared in the food industry. At first sight it’s not easy to guess right, so we’ve had interesting conversations about that fact. They can try to stand on the mat, compare and experience how it feels. The sad reality is that up to 25 chickens spend their lives in such a small space, and most of them don’t even get to feel the sunlight on their feathers. You can see a picture showing the mat with the question in Swedish in this report.

Year after year we participate in festivals for children as well. Even if we usually have positive responses, this year we have been extremely popular! Examples of this kind of events where we have participated are the Gothenburg Culture festival and Barnfestivalen (Children’s festival), among others. In these environments we often present Rädda Djuren-klubben (“the club to save animals”), our club for children that like animals! The goal of this club is mainly to raise childrens' awareness and empathy for animals, while offering the possibility to learn funny and interesting facts about them. The priority here is activities for the youngest and our mascots are very appreciated as well. This summer we had Kyck-Linn with us, a cute friendly chicken that loves to dance with children.

Finished, but not really! ;)

Summer is now over, but we continue working during autumn. The campaign “99 miljoner” is going to be present and making sure that no one forgets the chickens. In November the campaign will be announced in the main Swedish train stations and we are going to be there talking to all interested people like we did during summer. Meanwhile, we start working on next year’s campaign to make sure that we do our best when the summer comes and we are on tour again. We are already looking forward to the next edition, also having in mind that this one is going to be our 15th summer tour! 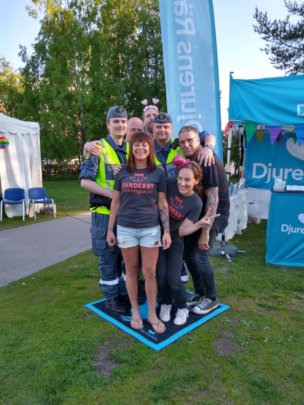 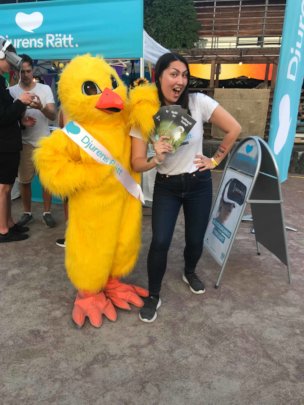 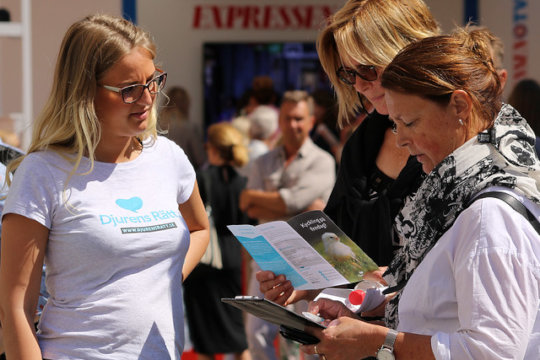 Spreading the word about chickens

The 14th summer tour since the beginning in 2006 is up and running! The summer tour is one of Djurens Rätt´s most valuable outreach efforts during the year. Every summer tour means thousands of meetings, impactful conversations and results in many new voices for the animals.

So far this summer we have had great tour stops along our long country of Sweden. Djurens Rätt has been far up north visiting Kiruna Festival and also down south visiting Lund Pride Festival. In between we have been seen at West Pride Festival, Garden Festival, Lollapalooza, Järva Political Week and many more events. In total we will visit about 70 events this summer. Every summer tour is based on a campaign and the main focus 2019 is the issue regarding chickens in the meat industry and their conditions. Djurens Rätt's goal is that more people leave chickens off their plate.

Chickens make out the absolute majority of animals killed in the Swedish meat industry and they also suffer some of the worst conditions. Djurens Rätt wants to spread the word about chickens and show the reality behind Swedish chicken meat in grocery stores. At all tour stops the “99 miljoner” campaign is the outreach focus. This summer we are collaborating with the global animal protection organization Animal Equality and their virtual reality (VR) project iAnimal. At some tour stops we are showing visitors the iAnimal chicken VR-video in which the viewer is transported inside a factory farm and a slaughterhouse. There has been great interest among visitors to watch. Many viewers express shock, anger and grief about chicken’s conditions after watching. The VR experience affects a lot of people more than words ever would do.

Every tour stop, every meeting and every conversation is enabled by Djurens Rätts impressive tour volunteers. Every summer tour engages about 100 volunteers joining one or more tour stops. They help with preparations, set up tents, hand out leaflets, talk to visitors, recruit members and much more. Without our volunteers the summer tour wouldn’t be possible.

During this week Djurens Rätt is taking part in Almedalen Week, which is an annual event and forum in Swedish politics where representatives of the major political parties join. Djurens Rätt has been part of Almedalen since 2010 and this year we are 11 representatives from Djurens Rätt, including employees and volunteers. Almedalen is one of the summer tours biggest tour stops and we will enjoy meeting all visitors, politicians and entrepreneurs at Almedalen. In additios to Almedalen we are looking forward to all upcoming tour stops such as Way Out West Festival, Bayside Festival, Stockholm Pride, Hallifornia, Urkult Festival and more. It’s going to be a great summer for the animals.

Do you want to contribute to the Summer Tour and thereby help the chickens? Do you want to support our work? Together, we make difference for the animals. Thank you! 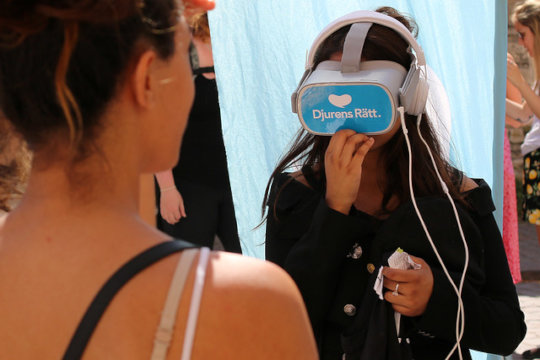 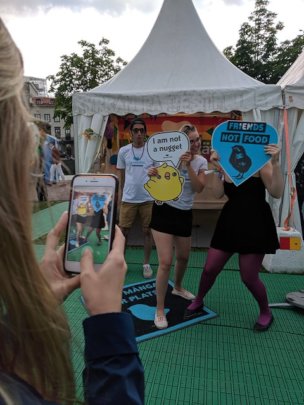 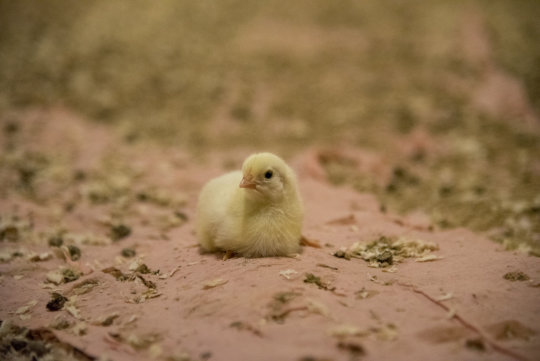 The food industry is the area where the largest number of animals are used, either in the production of food or to become food themselves. Each year more than 100 million animals are killed in the Swedish food industry. About 99 million of these animals are chickens.

Chickens make out the absolute majority of animals killed in the Swedish meat industry and they also suffer some of the worst conditions. The extreme growth-oriented breeding has made chickens grow so fast that their bodies hurt. It’s not unusual that chickens suffer from decreased mobility and leg issues. They only live 35 days before they are killed. During their short lives they are kept very crowded - up to 25 individuals per square meter. Often they are not even measured in individuals but in weight, 36 kilograms per square meter being the usual limit. That is more crowded than what is allowed for any other terrestrial animal in Sweden, less than one A4 sheet of space per individual.

During 2018 Djurens Rätt started the campaign “99 miljoner” (99 millions) for the chickens. The campaign builds on anonymous pictures and movies taken inside chickens farms in Sweden. The material is intense and the vast majority of people will be upset by witnessing how chickens are treated in the meat industry. Even though the material is intense, it shows nothing illegal. The treatment these individuals experience is cruel, but legal.

Djurens Rätt wants to see immediate improvement for chickens’ conditions. With our campaign “99 miljoner” we want people to leave chickens off their plate and we demand that companies in the food industry take responsibility for chickens. During our Summer Tour we will spread the message about chickens. We are visiting around 80 events between May and September and are getting ready for thousands of conversations. By meeting people we can spread knowledge and influence them to make compassionate choices.

The Summer Tour is a huge project where about 100 people volunteer each summer to make a difference for animals. In May we are arranging a volunteer training called “The summer tour kick off” for volunteers who want to learn more about outreach work and animal rights. The people who join our kick off will be summer tour experts and an important part of the project. Together with them we will work hard this summer to reach changes for the chickens in Sweden.

Our goal is to dramatically decrease the consumption of chickens during 2019. With the help of the Summer Tour we will reach that goal. With your help, all donators at Global Giving, we can do more and better tour stops. We want to print new materials and go to more places this summer.

Do you want to contribute to the Summer Tour and thereby help the chickens? Do you want to support our work? Please make a difference with us and donate money for our Summer Tour. Thank you!