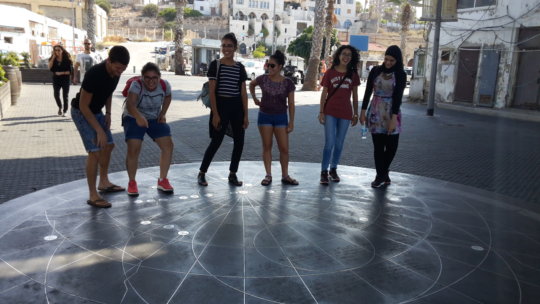 The summer is in full swing and, like every year it is time, for Sadaka-Reut to review the past months of planning programs and performing activities with young community leaders. Community in Action is in its final stage and the young leaders had their last weeks of volunteer work with their schools and community centers. Finally, the 9-month long educational program is coming to an end with many successes. The year began in October 2016and included training sessions through lectures, workshops and tours led by activists, community members and NGOs focusing on social injustices and on structures and consequences of nation-based oppressions; public outreach campaigns’ development and execution; leadership skills development through campaign building training, advocacy and other social change skills designed to build activism capacity, and a variety of dialogue sessions. We are very happy that this cycle we managed to have 76 activity days with the participants, 4 day-tours and three seminars held in Haifa and Jerusalem full of learning about history, narratives and identity.

“I gained a lot of information, it is important for me to know the history of my people from different places. I think that my people live in fear because they do not know their history. I feel right about who I am when I understand my history.”

11 youth of both nationalities and gender, completed the educational program. The participants passed through 2578 hours in total of voluntary work in 4 different local schools and community centers reaching in total 63 6-17 year old Jewish and Palestinian students.

“Volunteering makes me more confident that education is the most important thing I can do in my society, and it gives me a critical perception of the reality of the pupils I will work with in the future.”

The young people have undergone an intense and sometimes challenging progress, and we can see that the participants made an impressive development in creating a feeling of responsibility and solidarity to their communities. We are very grateful that these young leaders could express their thoughts and believes through four amazing public outreach campaigns that they designed, planned and initiated to promote a just and peaceful society and which challenged currently accepted norms of prejudices, discrimination and racism.

“I used to know nothing about these issues; I was embarrassed to speak about it. Now I seek this kind of discussion”.

Now, after 9 successful and inspiring months full of learning, sharing and creating friendship through partnership, the team of Sadaka-Reut is saying goodbye to the group of young activists. We wish them all the best for their future activities and are already prepared to welcome the new group of motivated participants who will be future social change makers of Sadaka-Reut.

We would like to thank you for your generous support of the Community in Action program. Only through your donation we are able to work so fully with these future change-makers. 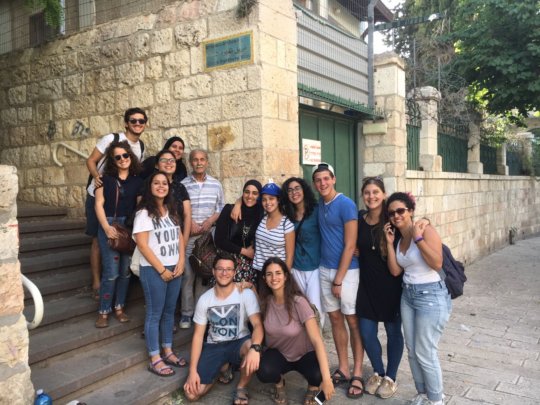 Community in Action Report from March until May 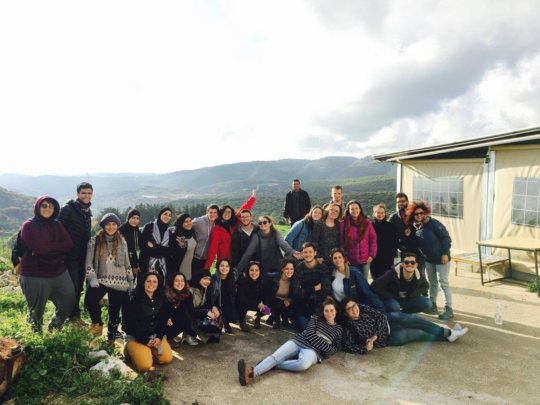 In Iqrith after meeting with a local activist

Community in Action from March to May 2017

The participants of “Community in Action” have had a productive term since March, when Sadaka-Reut joined the Global Giving Platform. Besides volunteering 4 days a week in various schools and community centers, the Palestinian and Jewish youth went on three tours, took part in a seminar and implemented an initiative.

The first tour they went on was called “from Jaffa to Beirut”, where they learned about and got to see the sites of destroyed former Arab neighborhoods in Jaffa, Haifa and Iqrith (which is in viewing distance of Lebanese villages, where many Palestinians fled to temporarily, but weren’t granted to return).  A month later, the group visited the Jordan Valley, where they met with Bedouin residents and local activists to learn about and witness the harsh living conditions and uncertain future they face due to the reality of military occupation and settlements that surround them. The third tour took the group to Jerusalem, where they met with an activist of the Israeli Black Panthers and hold a seminar about the different forms of structural discrimination based on the similarities of the struggles Mizrachi Jews and Palestinians face in Jerusalem.

During these tours the participants gained a lot of new knowledge about the history of Israel, the occupation and different forms of discrimination opposing the current mainstream narrative in the country. Coping with this information and including it critically in one’s personal understanding of the conflict is not easy for most participants and negative feelings can easily occur.

-“I am angry that I do not know information about the past. Knowing more and being revealed to history makes me want to invest more in changing my society and myself.”- (Palestinian)

Fighting these negative feelings it is part of Sadaka-Reut’s approach to encourage the Jewish and Palestinian youth to find an issue they all consider a problem in their society and implement an initiative to raise awareness about it. Inspired by “The Women’s March”-movement, they decided to hold different workshops dealing with gender equality themed “Until We Become Equal” in a popular park in Jaffa. Additionally, there was a children’s playground, where the women coming to the park could let their children play while they engaged in the workshops or just stopped for a coffee. The idea of the initiative was that the participants could reach out to women that wouldn’t usually go to a lecture about gender equality and hence offer them a different approach to the important issue.

-“Unlike the rest of the Jewish group, I think that I need to find a way to deal with the difficulties that arise when I am revealed to new information that shows my people, or my side, in a negative light.”- (Jewish)

The initiative was very successful and encouraged the Palestinian participants to take a lead in the group’s activities, since the Jewish participants took a step back and trusted their partners in identifying the specific needs and best ways to organize the workshops that would address the Arab community in Jaffa.

Thank you for supporting our project and helping the youth of Israel to create a more equal and just society! 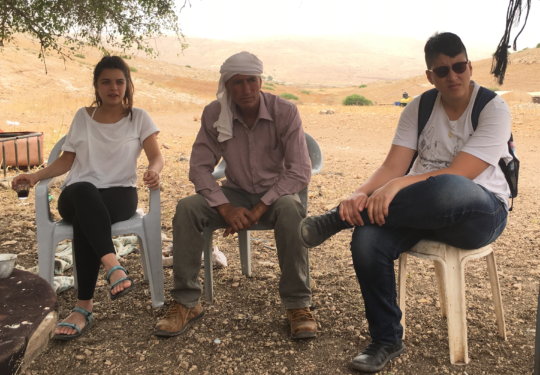 Meeting with a resident of the Jordan Valley