Please, Just Say NO! It Will Save Lives! 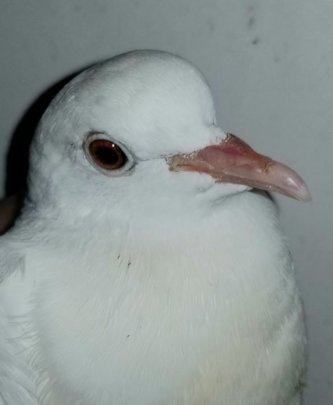 Many of the birds that are brought to us for rehabilitation are victims of situations that can be easily avoided. We ask that you please keep in mind that humans have the ability to save innocent birds and animals from injury or death by simply saying no to things that are harmful to them.

One of the most heartbreaking situations is to have an innocent white ringneck dove brought to us because it was used in a ceremonial release at a wedding, funeral, or some type of special event. Please be aware that ringneck doves in the United States are completely domesticated, have no ability to find their way home, and have no ability to survive on their own. Please, just say no to the ceremonial release of any type of living creature! Though not animate objects, balloons and lanterns should also not be released as they not only frighten birds and animals that encounter them but can also be perceived as food and ingested by wildlife when they end up on the ground or in a body of water. Strings and ribbons tied to balloons can also entangle birds and animals resulting in the loss of their lives.

The adult, male, English House Sparrow caught in a glue trap was one of the fortunate ones. It was found and brought to us for care and survived. Any living creature caught in a glue trap faces a long and torturous death. There are more humane methods available that allow for the capture and relocation of unwanted rodents or insects. Please, just say no to glue traps!

For the safety of your cat as well as the safety of the wildlife in your yard, please keep your cat inside or build it an outside enclosure (catio) where it can enjoy the fresh air and sunshine without being able to predate birds and animals. Putting a bell on your cat's collar doesn't mean it can't or won't catch a fledgling bird or a baby bunny. Please, just say no to free roaming cats!

Here in Southern California baby bird season starts as early as December/January for hummingbirds with other species nesting and raising babies from February into September.  Many, many baby birds lose their homes to tree trimming done during baby bird season. Sometimes the nests can be put back in nearby trees or shrubs, but when this isn’t possible, the tiny birds become homeless and have to be brought to rehabilitators to be raised.  Humans are a poor substitute for the natural bird parents. Please, just say no to tree trimming during baby bird season!

Careless littering of things like fishing line, fishing hooks, plastic and glass bottles, plastic six-pack rings, food containers, and balloons can result in illness, injury, and death for the wildlife that falls victim to harmful litter. Always properly dispose of litter when you encounter it. Don’t litter and be caring enough to pick up harmful litter left by others. Please, just say no to littering!

Every year there are chickens, ducks, quail, rabbits, and other small animals raised in classrooms by well-meaning teachers. Sadly, many of these teachers don’t arrange for permanent homes for these little creatures when the classroom hatching project is done, and the little birds and animals end up being abandoned in public parks when they get larger, louder, and messier. People rationalize that the birds and animals will be better off in the wild. That is categorically untrue. These are domestic birds and animals with zero ability to survive on their own in the wild for their normal life spans. Easter is another time when people fail to use their good sense and make impulse purchases of the cute little birds and animals readily available at feed stores, swap meets, and pet stores. Sadly, the impulse buys also often end up being abandoned when the novelty wears off and they become inconvenient. Please, just say no to classroom hatchings and impulse buys! 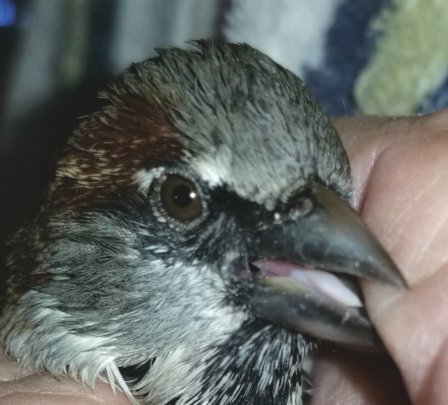 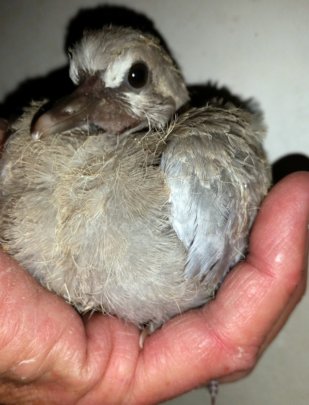 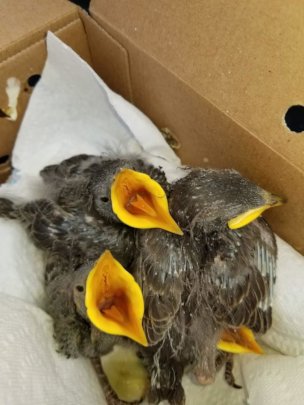 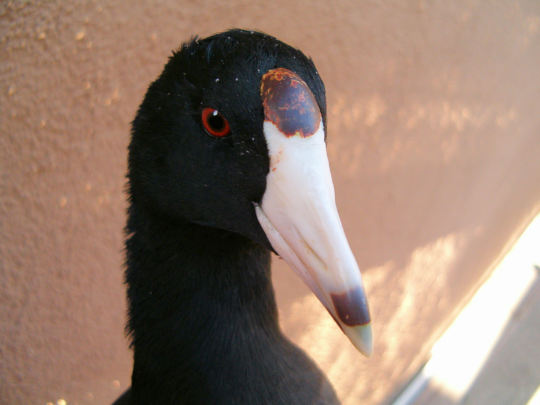 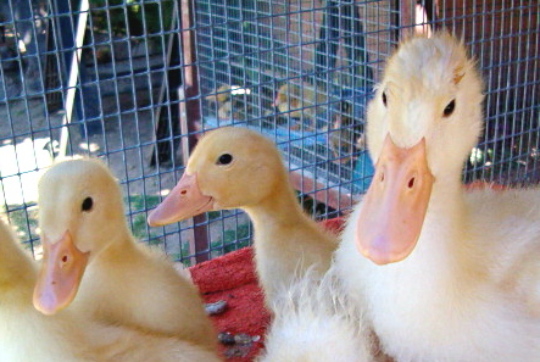 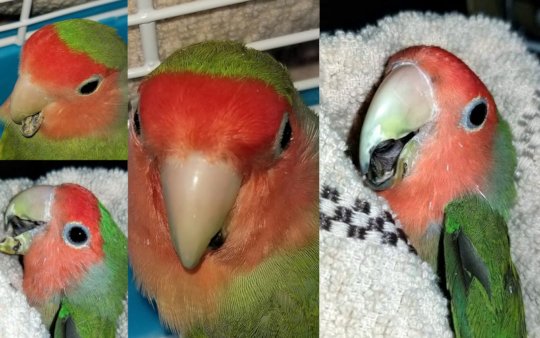 The numbers are in for 2019, and it was another busy year of helping birds of all kinds! We ended 2019 with having assisted 736 birds and 1 chinchilla during the year! Many of these birds were orphaned babies while others were sick, injured, abandoned, unclaimed escapees, or needed to find new forever homes. With many of the large parrots we assisted, their original owners were elderly and/or unwell and unable to continue caring for their beloved birds. Some of the large parrot species can easily live into their 40's, 50's, 60's, or longer, and their long lifespans are something to consider if you are thinking about adopting or purchasing one of these types of birds. There are literally thousands of birds in need of forever homes, so we ask that you always consider adopting rather than purchasing a baby bird.

Veterinary costs continue to be our largest expense, and we are very grateful for your financial support. Your support allows us to continue helping sick and injured birds.

Baby bird season will be starting any day here in Southern California, and we will be inundated with tiny birds.  Many of these little birds require not only specialized diets that are expensive to provide but also require housing in veterinary quality incubators that are also quite pricey. Here again, your financial support allows us to provide these tiny beings with the food and housing that they require.

Here are the details on some of the many birds who have benefited from your support:

Lovey: Lovey is a young lovebird that shattered his lower beak in some type of freak accident. His owners did not seek veterinary care for the injury, and the lower beak grew out at an angle that resulted in Lovey not being able to close his beak and therefore was unable to eat adequately. Lovey's owner relinquished him to our organization (AURA), and Lovey received the veterinary care needed to trim and shape his beak. Lovey's beak will continue to need trimming and shaping for the rest of his life. He has been adopted into a loving home and will continue to receive the love and care he needs. Lovey's veterinary costs: $200

SeaMore: SeaMore is an unbanded racing pigeon that was unable to find his way home. He started hanging around a neighborhood in Laguna Beach where the residents provided him with food and water. SeaMore was living the good life there in Laguna for about 6 months until a predator attacked him and broke his right leg, bit a sizeable piece of his chest out, and sliced his upper neck. Everything SeaMore attempted to eat or drink drained out of the holes in his neck and chest. He would have starved to death, died of thirst, or have been killed by the original predator or another one. SeaMore was lucky and was brought to us for care. He needed stitches in his neck and chest and pins in his leg. SeaMore is almost completely recovered and is being adopted by one of the families that saved him from certain death. SeaMore's veterinary costs: $890

Grace: Grace is a 10 year old female cockatiel with a massive fatty tumor on her abdomen. Grace's original owner was not able to afford veterinary care for Grace and relinquished her to our care. Grace will require surgery to remove the tumor if/when it grows to the point it is touching the ground or otherwise causing her discomfort. Grace's surgery estimate: $850

Milo: Milo is a 16 year old Red Breasted Cockatoo also known as a Galah. Milo became seriously ill and became an ICU patient at one of our veterinary clinics for about two weeks. Milo was treated and appeared to be doing well and was released to return to his foster home. Within a few days, Milo was extremely ill again and had to return for another approximately two week stay in the veterinary ICU. He was again released to return home. When he became ill yet again, Milo was taken to another veterinary clinic where he was correctly diagnosed and received chelation therapy  for zinc toxicity. You would think Milo was cured by this point, but no he wasn't! Milo became ill yet again because he had again ingested zinc or another toxic metal and had remnants of it that were clearly visible on his xrays. Again, Milo went through chelation therapy only to find that some metal remnants remained in his digestive system. Surgical removal of these remnants was required, and Milo is now a healthy and happy bird! About midway in this whole process, Milo was adopted by his foster caregiver and her family who took over his veterinary costs at the time of the adoption. Milo's total veterinary costs: Greater than $10,000 of which AURA paid about half.

Bella: Bella is a female Scarlet Chested Parakeet that was picked up as a stray by a local animal control agency. Bella was bailed out of the animal shelter and came to us for care. She was missing one leg entirely (old injury), had clogged nostrils, and tattered feathers. Bella was treated for her clogged nostrils and was subsequently adopted. Bella's adopter has had Bella examined by her own veterinarian and will provide any further veterinary care that may be needed. Bella's veterinary costs: $200 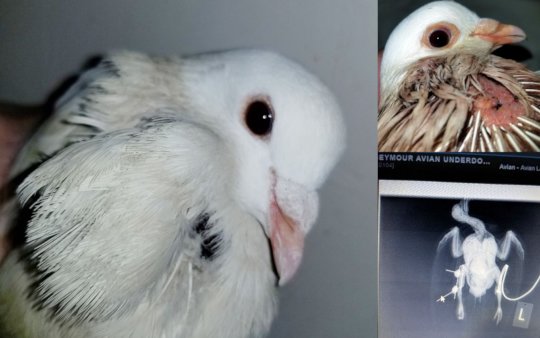 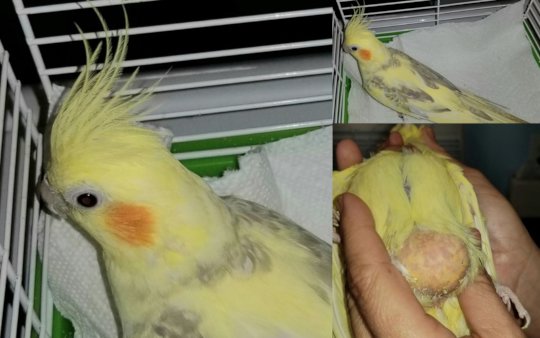 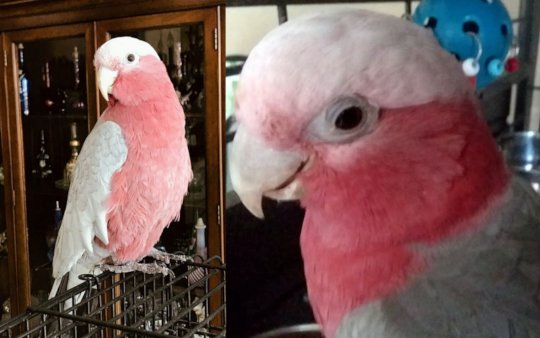 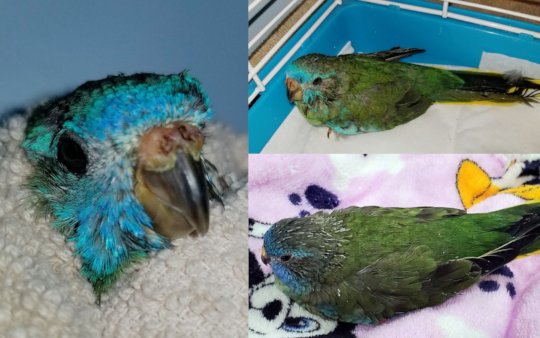 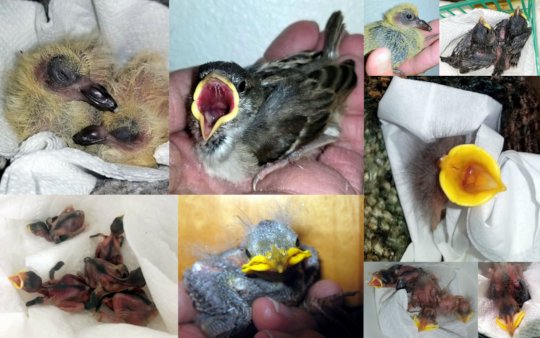 Meet Some Of Our Amazing Underdog Birds! 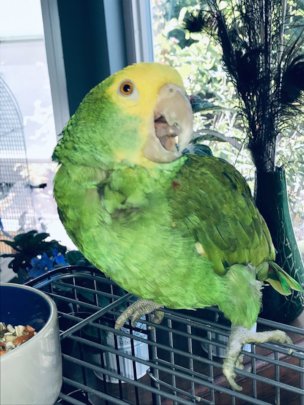 Avian Underdogs Rescue Association (AURA) is now completing our third full year as a nonprofit organization. We have suffered growing pains and paid our dues for those! We are extremely grateful to all of you who have been our loyal supporters and donors throughout! Thus far in 2019, we have assisted over 700 birds and could not have done this without you. Please continue to support us and our birds. The GlobalGiving GivingTuesday fundraiser is coming up on December 3, 2019. We hope you will donate on that date and help us earn much needed matching funds and maybe even some bonus $$!

Please meet some of our special rescues here!

Sunny: Sunny is a 19 year old Double Yellow Headed Amazon parrot that was relinquished by his owners to an animal shelter. Sunny was gotten out of the shelter by another parrot rescue organization and transferred to us. Sunny is a TOTAL LOVE! He has chronic arthritis which makes it difficult for him to stand, grasp with his feet, and perch normally. Sunny needs a special home that can address his special needs.

Diamond Jim: DJ is a Diamond Dove. Diamond Doves are EXTREMELY SMALL birds about the size of parakeets. They are native to Australia. DJ was found in someone's backyard and brought to us for care and rehoming.

The Princess: Princess is a Princess of Wales Parakeet recently bailed out of a local animal shelter. She is still in quarantine but will be availale for adoption in a few weeks.

Japanese White Eye: Now named Ema and adopted into an incredibly loving and knowledgeable home. Japanese White Eyes are not native to North America. There are a number of them living and surving in the wild in Orange County CA. Ema was found as a baby and raised by a very kind man and then on to find an incredible home as a pet.

Pin-Tailed Whyday Nestling: Pin-tailed Whydahs are another non-native species now found here in Southern Caliornia. We raise them and find them homes as pets or aviary birds.

Shakespeare: Shakespeare is a Scandaroon Pigeon. He is a show breed of bird and has been adopted into a wonderful aviary home with other pigeons.

We take in many diverse types of birds and are grateful to all of you for supporting our efforts! Thank you! 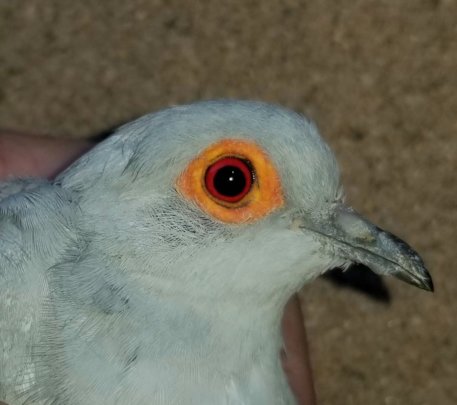 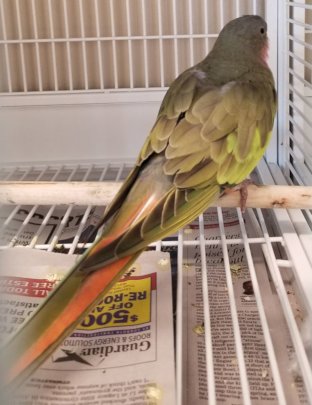 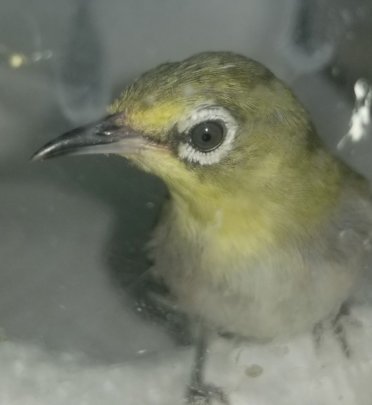 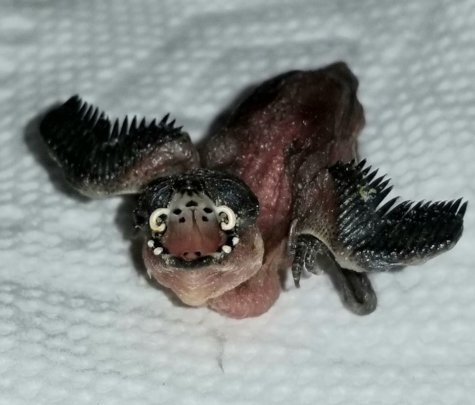 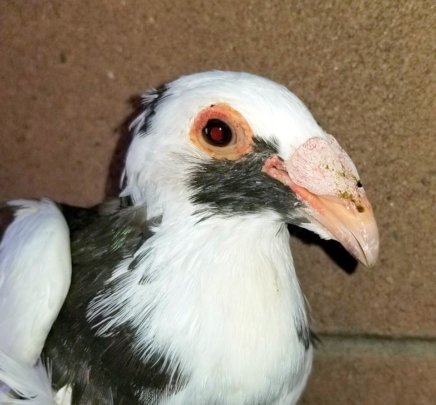 Shakespeare
‹ 1 2 3 4 5 6 ›
WARNING: Javascript is currently disabled or is not available in your browser. GlobalGiving makes extensive use of Javascript and will not function properly with Javascript disabled. Please enable Javascript and refresh this page.