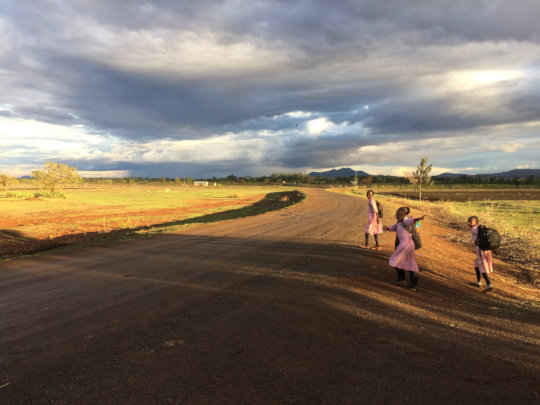 A long walk home for some pupils

You recently received our September 2019 Newsletter giving an update of the highlights and main points of interest for 2019.  Apologies if this GlobalGiving update seems to be somewhat of an ‘overload’ but the GG platform requires that we update supporters every three months on projects that we are working on.

So, we are coming to the end of the school year for 2019 and next week will see the close of Term 3.   We will finish the year with 102 pupils of which we are pleased to be sponsoring 72.

Most of our children live in the surrounding small villages with a few from Murang’a town, but we have broadened our catchment area and now pick up children from as far away as 11kms from the school, an area where the choice of schools is limited.    There is still a 4km walk for these children to get to the pick-up and drop off point but they have no complaints and are happy to complete the journey on foot.

We still have 16 children on our list to be sponsored so if you are interested in sponsorship or know anyone who would be happy to do so then please let us know.

This year has seen many improvements both in terms of academics, staff development and expansion of the school.  Not least improving the comfort of children and reducing the environmental footprint of the school.

The first, and perhaps the most important, initiative was to double the class ceiling to reinforce the thermal insulation. This is important because the roofs are made of corrugated sheet metal, which warms up very quickly in the afternoon under the effect of the African sun, and which then radiates heat on the heads of students (and teachers), making their concentration difficult.

The simple solution was to nail plywood planks just under the roof; the result was immediate, with a reduction of several degrees of heat in the classes that were equipped. Teachers and pupils are pleased with the results and productivity has increased.

Another major improvement was to the way meals are prepared in the school kitchen. The fuel used for cooking is, as is very often the case in Kenya, wood, the intensive use of which for food cooking is a major contributor to deforestation.Thanks to the financial support of American missionaries, the school was able to acquire efficient stoves. The result: a wood consumption divided by two, and a reduced environmental footprint.

We continue with our mission to help the elderly grandmothers and our Elderly Ladies Group received two lots of donations of maize and beans this year.  A week before each of the two rainy seasons we call the ladies to the school for a small lunch so they can socialize and catch up on all the news and to donate a bag each of maize and beans for planting.  We are currently in the midst of the long rains and it promises to be a good harvest as rainfall is consistently heavy throughout.

These are exciting times in Kenya as the Ministry of Education has made radical changes to its Curriculum, which has not changed since 1985.  The new Competency Based Curriculum (CBC) is good news for pupils as it concentrates more on a child centred approach to teaching. Roko 20 has made a good start on the new CBC and teachers are working hard to adapt to the new system.  We are pleased to report that after completing our own research we found that we are much more active with the new CBC than other schools in the local area. Next year places emphasis on improving teaching methods with in-house teacher training to fully deliver the new CBC.

These improvements, simply put, would not be possible if it wasn’t for faithful donors like you.  So a big thank you for supplying the funds that we need to make a difference in the lives of our pupils who would not benefit from such a good full time education in a safe and supporting environment. 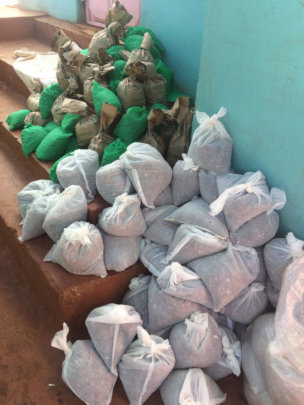 Donations of Maize and Beans for the Elderly 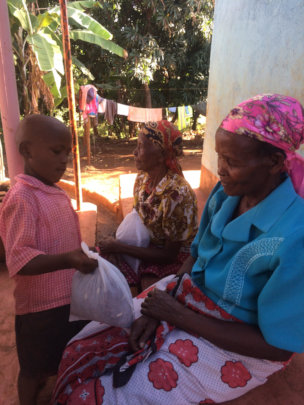 Daniel from Pre-Primary 2 handing out bags of seed 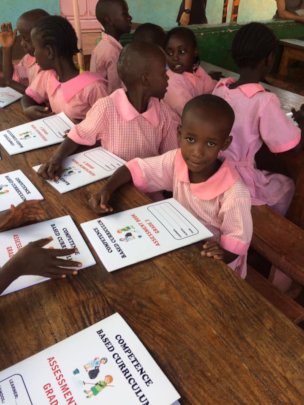 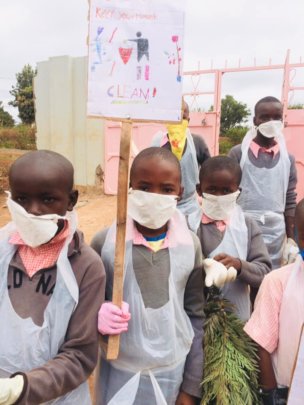 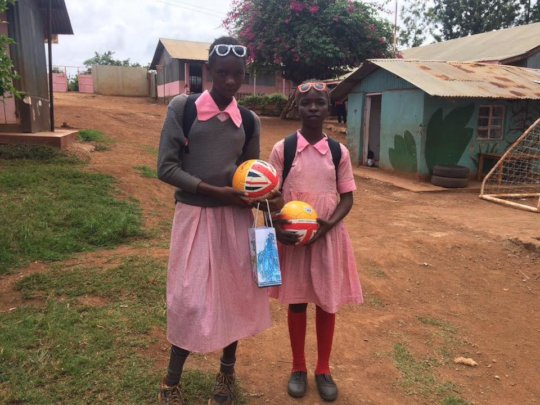 Here follows an update from Roko 20 Academy as we approach the end of Term 2.

As the year progresses, we are pleased to report that the performance of our pupils has improved dramatically.

During the County games, two of our Class 5 girls qualified and played handball for the winning team.

Our Debating Club has done extraordinarily well and, whilst it started with debating at our neighouring school, word has got around and now other local primary schools have shown an interest in debating with us. We have some bright and confident pupils from Class 4 and 5 who put up a good case expressing themselves in English.

There have been major improvements not only in academics and behavior but also in cleanliness. It’s no mean feat for children to keep clean whilst playing in the playground at breaktimes. It is literally a dustbowl during dry season. Handwashing is encouraged and a ‘white’ towel and soap is provided at the water tanks. A Soap Monitor is on duty to ensure the soap bottle remains topped up. Hands are washed before entering class in order to keep their books clean.

Recently cut off from the town’s water supply for almost two weeks we thanked our lucky stars to have remained with a constant water supply due to the large water storage tank kindly donated by Narberth and Whitland Rotary Club.

All this progress would not be possible without the commitment from our team of teachers and staff who are working together as a team to get the best out of our pupils.

After a rigorous academic first half to the year, our pupils and staff got to spend some well-deserved time enjoying an educational trip. Upper classes visited the Mwea Irrigation Scheme and Sagana Tanneries, followed by some adventure playground fun and a dip in the swimming pool. The younger two pre-school classes and Class 1 and 2 had an interesting nature walk near Thika where they met with porcupines, crocodiles and ostrich to name just a few. Following this they had the most exciting time on the rides at an adventure playground finishing off with a very cold dip in the small paddling pool.

As you can see the school is going from strength to strength. We couldn’t be more grateful for your support. 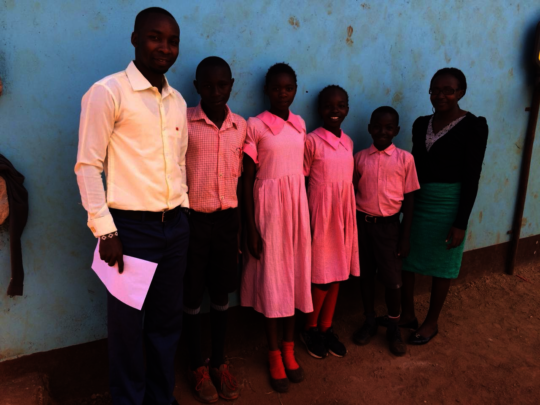 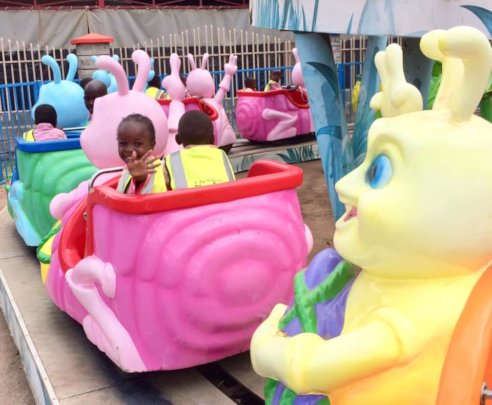 Fun at the fair 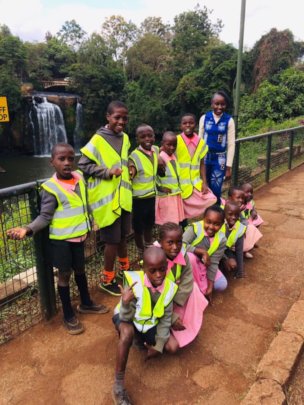 Class 2 at the Waterfalls 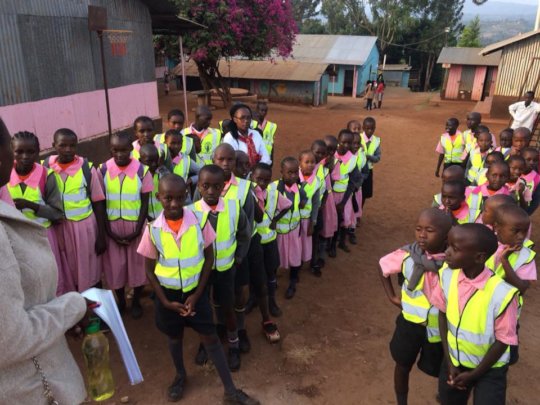 Upper classes excited to be going on the trip 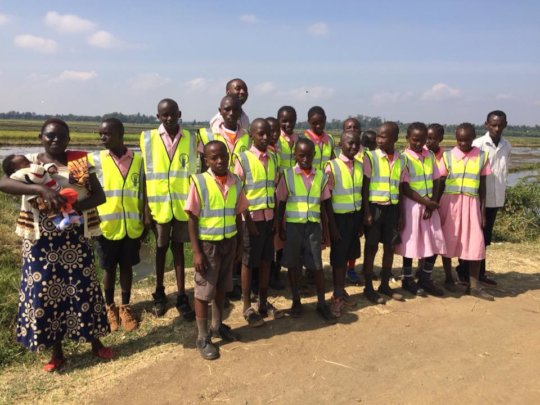 Report on the Roofing Insulation 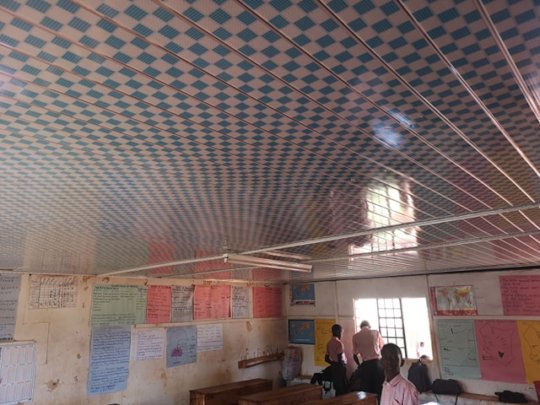 We asked for help in funding the ceiling insulation of our classrooms which, due to the corrugated iron structure of the classrooms, became unbearably hot during the day.

We were absolutely delighted with the response we received from you as we more than matched our target.

Ceilings in each of the classrooms were installed and it is significantly reducing the amount of heat released into the class.  Our teachers and pupils are now experiencing a comfortable temperature within which to work.

In addition the insulation has has also helped to reduce the noise level.

Thank you so much for your support.  We are so grateful for your generosity. 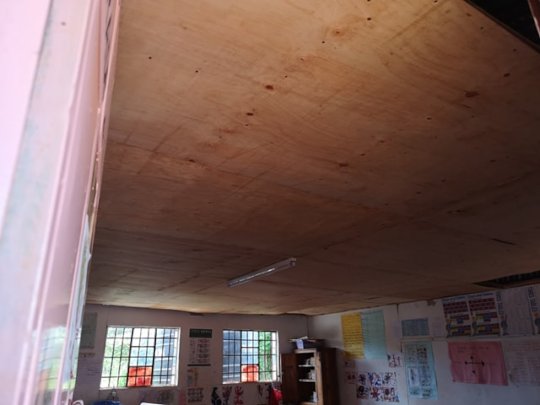 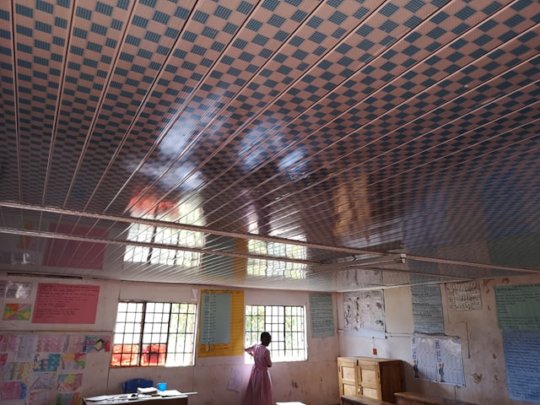 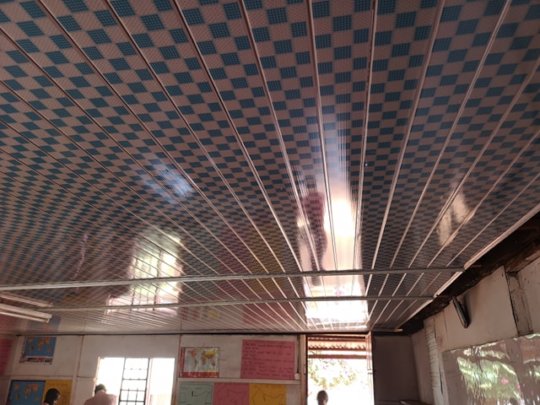 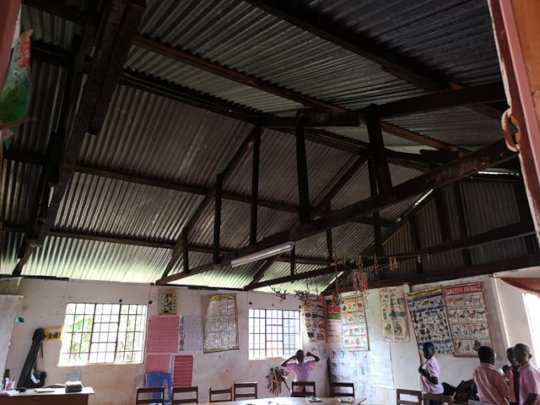 Classroom before the insulation