A New Life for Thoa and her Baby Boy 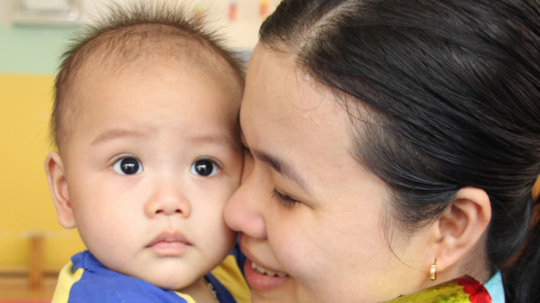 Thank you for your support of children of factory workers in Vietnam. We hope you enjoy this story about a young mother’s determination to forge a better life for her son. We look forward to bringing you future reports from our work in Vietnam.

When Thoa was 20 years old she moved to Da Nang, which is far away from her hometown in Nghe An Province. In Nghe An, the main industry is farming, but there is always a risk of damage to the crops during the four-month rainy season. At first Thoa’s transition to the big city went smoothly when she found work at a toy factory in Hoa Khanh Industrial Zone, one of the six largest industrial parks in Da Nang.

Then Thoa met her future husband, Hai. Though Hai was unemployed, and they had been dating only a few months, the couple decided to get married so Thoa’s 75-year-old mother, who was very ill, could attend the wedding. However, Hai’s parents said the couple could only marry if Thoa ensured a grandson by getting pregnant.

Soon after Hai’s family gave that ultimatum, Thoa became pregnant. Although both families are poor and Thoa’s income from the factory is low, she saved carefully so she and Hai could travel back to her hometown for an engagement ceremony and to welcome her baby, who she had learned would be a son.  Though she was excited to be having a baby, Thoa by then had realized that Hai is an alcoholic, but she was hoping that after their baby was born, he would stop drinking and finally find a job.

Her hopes quickly faded when, one day, Thoa was rushed to the emergency room of a nearby hospital for treatment of a pregnancy-related illness. She called Hai, asking him to buy a thermos bottle for her so she could save money by making instant noodles instead of eating expensive hospital food. Hai promised to bring a thermos bottle to the hospital, but he never showed up. After a few hours, Thoa was very hungry and at first relieved when she finally reached Hai on the phone, but then he quickly confessed: “I’ve spent all my money on alcohol. I don’t have any money left to buy you anything.”

It was at the moment, lying in a hospital bed, that Thoa decided she would raise her son by herself, without any help from Hai because she didn’t want her baby to grow up and become like his father. When Thien Bao was born on Christmas day, Thoa looked at her newborn baby and vowed she would do everything she could to provide the very best for her child.

Still Thoa’s vow hasn’t proved easy to fulfil without help. Hai has never attempted to contact her or meet his son. Neither have his parents and, sadly, Thoa’s mother died before she could meet her grandson. That left Thoa to take care of her newborn and her 85-year-old father, Nam, whose health is failing. When Bao was five months old Thoa had no choice but to put him into a home-based care center so she could go back to work to support the family.

Then Nam fell and became bed-bound after his accident. The entire provision for the family of three fell on Thoa’s shoulders, on her meagre factory salary of $135 per month. Because she spent over half of her monthly salary on Bao’s day care, Thoa could only afford to rent a tiny 15-meter square room… just enough space to fit one bed for the whole family to share. The family’s cramped quarters mean that the bed is where Bao plays, sleeps, and eats.

At his home-based day care, Bao was also left in a crib most of the time because there was only one caregiver to look after eight children, all under three years old. Given the lack of stimulation, Thoa became very worried about her baby’s well-being. One day, when sharing her concerns with work colleagues at the factory, they recommended the OneSky Early Learning Center (ELC) where other working parents said their children were thriving in a safe, loving, and nurturing environment at an affordable price. “That seems too good to be true,” was Thoa’s first reaction.

Still Thoa decided to apply.  Bao was offered a place at the ELC when he was 8 months old. Any doubts about Bao’s being the youngest child at the ELC dissipated the first day she visited, seeing first-hand the facilities, love and energy of the staff: “When I walked through the door, I was instantly relieved,” says now 34-year-old Thoa. “I knew with OneSky, my baby would be well looked after.”

The fees at the ELC are less than half of what Thoa was paying at the home-based day care and due to Thoa’s precarious financial situation they have been reduced further, which means she only has to pay $9 a month. Thoa now has more money left to buy food for her baby and medicines for her father.

More importantly, Thoa knows that her beloved baby is receiving the care she always dreamed she could give him. A once quiet and passive child, Bao has grown into a happy, smiling baby who can play on his own—his favourite toys are the shakers the ELC teachers make from recycled tin cans. OneSky-trained Teacher Tinh joyfully recounts Bao’s transformation: “I remember seeing Bao pull himself up for the first time with such a proud smile. When I held his hands and helped him walk a couple of first steps, I understood how seemingly little nurturing gestures really can dramatically improve someone’s life. Bao is a very smart and loving boy.”

*To read more stories about the work that OneSky does, please visit the story page on our website! 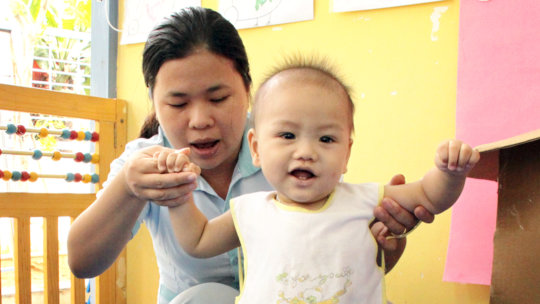 The Magic of Rainy Day Learning 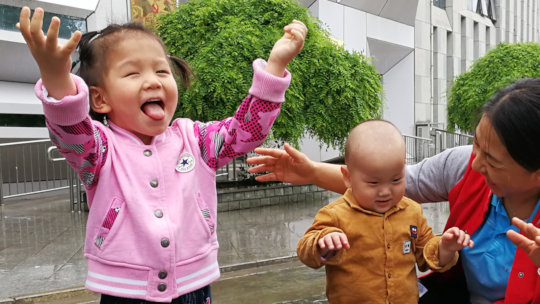 Thanks to supporters like you, many children residing in orphanages are eventually placed in a foster home through our Loving Families Program. Until then, they receive lots of love and nurturing by their caregivers, as well as educational stimulation through our Preschool Program. In fact, many children—even after being placed with a loving family—continue on in the Preschool Program. Read on for a special report about how a rainstorm in China became an unexpectedly fun outdoor lesson for some orphanage preschoolers…

Yufei was first to notice it.

Why does it rain? What does it feel like? When will it stop?

Lessons paused, and dedicated teachers decided the best way to learn would be for the children to experience the rain for themselves.

Yufei led the charge outside, with the other children following happily behind her. The rain felt magical! The children listened, mesmerized, as their teachers pointed towards the sky, answering all their questions about how rain is made.

They were having such a good time, they were reluctant to return to their classroom after their  rainy day lesson was over, wanting to catch just a few more drops. But, it being rainy season, the quick thinking teachers promised the children they could splash in the puddles again soon!

Children like Yufei are often abandoned as babies. In the past such kids commonly suffered development problems due to a lack of love, fun and learning. They were never held, they didn’t learn, they didn’t ask questions.

OneSky trained early childhood educators blend responsive care with local kindergarten standards. Their care is designed to prepare the children to develop intellectual curiosity and a love of learning, succeed in community schools, and attain a positive sense of self so often missing in institutionalized children.

This environment of love, hugs and happiness means these children grow up attentive and engaged and knowing how to form relationships. Through the preschool program, experienced early childhood educators are taught a unique and progressive curriculum that blends responsive care and some elements of Italy’s Reggio Emilia approach to early childhood education with local kindergarten standards. The program is designed to prepare the children to develop intellectual curiosity and a love of learning, succeed in community schools, and attain the positive sense of self so often missing in institutionalized children.

Click here to read more stories about children served through our Orphanage Program! 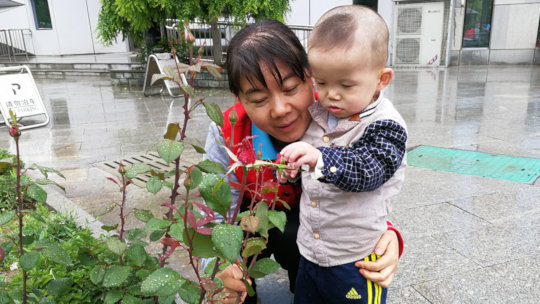 By Jenny Bowen - Founder & CEO, OneSky for all children 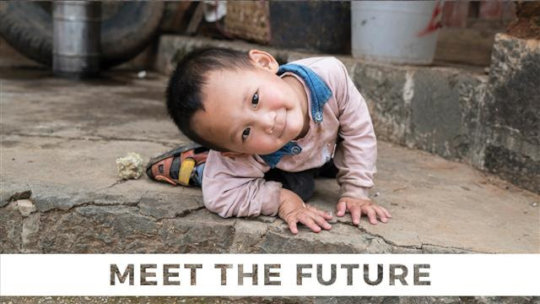 Thank you for supporting our village model in rural China! We hope you enjoy this report about a little boy named Linhao. Like so many in rural China today, Linhao’s grandparents had the double burden of trying to survive on near-worthless land while struggling to raise an active toddler whose parents are far away from home...

When Linhao’s grandma got sick and died, his grandpa was faced with a terrible dilemma. Might he have to send his little grandson away? But as China now tries to improve the situation for grandparent-caregivers and the children of migrant workers, OneSky is becoming part of the solution...

Stories like Linhao’s are all too common in China’s rural villages today. Grandparents have the double burden of trying to survive on near-worthless land while struggling to raise active small children whose parents work in faraway cities. Many age and die prematurely, in some places up to 10 years earlier than their urban contemporaries.

China is now trying to improve the situation for grandparent-caregivers and the children of migrant workers by establishing “children’s homes” in rural villages. These are not orphanages, but rather more like village community centers where children and their families can receive support services. Happily, OneSky’s Village Model already features a Family Center, a community gathering place for children and caregivers.

Now, thanks to the visionary support of a corporate sponsor and with the help of our dedicated donors, we’ll be able to work toward meeting both the government’s goals and ours, by expanding the Village Model to more villages in more provinces over the next few years.

*Linhao’s name has been changed to protect his privacy. His story is based on the experiences of children OneSky serves. To view a video about his story on our website, go to this link: https://onesky.org/meet-the-future-linhao/

‹ 1 ... 3 4 5 6 7 8 9 10 ... 30 ›
WARNING: Javascript is currently disabled or is not available in your browser. GlobalGiving makes extensive use of Javascript and will not function properly with Javascript disabled. Please enable Javascript and refresh this page.