A Village Teacher - "Everybody's welcome in this classroom!" 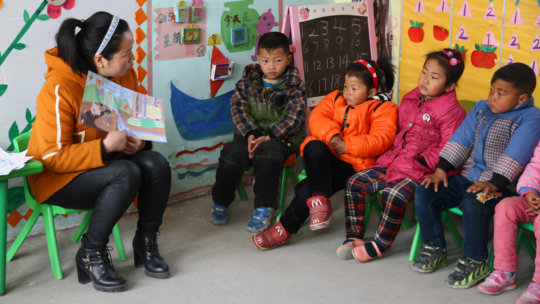 Thank you for supporting our work on behalf of children of migrant parents in rural China! Here is an update about a very special teacher in our village program.

Li Xiyan has been teaching in a OneSky preschool for more than a year during which she’s learned that education in China’s rural villages is a family affair.

Xiyan herself grew up in a big family in a nearby village where she still lives with her extended family— her husband and four-year-old daughter, plus a grandmother in law, parents in law, and sister in law. When OneSky came to her village to recruit, Xiyan jumped at the chance. One reason was her little daughter. “I didn’t know how to educate her well,” she says. “I wanted to learn.” Xiyan’s previous training as a bridge crane operator and in a steel factory had been far from a preschool classroom.

But once Xiyan began working with OneSky’s Teacher Trainer Du Xiurong, she was on her way. “I told myself there was nothing I couldn’t do if I made up my mind.” Soon Xiyan walked into her first classroom. She had learned how to observe and help children, how to establish emotional ties with them. “I had learned to be patient and persistent and to never give up on a child.”

Still, on her very first day in the classroom, back in April 2015, Xiyan recalls, “I was so nervous I almost forgot what to say! My voice was shaking.”

Within a couple of weeks, with the support of other teachers, Xiyan had overcome her nervousness, and was feeling comfortable with her class of 20 five and six year-olds. “I knew I needed to make the children feel how much they are loved. I also learned that to be a qualified teacher, I had to feel confident about myself.”

Although she has a daily teaching routine, Xiyan has learned to be flexible, because there are always surprises. She plans her lessons the night before, and comes early in the morning to clean and organize her classroom so everything is sparkling and ready when the children file in.

The day begins with morning exercises, to get all the children moving and energized. Then, before organized activities, the children have some free time—to greet each other, settle in, maybe choose an activity they would like to try later. All the while Xiyan observes each child, making sure everyone is participating happily, watching to see if any child seems troubled, or if anyone isn’t feeling well.

Morning lessons in math, reading, and writing follow, with breaks for snacks and group discussions. There’s also drawing and singing, and time outside to play with friends and run off steam. Xiyan says the children love going out of doors, so she plans time outside whenever she can. In spring, the children love to plant watermelon and sunflower seeds, tend them, and then watch with excitement for the first green leaves to appear.

Whatever the activity, Xiyan pays close attention to each student. When a new child, a very quiet little boy, came to class, Xiyan asked what he would like to draw. “A tortoise,” the boy answered, so Xiyan set him up to do that. After he finished, she gently asked him about his drawing, but he didn’t want to talk about it. She noticed that he listened carefully, though, and she was confident he would open up, given time and attention.

A harder challenge was posed by the adults. At first, some of the village parents and grandparents found the school activities hard to understand. When they saw a group of children outside watering plants, for instance, it didn’t look like the kind of school activity they were used to! And shouldn’t the children be writing Chinese characters and not drawing tortoises?

Xiyan’s answer was to invite the adults to come to school, too. “They thought the children just played all day, and I began to feel frustrated.” Because most of these children are left-behind children, whose parents are away in the city working, it’s the grandparents who send them to school. So she invited the grandparents to come try out the school themselves. This way they could get an idea of the daily routine.

“What’s even better,” says Xiyan, “they could see their children’s happy faces and see how much they were learning and growing.” After the classroom was opened up, some of the grandparents put aside their farm work and accompanied the children to class and even did handiwork with the kids. The result was that they gradually accepted the OneSky approach.

“This made me very, very happy,” says Xiyan. “Before our preschool opened, most children had studied outside the village. But now more and more families are bringing their children here to study.

“Every day is a brand new day for me,” says the young teacher. “I always want to improve and help the children more. My happiest moments are when the children are happy.”

And here’s something really interesting, she adds: “I’ve noticed that the grandparents have changed. When they came to school to pick up their children their first question used to be, ‘Do you have any homework today? You better get started!’ Now, they say, ‘Did you have a nice day at school today? What was your favorite game?’

“They see how much the children are learning, and how much enjoyment they are having at the same time. That makes me very happy, too!” 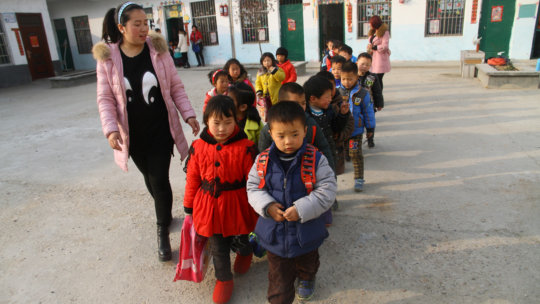 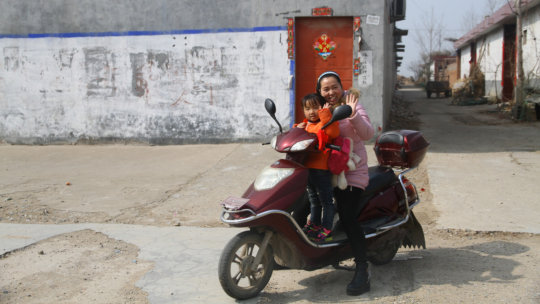 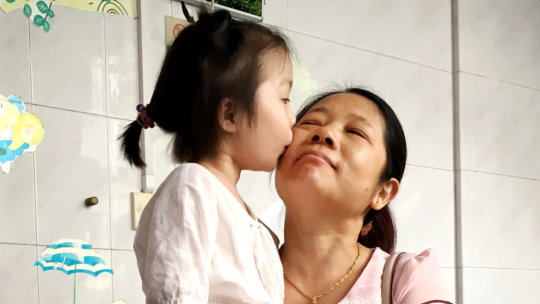 Thank you for supporting our Loving Families Program! Enjoy this story about two siblings and the new family they found…

Not all children who spend their days in China’s welfare institutions are orphaned.

When Yuli and her little brother Yuping’s parents were sent to prison, no relatives stepped up to care for them, and so they arrived at the orphanage. Children belong in families. An orphanage, no matter how well run, is never a good place to grow up—but especially not for children who have only known family life. Until they were able to join OneSky’s Loving Families program, Yuli and Yuping had a difficult time.

When the siblings first arrived at the institution they were inseparable. Yet as they spent more and more days apart, grouped with orphanage children their own ages, they became increasingly distant with one another. Yuli especially began to pull away from her brother.

“We could see that her estrangement from her brother was growing deeper and deeper,” said Yuli’s OneSky preschool teacher.

Yet, unlike a lot of her peers at the Guangzhou orphanage, who have no memory of ever having a mother or father, Yuli not only remembered her parents—she did so happily.

“I once lived by the riverside with my mom, dad, and little brother. I went shopping with my mom and she would buy me nice food…but one day mom and dad did something wrong and got arrested by police,” she told Teacher Huang.

Yuping, meanwhile, was often ill and anxious, constantly looking for his big sister. Unlike her, he never mentioned his former family life.

OneSky made an urgent appeal for funding so that the children could be reunited in a family—even if not the one they were born into.

Our pleas were heard and permission was granted to add a new family to our small community at the orphanage. After several rounds of interviews and introductory training, Mr. and Ms.Tang became the new foster parents of Yuli and Yuping. Not only did they welcome the young siblings into their hearts, but they also agreed to accept two more children, Boliang and Jinlei. To ease the transition for all involved, the siblings were introduced to their new family earlier than Boliang and Jinlei.

The new Tang family settled into an on-site furnished apartment provided by OneSky and the orphanage. After school, their foster mother is always there, with a smile, waiting to pick them up.

When Yuli and Yuping first came to their new home, they seemed ill at ease. But after they had some lunch, drew pictures, watched TV, played games, and went out shopping for new clothes together, the children began to relax. Before too long, the siblings were calling their foster parents “Mom and Dad.”

As the foster parents spent time, not only providing emotional support for their new children, but teaching them practical skills (such as learning how to do chores), something truly unexpected happened. Yuli began to take care of her little brother by pouring water for him, playing, and sharing snacks with him.

She was starting to act like a big sister again!

One evening, Yuli woke up during the night, asking to sleep with her brother. Watching the two siblings get all snuggled up in bed under the covers together, their new foster parents couldn’t help but be overjoyed.

In preschool the next day Yuli happily bragged to her friends that she now had a family. She also said she couldn’t wait for her pals to come over to play at her new apartment. Now, the OneSky team decided, it was time to bring Boliang and Jinlei into the family.

Born in Africa, Boliang could not speak a word in Chinese when he was brought into the orphanage a couple years before. His parents, like those of the siblings, had been sent to prison. Little Jinlei, the fourth new addition, has Down Syndrome and was abandoned by parents unable to care for him.

After school on that first day, on the walk back to their apartment, Yuli protectively took hold of one of little Luping’s hands. They walked like that, all the way back. An older sister and younger brother, holding hands—just as they had when they first arrived at the orphanage.

But it didn’t take long for all four children to accept each other as part of the family, just as if it had always been that way. Little children are remarkably resilient when they know that somebody cares. 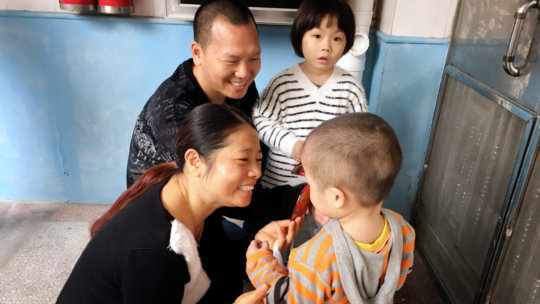 Our Paradise in the Woods 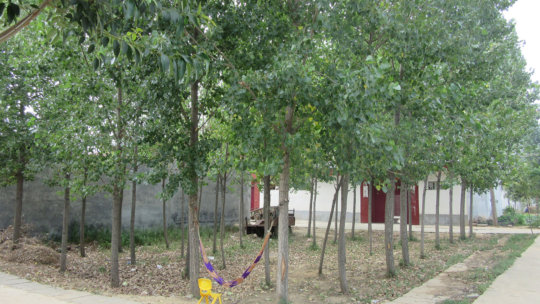 There are three components to OneSky’s model for children in villages and each is equally important: the early learning center, family skills training for caregivers, and community engagement.

It’s not easy to find ways to heal rural villages disrupted as young parents leave home to seek work in distant cities. Our community engagement team seizes every opportunity. In one village, they enlisted the help of OneSky preschool teachers and family mentors and managed to bring the whole community together to create a summer paradise for the children.

The plot of land they chose was one frequented by villagers seeking a bit of shade on hot summer days. When they approached the landowner with their idea, he was so enthusiastic that he broom-cleaned the whole area himself.

“It is such a good deed you are doing!” he said. “I’ve never known anyone who would make every effort to help our children just like that. I’m happy to do my part. This place will become much livelier when the children play here.”

By the time the sun rose next morning, word had spread. Villagers arrived from every corner, lugging sand, tires, timber and rags – whatever they could find to contribute to building paradise.

And everyone pitched in to help. They made sandboxes and play structures and tunnels from woven rags. The children couldn’t wait. They were underfoot everywhere.

“Let them help,” our preschool teacher said. “They will learn that they are an important part of our community and that they can make a valuable contribution too.”

“What a happy place our village has become,” said one grandma.

“That’s all we have to give them,” said a grandpa.

“That is enough,” the teacher said. 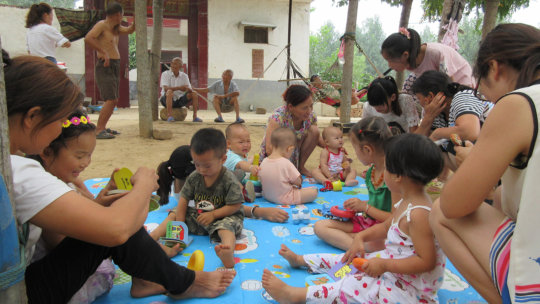 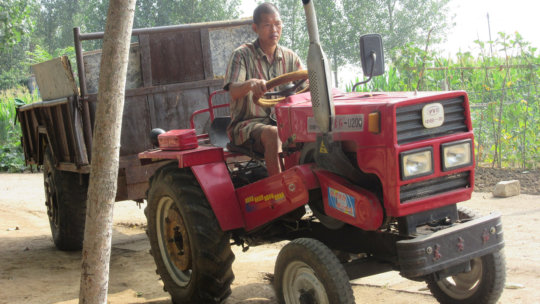 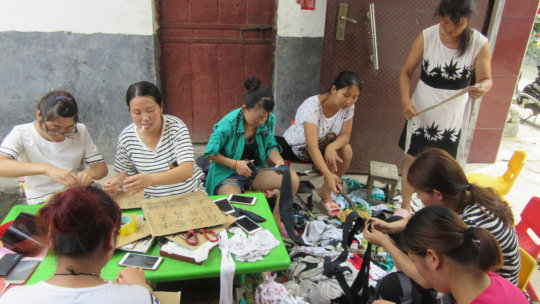 ‹ 1 ... 9 10 11 12 13 14 15 16 ... 29 ›
WARNING: Javascript is currently disabled or is not available in your browser. GlobalGiving makes extensive use of Javascript and will not function properly with Javascript disabled. Please enable Javascript and refresh this page.