Anyun, Abandoned but not Alone 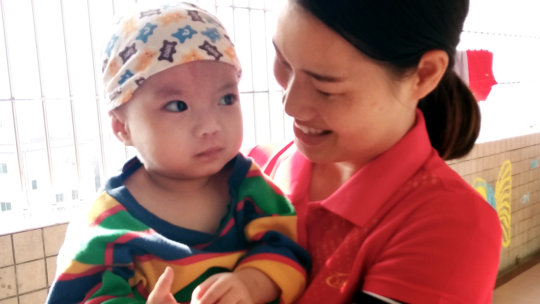 Thank you for your support of our children in orphanages and their subsequent placement in our Loving Families Program! Enjoy this story about little Anyun, who will soon be old enough to begin preschool and be placed in a foster family…

Today, Anyun is a happy young child, nearly three-years-old and about to begin preschool. She currently lives in an orphanage in China and will likely soon be placed into a foster family through our Loving Families Program.

Things are looking up for Anyun, whose story really began as a baby whose biological parents probably did the best they could, but were simply unable to care for Anyun. Sadly, Anyun’s story is the story of some 95 percent of the children now living in China’s welfare institutions, who are suffering from issues such as cerebral palsy, heart defects, and other challenges that require expert care.

Most of the children, including Anyun, were likely abandoned not because their parents didn’t love them, but because, due to lack of time and soaring medical costs, they were unable to provide the intensive care such children require. “I could tell that Anyun’s biological parents loved her very much, because she was very clean when she was sent to the orphanage,” says Xiamei, Anyun’s devoted caregiver.

Still, as a toddler, Anyun could not have understood the reason behind her parent’s painful desertion. All she knew was that she felt very frightened and alone. When Anyun first arrived at the orphanage she refused not only to speak or attempt to stand, but also to eat or play with any toys. “She was looking at the world with her vacant eyes full of fear and mistrust,” observed Xiamei, who began to care for Anyun the day after she arrived at the orphanage.

Fortunately for Anyun, Xiamei had been trained by OneSky’s Special Education Department so she has the specific skills needed to work with children with special needs. From the moment Xiamei took charge of the distraught little girl, she began giving her individualized attention, physical therapy, and, perhaps most importantly, mega doses of tender loving care.

Xiamei sang soft lullabies to soothe Anyun and during meal time cheered whenever she ate something, no matter how little. After only a month, all of Xiamei’s efforts on behalf of Anyun began to pay off when she started responding happily to Xiamei’s daily kisses, cuddles and singing.

One day, Anyun began to show interest in the toys at the orphanage. Xiamei smiled when she saw this, because she knew Anyun had finally begun to explore freely in a safe environment. She even started to speak a bit, uttering some simple syllables such as “ah, ah” and “yi, yi.” Teaching Anyun how to walk on her own, however, proved to be a much harder endeavor.

Xiamei massaged Anyun’s legs for a couple of months: “I was trained to do massage for children with cerebral palsy, and I did it for Anyun every day,” says Xiamei. Then, holding on to Anyun’s hands, Xiamei would help pull her to a standing position, hoping she would eventually try to stand on her own.

But Anyun was resistant — she refused to straighten out her legs. Still, Xiamei patiently persisted, and, after many more training sessions, Anyun was eventually able to stand up on her own!

“I was really taken aback, opening my mouth in amazement for a couple of seconds,” said Xiamei of that remarkable moment for Anyun. “All of the nannies in the playroom applauded for her.”

Today, just one year later, Anyun has begun to walk on her own and has grown into a smiling, good-natured three-year-old, who likes to play peek-a-boo and look at pictures on the wall with Xiamei. She has also become a much better eater, especially of congee (a thick rice porridge) served with meat. Sometimes, after Xiamei puts a hairpin in Anyun’s hair, she will go to the mirror and look at herself, happily.

Everyone at the orphanage agrees that Anyun has come a very long way from the frightened little girl who arrived at the institution clinging tightly to her sole possession—a blanket from her parents. “Now she is able to walk and wander around. I’m glad she is able to enjoy the freedom that her feet bring her!” said Xiamei. 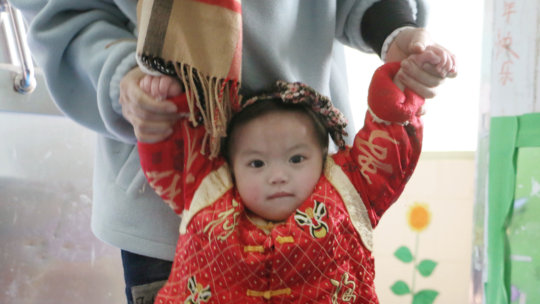 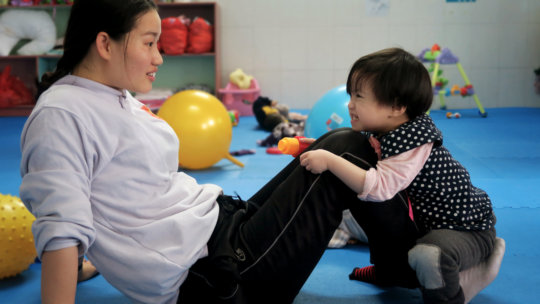 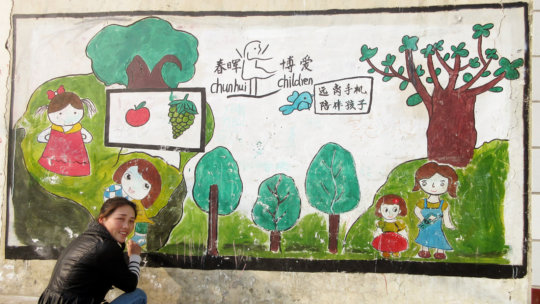 Thank you for supporting our work on behalf of children of migrant parents in rural China! We hope you enjoy this update about some beautiful new murals in our village program.

OneSky Family Mentor Liu is very comfortable welcoming children to our Family Center and visiting families at home, but she was a little nervous when she first picked up a paint brush…

Liu’s scary artistic endeavor was painting colorful murals on the walls of houses to let passersby know about our new programs for the children. After the first house gave Liu and other Family Mentors permission to paint, she took a deep breath and dipped her brush in a brand new bucket of paint. “Right away, we experienced the hardships of painters!” says Liu. “The paint flew everywhere!”

As the little group was splashing away, an older man wandered down the path and offered to help because, he said, “The children at the OneSky Family Center are developing very well. They are more confident, optimistic, and lively.” With great enthusiasm and confidence, he went to work, saying, “Just leave it all to me!” Soon they decided it was time to get a little bolder. “We drew a house and a green leaf,” says Liu. “The day just flew by.”

The next day when Liu showed up to paint, some villagers were already there wanting to help. “I was surprised,” says Liu, “but I learned later that a lot of parents wanted to help after hearing that the Family Mentors had been painting the walls. I was deeply moved.”

One of the new volunteers was a young boy, who dipped his brush in green paint and carefully painted some grass on the wall. “My younger sister goes to the Family Center,” he told everyone. “She’s become much more talkative and adorable. Therefore, I want to make my contribution.”

Thanks to all the volunteers, the murals became more detailed: one volunteer added grapes, another brushed in some flowers, another small figures of children, including one holding a balloon, and another a castle. When the walls were all complete, there were a few final touches, including some Chinese calligraphy to explain what the wall painting was all about.

When the last character had been brushed, Liu looked around at her fellow painters and realized they were all covered with as much paint as she was. “They looked like paintings themselves,” she says with a giggle. As everyone cleaned up, all the volunteer painters felt a deep sense of accomplishment, especially Liu: “As I walked home, I was so touched by the support of the villagers. It proved they value our work, and we were inspired to work even harder next year in order to repay them.” 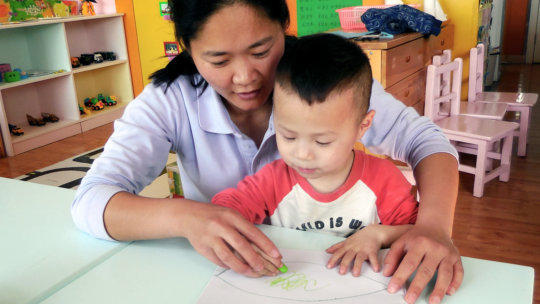 Thank you for supporting our Loving Families Program! Enjoy this story about a little boy whose luck changes for the better.

Shortly after midnight, on November 8, 2013, a passerby found an abandoned newborn boy wrapped in a blanket by the side of a road in central China.

The tiny baby, who weighed less than 7 pounds, was taken to the nearest orphanage where he was given the name Fudi (“Lucky Emperor”) perhaps in the hope that his luck would change.

By the time he turned three, Fudi’s luck had changed. After years of concern over a preliminary test that found Fudi might be infected with HIV, he had been given a clean bill of health. Then he began to become active and engaged in OneSky’s learning-rich preschool program. Even better, he joined Loving Families, our permanent foster care program, which meant that for the first time in his life Fudi has a family of his own — a mom, a dad, a sister and three brothers, including his best friend from preschool, Lejie. Now, at home and at school, Fudi follows his big brother Lejie wherever he goes and, just like millions of Chinese preschoolers, loves to watch his favorite cartoon program Boonie Bears.

Still, there are times when Fudi’s behavior reminds his foster mom, Aiqing, of his unlucky start. When he first became part of a family, Fudi would hoard food in his quilt at night — noodles, eggs, apples, steamed bread, peanut skins. Aiqing’s response to this child who feared he would never have enough to eat, was to have him sleep with her for a time, which broke him of the habit.

As for his behavior, sometimes Fudi’s mom thinks his name is apt because he acts like a little emperor, demanding to be the first one served rice and lording it over his toys. Fudi carefully stores his toys in his own special box, but he won’t help tidy up anything else unless he is asked several times. If another child takes away anything he is playing with, he runs complaining to his mom.

To a certain point, Fudi’s mom indulges him because she knows that most children have to be taught how to share and she also believes that an abandoned child can never be loved too much. But that doesn’t mean that Aiqing or her husband Baoping give their little emperor a pass when it comes to chores.

One time, the hall of the building where they live on orphanage grounds was strewn with scraps of paper after many children in the building had been playing there. Aiqing explained: “Fudi, the janitor has to work very hard to make it clean. Would you like to help her by picking up the litter and throwing it into the dustbin?” Fudi followed her suggestions immediately. Then he smiled expectantly, waiting for his mom’s praise, which a beaming Aiqing provided immediately: “Bravo! You did a great job, Fudi!”

Now, even without reminders from his mom, Fudi has become more considerate. He takes home desserts from school to share, has learned more grown up table manners, helps with chores like handing out bowls, chopsticks and spoon and tidying up his classroom. He is also is the first one at the door to help his mom carry groceries from the market. Fudi’s development has also speeded up — the only area where he lags is speech. So Fudi’s teachers and mom have created activities and games that encourage him to speak and exercises like blowing paper to open up his diaphragm.

Though she is grateful for all of her son’s developmental and behavioral progress, Aiqing is most impressed by how loving he has become: “It really touched my heart the first time Fudi called me Mom.” And then there was the day that her son, now as lucky and indulged as any emperor, despite his language struggles, pronounced clearly and distinctly, “I love my mom and my dad. I am happy now that I have a mom and dad of my own.” 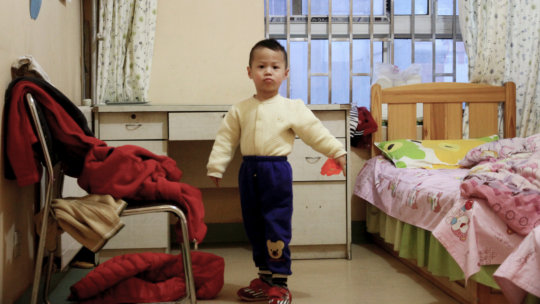 ‹ 1 ... 8 9 10 11 12 13 14 15 ... 29 ›
WARNING: Javascript is currently disabled or is not available in your browser. GlobalGiving makes extensive use of Javascript and will not function properly with Javascript disabled. Please enable Javascript and refresh this page.