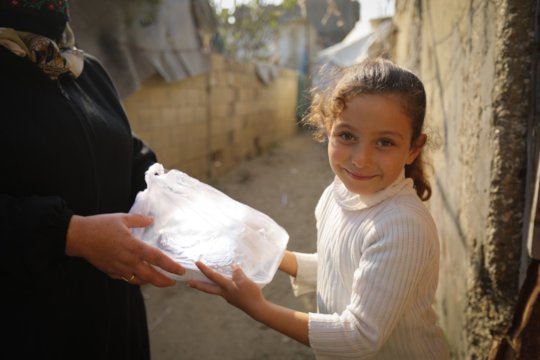 First of all, I would like to give a big shoutout to comedian, Michael Schirtzer, who posted about Mrs. Najah's Kitchen on his Instagram and TikTok. He galvanized over 100 new donors for Mrs. Najah's Kitchen and together raised over $10,000! This is wonderful news coming into the new year. Thank you to all who saw Michael's post and were moved to help. Welcome to Mrs. Najah's team!

Mrs. Najah will continue to serve families during the COVID-19 restrictions in Gaza. Women Programs Center Rafah (WPCR) has special permission as an NGO to deliver meals directy to families' homes. During our last October distribution, 2400 meals were delivered to neighborhoods all over Rafah. Mrs. Najah targeted families where breadwinners do not have a monthly fixed salary, and she and her team made deliveries at different areas every week: Oriba, Al-Malalha, Morag, Al-Shaboura, Tal-Al Sultan, Swedish Village, and downtown Rafah.

Watch Mrs. Najah's team at work in this video

The last two weeks were especially meaningful. For the third week, WPCR worked with Al Amal Association (another longtime Rebuilding Alliance partner) to deliver meals to families with disabled children. For the fourth week, meals were delivered to cancer patients in collaboration with local cancer organizations.

In November and December, there were only five days of deliveries overall because funding started to run out. However, they still delivered 1100 meals to households with widows, cancer patients, or senior citizens who can't afford their daily meals. Some of these families received deliveries because they came directly to the Center to ask for help. In addition, Mrs. Najah worked with a local NGO to deliver meals to orphaned children who live with their grandparents.

For Mrs. Najah, these meal deliveries aren't just a chance to feed people; it is also a way of checking on her beneficiaries' welfare so she can connect them to other resources in WPCR if needed. It's important to her that these families don't feel abandoned.

The next GlobalGiving disbursement will arrive on January 25th. Rebuilding Alliance can then begin the process of transferring the grant to WPCR so Mrs. Najah's Kitchen can resume deliveries at full capacity—600 families a week. Thank you for your donation and holding Rafah families in your light.

P.S. If you would like to cook like Mrs. Najah, author and chef Laila El Haddad has also joined the Mrs. Najah's Kitchen team. She has graciously shared a recipe from her cookbook, The Gaza Kitchen: A Palestinian Culinary Journey by her and Maggie Schmitt, published by Just World Books. Scan of recipe below. 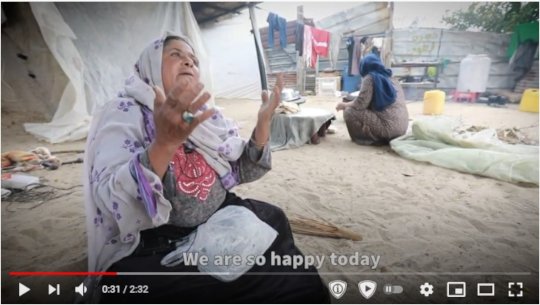 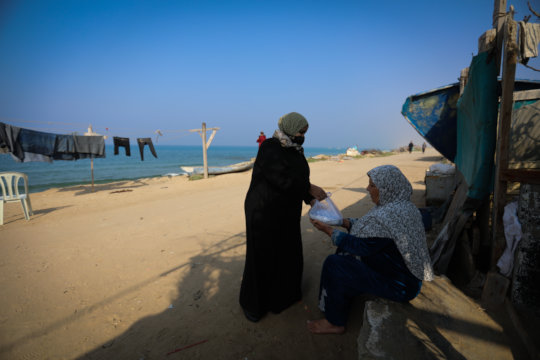 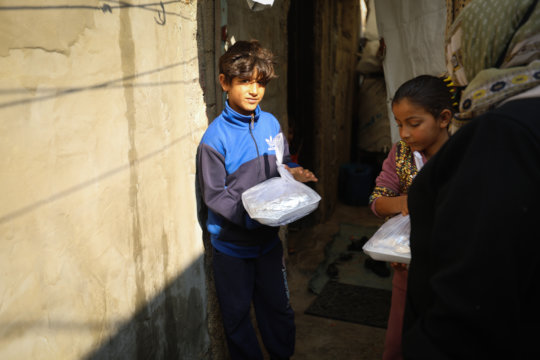 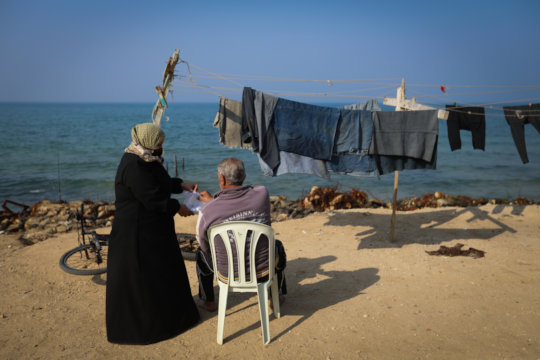 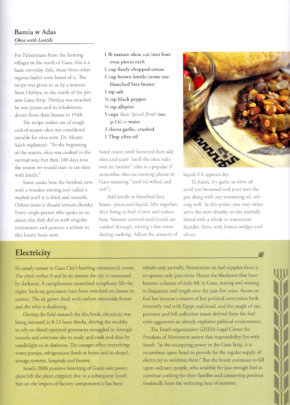 Update on our effort to safeguard Palestine 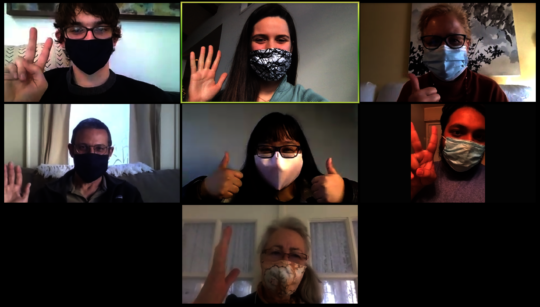 As 2020 comes to a close, I'd like to start off by thanking you for standing with us during such a difficult year. No matter what the next year throws our way, we know we will succeed with you by our side.

I joined the team first as a volunteer in June and I am now delighted to be coordinating the advocacy efforts as a member of Rebuilding Alliance’s staff. I wanted to update you now on our progress within our Movement to Safeguard Palestinian Communities.

Please note, Rebuilding Alliance pioneered this work in 2008 when, in desperation, we asked constituents to call Congress to ask them to personally intervene to keep the kindergarten standing in Al Aqaba Village. We had helped build it -- and those calls keep it standing.  This is not lobbying because legislation is not part of the request. Personal intervention by Congressional offices at the request of their constituents is the heart of this ask.

Advocating for the Sumarin Family

Back in June, Rabbi Arik Ascherman of the Israeli human rights group Torat Tzedek alerted RA about an impending court decision in the 30 year effort by the Jewish National Fund to evict a Palestinian family from their East Jerusalem home. The Sumarin family built their home in 1950, and since then, three generations have resided there. However, in 1989, the Israeli government began eviction proceedings using the controversial Absentee Property Law, even though the family was never absent! After years of lower court cases and appeals, the Sumarin family eviction case reached the Israeli Supreme court in August of 2020, and is now slated to be decided in April of 2021.

RA joined the Sumarin coalition to lead the effort to contact Congress on behalf of the Sumarins. We started by asking constituents to contact their members of Congress and invited them to a briefing with a team of 8 expert speakers from Jerusalem. Thanks to over 1600 constituent letters, we briefed 36 House and Senate offices on both sides of the aisle. Our request to Congress was for them to call the Israeli Embassy and State Department to stop the eviction. We also organized a virtual Leadership Learning trip to Silwan, which took constituents and Congressional staff on a walk from the Western Wall to the Sumarin family home.

Congresswoman Jackie Speier led a Dear Colleague letter to the Israeli Prime Minister urging him to stop the eviction. In total, she and 25 other Members of Congress signed the letter. During the up-coming months, RA will be preparing for the April court hearing.

This fall, our “Save the Olive Harvest” campaign started with a small British human rights group called the Friends of Madama and Burin who circulated a petition to the Israeli general in command of the West Bank urging him to protect the Palestinian olive harvest and olive farmers from aggressive Israeli settlers. With COVID-19, internationals couldn’t attend the harvest as monitors, and fearing what was to come, they asked the world to act from afar.

Rebuilding Alliance joined them, together with Palestinian and Israeli human rights groups, to bring our “Save the Olive Harvest” campaign to Congress. In response, constituents sent 1500 letters to their Senators and Reps, requesting intervention on their behalf. We held 45 briefing calls and two private virtual olive harvest tours with House and Senate Foreign Policy staff and constituents on the line. We asked them to call the Israeli Embassy and the U.S. State Department to investigate and prevent further violence. Many did — and the U.S. Embassy in Israel assigned staff to file a report. In the process, we also helped the Friends of Madama and Burin extend their reach by expanding our advocacy campaign toolset to include the British Parliament. This is just the beginning; the next step is to assure Palestinian farmers safe, year round access to their land.

The challenges facing Palestinians continue into 2021. Evictions, home demolitions, and vandalism to olive trees are higher than ever. Rebuilding Alliance will be drawing upon everything we learned in our advocacy for the Sumarin Family and the Palestinian olive harvest to launch our next Contact Congress campaign in January and mobilize American constituents to prevent further abuse and injustice. We're working through all the details to lauch a quick response constituent team, here and overseas, to ask Congressional offices to register concern the moment a 96 hour demolition order is posted. With a new administration and 60 new members of Congress, there’s hope for progress and all the more reason to press forward quickly in the year ahead. With your help, we will make a difference.

Thanks again for your trust in us. Stay safe. 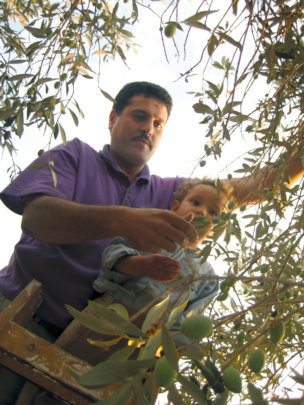 A father and son picking olives in the West Bank 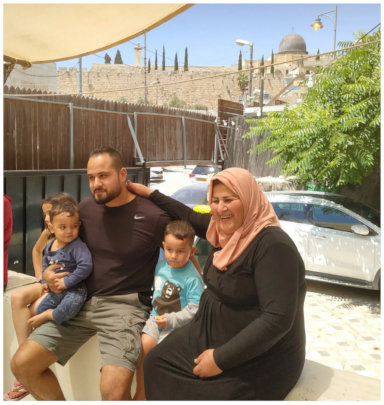 Amal Sumarin with her family

Sumarin Family Holds Onto Their Home for Now 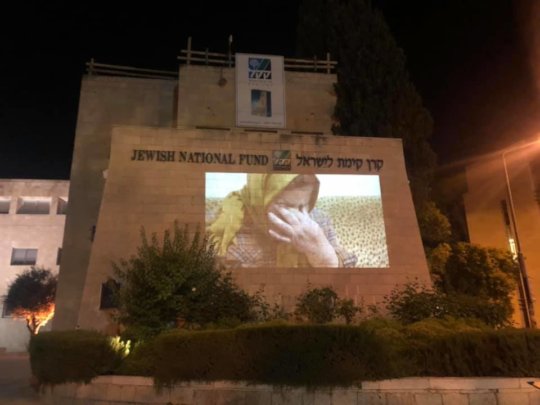 When we last updated you in August on the Sumarin family, we brough forth exciting news: the Supreme Court of Israel agreed to hear the Sumarin case come April 2021, rather than evicting them from their home on the 16th of August. Because this case has been going on for 30 years, the Supreme Court hearing is significant.

Thanks to the generosity of our donors, this fund made it possible for the family to petition the Supreme Court. We were able to reach our $40,000 goal to help the Sumarins pay for lawyer fees and possible fines. If Israel's Supreme Court rules against them, the family must pay $23,000 in fines per the lower court that ruled on technicalities in favor of the Jewish National Fund and $40,000 in eviction fees for forcible removal from their home. Should they win, this project will seed a legal aid fund for other cases, managed by Torat Tzedek, the Israeli human rights NGO run by Rabbi Arik Ascherman.

On a positive note, in response to the briefing teleconferences we held with 36 Congressional offices, Congresswoman Speier successfully lead 25 other Members of Congress in a letter to the Israeli Prime Minister. Thanks to those of you who sent letters to your Senators and Representatives about taking action on behalf of the Sumarin family.

Just as the Congresswoman was closing her letter, a BBC expose released news about a Russian oligarch's involvement with the Jewish National Fund (JNF) in the Sumarin eviction. A secret agreement between the Elad and the JNF was later revealed because of this expose- see the links below to learn more. When Secretary of State Pampeo last visited Israel, he visited a West Bank settlement. That morning, the Secretary ignored the allegations and visited the 'City of David', a tourist site constructed by Elad on the Sumarin family's land, immediately adjacent to the home we are all working to save.

We are drawing upon everything we learned in our advocacy for the Sumarin Family to begin to mobilize American constituents to prevent other evictions in Jerusalem by engaging their members of Congress. We hope to extend this fund in the future to help other Jerusalem families hold on to their homes. 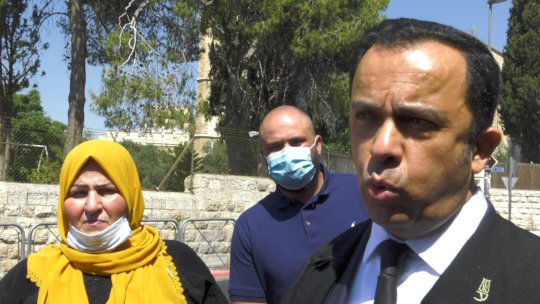 Amal Sumarin with her lawyer 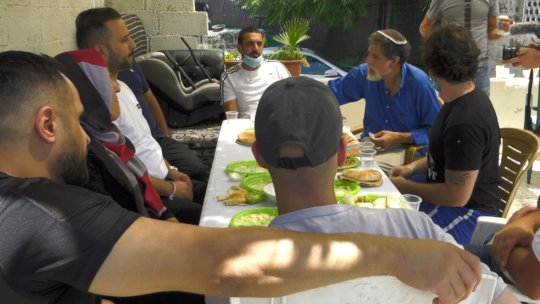 Strategy meeting at the Sumarin residence 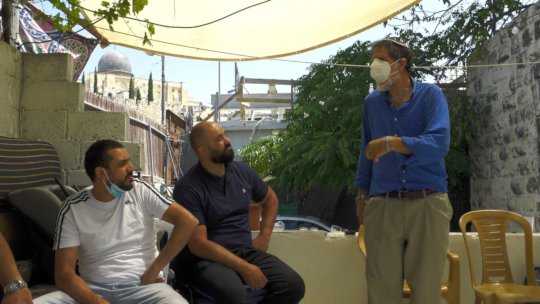 Sumarin house with al-Aqsa in the background 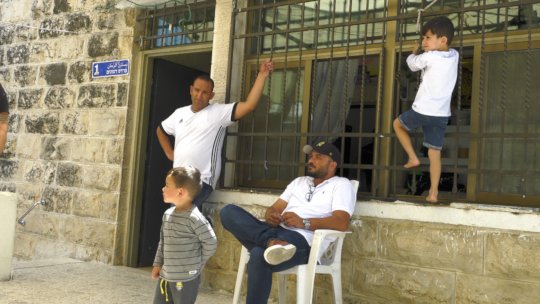 Sumarin family at their residence in Jerusalem

1 2 3 4 5 6 7 8 9 ... 28 ›
WARNING: Javascript is currently disabled or is not available in your browser. GlobalGiving makes extensive use of Javascript and will not function properly with Javascript disabled. Please enable Javascript and refresh this page.