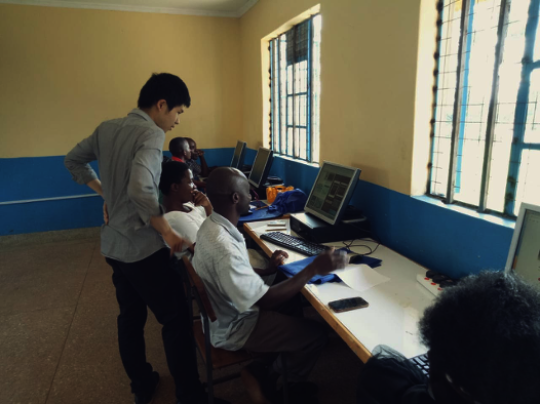 Thank you all very much for your kind donations, thanks to which we have now completed our ICT room at Simbi Secondary School.

We used the money from the GlobalGiving donations to first secure the room so that the technology would be safe inside. We were able to put up solar powered security lights to both protect the room and offset the electricity costs of the machines. We then purchased the computers and a router so the school can access the internet. Now the ICT room has 9 computers for the students to use, along with a TV and projector that the school already had. We also bought a whiteboard, something all of the teachers really wanted. We spent time downloading offline resources, such as offline Wikipedia, as well so that the students will be able to obtain information without the school having to pay for internet.

On the 30th August, with all the pieces in place, we organised an ICT training day for the teachers to show them how to incorporate the new resources in their lessons. The positive feedback was overwhelming. The headteacher even called this project a dream come true!

The Vihiga County governor was impressed by our work, and promised to donate 2 more computers to the school.

We are now planning to inaugurate the room amongst the students with a karaoke session.

We hope that the ICT room will allow the students to have a more enriched learning experience at school. The computer laboratory represents an opportunity to develop ICT skills and consequently have more post-secondary opportunities available to them. Thanks for your trust and support in contributing to the project. 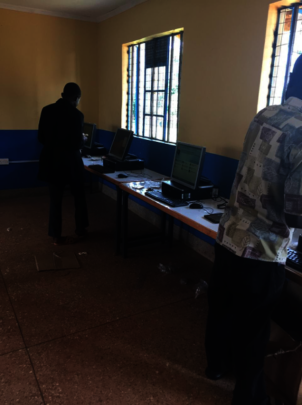 By The Team - St Philip's Matieko 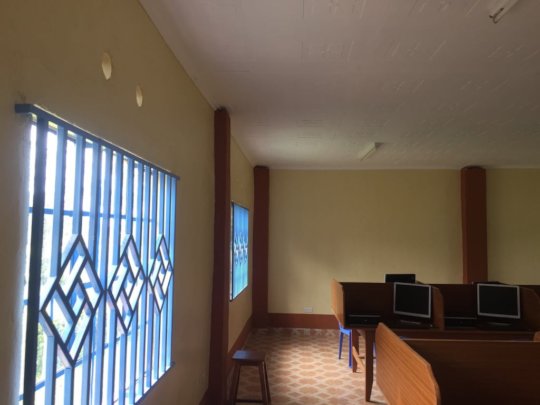 Over the summer 2019 we have formed a strong bond with both the community of St. Philip’s Matieko Mixed Secondary School, a relatively young institute in the rural community of Matieko, Kenya. The Head Teacher is very dedicated to this school and is seen as a third parent by lots of the pupils here. Being 2019 the first year of partnership between EPAfrica and the school, from the onset we were excited about the ample scope for investment. Given the government had previously provided 9 computers, with a further 11 promised, the building of a computer room appeared to be the most effective use of funds. However, we feared we would not have enough funds to completely renovate a fully functioning computer room. Thankfully, after our participation in GlobalGiving Bonus day matching campaign and your generosity, we were able to commit extra resources to this project. We are now very happy to be able to report back that it is very nearly at completion and looks stunning.

The room initially lacked the required wiring to be able to power the computers so the local electrician quickly installed plugs and lighting. Furthermore, it soon became clear that the presence of 20 computers would make the room a potential target for theft. This could seriously damage the sustainability and impact of the project. To tackle this, we employed the local welder, an alumni of the school, to produce metal bars and installed a security night light. Next came the ceiling, which was completed by a carpenter and previous parent at the school whose professionalism and work ethic has been a key highlight of the project. Several weeks later he also completed the construction of computer desks with partitions. It has also been great to contract local workmen, many of whom count children among the school’s alumni. Their workmanship has been very impressive and the project has also contributed to the local economy. Although aesthetics were never a priority for us, it was always the Head Teacher’s aim to have the smartest computer room in the local area. After the painting and installation of the perfectly sculpted furniture, the Head Teacher’s beam told us that we had created Matieko’s premier computer room.

As we did not have longstanding ties within the community, we have been reliant on local knowledge and advice in order to hire workmen. On the whole, this has been very positive as it has meant we have got the lowest prices and best quality and so ensured that our project money has gone as far as possible. However, in the case of tiling, the local workman had a great deal of teachers complaining that he had not adequately prepared the floor for the new tiles. The floor had originally been covered in a smooth red paint but in order for the tiles to grip, the teachers fretted, the existing surface must be smashed up. Although, the tiller was not happy with such widespread criticism of his work he agreed to further bash up the floor. This was finally completed after an alliance with the school’s cook saw us spend a productive afternoon smashing the floor all together. The tiles were then added and we could install the computers without fearing that dust will damage them.

At the time this report was written, we had only 10 days left in Kenya and had spent the final day, installing the computers and checking they are in working order. All that was needed was to install virus protection, educational applications and an offline version of Wikipedia. The computer room was going to be ready for the beginning of term and could be integrated into the school curriculum as soon as possible. We entrusted the room with a young and tech-savvy teacher who will ensure that it is well treated and has maximum educational use. In fact, the school has quite a number of young teachers who used computers during their time in high school and university. The Head Teacher as well is currently undertaking a Masters which involves modules on incorporating technology into teaching.  This school has been ready to provide a digital education for years but because of uncertain government funding has been unable to fulfil its potential. We are so glad that, due to your generosity, the school will be finally able to realise this and aid its students and the local community. Many neighbouring schools have had these facilities for years, so now students in St. Philip’s Matieko will be able to compete equally. As we were writing this report, the Head Teacher  showed the computer room to the local elders who appeared very pleased and curious. We hope that this room will be of use to their community and their children. 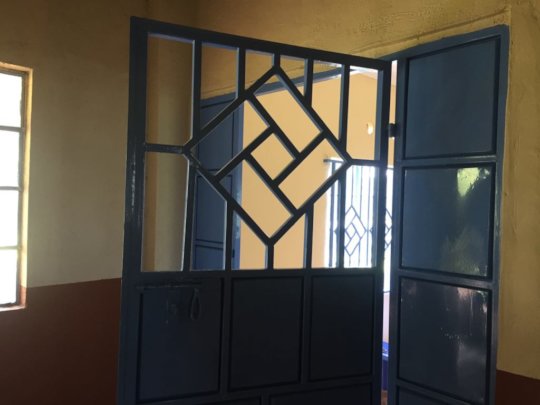 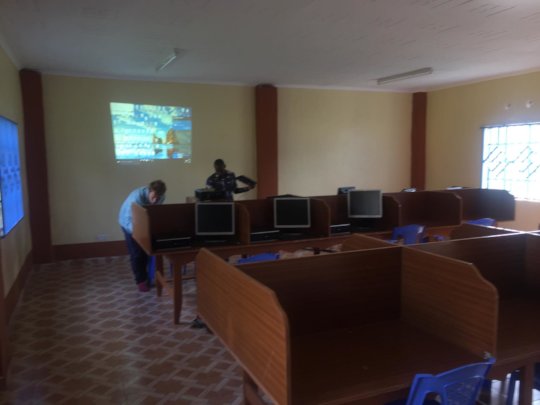 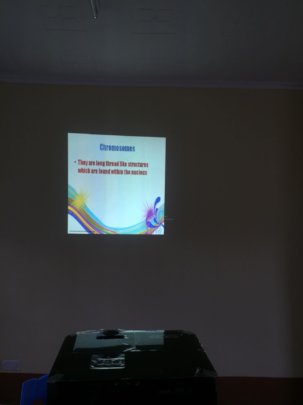 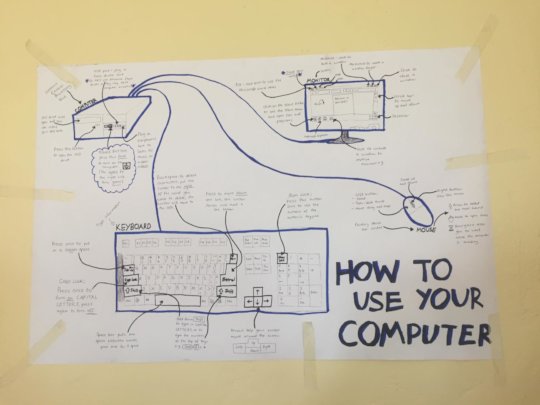 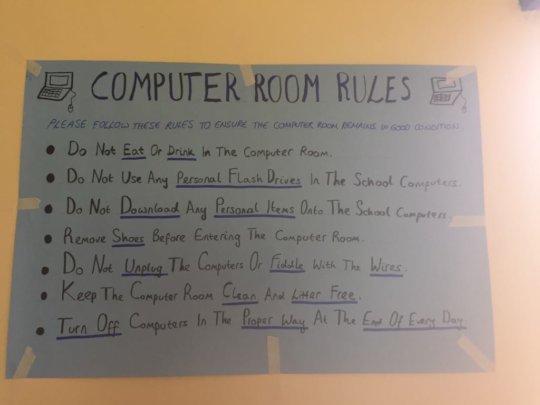 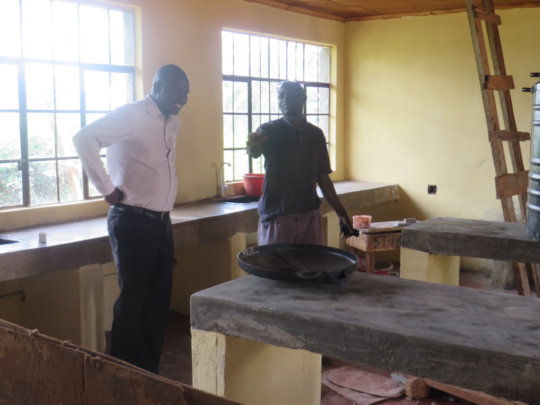 In summer 2019, we decided to raise some extra funds while in Kenya so we could focus our efforts on providing St Peter’s Keberesi with a first class laboratory. We received many generous donations from friends and family at home and abroad. This is a brief summary of how those funds have been spent and the impact we envision this new lab having on the pupils in this wonderful school.

When we arrived  at St Peter’s Keberesi, the school management showed us an empty room which they were hoping to turn into a lab. We were very lucky to be introduced to the school’s trusted engineer, Salbeen, who provided us with honest quotes, imaginative advice and an enthusiastic attitude. Our primary aims for the lab were to install permanent concrete benches, an appropriate number of stools and a fully functional water system. We were also able to lay down fresh concrete flooring and paint the walls. The lab now has professional form and function rivalling any in the county.

The impact of this modern laboratory will be positive and widespread. The new plumbing and benches will enable science practicals to take place much more frequently and be of a significantly higher quality. The students had previously been required to move benches and stools from other classrooms into the lab and use manually filled washing basins in order to conduct practicals. In the month we worked in school during term-time, before our improvements, only one practical took place, which was an internal exam.

Our hope is that the new facility will improve student wellbeing and academic performance, as well as making the school a better environment for learning in general. We expect that the professional environment, created through the painting, new stools and floor, will improve student engagement as science lessons will become more meaningful and enjoyable. The money raised in this campaign also enabled us to more than double the school’s rainwater harvesting capacity and install a modern filtration system, greatly alleviating the safe water shortages.

On behalf of EPAfrica, Project Workers Finlay, Thomas and Xinyu, along with Principal Albert, Engineer Salbeen, the staff and 600 students of St Peter’s Keberesi sincerely thank our generous donors who have made the project possible. 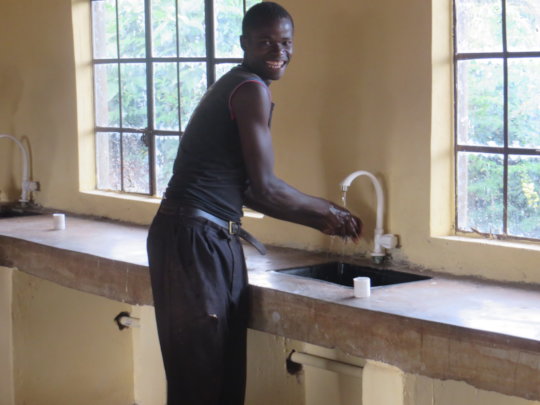 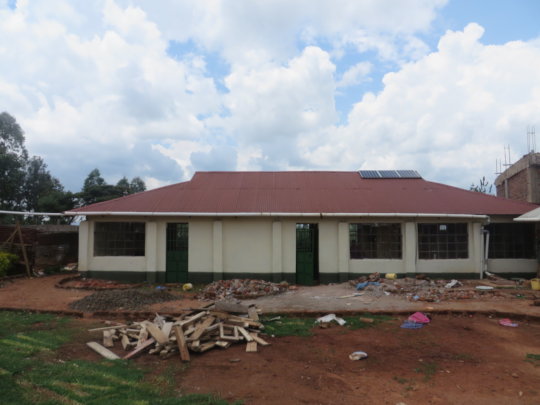 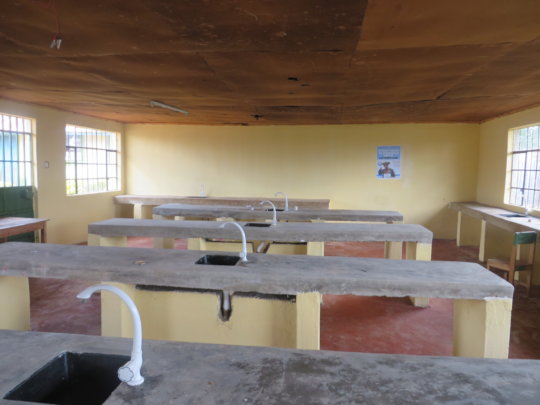 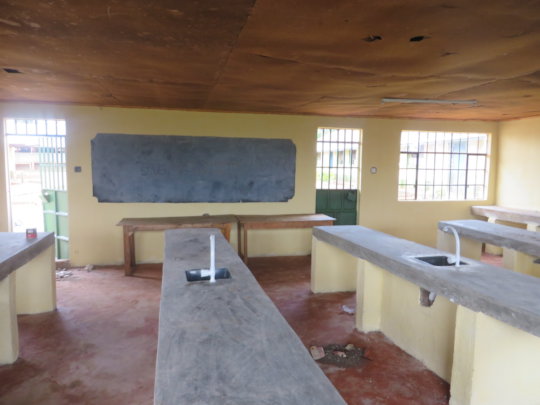 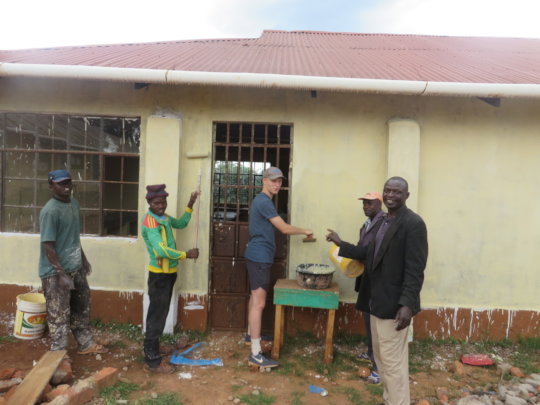