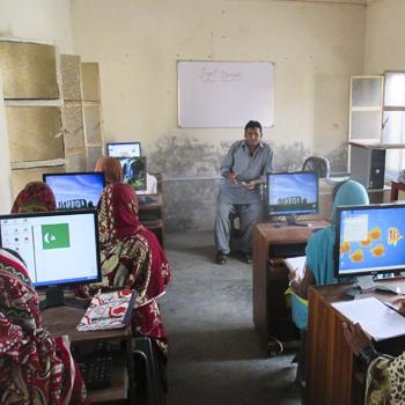 A new group has begun and students are taking the orientation about the computer technology. This group has great expectations to learn many things from the class. Former students are also involved in the community with the local teacher.

*Joshua completed his computer training course from our academy. Joshua was one of the best students in our academy. Not only was he studying about computer technology but was also very active in youth activities. After completing his computer course, he applied for a government job as a computer operator and he was selected for the job.

Joshua said, “I am really thankful for this computer academy that is helping us by providing the good knowledge of computer technology. Whatever I learn is very helpful to me.”

The new sewing group has started to learn their new sewing skills. They are also excited to be part of this training center and have a passion to learn a lot in the coming months.

*For purposes of safety and wellbeing, “Joshua” is a pseudonym for the individual being helped by this project. 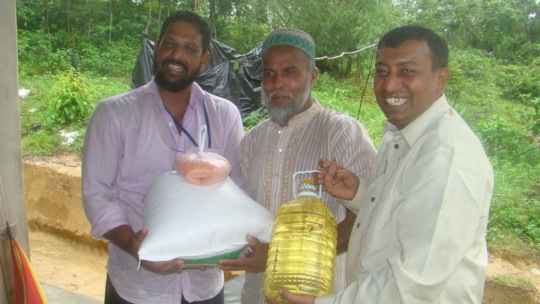 Our team was able to visit and provide a few basic needs to the refugees in Bangladesh.  Our ability to provide ongoing assistance is still being negotiated with local authorities.  We want to be certain we are aligning with their wishes and needs, as well as offering the food, shelter and more that is needed by the refugee families.

Rohingya refugee crisis is now about one year in the making, with an estimated 1.1M+ refugees in Bangladesh on the border.  Much funding from governments, NGO(s) and agencies has been allotted to this crisis, but still, there are so many needs. It looks increasingly permanent, with military and police presence increasing.

Our team on the ground is seeking optimal use of funds and analyzing how sustainability might be seen in the future.  Currently, this seems far off.  Relief teams are working to bring first, care to children - helping with education, health and counseling.  It may be years before real permanence can be found for these families - either back home, or other countries.

The local military is overseeing all relief efforts, working to bring organization to what can be a chaotic environment.  Through relationships, we hope to impact lives while seeking the best solutions.

More than three million Syrian refugees fled to Lebanon seeking shelter from the raging war in Syria. Due to the high number of refugees, neither the UN nor the numerous NGOs were able to meet the great need. The need is even greater when the families are made up of a husband, wife, and children numbering from six to ten. When they are made up of a husband and more than one wife, the number of children is usually from 11 to 22.

Recent statistics show that 781 babies were born last October, and more than 250,000 babies were born in Lebanon among the refugees throughout the year. Bear in mind that many children haven't been registered with the government and, thus, the real number is much higher. The UN declared that 85% of families live in unhealthy places, are malnourished, and have scarce food.

Many girls between the ages of 12 - 16 years are being married to men the age of their fathers. Due to the high number of child marriages, divorce rates have increased, and they often divorce after just one month of marriage.

Since Lebanon is a small country with four million people, and since the Syrian refugees are almost the same number, all the Lebanese villages and cities are affected by this phenomenon.  GHNI-Lebanon has a role in helping many people by enhancing education, improving health, providing clean water, and teaching them how to generate income.

*Farah's family has seven children. They benefited from several programs offered by GHNI. Her mother used to regularly attend our programs and the children used to attend classes. Consequently, they occasionally opened their tent for awareness lessons to be held.

Due to the hard-living conditions, the father did not have any choice but to make his daughter get married, like thousands of fathers, as a way of cutting down the burden.  Farah got married at the age of 14 years and was divorced just two years after. After she managed to reach Germany, the government offered her education since she was underage. Despite her divorce, Farah succeeded at school and received an honor award for the academic year from 2016 to 2017.

A few days ago, Farah was celebrated by all of her family. They were very grateful for all the years of investment GHNI has done in their lives.

*For the purpose of safety and wellbeing, “Farah” is a pseudonym for the individual being helped by this project.