Though the temperatures are beginning to drop in Ventimiglia, the Yalla Yalla web radio programming continues without delay or interruption. Now more than ever, the voices of the migrants need to be heard and their needs addressed. The team continues to conduct interviews with various migrants to understand their feelings about Europe, the reception system and the borders. Though they received negative news that they will not be able to set up a network in the Red Cross Camp because the Prefecture declined, the team will continue insisting that a network in the camp is necessary and urgent.

“People have to know why we are crossing the sea and how we are living now” said one of the Yalla Yalla beneficiaries, discussing the importance of communicating with families and friends back in their home country.

To make the content of the programming more engaging, the team plans to add in games during the broadcasts about Italy and the European Union. The games will allow the migrants to learn more about their basic rights and migration laws in the region in a more entertaining fashion.

The weather conditions in Ventimiglia have begun to worry the team as temperatures can reach freezing during the night and there are around 200 people that temporarily residing under the bridge. The team decided to carry out a survey among the migrants to get feedback on what else they need from the web radio service. The responses from the survey showed that all the migrants camped under the bridge know of the service; the access to internet and to music are the most appreciated services of the web radio; and that there is a need for more entertainment on the web radio to keep spirits up in these hard times. Despite external assumptions, the migrants made it clear in these surveys that what they want most right now is community and recreation.

“Radio- it’s a good way to talk and express ourselves!” 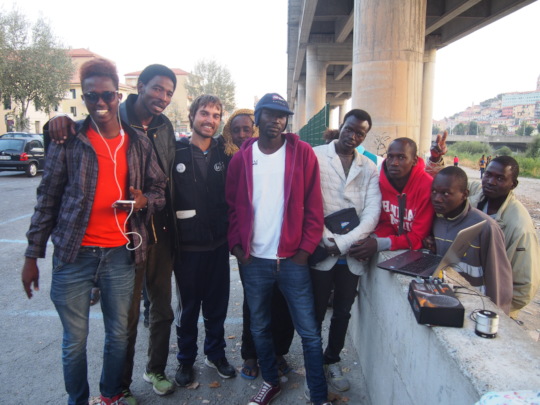 Though the team is preparing for winter and the coming weather complications, the broadcasts from under the Roya river bridge continue.

The project continues to provide free and stable internet connection, legal assistance and radio programs regularly to the 30+ continuous users that depend on it. The team has also been taking advantage of a space managed by volunteers called the “Euphemia” information point. WeWorld also ensures that the interviews with migrants continue. Beyond allowing the team to receive a true testimony of the migrants’ journeys, these interviews help them provide information to the migrants on the next steps for citizenship and asylum in Italy.

“I like the radio because I can get some information on applying for asylum and getting the documents,” one migrant told WeWorld.

Many have also been successfully using the application, mentioned in the last update, that allows them to listen to radio stations from around the world and find it easy and extremely helpful.

“Radio is a powerful tool to communicate but most importantly, to listen [to] the others” – Yalla Yalla listener 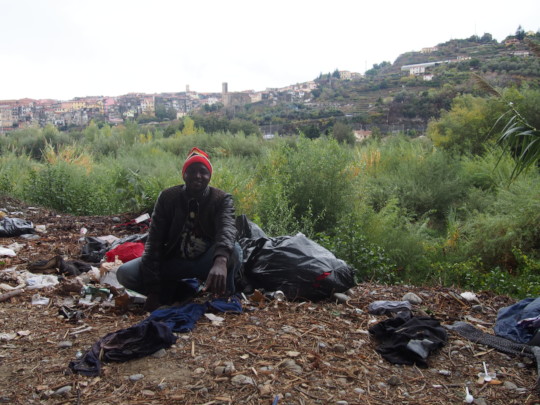 Creating space for unity and peace through web radio 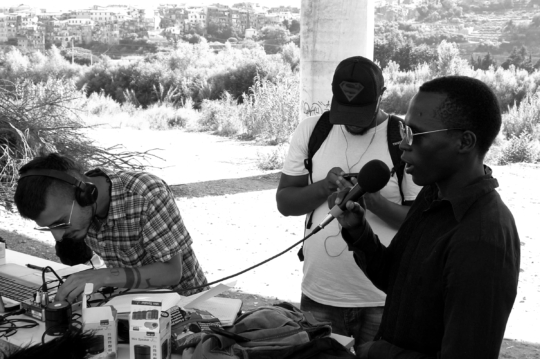 Now in our second month of work, the project has come to life!

After gathering all the materials needed for Wifi connection and radio, the team set up a fixed appointment with migrants at the informal camp under Ventigmiglia’s bridge where many have set up small tents, huts, and beds. Due to the precarious hygienic conditions, episodic violence and the lack of most basic services, those who live by this bridge, around 150-200 people, have many grievances and concerns that need to be voiced.

These daily meetings provide several people with Wifi, which is not even available at the Red Cross camp for the 300 people hosted there. The Info Legal point also does not provide this service, making WeWorld services necessary to complement other basic service provision in the area.

In addition to internet connection, the web radio project has also recorded loops in Arabic, English and French with basic information like where to find medical assistance, legal assistance or food distribution areas, which are streamed online and by the main bridge site. The team is also organizing to record legal information in several languages to add to these five radio broadcasts a week. As each broadcast brings people together, the work is very helpful for NGOs to find and help the most vulnerable cases and connect them with a WeWorld lawyer or a social worker.

“I don’t like journalist, people take photos. But you. You, I like. I like the radio and I feel good to make the interview. With you it’s ok,” one of the migrants stated to WeWorld.

The daily presence of the web radio staff has allowed the team to overcome the original mistrust of the migrants and has served as a way to directly hear their stories. To counteract misleading media discourse, the team tries to emphasize the human side of these migration stories. In the interviews, migrants usually talk about the desert and the hard journey done in groups of 40-60 people where the greatest danger is the lack of water as well as the danger that lies in Libya, referred to as “an extremely dangerous place where people’s lives are worth nothing and you can die at any time for the most trivial reasons.” Given these traumatic experiences, the web radio also tried to play local and migrant musicians to provide a moment of tranquility and entertainment amongst the stressful and harsh environment.

“The music unites people and is international,” said Aly, a Sudanese web radio user, while a group of Sudanese people intoned together a song of Mahmoud Abdel Aziz.

During this period, the team discovered an application that enables people to listen to web radios around the world, which seems very popular among the migrants. It includes radio stations from African countries as well (among them Sudan, Mali, and Chad) so migrants can even receive news about their country of origin which would otherwise be difficult to access.

‹ 1 ... 6 7 8 9 10 11 12 13 ... 27 ›
WARNING: Javascript is currently disabled or is not available in your browser. GlobalGiving makes extensive use of Javascript and will not function properly with Javascript disabled. Please enable Javascript and refresh this page.