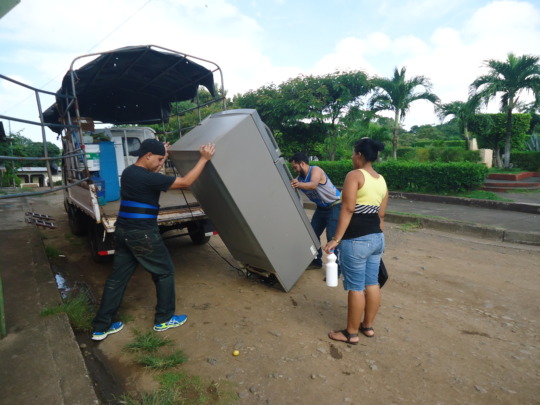 In august 2016 we started with our community home. Loyda, Daniel and Jonthan are living with us and the house we rented had place for six beds, so with me and Mayela, there was one bed left.

But last month I wrote about Jose who came to live with us. So the beds were all filled. And still we will give a home to 1 or 2 persons more... So, we decided to look for another house. And a few weeks ago we moved to a new house! Here a short report how the moving-house-day was:

It’s 8:30 a.m. The moving van has arrived. The young men whom we had asked to help us are also in good time. But the carpenter in charge of removing the big cupboards in the bedrooms is late.

Today is the day we will finally move to our new home. In the week leading up to today we have already moved some items using a vehicle belonging to a friend as our new landlady had kindly allowed us to store our belongings in one room in the new house.

There are no removal companies in Juigalpa, so it is up to us to organize everyone ourselves: finding cardboard boxes (not for sale here!), a van, a person who can drive a van, as well as people who can help us lift and lug our belongings. Everything is done with ‘human power’ without the help of machines that can lift heavy items ( e.g. a washing machine, refrigerator or oven) onto the van.

Also David is in good time. He will collect Daniel, Loyda and Jonathan for the day and together with our staff Carmen and Heydis take them to a small farm to spend a quiet day in nature. They are familiar with the place as they have been there before which increases the level of enjoyment for them. At the end of the afternoon they will be collected from the farm and taken to their new home.

Generally speaking people here do not have a lot of experience in moving house. My survey among our Ruach staff shows that on average people have moved 2 to 3 times. The ideal here is to own your own house, no matter how small and deficient, which encourages people to stay put where they are. Fortunately I’m quite an expert mover. My last move was from Leiden in the Netherlands to Juigalpa nearly two years ago when I had to totally clear out our house of many years. In comparison this move within Juigalpa over a short distance is ‘a piece of cake’.

It was inspiring to see Enyin, Alvaro, Carlos and David at work. They worked hard and were creative in finding solutions. For example, when the carpenter did not manage to move the cupboards from the second floor and was about to cut the cupboards into two pieces, they came to me indignantly and told me this was not necessary and that one of them had a friend who would be well able to do the job by simply dismantling the cupboard.

And so it happened! As the picture shows, in the new house the cupboards were assembled again on the top floor which required some inventiveness. But they got it done!

All is well that ends well

We got delayed by the problem of the cupboards, but by 5 pm everything was moved and most items had found a place in the new home. Of course we had planned beforehand what had to be put where and who would be sleeping where etc. Fortunately nobody had difficulty sleeping in a different environment for the first night!

Daniel and Loyda show little emotion how they experience the move. Jonathan is more expressive as he misses something from the old house and has his tense moments. We are alert to this and try to help him get used to the new circumstances.

The cupboards were assembled the next day. And of course we have been busy ever since putting the dots on the “i’s”, and we’re pleased with the result. We feel at home in our new house!

new member in our comunity home 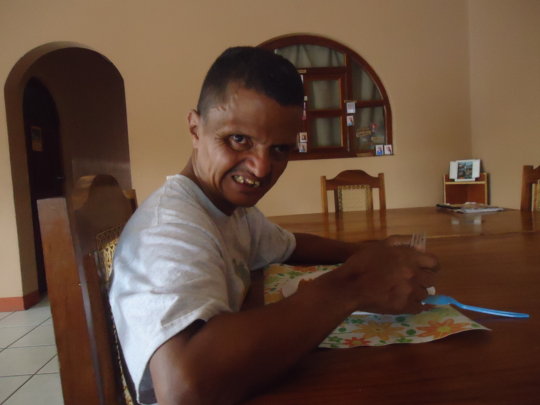 Since one month Jose is our new family member! I will share how he came to our home and how is our proces to help him and us to feel us familiar to each other.  It all starts about three months ago.

There are visitors at the door: Alfredo, a young man of just over 30 and his uncle Jose, in his early forties. Today is the third time that our future new housemate Jose visits us to get used to his new living environment.

It will also give us time to gradually get to know Jose. After a somewhat tedious period during which Jose’s family did not keep to the agreed arrangements regarding the customising visits, Jose’s visits are now more regular. The visits become longer and without accompaniment as time goes on.

Alfredo
Alfredo knows Jose very well. Alfredo used to live for many years with his grandmother, Jose’s mother, after Alfredo’s own mother and his sister left him behind about 30 years ago to illegally move to the USA in search of a better life and a higher income to support the family in Nicaragua. This often happens in Nicaragua, and as a teenager Alfredo himself also made the illegal move to the USA with his sister and aunt with the ‘help’ of people smugglers. This took them bags of money and his sister and aunt were nearly raped, but finally Alfredo was reunited again with his mother. Alfredo never got a residence permit and years later he was caught by the USA authorities and sent back to Nicaragua. That was some years ago and Alfredo now earns his living as a hawker selling his ware on the streets.

Many Nicaraguans have one or more members of their family living in the USA, Costa Rica or Spain. Many cross the border illegally and try to eventually obtain legal status. This is a very uncertain existence. But nonetheless, a big part of Nicaragua’s income consists of remittances sent by Nicaraguans living abroad to their families back home.

Jose
Up to five years ago Jose had a good life. He lived with his mother who looked after him well. Among his brothers and sisters three left for the US and only one brother, a lawyer, stayed in Juigalpa. Jose attended the special needs school in Juigalpa for some years. He excelled in running and won several medals!
But everything changed when his mother died. He took up residence with his brother who had his own family by then. The care for him was such that Jose spent more and more time out of doors on the streets. There were nights that he couldn’t sleep at home and had to resort to sleeping outside. His sisters in the US sent money for him and tried to ensure that Jose would be better looked after, but to no avail. Jose became a well-known personality on the streets of Juigalpa. People offered him alcohol, taught him how to smoke or otherwise abused him. Nobody protected him from this abuse, partly because there were no alternatives.

But now there is an alternative. And that is why Jose, popularly better known as Chepito, will become our 4th residence after we move house later this month. His sisters are over the moon, but his brother less so, which is the reason why it took the sisters a lot of effort to persuade their brother to agree to the move which as a result got seriously delayed.

But where there is a will there is a way. And Chepito’s vists to our Ruach home made it clear that he is keen to join us. And we think that we can offer him enough of what he needs and that he fits in well with the needs of Daniel, Loyda and Jonathan. Therefore, meet Chepito in the picture!

So in fact this is an announcement of our extending family! The process did not go as planned and we are behind schedule, but this sort of processes cannot be forced. And in the end it is miraculous how the right people come our way. It remains a matter of living life in wonder and with grace! 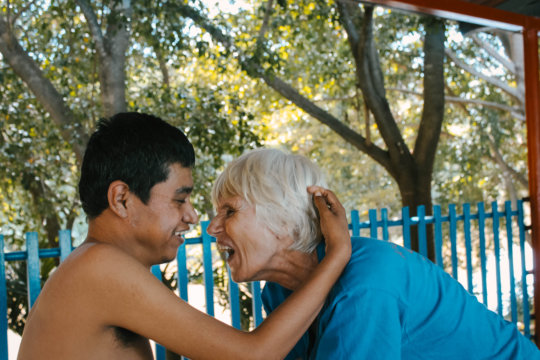 First and foremost, our organization wants to give a huge thank you to everyone who has supported us since the start of the Ruach Foundation.  Without your support, we would not be where we are today! Thank you for choosing to believe in our cause and in helping us to improve the rights of adults with intellectual disabilities, here in the beautiful country of Nicaragua.

Within the past year, our foundation has grown to work with three different adults within our care home and up to 13 various individuals in our activity center.  Each are uniquely different in their own special way which means their rate of growth are each substantially different.  However, we wanted to share with you the progress of one individual that our foundation has worked with over the course of a few months.

Our foundation wants you to meet Daniel!

Before coming to the Ruach Foundation, Daniel lived in unfavorable conditions.  His living environment was not ideal where he was malnourished, infected with parasites, was not properly toilet-trained, and had little to no social interaction.  In fact, Daniel had such poor communication skills that he was not even able to speak or make a single sound.

Fortunately, our foundation has worked with Daniel to provide for him the attention and care that he needs.   This includes working on his eating habits, use of the bathroom, and improving his social interactions with others.

Daniel has started to speak or make sounds within the last few weeks!

We hope that we can continue to work with Daniel to improve his overall well-being! We look forward to sharing more of Daniel’s progress with all of our supporters.

If you are interested in hearing the stories of others in our care and activity center, please follow us on Facebook.  Click the link to learn more about how our foundation makes a difference in Nicaragua. 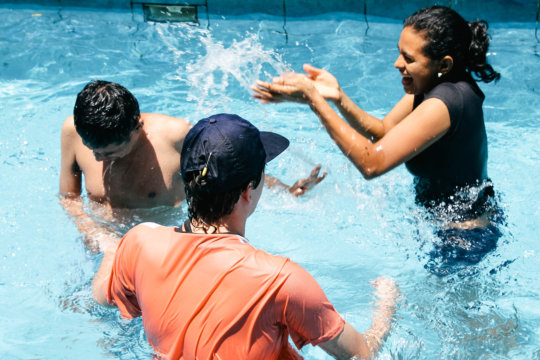