Why do we need to save giant trees ? 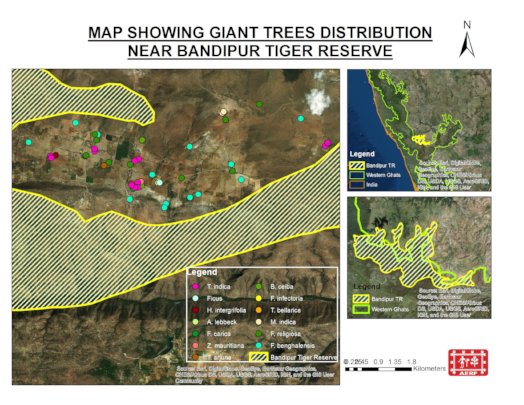 This is the question we expect and are prepared to face from different audiences whether they are funding agencies , academics or general public.

The idea of planting saplings have caught up world wide as an important measure to combat climat change, conserve soil moisture and arrest soil run off etc. But these steps will hardly make us understand how diverse tropical forests come into being. In other words, with all our efforts and will we might not be able to create a forest that comes even slightly close to a tropical forest. For that to happen, we need to understand the role large or giant tropical trees play in regeneration of many plants and shrubs.This in turn leads to creation of diverse tropical forest ecosystem- a natural wonder!

AERF field team did a researchin the last quarter on diversity of undergrowth of a few giant trees which are now marked for conservation in the Ratnagiri district during the monsoon season. The findings of this very short study are astonishing. A single large tree of Terminalia bellirica or Ficus religiosa supports regeneration of minimum 25 different plant species under its canopy. Out of which about 50% of the saplings have been germinated from droppings of birds. In addition, number of saplings of these trees themselves can range between anywhere from 150 to 500. The giant trees in this sense are a small sanctuary of plants and reflection of what kind of trees can be seen in the surrounding forest. We are learning more about these giants and totally convinced now that by saving one giant trees ,we are supporting existence of small diverse plant and animal kingdom. The research also highlighted one important fact that most of these giant trees have survived due to their cultural significance! Thus conservation of culture and tradition will play a big role in conservation of biodiversity in this region.

In addition to this study, field team of our partner organization, Junglescape, extended the work of giant tree survey in buffer zone of Bandipur Tiger reserve in the souther western ghats and mapped total 58 giant trees. About 60% of the total 58 trees are of genus Ficus. The genus Ficus is worshipped by local communities across India and fruits of these trees are critical source of food for all the birds. One more reason for tieing cultural conservation with biodiversity conservation.

We will continue to provide important insights into the wonderful world of giant trees and how they form an important network of stepping stones in the increasing fragmented and human modified forest landscapes of the Western Ghats.

Thanks for your attention and we sincerely hope that you will continue to support this unique conservation story. 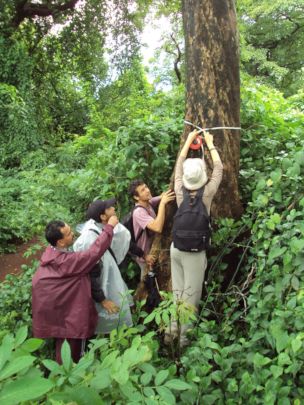 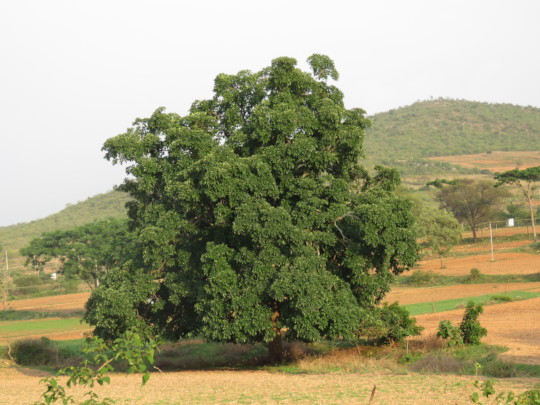 We are excited to share the news about our partnership with JungleScapes- a non-profit working on ecological restoration in the Bandipur Tiger Reserve and surrounding region in southern Western Ghats.

Through this partnership , we are especially focusing on scaling up the campaign of saving giant trees in the southern Western Ghats. In the last quarter, AERF team visited the partner organization to understand their work and discuss opportunities to expand the Giant tree campaign. We are of the opinion that partnerships with like minded organizations will play key role in mainstreaming the cause of saving large trees in the Western Ghats. Moreover, considering the sheer expanse of the Western Ghats mountain range, it is imperative to collaborate with other organizations and individuals for spreading the work of conservation.

During the visit, AERF and JungleScape team identified some 10 large trees in Lokere reserve forest area. The trees have been marked with GPS and survey on social importance of these trees has begun.

We are sharing pictures of giant trees in Bandipur region and map of these trees. From the map, it will become very clear why we need to push hard for saving the large trees in otherwise ecologically degraded and heavily modified forest landscapes of the Western Ghats.

We are very happy that JungleScapes is keen and committed to saving Giant trees in the southern Western Ghats.

All this would have been impossible without your continued interest and support to this initiative. 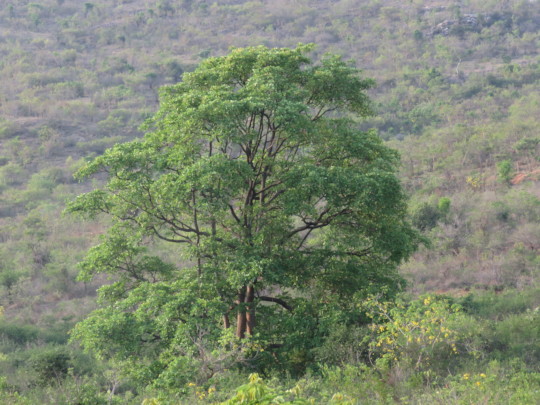 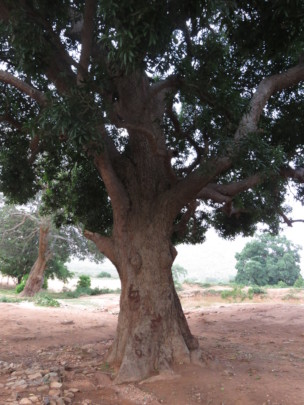 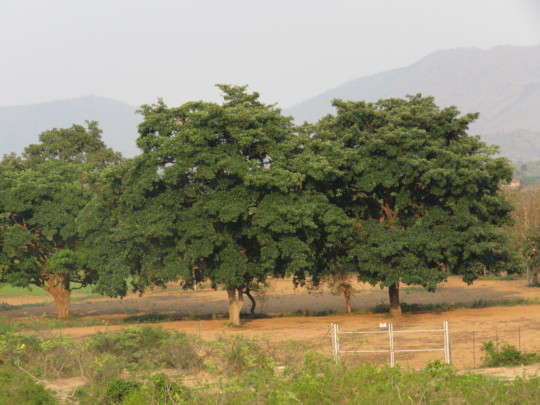 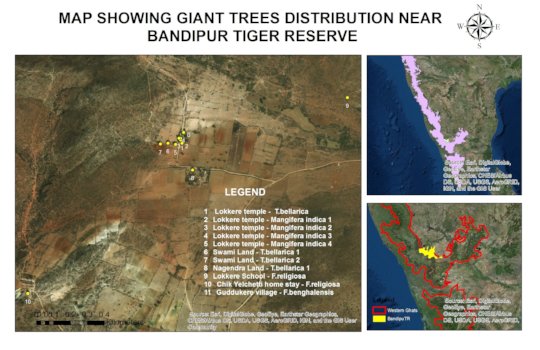 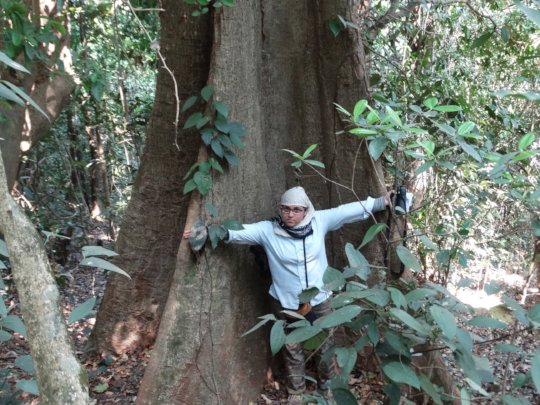 While we mapped many giant trees to understand biodiversity associated with them , reasons behind their current conservation status and threats posed to their survival in the quarter gone by. what has struck us the most is the interdependence between a giant tree and big frugivorous birds such as hornbills.

The botanical name of this giant tree is Antiaris toxicaria that we came across during our survey in village Devole ghera Prachitgad in Sangameshwar block of Ratnagiri district. Antiaris toxicaria is large tree sparsly distributed in the Western Ghats biodiversity hotspot. This tree has also been recorded in African countries such as Uganda and in South East Asia.

It is believed that leaves, bark and seeds of this tree are toxic so much so that people sleeping under the tree had experienced congestion in their chest. Similarly, some tribes used paste of leaves for hunting birds in South east Asia. Recent discoveries in medicine have provided evidence for the use of its seeds for treatment of diabetes.

As regards the ecology of this tree, it is an emergent tree that means it competes for light and reaches the canopy very fast in a forest and can grow upto 50 meters. Thus it provides the necessary landing space for big birds and also allow lot of shade loving plants to grow under the canopy. In other words, this tree creates an ecosystem around itself once it reaches its optimal growth stage. The less known and very important part of the story is dependence of this tree on frugivorus birds chiefly Hornbills for its survival. We have documented that fruits of this tree are savoured by all the four species of Hornbills found in the Western Ghats- Indian gray hornbill, Malabar pied hornbill, Malabar grey hornbill and Great hornbill.

We were quite fortunate to photo document all the four hornbills on this particular tree during the fruiting season this year. These birds consume the flesh of the fruits and disperse the seeds as wide as possible depending on the home range in the surrounding landscape. We have noted the saplings of this tree under the nesting site of Great hornbill at one of the locations about 15 Kms from the tree. That establishes this beautiful relationship and mutually supportive co-existence of both the species.

What is little bit surprising is that there is no mention of this tree as an important source of food for hornbills in scientific literature for India. This once again underlines the importance of on the ground conservation work for saving the giant trees in this case in filling this critical knowledge gap.

We are now in process of rewarding the community members for conserving this magnificient giant tree.

We believe that you will enjoy reading this story and also the photos taken of the tree and the charismatic birds attached to this report.

We would like to thank you all once again for your continued interest in and support to the giant trees conservation campaign. 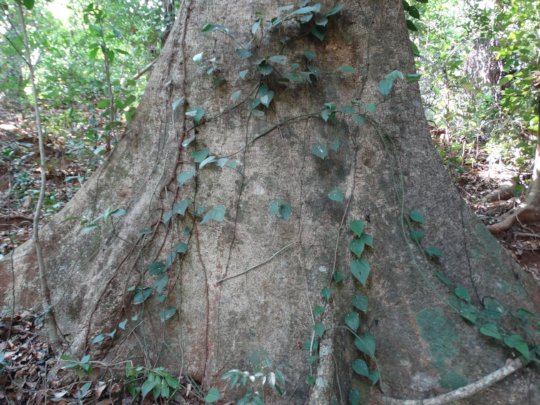 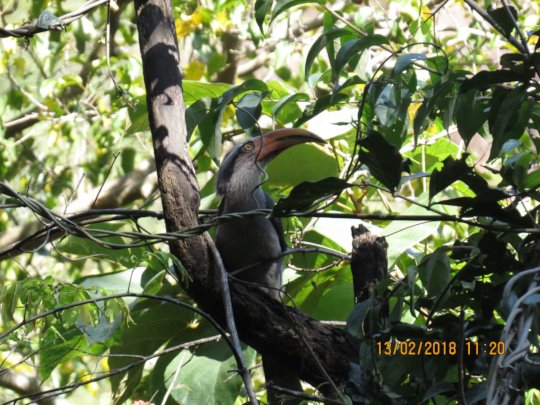 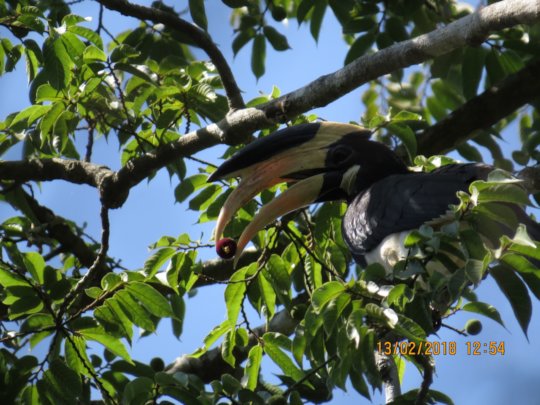 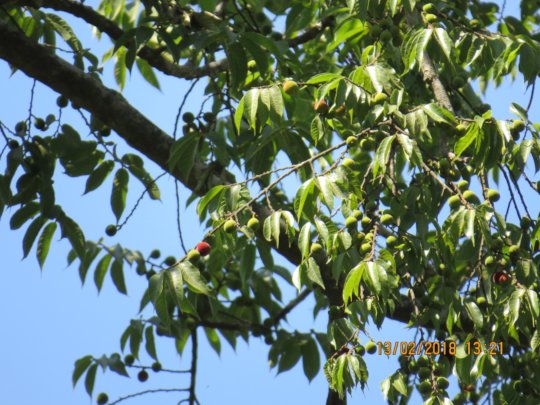 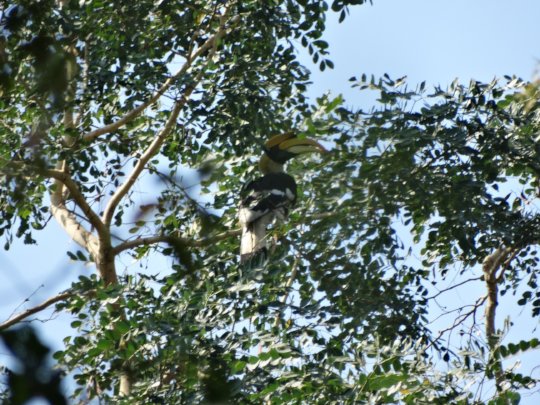 Great hornbill-dispersal agent03
‹ 1 2 3 4 5 6 7 8 9 ›
WARNING: Javascript is currently disabled or is not available in your browser. GlobalGiving makes extensive use of Javascript and will not function properly with Javascript disabled. Please enable Javascript and refresh this page.