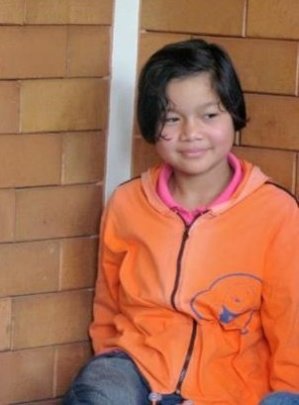 From being “afraid to cross the busy streets” – according to her friends – to charting a path for herself in tourism, New has had quite a journey since she joined the Warm Heart family 11 years ago, in 2009.

New was born in a remote village – inaccessible during the summer rainy season – to two subsistence farmers. Her parents had no education themselves but wanted their two daughters to have every opportunity possible; they wanted them to get an education and find careers outside the village.

With no school within the village, New, when old enough, started studying in a one-room schoolhouse 30 minutes away. The teacher, teaching in his/her native Karen dialect, did the best they could but the children fell behind. And, the only hope they had for an effective education was to learn Thai and attend the primary school in the valley.

For her betterment, her parents agreed to let her come live at Warm Heart and New started school in the valley. Her parents also asked a relative in the village to come as a house mother for her and two other village children, to make sure they were all well cared for. Over a decade later, there are 40 children who call Warm Heart their home and the house mother is still here ensuring that it remains one.

When New finished high school in Phrao, she had majored in languages – English and French and a bit of Chinese. Having been very shy and lacking in confidence her entire life, New was still unsure of the path she wanted to chart for herself – however, she was learning towards becoming a tour guide.

Then tragedy struck and her father died after a short illness, thus leaving her mother to tend the crops and care for their farm animals alone. Torn and conflicted, New turned to her Warm Heart family to guide her. Warm Heart came together with key village members and found a way for New to continue on to further her education. A cousin of hers decided that his wife and child could come live and work at the Children’s Home while he went to assist New’s mother.

New then applied to the state university in Chiang Mai, was accepted, and went on to major in languages and tourism.

As much as she had always been a leader of the younger ones at Warm Heart, she had not been out on her own ever before. At first, the city of Chiang Mai terrified her. But getting out into the world was the challenge she needed to find her confidence and chart a path for herself.

She built a network of friends who helped her get a range of part-time positions in local restaurants and hotels – and realized that what she deeply wanted was to be a tour guide.

Then she faced another trial. Scheduled to graduate in June 2020, New was set to start an internship at a large hotel, when COVID-19 struck. Hotels started closing and her internship and job prospects started fading. She found a few days of work as a tour guide intern before that closed as well. Luckily, she had the credits she needed to graduate, but the future looked uncertain.

So, she decided to come back home. She came back to Warm Heart and has been helping us translate content from Thai to English for our volunteers and supporters around the world. She is also teaching English to the Children’s Home students and spending time with the elderly and disabled in our community.

She just received word from a hostel in the city that she can start as soon as they have some guests, but till she starts her next adventure we could not be happier to have her back home. 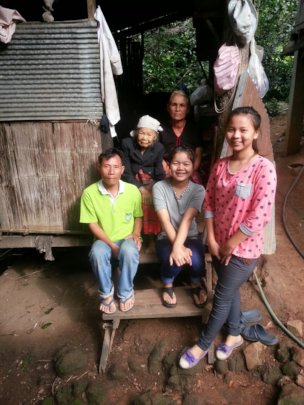 New with her father, younger sister, and granny 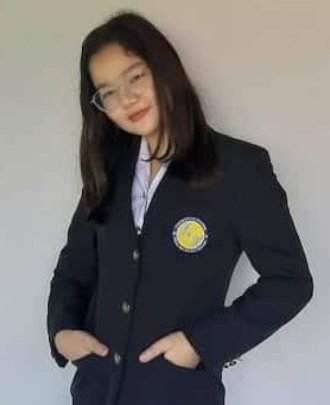 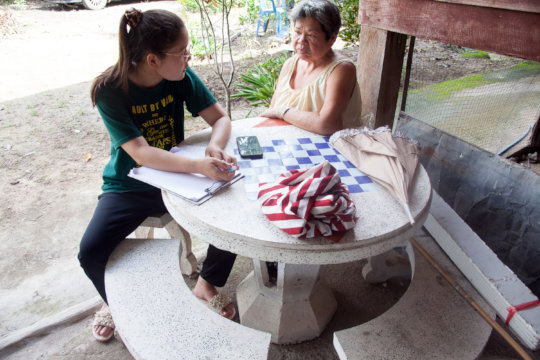 New visits with the mother of disabled neighbor
Aug 27, 2020 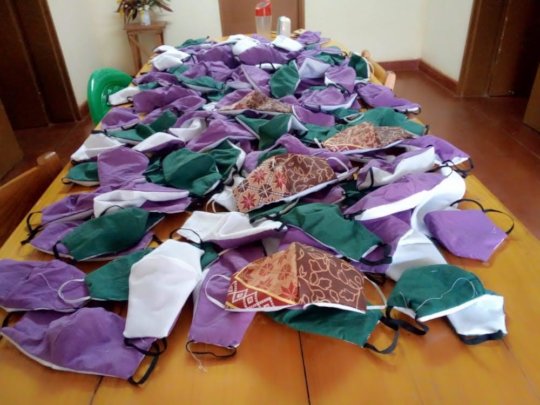 Thanks to your prompt and generous response, the sisters have distributed 1000 masks for virus protection and the funds are about to arrive for the chicken incubator. The funds have come in over the course of three months and went directly to the sisters of Holy Family Carmel monastery to make masks.

In May, we were able to fund one sewing machine and had the good luck of the vendor giving us two for the price of one machine when he heard the cause. The sisters have made over 1000 masks, including 300 for the local hospital with the balance for nearby residents and participants of biochar training sessions.

The majority of the funds were received this week and we sent off the funds for the incubator. The balance has been spent on supplies for the masks and distributed at our biochar training sessions that we were allowed to hold, implementing COVID precautions such as masks, hand washing stations, and social distance. The eggs from the healthy chickens being fed with biochar in their feed will no longer need to be carried to a friend’s incubator and the local children will get nutritional meals.

These are gifts that keep on giving.  Thank you for your investment in this great project - we have protected many lives with the masks, and the incubator will help increase food supply for the many children in the surrounding villages. 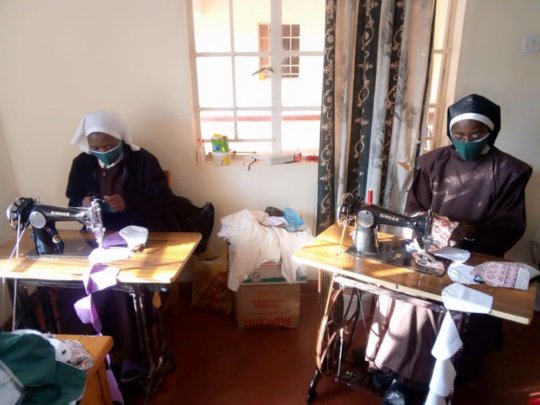 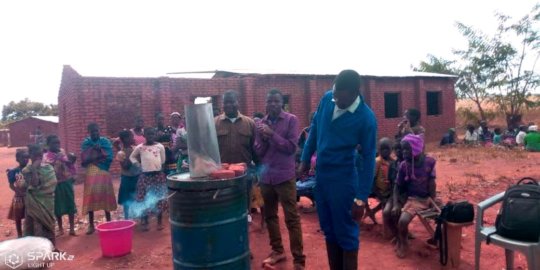 The virus stopped the biochar training in Malawi and Kenya, but the villages have been asking to restart. Sister Miriam Paulette applied for and won a small grant to train in 20 villages, but the grant funds have been stalled with the US government shutdowns. Your gifts provided the means to buy corn cobs from struggling farmers until they can learn to make biochar and re-start village training on June 13.

Our team leader was joined by trainers from local organizations at the June 13 event: “Today we had Biochar Training in Dowa district. The training was graced by both men and women, Boys and Girls. In total, we had 56 men and women… We had a number of challenging questions from the participants, but  [local leaders] showed a professional understanding on the subject matter, Moving forward, I hope will discuss ideas, the sustainability of the Biochar as the group was keen to know a lot about Biochar and stay in touch with Warm Heart Malawi.”

The sisters at the Holy Carmel Family Monastery have been sewing face masks for the hospital and the local community.  They asked for additional sewing machines and we raised the money for one more.  When Sister Paulette and the Prioress went to purchase the sewing machine, the shop keeper sold them two for the price of one, since it was such a good cause.

We are also helping raise funds for an egg incubator. The monastery chickens are so healthy now from the added biochar in their feed.  The new chicks will go to feeding the children in the community. We have almost reached our goal, we need another $200 to be able to help buy the incubator.

The young man in the photo collecting corn cobs and corn stalk for biochar is called Steven and Sister Miriam Paulette considers him a son of the monastery …" one is of the poor boys that she was trying to feed when she first reached out to Warm Heart some years back….He was stranded and could not go to school due to school fees but later on, he found another way and he is now in college doing plumbing. He is [back at the monastery] because of lockdown so he is the one who is helping to carry corncobs. He is not part of the working staff and can render his services freely without inconveniencing the community. [We, the sisters,] give him little money as a gift for the job he's doing but also to support him as a poor boy who depends totally on the sisters' help."

Your investment in these farmers and our team leaders is spreading the means to improved livelihoods, one village at a time.

Thank you for your enduring support! 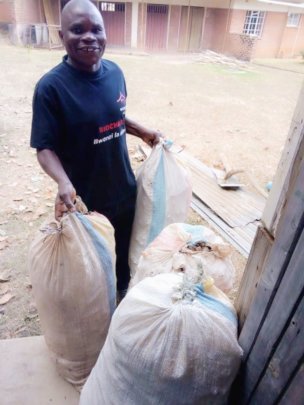 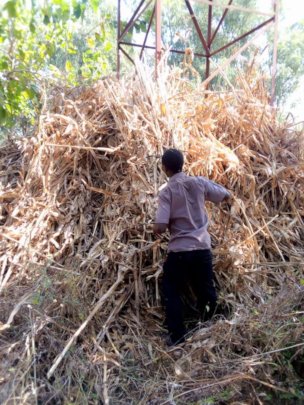 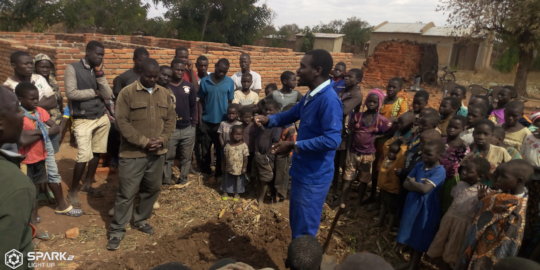 Dowa village training of Trench method
‹ 1 2 3 4 5 6 7 8 9 ... 11 ›
WARNING: Javascript is currently disabled or is not available in your browser. GlobalGiving makes extensive use of Javascript and will not function properly with Javascript disabled. Please enable Javascript and refresh this page.