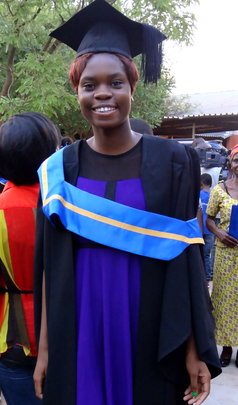 Zambia's 2014 school year concluded in December.  At that time, Margaret graduated from secondary school having taken the GCE exams in November 2014. We are thrilled to report that Margaret did an exceptional job as she was at the top of her class having the highest results at Chalo Trust.   As an outstanding student, she has been appointed the KF Intern to work at the KF office - where she is doing an incredible job.
We asked Margaret to write an article about her journey through KF.  Having started in Grade 8 at Chalo Trust, she has had an incredible experience achieving her secondary education with the help of KF.  Currently she is taking Russian language classes in preparation for applying for Russian scholarships to study medicine.
Read about Margaret's KF journey.  Also, here are recent photos from graduation and Margaret receiving her exam scores. 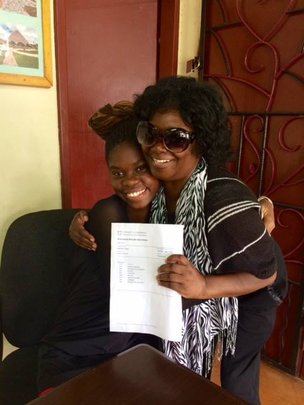 The second academic term has concluded in Zambia and we are excited to share the achievements and activities of our Kucetekela Foundation scholars and program.

As you know, KF currently supports 32 students at two secondary schools in Lusaka as well as 26 outstanding alumni who are working and studying across the globe. Our current students have maintained the high standard set by the KF scholars who preceded them and continue to inspire all of us. Here are a few of the highlights from Term 2:

• Two KF scholars attended the inaugural Yale Young African Scholars Program in August at the University of Ghana in Accra. From more than 1200 applicants, two KF scholars were offered places in this program organized and run by Yale University students and faculty members. The program is a week-long high intensity program to teach secondary students from Africa about global issues and strategize about innovative solutions. It was an honor to have KF students involved and they had an outstanding experience!

• Organized by KF alumni, we hosted our first official KF reunion event in August in Lusaka. Many of our alumni attended, all our current students were also there as well as several volunteers and local supporters of our program. This is certain to be an annual event!

• In July, KF welcomed our new Princeton-in-Africa Fellow – Olivia Thompson. This is the sixth year that KF has partnered with Princeton-in-Africa. Olivia is a 2014 graduate of University of Michigan with a degree from the Ford School of Public Policy. She plans to focus her fellowship at KF on expanding the academic tutoring systems for KF scholars as well as strengthening the gap year programs for KF alumni as they transition to tertiary education and formal employment.

• The KF students are high achieving outside the classroom as well. In Term 2, there was a major theatrical production of Oliver Twist at Pestalozzi Education Centre and seven KF students earned parts including several main roles. All students had a wonderful experience and did outstanding jobs!

• A team of volunteers and supporters undertook our third annual Bike for KF in New York City in September. This event has become an important fundraiser for KF and this year we had 16 riders participate and raised more than $25,000! The KF students made a video to motivate and thank the riders and we encourage you to watch:
https://www.youtube.com/watch?v=C3n5fDzGojE&feature=youtu.be

Here is a letter from Margaret thanking her supporters.

We hope that you all are well!  We are writing to share some exciting updates from Lusaka and invite you to an upcoming KF event.
Attached is the latest KF Newsletter - now fully written and produced by our students in Lusaka!  Our students have written many stories about their first school term of 2014.  We hope that the stories give you a glimpse into the experiences enjoyed by our scholars as well as many of their accomplishments.  Be sure to check out Margeret's article about  Cross Country.  For even more stories and information about our wonderful students, please be sure to check out their blog:  www.kfstudentstories.blogspot.com
We also want to advertise the 3rd Annual Bike for KF event in New York City!  This year, Bike for KF will be held on Saturday, September 20th.  This event is a beautiful, non-competitive bike ride that starts in New York, goes over the George Washington Bridge into northern New Jersey and then back into NYC.  Riders can choose to ride either 30km or 60km, and everyone riding is raising money for KF.  It has been an incredibly fun event the last two years and we are back for more this year.  Our goal this year is $30,000 so we need YOUR help!  Please email Oliver (oliver_barry@kucetekelafoundation.org,) if you are interested in joining the Bike for KF team!  If you can’t ride this year, we hope you will consider supporting one of our riders.
As always, thank you very much for all your support and interest in our students and program.  If ever you have questions or want more information, please send us an email.
Attachments:
‹ 1 ... 6 7 8 9 10 11 12 13 ... 16 ›
WARNING: Javascript is currently disabled or is not available in your browser. GlobalGiving makes extensive use of Javascript and will not function properly with Javascript disabled. Please enable Javascript and refresh this page.