The reconstruction after the earthquakes continues

By Cooperacion Comunitaria - Responsible of communication 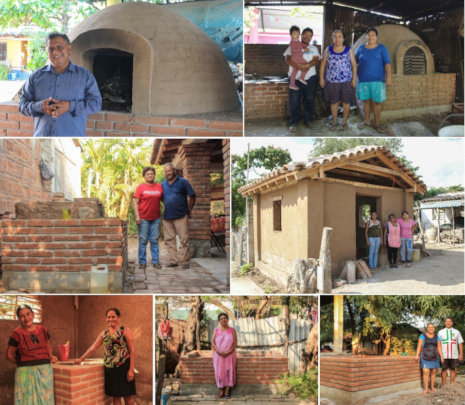 After more than year since the Comprehensive and Social Reconstruction of Habitat project started in the Isthmus of Tehuantepec, Oaxaca, it has been consolidating thanks to the participation of the communities; to the generous contribution of foundations and people who responded to the emergency caused by the earthquakes in 2017; and to the decisive work of Cooperación Comunitaria’s technical and social team in the field.

In the community of Cazadero Abajo, in Niltepec, the fourth school-kitchen took place, and it adds up to the ones done in Ixtepec, Xadani and San Francisco del Mar. The purpose of this process is to share with the participants the kitchen model proposed by Cooperación Comunitaria, so they get to know the constructive system of bajareque cerén, as well as its different phases.

As part of this formative process, the families collaborated in the construction of another women’s kitchen through activities of mutual support, known as tequios, from the foundations to the walls filled up with mud. During these, we also developed a workshop to sensitize about local materials and foster a reflection about the importance of taking care and defending the territory. Afterwards, the participants evaluated the school-kitchen by expressing their opinions and doubts about the final result to get involved in the design of their kitchens, that will be built subsequently.

In Santa María Xadani, in the other hand, six comixcal bases were built in only four days, due to the enthusiastic participation of the families. In this community another workshop to sensitize about local materials was given, during which the participants demonstrated their awareness about the need to recover and preserve the constructive knowledge of the region.

In addition to that, on February 1st we started to study the constructive traditions in the community of San Mateo del Mar, where we are proposing to build several kitchens, along with the group Colectivo Monopaküi.

Last February 11 of 2019, Cooperación Comunitaria formally presented to the inhabitants from 17 of 41 houses that have been concluded, in a ceremony with the presence of some foundations’ representatives who have supported the project, such as United Way - Mexico, Fomento Social Banamex and Fundación Sertull.

In the last three months, there were workshops of reduction and management of risks to reflect about the unmeasurable exploitation of the environment as one of the causes of the impacts that natural events have on the populations and, based on that, to develop concrete actions to take care of the common goods.

Finally, during this trimester a wooden structure was placed to build the roof of the Center of Arts and Crafts (CAC) in Ixtepec, where masons and laborers are recovering the constructive technique with “mud” and bajareque cerén, that it is applied to the construction of kitchens.

In the same way, we implemented some workshops about traditional roofing with wooden poles, beams and roof tiles, as well as traditional brick flooring, as part of the comprehensive focus from which the work of Cooperación Comunitaria is developed, that considers training activities for the construction workers.

Even with all of these advances, the support is still necessary to continue with the reconstruction process, because there is still many people without homes and with their economic activities restrained due to the damages in their productive infrastructure. 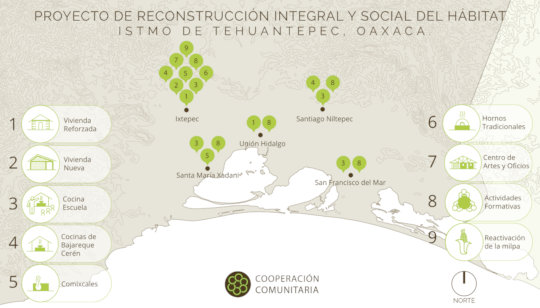 Currently, we work in 5 communities 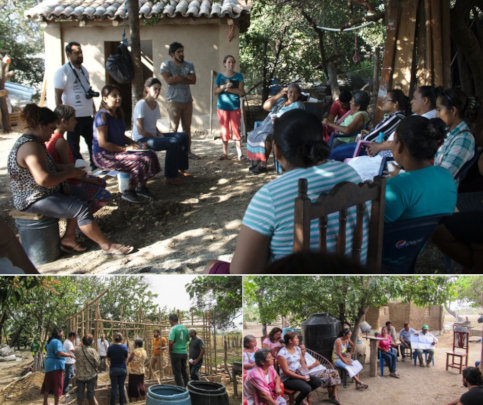 School-kitchen to learn thru mutual support 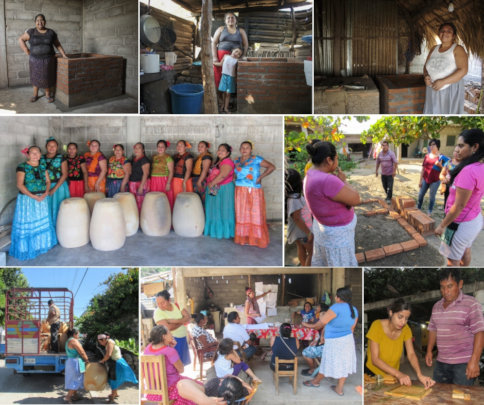 6 comixcal built in 4 days due to participation 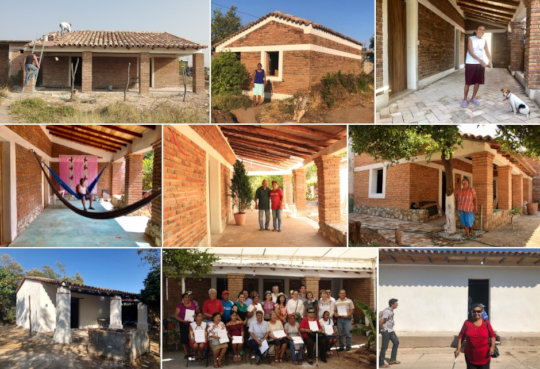 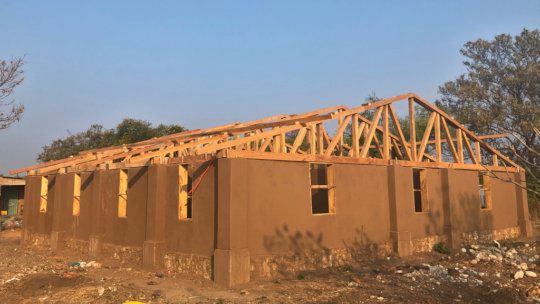 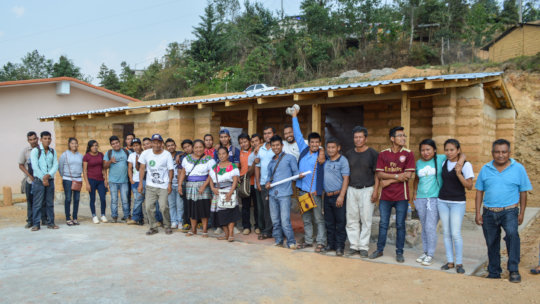 As part of the third phase of the Comprehensive Reconstruction of Habitat Project in communities of the Montaña region of Guerrero, affected by hurricanes Ingrid and Manuel in 2013, the construction of the second Indigenous Education Center in the community of Ojo de Agua restarted after it was suspended due to the raining temporary. The first one was built in La Ciénega in May.

The support of the people of the community, in collaboration with the field team and with the community promoter Grabiel Cantú, has been decisive to continue with the different processes. It is foreseen that these will show substantial advances through December.

In addition, a piece of land was designated for the construction of the Sustainable Classroom with reinforced adobe at the Intercultural University of Guerrero State based on the connection established since 2017; and Cooperación Comunitaria agreed to develop four practical workshops each month from January thru June 2019, during the constructive process.

The classroom itself will serve to strengthen the recovery of traditional knowledge among the young people in the region. There, the implementation of theoretical and practical workshops will continue, whose purpose is to diminish vulnerability through the analysis of territorial risk and through the construction of different ecotechnies —such as dry toilets and firewood saving stoves—, as well as the models of reinforced housing against the impact of the earthquakes in their home communities, located in different municipalities of the region.

Also, as part of the collaboration with the University, a recording studio in their building was set to our disposal, which can be used to continue the production of radio capsules that can make people aware of themes related to social production of habitat. Those could be disseminated in community media and commercial media, as well as in the digital platforms of Cooperación Comunitaria AC.

Besides, next December 4 we will participate in the activities of the University’s Week of Involvement, to which we were invited to talk about how we first connected with the institution and about the collaborative work from then until now.

Currently, a series of interviews have been carried out with people who live in houses built with traditional adobe, with the reinforced system proposed by Cooperación Comunitaria and with industrial materials to compare and develop an analysis based on multiple indicators of habitability defined throughout the project in the different communities we worked at.

During the previous two stages of the project, we developed diagnoses in response to the emergency post-disaster, and recovery of traditional knowledge to develop a proposal of reinforced adobe housing against the strong earthquakes and winds in the region, adapted to the local weather and culture, in some communities of the municipality of Malinaltepec. 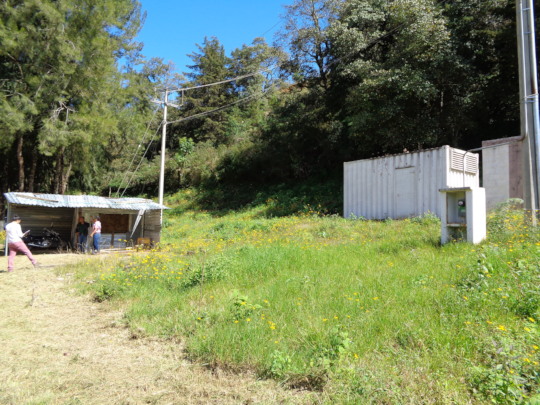 Land for construction of Sustainable Classroom 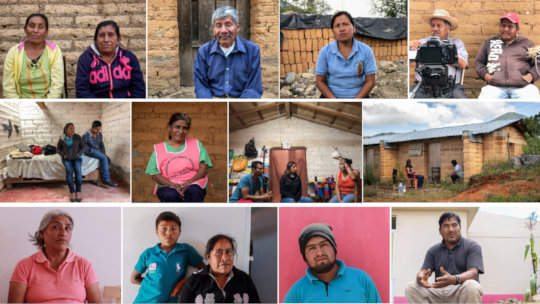 Advances of reconstruction a year after earthquake

Comprehensive and Social Reconstruction of Habitat

Last September marked one year after the earthquakes that severely affected the Isthmus of Tehuantepec region, in Oaxaca state, Mexico, where we developed the Comprehensive and Social Reconstruction of Habitat project, that has consisted in the recovery of constructive traditions, adequate to the environment and local culture; as well as in the use of local materials and adapted technology that enables safe systems, which resist the strong winds and earthquakes in the region.

During the last trimester of the year (September-November) several commemorative, reflective and training activities have taken place with the purpose of placing the inhabitants as key players for decision-making and taking action in the reconstruction’ process. Also, we sought to foster the recognition of the different processes that compose the whole project by the participants of each one of them; and to exchange their experiences and learning during this last year.

Throughout the project, we have built three school-kitchens where the constructive process serves as practical workshops to learn the reinforcements of bajareque, a traditional constructive system of the region, that adapt to each locality to resist the strong earthquakes and winds in the area.

The first one was built with the Ikoot community of San Francisco del Mar in December of 2017; and two others with the Binnizá communities of Ixtepec and Xadani, this last one was built along with the Centro Operacional de Vivienda (Copevi).

Besides, the last three months two more kitchens were concluded in Ixtepec —three in total— while six other are still in process. All of these have been built with the system of bajareque cerén, based on the traditional bajareque, but instead of placing tree trunks, the branches of trees are woven into columns for each corner. This contributes to diminish the severe deforestation that we have identified in the region.

Also, between September and November, thirteen traditional bread ovens have been finished and six more are in different phases of the construction process.

On the other hand, since last trimester we started the planning and design process of 22 kitchens of bajareque cerén in Niltepec along with Fundación Origen; and the reconstruction of seven bases of comixcal ovens in Santa María Xadani, in coordination with the civil association LUUM, with totopera women (who produce a regional kind of tortilla toast) that work with those organizations to improve the production, distribution and sale of their products.

This part of the project also includes 40 kitchens in San Mateo del Mar, where we reunited with the local Reconstruction Commitee to continue relations and pending commitments since September and October of 2017.

In the case of the housing reconstruction, 18 have been inhabited again by the families who lived there before the earthquakes damaged the structures. Meanwhile, the construction process of 17 new houses continues, as well as 44 reinforcements against the strong earthquakes and winds in the region. To this process, ten houses have been added, which include two of them that will be rebuilt with the system of traditional bajareque, with materials that were recovered from collapsed housing, such as trunks and roof tiles.

In the Center of Arts and Crafts the phase of walls flattening has ended, and it is currently in the roofing process. The construction of this Center has enabled the training of the builders in the technique of bajareque cerén, so now they are also tasked to build the kitchens.

As a transversal axis of the whole reconstruction process, tequios and workshops have taken place, based on their traditional ways of collective work and mutual support; as well as a part of the collaborative methodology proposed by Cooperación Comunitaria AC that engages the community with the constructive work. This fosters the assimilation of the proposal and the people's active participation during the construction of all structures. This allows them to know about the proposal of reconstruction with reinforcements and its appropriation.

Finally, during September and October we developed an environmental diagnosis related to the productivity of traditional ovens and a series of workshops about territorial risks' management and analysis; raising awareness about the use of local materials; and the right to adequate housing as a constitutional law and a human right. 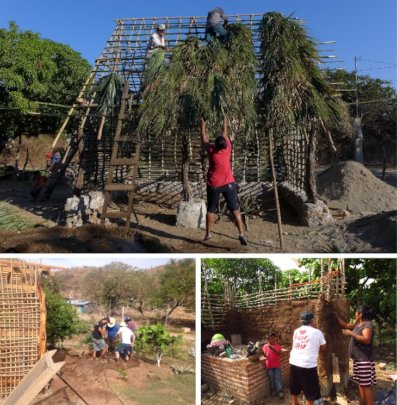 School-kitchens' construction serves as a workshop

School-kitchens' construction serves as a workshop 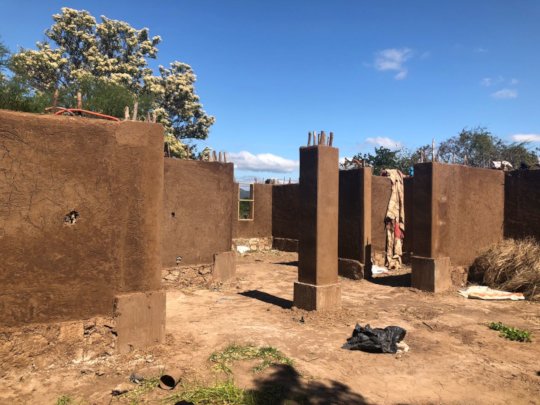 Walls finished in Center of Arts and Crafts 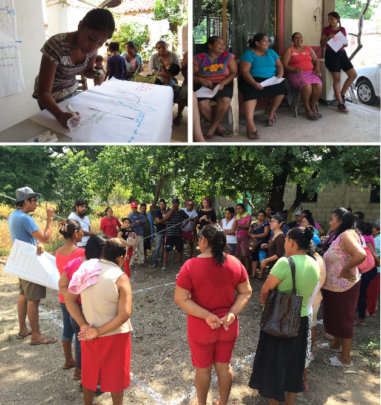 Workshops during the reconstruction process
‹ 1 2 3 4 5 6 7 8 ›
WARNING: Javascript is currently disabled or is not available in your browser. GlobalGiving makes extensive use of Javascript and will not function properly with Javascript disabled. Please enable Javascript and refresh this page.