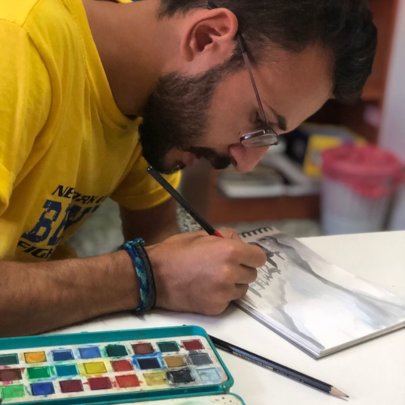 Talented Basel, who put on an exhibition in NY

We’ve come a long way since opening the HUB in December 2016. The diversity and the number of both classes and activities we offer have increased substantially, as has the number of active participants. Currently, the HUB maintains a tight schedule of European language classes, IT and coding classes, soccer, basketball, Yoga, swimming, hiking, beach cleaning, exclusive women–only courses, and creative workshops such as film, music, percussion, sewing and pottery etc.

The HUB is an essential component of the well-being of the residents on the island. It equips them with an education and intellectual tools that are useful for future employment opportunities as well as cultural integration.  Everyone at the HUB abides by a strict Code of Conduct and is treated with unbiased respect and consideration.

Some facts and numbers for this reporting period: The HUB has now registered more than 1255 students from the refugee community. It has a substantial turnover of more than 200 students a week, credited to the hard work and dedication of both volunteers and residents. Our volunteers have thus far completed over 9900 drives or 30,000 kilometres to transport our students from camp to the HUB and back, facilitating this success.

Our teachers and volunteers have taught over 700 English classes. Fifty of our advanced English students have been enabled by the HUB to take the ESB exams, which have had a 98% success rate, often with distinction. This language certification can be beneficial to residents applying for jobs or wishing to continue their studies in Greece and abroad and can set them apart from other applicants. Twelve of our students were awarded scholarships at the American College of Athens (although not all could go due to asylum restrictions), and five students completed a specialised training program on Cultural Mediation and Interpretation.

Some of our creative students have had significant successes themselves. Some of our Echo HUB Film class productions are screened by Solar Cinema. If you want to see more, visit the HUB Collective project on our website: http://www.echo100plus.com/en/projects/project-11

The artwork of a very talented resident was featured in an exhibit in New York. The HUB guitar and percussion classes have put on a concert at the HUB, and one at the local theater, which attracted volunteers, residents and Greek locals and was an opportunity to bring the community on the island together. Finally, the HUB produced “ZINE” http://echo100plus.com/en/magazine, an art and literature magazine featuring the work of the residents.

Separate from education and activities, the HUB frequently supports the camp residents with clothing and hygiene distributions, often catering to the needs of more than 800 residents. More than 5860 articles of clothing, as well as over 4000 detergents, soaps, shampoos and dental care items, have been handed out to residents by our volunteers. These distributions are a massive and complicated logistical effort involving the handling of inventory and ensuring a respectful and dignified exchange. Simultaneously, distributions are both physically and mentally intense and demanding for our volunteers to complete.

Due to the success of the HUB, we have been granted permission by the Camp authorities to include minors (both accompanied and unaccompanied) in many of our courses. This is a step in the right direction, as it allows these young adults to spend some meaningful time outside of the camp, and has further expanded the impact of the HUB on the community.

A special thank you goes to Aegean Solidarity Network for sponsoring all hygiene items for distribution!

A huge thank you to all ECHO volunteers – without You, the HUB would not be staffed!

And finally, thank you to all donors - past, present and future - for believing in our mission and for being the financial backbone of the HUB!

With gratitude, the ECHO100PLUS Team 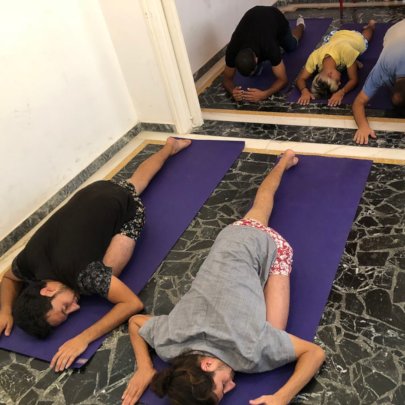 Yoga at the HUB 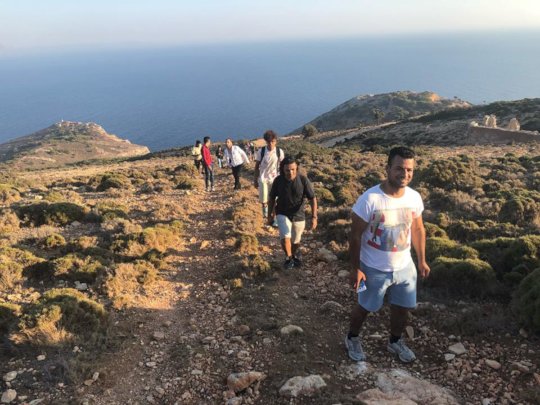 A Sunday hike with residents and volunteers 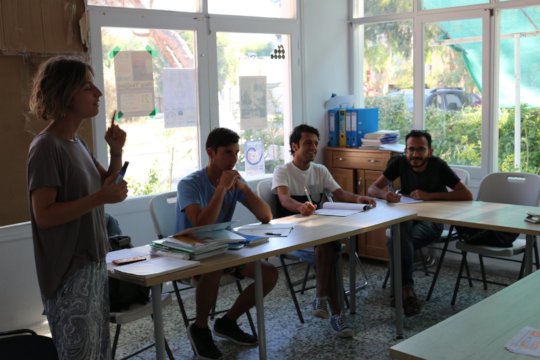 Our English teacher Maria with students 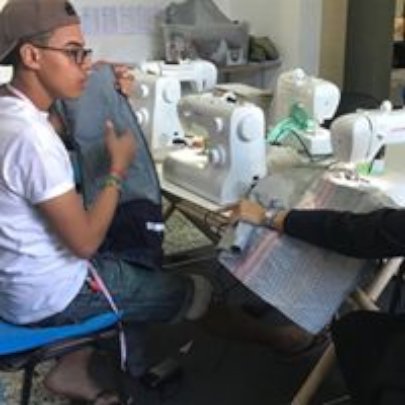 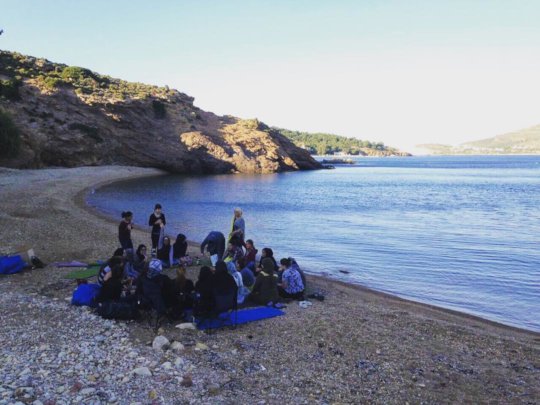 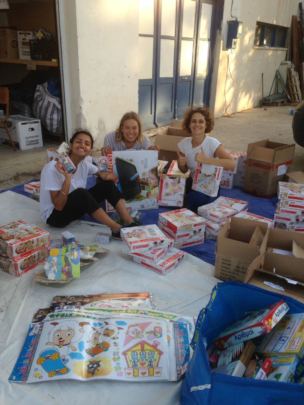 ECHO100PLUS’s success is contingent on our volunteers. They are responsible for the daily completion of activities and are instrumental in making the Hub run smoothly. As Echo100Plus is a non-profit, we need donations to support our volunteers’ hard work and dedication. We provide free housing (or heavily subsidized) and assist with travel expenses for those who need it through the generous donations we receive. Our policy is that money is not a barrier for those committed to helping. Since Echo’s refugee aid projects start in the summer of 2015, we have had the pleasure of working with over 600 volunteers from the most far-reaching corners of the world. In 2018 alone, 50 volunteers have so far been a part of the ECHO team at our ECHO-HUB on Leros. As a result, our volunteers have a major thing in common - a shared humanitarian responsibility and compassion with refugees that are in desperate need of help and kindness. Our volunteers learn invaluable skills such as teamwork, hands-on problem-solving, and experience an exposure to a variety of different cultures and realities. Several of our volunteers have embarked on a career in the humanitarian sector after their experience with Echo, which we are very proud to claim some credit for. Our volunteers are responsible for day-to-day tasks such as resident transportation (to and from the camp to our day centre - the ECHO-HUB), inventory organization and distribution of our clothes storage, teaching classes in various languages, running recreational activities, operations and scheduling, local environmental maintenance and overwhelmingly providing a compassionate, friendly, and respectful environment that is crucial to the well-being of the camp’s residents and ongoing integration process. Our volunteers are truly the backbone of Echo’s operations, and without them, we could not do the work we do. Therefore, we would like to thank all of our current and future donors for providing us with the financial means to sustain our volunteer program.

“The people gathered for no other reason but for humanity and kindness. The people are not famous in the media perhaps because they are not rich in the sight of media, but of course, they are rich because of possession of hearts full of priceless feelings that will never be bought by money...They helped us to continue being hopeful that we can restore and restart our lives in a new world. They illustrated that borders and limitations cannot stop love...You left Leros but not our hearts...” 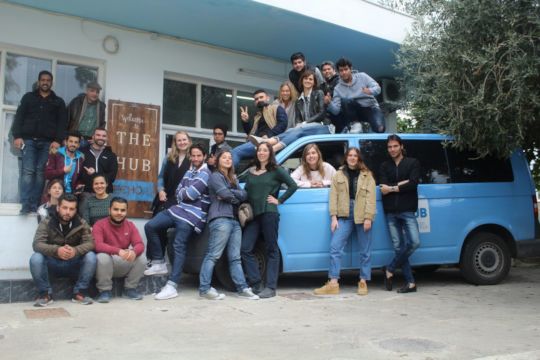 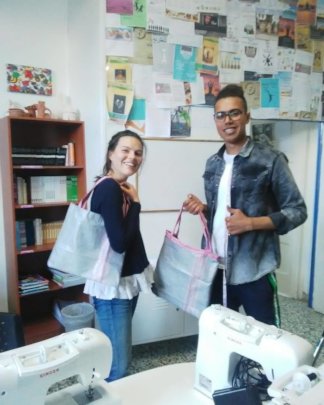 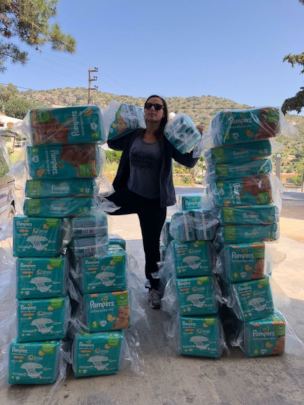 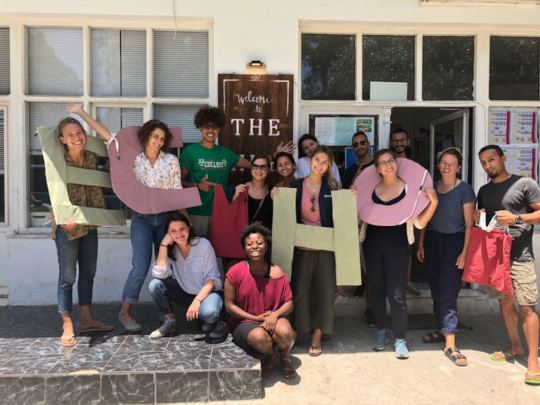 By Catharina Kahane - Co-Founder of Echo100Plus 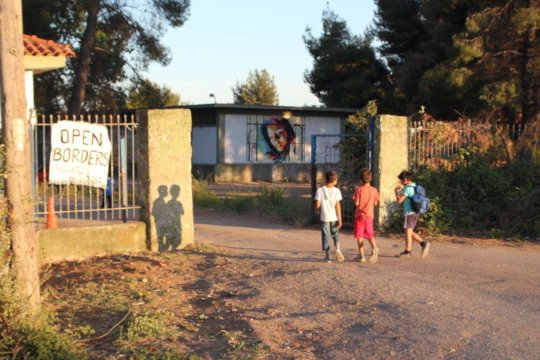 this is to inform you, that in October 2017 our organisation - Echo100Plus - ended all operations at Ritsona Refugee Camp in East Attica/ Greece. The decision to leave was certainly not an easy one! After one and a half years on the ground, and with the certainty that the approx. 850 camp residents were adequately taken care of by the authorities and other NGOs, we decided it was time to move to new challenges and to more impact.

Within the 18 months of our presence, the living conditions in the camp changed substantially and we are proud to say, that Echo100plus and its more than 250 volunteers certainly played a key role in this.

Since our arrival in March 2016, we focused on logistics and the instalment of a central distribution platform at camp. We renovated and refurbished the former dining hall of the Air Force base, in which Ritsona Refugee Camp is located. This became our warehouse and the main storage and distribution platform on site. Three times daily, our 10 to 12 volunteers handed out approx. 800 meals, drinking water and bread, catered by the Army. As water and bread rations were all too often in short supply or at times not provided for at all, we regularly had to stock up at our own expense. (Especially in the hot summer months the drinking water provided by the authorities was criminally low!)

In addition, Echo100Plus provided hygiene items and other vital needs such as tea, coffee, sugar, milk and cooking oil that were distributed once a week. And last but not least, we organised and stocked up the so-called “Ritsona Boutique”, in order to facilitate a dignified clothes and shoe distribution to the residents, their only source for clothing at camp. To keep the “Boutique” stocked, Echo100Plus recruited and organised in-kind-donations on a large scale from within Greece and abroad – a major logistical task - to store, sort and prepare for distribution. Again, Echo100Plus filled in the gaps by purchasing clothes, when items were running out.

Although logistics and distribution tasks were our main mandate at camp, our volunteers were always eager to share extra time to engage the camp community in activities in order to break the monotony and desperation of daily camp life. With their hands-on help and your generous donations, Echo100Plus was able to

-       refurbish another ruinous army building at camp that hosted multiple activities: a carpentry workshop, allowing residents to construct their own furniture, art therapy workshops for children and minors, run by the “Flourish Foundation” and a fitness studio, where our volunteers ran yoga and gymnastic classes

-       finance and oversee the construction of a football field, sponsor three adult, one minor’ and five children’s soccer teams and initiate a soccer programme in cooperation with ISMP (International Sports and Music Project), an NGO run by one of our volunteers

-       facilitate a “Refugee Vision Programme” in cooperation with the NGO “Cross Cultural Solutions”, that checks eye sight and provides glasses to the residents

-       run a laundry, where residents could wash their clothes

-       organise and implement a variety of social activities such as the “Ritsona’s Got Talent” show, movie screenings and beach trips for camp residents

Before leaving Ritsona Refugee Camp, we tried to make sure, that our services would remain functioning and that residents would not be affected by our departure. We chose and instructed the international NGO “Cross Cultural Solutions” as our successors, and after a few weeks of working side by side, CCS was ready to take over all our operations at camp.

Without your generous donations and the help of our amazing volunteers, that followed our call to help us on the ground, none of this would have been possible! Thank you from the bottom of our hearts for helping us make a difference!

To find pictures and films of our time in Ritsona, please visit our website: http://www.echo100plus.com/en/projects/project-4

Echo100plus has left Ritsona camp, but is still very active in Greece. Continuing support is very much needed for other projects! If you are interested, visit our other projects on the Global Giving platform. 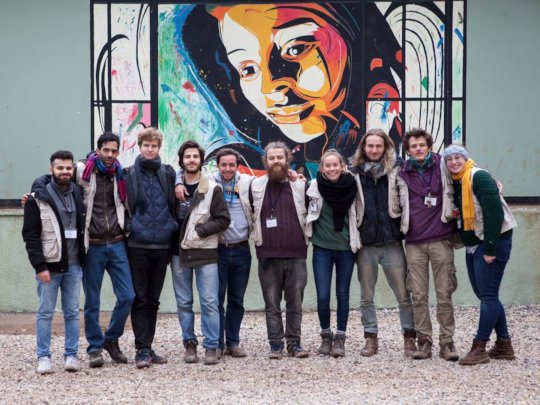 Echo100Plus Volunteers in front of the warehouse 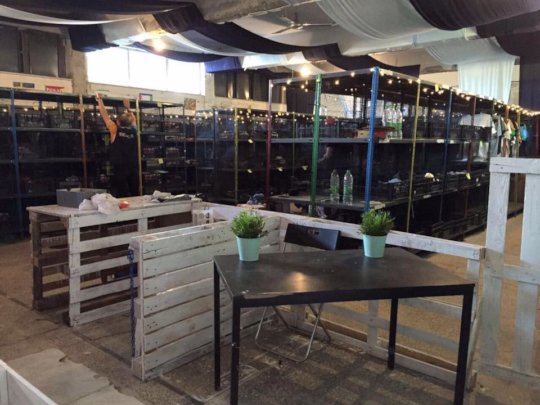 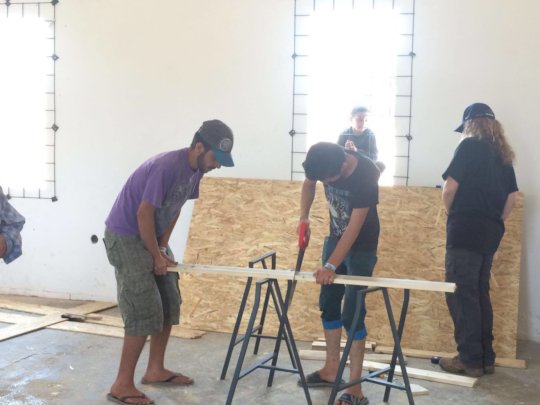 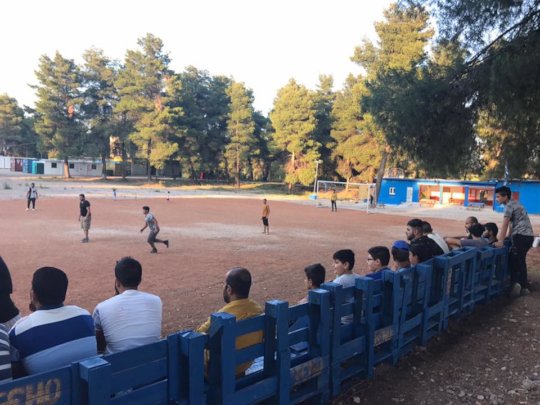 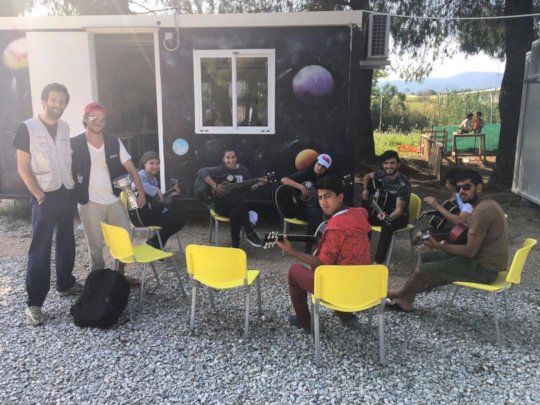 Guitar class in fron of our Classroom container 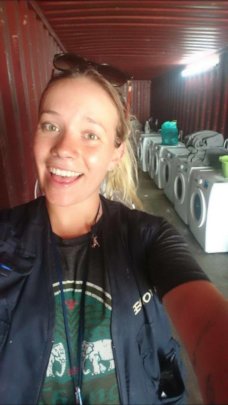 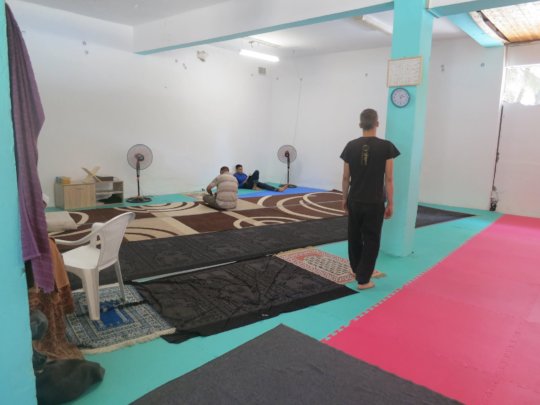 Ritsona Camp's Prayer Room
‹ 1 2 3 4 5 6 7 8
WARNING: Javascript is currently disabled or is not available in your browser. GlobalGiving makes extensive use of Javascript and will not function properly with Javascript disabled. Please enable Javascript and refresh this page.