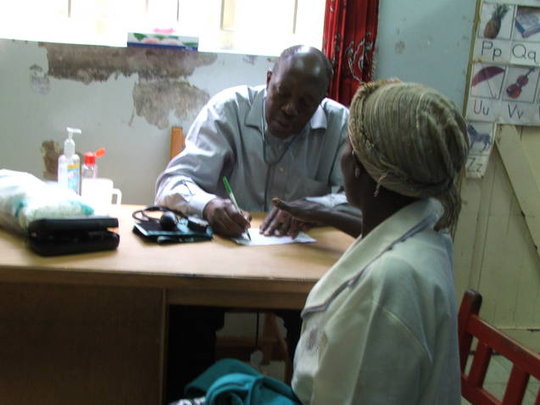 During a recent St. Vincent's board meeting in April, a young girl came to St. Vincent’s with sadness on her face. Although the girl refused to speak, St. Vincent’s learned through her cousin, Peterson, who accompanied her, that the girl’s name was Lilian and she was a double orphan, having lost both of her parents.

Peterson explained to St. Vincent’s that they came to seek financial assistance to help Lilian undergo a needed operation to remove a tumor that had been detected during recent medical tests. Lilian’s family tried to seek support from friends and relatives in the Kibera community to cover the Ksh 100,000 (approximately $1,200 USD) procedure, but had failed to collect even a quarter of the needed amount.  In the meantime, Lilian dropped out of school due to her condition.

The family then learned about St. Vincent’s through another local school, Shine Academy. St. Vincent’s has become known in the community as a trusted, reliable resource to which people can go when they are in urgent need of support. Weekly meetings open to the community, such as the one Lilian and her cousin attended, help identify those families in greatest need and St. Vincent’s works with families to identify solutions and harnesses its networks to ensure families are connected to additional services when needed. Through this approach, St. Vincent's program creates a safety net for families in the community so that they are able to continue caring for the children.

On their first visit, St. Vincent’s encouraged Lilian and Peterson to try to raise the additional amount needed by holding a fundraiser in one of the local public spaces easily accessible to friends and relatives.  The pair returned weeks later, reporting that despite their efforts, they were still unable to secure the necessary amount. And now, the cost of surgery had been increased due to its urgency. With no other viable options available and the need for the surgery immediate, the board members promptly decided that St. Vincent's would contribute the balance so that Lilian could proceed with having the surgery without further delay.

Two weeks later, Lilian and Peterson once again came to the board meeting, this time around with good news. The operation had been successful and Lilian now had hopes to return to school. Lillian shared with the board her future ambitions to become a doctor so that she could save lives for the less fortunate in the community. Lilian has since been enrolled in St. Catherine Nangina Girls boarding primary school in Western Province, Kenya where she is in Class 6.

Mildred Wesonga, a local high school student who attended the medical camp commented: “Here, the personnel were very friendly to me and for the first time, I find this very relaxing. As from experience, most of the doctors I have visited were not friendly to me in the local clinics in Kibera. My prayer is that we should have more of these camps annually to help us community members.”  Mildred attended the camp because of ongoing chest pains she had been experiencing.

An interview with one of the nursing students working at the camp, Carolyn Lay, says of the event, “It was really good to give a listening ear to people as they tell you what ails them and by the end of the day, the trust they all have in you…. But for me, the most inspiring thing was to give education to the sick people who showed up.”

A total of 576 children and families received medical and dental care and treatment at the event. 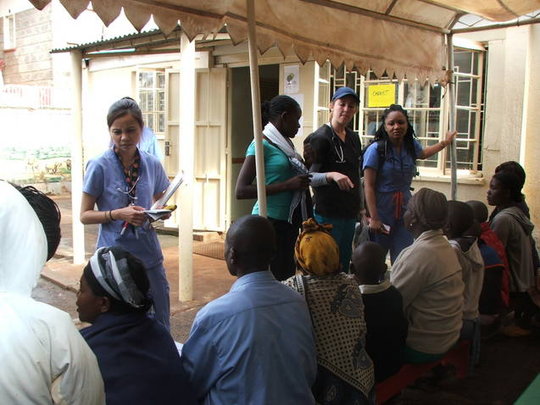 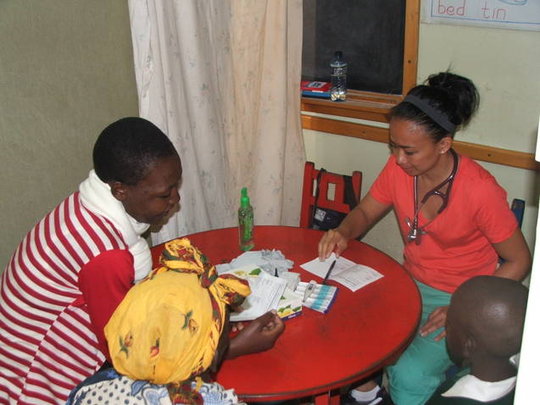 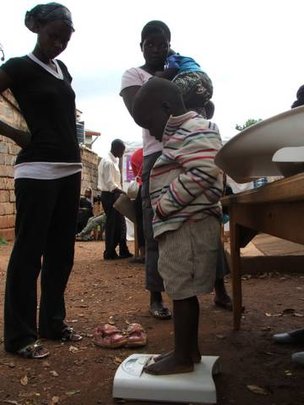 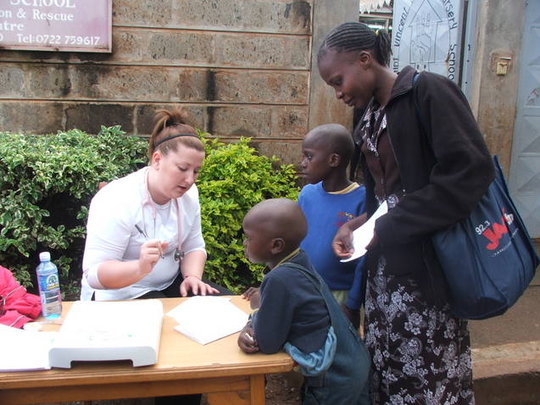 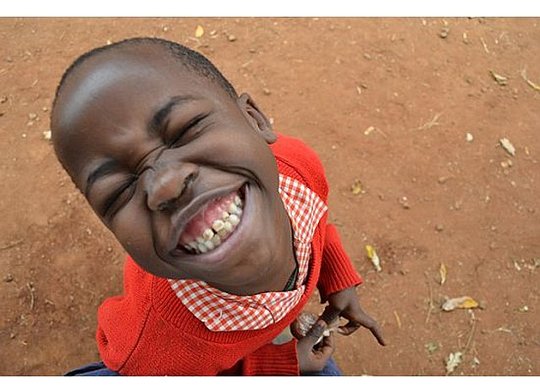 Big Smile for the Camera

St. Vincent’s is pleased to share with you this report on its work in 2011. Thanks to your support, the organization has been able to accomplish the following in the past year:

Established in 2000, St. Vincent’s Nursery School provides a safe place for children to go during the day where they receive education from a trained and dedicated teaching staff and two daily meals. This service enables parents/caretakers to seek work, while children are accompanied in a safe environment.  St. Vincent's subsidizes school fees depending on families' ability to pay which allows the most needy and vulnerable children to benefit from our program.

In January 2011, St. Vincent’s enrolled 25 new children into our Nursery School’s Baby Class, bringing the total number of children at the school to 78. Early childhood development programs, such as St. Vincent’s, are among the most critical interventions for protecting vulnerable children: they increase the capacity of families to care for children and are a proven cost-effective measure for investing in children’s long term development. Despite these positive attributes, today fewer than 1% of children in Sub-Saharan Africa have access to early stimulation or pre-school programs.

St. Vincent’s Nursery School children come exclusively from vulnerable families and the majority of newly admitted children are malnourished and present with stunted growth and thus, are particularly susceptible to disease and infection. By the end of the year, through the nutrition services provided by St. Vincent’s, most of these children have grown and developed and are now in fine health. In addition, the care and attention provided by Nursery School staff is essential for personal growth and development, which enables children to develop healthy self-esteem and ultimately to facilitate healthy interactions with peers from different backgrounds.

In 2011, St. Vincent's supported a total of 17 children through its Rescue Center. Eleven children lived full time at the center where they receive shelter, care & support, and attend local schools in/around Kibera. Children at the Rescue Center are also provided opportunities to interact and associate with their relatives in preparation to fully integrate back to their community in the future. In addition to the children living full time at the Rescue Center, another six children were supported remotely, whereby St. Vincent's covers children's boarding school and transport fees and provides shelter/care & support for children during school breaks.

St. Vincent’s takes a whole family approach to its service provision; utilizing our nursery school as an entry point into households and then working with families to identify and address the basic needs of the entire household. This includes helping caregivers to start businesses, assisting families with children’s school fees once they leave the nursery school, providing food to HIV-affected families, helping families to secure shelter and covering medical fees of children and families.  St. Vincent’s weekly meetings, which are open to the community, provide a forum for identifying families with additional support needs. St. Vincent’s draws upon its existing networks with other service providers and allocates additional resources to ensure those families are connected to additional services. Through this approach, St. Vincent's program creates a safety net for families in the community so that they are able to continue caring for the children.

Health & Nutrition Services: In 2011, St. Vincent’s supported at least 23 children and 5 parents/guardians to receive medical treatment and an additional 9 food insecure families with nutrition support through food rations.  For children and parents in need of medical care, St. Vincent’s accompanied them to the clinic or hospital if needed, purchased medication directly, discussed medical regimes with clinics or pharmacies, and helped track adherence to medication regimes.  Parents/guardians who were sick and bedridden received both medical and nutrition support, thus expediting their recovery period and enabling them to support their families independently, as before.

Education Support:  St. Vincent’s maintains relationships/contact with the children and families it serves even after children leave the nursery school, following children to primary school and beyond to ensure that they continue to grow and flourish once they have left our care.  In some cases, St. Vincent’s provides support for children to be able to attend primary and secondary schools, when families are unable to cover these costs.  In 2011, St. Vincent’s covered the school fees and related costs for 10 nursery school alumni to attend primary and secondary school. 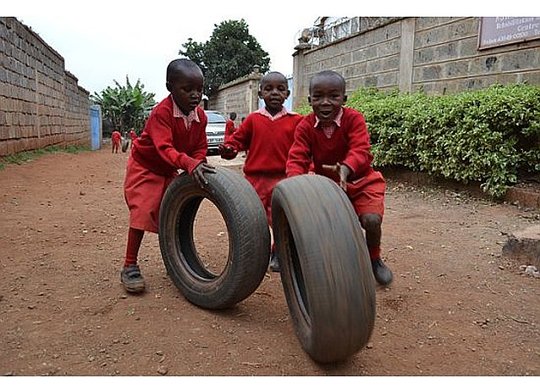 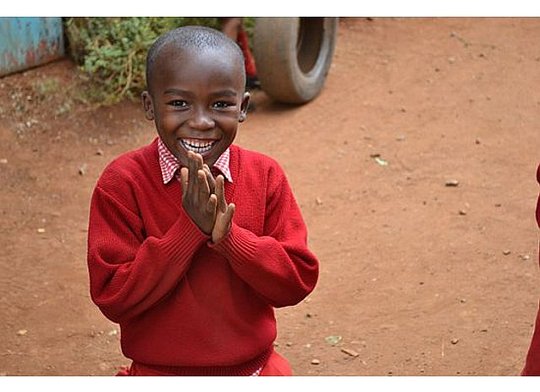 Give the Gift of Giving This Holiday Season and Help St. Vincent Raise $$

Need a creative gift for someone who has everything? Global Giving is making contributions to a select number of its projects for the sale of Global Giving gift cards -- a unique holiday gift!  Every time 500 gift cards are purchased from the Global Giving website, Global Giving will give $500 to one of its projects -- and as a SUPERSTAR partner organization, St. Vincent's made the cut! If 7,500 cards are sold by December 31st, we will receive a $500 grant. You can track how close we are here: http://www.globalgiving.org/gifts/ . As of November 28th, over 1,300 cards have been sold!

A Thank You to Our 'One Night' Supporters

On October 20th, St. Vincent's held its first Boston fundraising event, One Night for Their Future, at Middlesex Lounge. With over 30 supporting business and approximately 75 guests, we successfully raised over $11,000 for our operations! The event included a silent auction, raffle and live Skype chat with Director, Lucy Kayiwa. These funds will keep our doors open to the children and families we serve for several months! Many thanks for all those that helped to organize the event and of course, all those that contributed!