Home is the place where dreams do come.

Since 2010, the dreams of more than 100 locals have been fulfilled thanks to the generosity of our donors. Clara Luna has been serving as a gathering place and a dreaming space for the children, youht and families we serve. We continue dreaming and our community deserves this permanent house, to develop community initiatives and programs.

The children of Puerto Lopez need to know that we are here for them on a permanent basis. In an ever changing world, children need the confidence of familiar surroundings such as the reading room in our building and the art areas where they have spent many interesting hours expanding their horizons in literature and the arts. 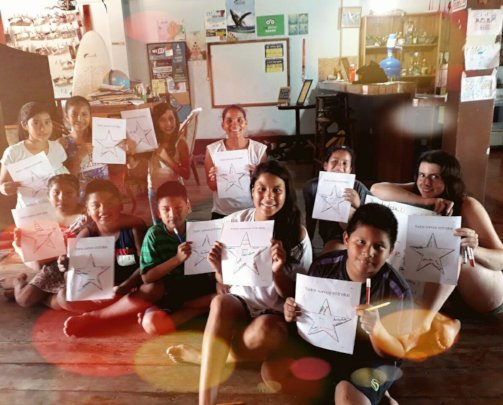 December at Clara Luna was all about Human Rights. A We started off with creating a special “Clara Luna Human Rights Bill”. On a big wooden board the kids and their parents signed a declaration with their  Right handprints symbolizing human "rights" in the colors of Ecuador. The declaration said: “Todos los seres humanos nacen libres e iguales en dignidad y derechos (All human beings are born free and equal in dignity and rights)”. The process of creating the declaration evoked emotions and a sensibility for the importance of maintaining these rights. We also introduced Club De Niños to “Imagine” by John Lennon. Next to listening and signing the song, Paola discovered a book that contained the original lyrics with a Spanish translation and images that illustrated the message of the song and the Human Rights topic.  The following weekend the Jovenes were part of a project that was created by “Mingas por el mar”, an Ecuadorian organization that cleans up beaches on the entire coast of Ecuador and provides information about how trash, especially plastic, threatens the vitality of our oceans and its biodiversity in general. The teenagers, Paola, the Mingas por el mar team, other volunteers from Puerto Lopez, and me met in the morning on Saturday. We started off with a small presentation about what happens with trash after it is irresponsibly disposed into the ocean and how it ends up being part of every organism in the water in the shape of micro plastic particles. The moral of the presentation was to especially prevent the usage of unnecessary plastic products. Afterwards we gathered and walked along the beach of Puerto Lopez to collect trash. It was interesting and alarming at the same time: most of the trash were the “unnecessary plastic products” we were taught about – things like plastic bags, toothbrushes, cups, straws, and of course candy wrappings. At the end we sorted the trash to put it onto a wall at the beach front that we had painted blue before. When you walk by this work of art automatically catches the eye and makes one aware of the two problems we all have to faces and solve: how do we create less trash and how do we dispose it responsibly.

January after the Christmas break we dove into the world of magic. The magic was amusing not only for the kids, but also for the volunteers. Ed, Lino, Paola, and Nina very enthusiastically practiced magic tricks, which they can presented to the kids. We became proper magicians and even amazed each other with our magical abilities.

The children from the “Club the de Niños” read by themselves, as usual, then Paola read them a related story about magic. Afterwards it was time for the show by our magicians. One after the other we showed our tricks; Lino had some card tricks, Ed had the magic two-dollar bill and the magic coins, Paola made the coins disappear and reappear and Nina had the magic flying bottle and the magic spoon. Wow, you should have seen the faces of the kids!!! Amazing! They were completely shocked, sitting there with their mouth wide open! We said, Mission Completed!With the “Club de Jóvenes” we looked at the subject evolution. We explained evolution to them, showed them videos and got them to know Charles Darwin and his evolution theory inspired by the Galapagos Islands.

To finish our magical month, we got totally bedazzled by the laughs, smiles and energy of the disabled kids during the surf lesson, simply magical!!!

February began with the Popular Consultation Vote in Clara Luna. Every member of Clara Luna got an ID card for the  “Republic of Clara Luna” and secret ballots on which they voted yes or no on seven questions concerning future activities of the foundation.  Ex: Would you like to meet an author?  Yes!!  This activity paralleled an actual Ecuadorian vote where the population voted on constitutional amendments.

To celebrate Darwin’s birthday , we did activities about evolution.  From the book “Grandmother Fish”, we did all together a big evolution tree. The volunteers, Ed, Nina, Yesica and Marina had fun preparing the activity.With the help of a Peruvian art therapist,  Luciana,  the Children’s Club also did some theatre. We all became fishes, monkeys, dolphins…After that, we read a story about Darwin’s life and told it, then played it.

On a  rainy day, after carnival, a motivated group went to clean the beach in an event sponsored by the Ministry of the Interior and Conservation International. Together we collected hundreds of pounds of trash. We all want to protect our planet and our cousin animals. Good job!The Disabilities Club worked on the conservation theme, and they also went to surf twice on Thursdays! They were great afternoons, because of the beautiful sun and special help from Adam and the surf crew from Ayampe.

The Youth Club talked about sexual education. It was a really interesting exchange with the teenagers. They know a lot of things, but they are sometimes confused because of what they can see on movies. On Saturday, after el club, Yesica teached us acro yoga on the beach. The kids loved that and they planed to do it each Tuesday. 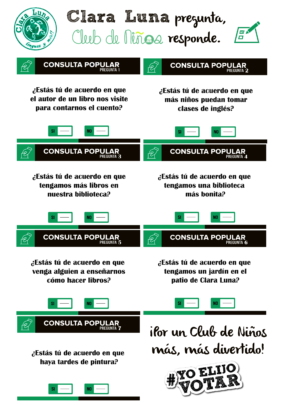 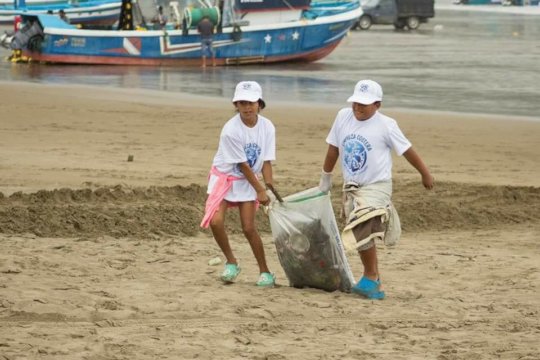 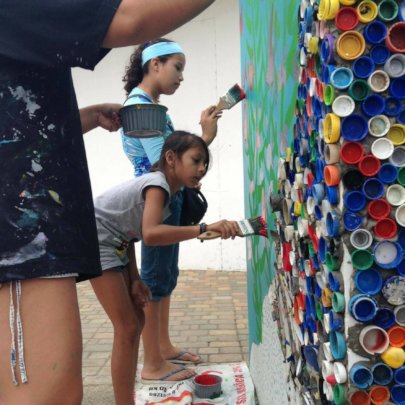 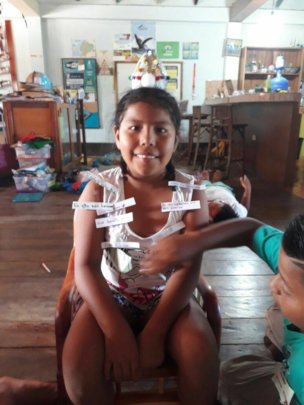 Tagging who I am 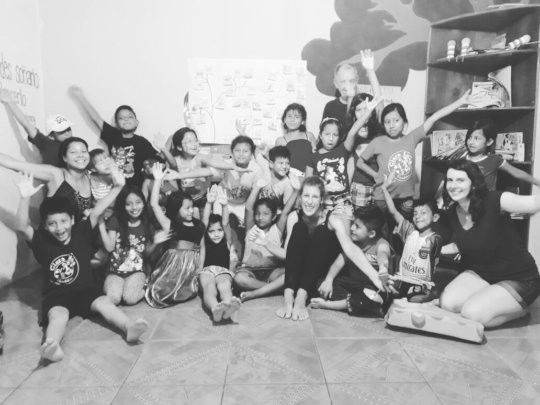 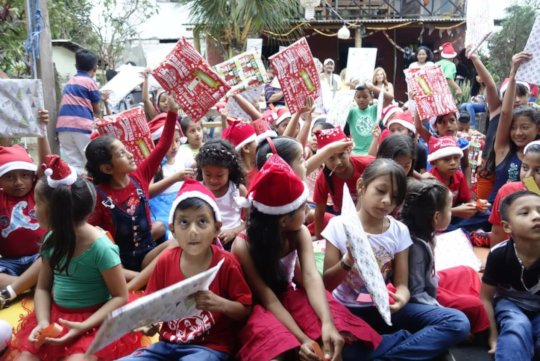 We continue on the roads with Mobile Libraries 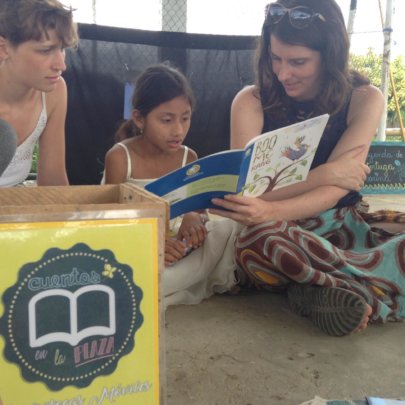 The work of bringing books, cultural activities, and entertainment to the children of earthquake ravaged north of Manabi province continues.

In January for our trip to the north we prepared the magical puppet show “El Mago de Oz” (The Wizard of Oz). For this we received help from the new volunteer Jade. Together Volunteers Ed, Jade, Lino and Nina made the puppets with felt, cardboard, cloth and buttons. The famous Oz characters of Dorothy, Scarecrow, Tinman, Lion, Wizard and two Witches, one Good and of course, one Bad were created. Our first performance was before the assembled “Club the Ninos” on a Friday afternoon in Puerto Lopez. They really enjoyed the show and it was a dress rehearsal for our trip north.

Then we were ready to go on tour to the kids in the earthquake region up north. Very early Saturday morning we left by bus. Our troupe managed to inspire and fascinate these kids with the puppet show and our simple magic tricks. They also became true magicians with their self-made magic wands. It was an unforgettable experience for all of us.

Reading with them was a special treat as well, because you could tell they really needed the practice made possible through the Clara Luna Foundation.  It was amazing to be able to make the children laugh and be happy!

In February we traveled with Joseph, Yesica, Paola and Marina to the north with the Marin turtle story. In spite of the rain, the kids of San Vicente, Tabuchila, Canoa and Chone seemed very happy  to have books to read, volunteers to read with them, the puppet show, the games and Marin the handcrafted turtle. 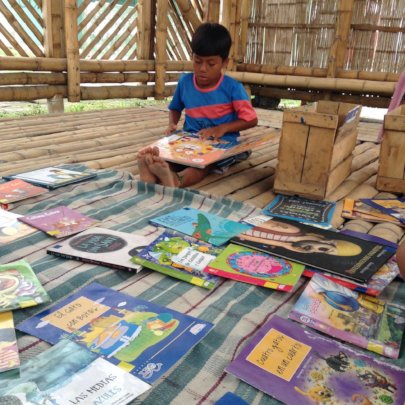 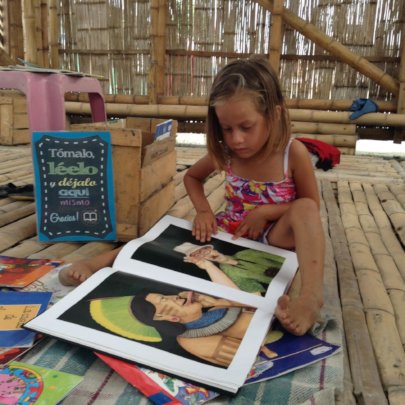 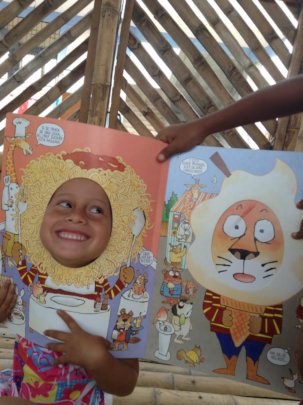 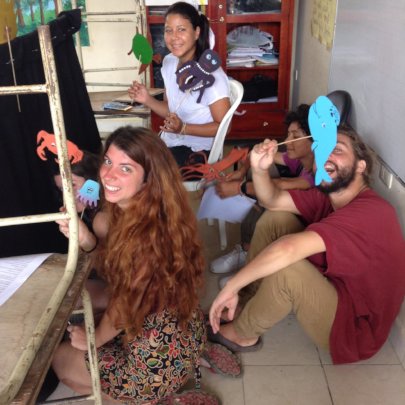 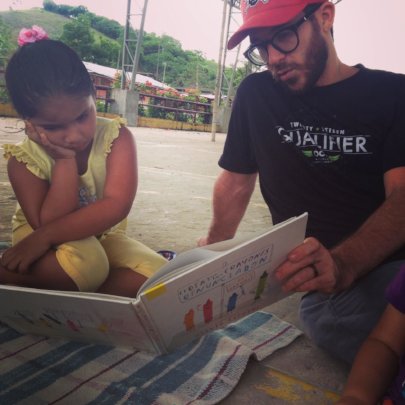 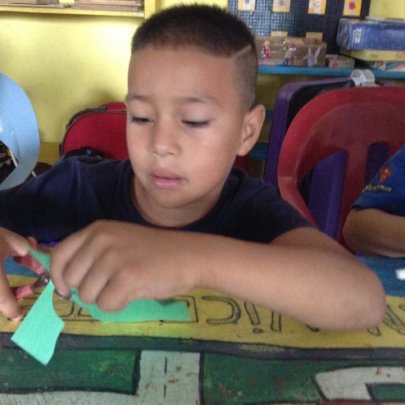 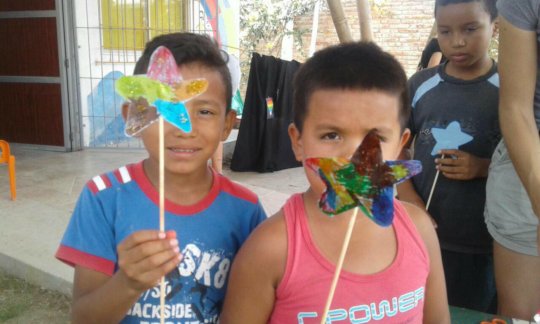 ‹ 1 ... 7 8 9 10 11 12 13 14 ... 16 ›
WARNING: Javascript is currently disabled or is not available in your browser. GlobalGiving makes extensive use of Javascript and will not function properly with Javascript disabled. Please enable Javascript and refresh this page.