We need to do more! 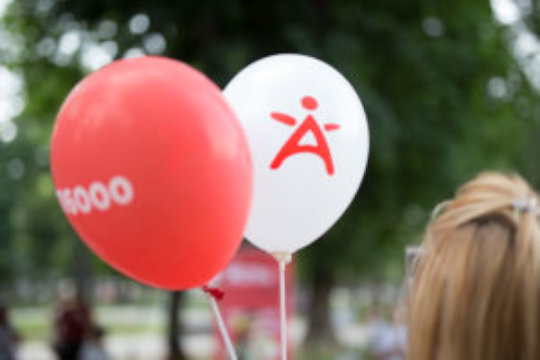 We were all in situations in which we were asking ourselves whether we could do things differently or better and what would have happen if we... when is the turning point when the things became bad and irreversible… In the missing children cases it is necessary to be aware of how prompt reaction, efficient investigation and finding of the child is not the end, but rather the beginning of long-term support to the child.

At the recently organized training and practice exchange for prosecutors organized by ASTRA, a case of a runaway girl was discussed. She was reported missing by her father through European number for missing children in Serbia. A victim, Tanya (14) felt unwanted by her parent and she lost the communication with them. In the same time she was searching for her own identity and her own place in the society.

First time she ran away, she was found and placed in the institution for the protection of children, under the decision of the Center for Social welfare. As there was a suspicion that she was sexually exploited we were involved in assistance, too. No work with her and her family was done by relevant public institutions.

Very soon, Tanya escaped again. When she was found for the second time, it turned out that the suspicions about exploitation were true. Her situation and circumstances, inability to deal with family problems, trying to find the personal path in the period of life when emotional instability is common, were exploited by the young man who seduced her. Initially, he has given her attention and had been there for her, talk with her, pretended to listen and understand her, substituting the attention she didn’t receive by a family and institutions, peers and school provides her with something very important she had not had in her own home, in school, with peers. He quickly earned her trust, he began with abuse and punishing, justifying his own actions as proof of love. “ ..He just wanted to teach me how to be a real woman….”and then he forced Tanya in the prostitution. Soon after she was found for the second time, authorities started criminal procedures that ended with a human trafficking conviction, and defendant was sentenced to high prison terms for the sexual exploitation of a minor.

Due to Tanya’s specific situation, ASTRA was not allowed to continue working with her. We thing that public institutions omitted to apply every possible means of support to Tania and her family. Tanya is still unstable, still lacking of trust….she might get into troubles again... 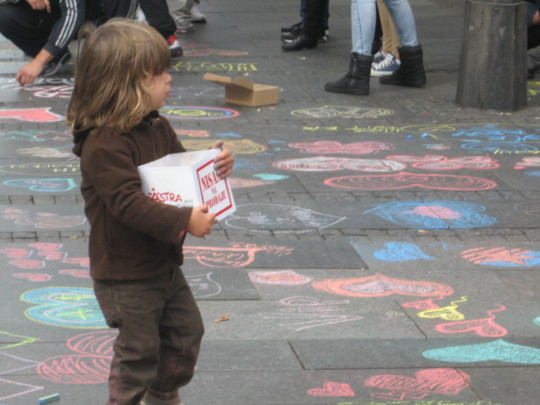 Timely assistance and support are essential 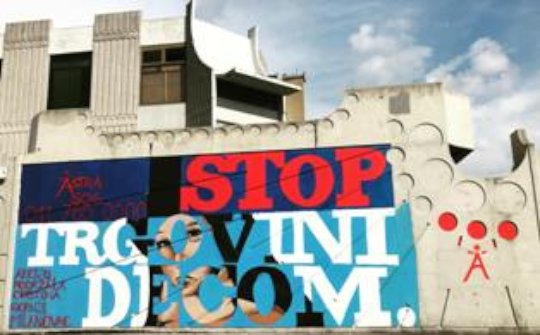 Ana contacted ASTRA in July 2018 and ask for help. Her story is shocking: she was still a girl of 13 when she was sold for the first time by her family for a forced marriage, to a family in a foreign country. She was in addition exposed to sexual abuse, psychological and physical violence by other family members and their friends, and during the several years of exploitation, she was forced into begging. She was never able and too frightened to talk to anyone. She was ashamed and thought that she is worthless: „...I  thought that I was guilty and that I deserve it, it became my way of life,  didn’t know for any better...“

After several years of starving and fighting for bare life, she managed by the occasion to escape the torture she had gone through. She met Bojan, a young man who was also a victim of trafficking. Together, Ana and Bojan, becoming her husband, managed to escape. They returned with their children in Serbia. But this was not the end of their suffers.

Upon return, Ana reported her case to the police. When she and her husband tried to apply for assistance at the social welfare center, an institution in charge of providing long-term assistance to victims, they were thrown out of the office! And then Ana found ASTRA.

Half a year without an answer and any assistance by a public institution – imagine how long is this period for someone who has survived human trafficking and who is not yet integrated into society, who is unemployed and have no basic means for the living! What is the possibility of reintegration of victims of trafficking in human beings, when the social protection system does not recognize the urgency of the situation or when the basic needs of the users are not met?  Ana told us: „ I cannot think of what could happen to my children if you didn’t help us. We were starving. You returned my hope for life.“  This is motivation to us to continue our work and never to give up! Each little step in this process, every little victory and every assistance is important to change someone life for the better!

Many nice things happened in the previous period:

Without your support, many Ana and Bojan would not succeed! Thank you for being a part of the change, making a life better for someone who survives human trafficking. Stay with ASTRA and follow our actions! 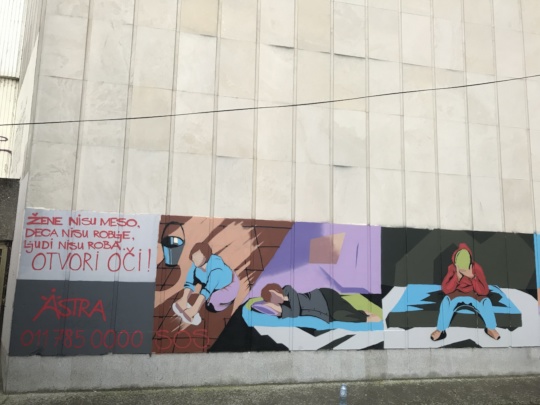 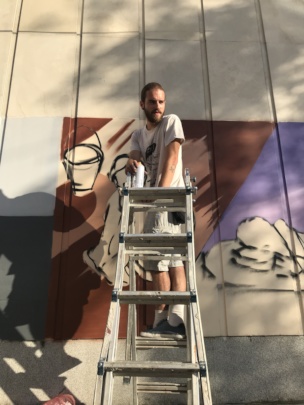 Process of painting the murals 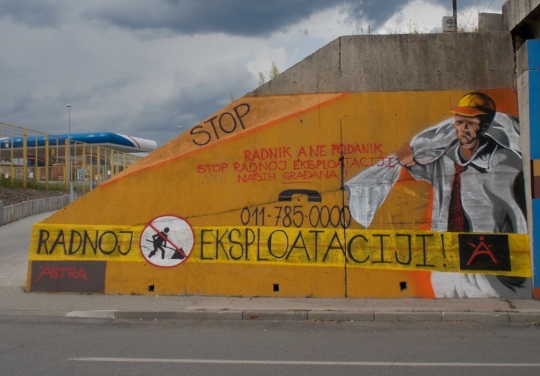 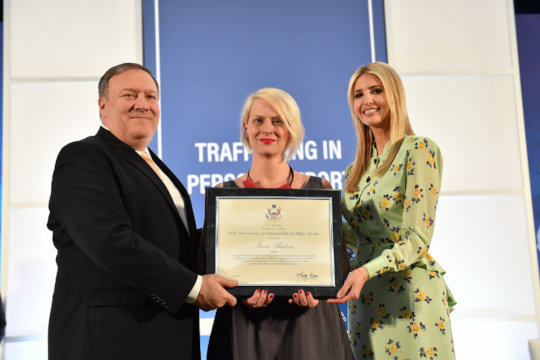 ASTRA's representative as a TIP hero

It is our great pleasure and honor that ASTRA’s longstanding work has been internationally honored, and that we have been announced as a Hero in this year’s Trafficking in Persons report of the US Department of State. This is the first time that the award comes to Serbia and to the organization which has been committed to the fight against all forms of exploitation for 18 years.

Each year, the Department of State honors individuals around the world who are committed to the fight against human trafficking and who contribute to the increased protection of the victims, and this year it is Ivana Radovic from ASTRA. The award for the TIP Hero represents a sign that ASTRA is an internationally recognized organization, that the values and principles we insist on in our work have contributed to the fact that we have become relevant partners in a global response to the human trafficking issue.

The Director of ASTRA, Marija Andjelkovic, has said on the occasion: “Our heroic work has contributed that the issue of human trafficking in Serbia is recognized by individuals, as well as by the organizations, which evolved along with ASTRA’s initiatives and proposed solutions. We can promise, as an organization, that we will not cease to advocate for the improvement of the rights and protection of the victims of human trafficking, to offer direct help and support to the persons who survived exploitation, and to work on prevention of this type of continuous violence.”

The Trafficking in Persons report of the US Department of State was published on June 2018 and Serbia is this year again within the Tier 2:

“The Government of Serbia does not fully meet the minimum standards for the elimination of trafficking; however, it is making significant efforts to do so. The government demonstrated increasing efforts compared to the previous reporting period; therefore Serbia was upgraded to Tier 2. The government demonstrated increasing efforts by consolidating the jurisdiction for trafficking crimes under one authority to improve investigations, and by creating a stand-alone Office of the National Coordinator that effectively elevated the national trafficking coordinator to a full-time position. The government adopted an anti-trafficking strategy and action plan, allocated 8 million dinars ($79,950) to its implementation, and mandated the reconstituted national anti-trafficking council to meet at least twice a year to coordinate anti-trafficking efforts. However, the government did not meet the minimum standards in several key areas. The government continued to lack formal victim identification procedures and the national referral mechanism lacked established roles and responsibilities for referring victims to support services. The urgent reception center, designed to provide safe shelter and services, was not functional for the fifth consecutive year. Judges did not consistently assign the status of “especially vulnerable witness” to trafficking victims and the government did not uniformly apply non-penalization principles for trafficking victims. The number of trafficking convictions fell for the fifth consecutive year.”

This award is evidence that our so far work has yielded relevant results and that it represents an encouragement for us to work even more actively, motivated and hard. 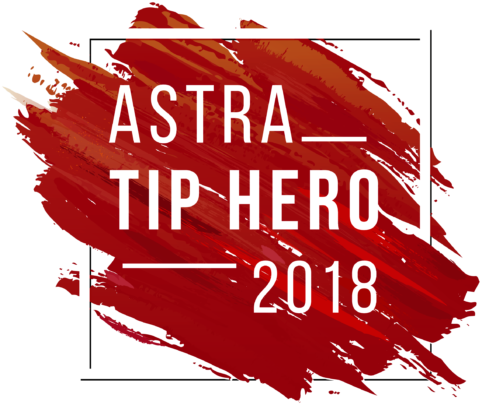