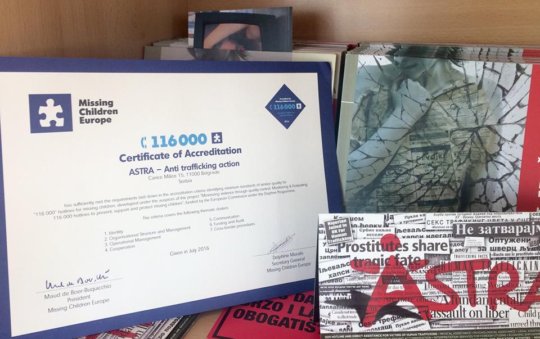 In the last 4 months European number for missing children 116 000 in Serbia was contacted regarding 4 cases of missing children, two girls and two boys. All cases were solved positive, and the children were found safe and sound.

During this period we heard about Maja, 13-year-old girl. Her mother passed away and her father got married again. He was very violent with his children and wife. Constant fights, domestic violence are something that Maja watched and suffered on a daily basis. At home she was often hungry, and her father found her guilty for everything bad happening to him privately or at work. He insulted her, pulled her hair, beat her. Because of all these problems, she started missing school. Social welfare centre got involved and because of the family violence they placed Maja in a foster family.

One day Maja went out to the grocery and she did not return home. Foster family and the social welfare centre reported her disappearance to the police. Eye-witnesses told that she was in the company of a younger man.

After some time, there was still no progress in the search for Maja, and social worker contacted ASTRA for a support in search for missing girl.

The same moment we received a report we contacted the police with all information we received.

Next day we received call from social worker who contacted us, she said: ''The girl was found! After you contacted the police, they again went to the place where we suspected that the girl was, and this time they found her there. Maja was very afraid, but she was relieved when she saw familiar faces''.

When the representatives of the Centre wanted to check whether their assessment of foster family was bad which led to girl running away, the girl confirmed thatshe felt accepted there. But she added: ''Fear is something that I wanted to escape from. I felt I was not far enough from the one who hurt me the most. I wish no one has to go through what I went through at home, and I do not want it to happen again. I wanted to run away from that fear!''

Maja returned to the foster family, she continued to go to school, she is going to counselling and she is involved in ASTRA program with the aim to strengthen her capacities.

An important segment of our work is the development and promotion of cooperation with all relevant institutions which are included in a search for missing children or other organisations which can assist in that process and give support.

We have so many great ideas for kids like Maja, for children in risk, but we need your help and support for its realization. Help us to become recognized by all citizens, as well as to develop prevention programs and activities for children, parents and citizens in general. Support us and be part of this development! 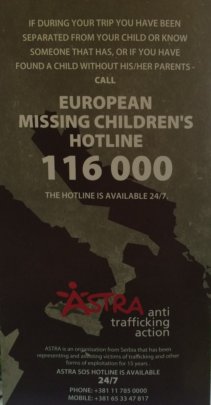 Thousand questions, only one answer. 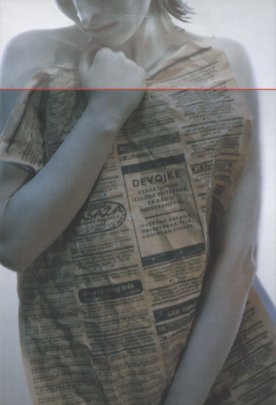 ASTRA-Anti Human Trafficking Action is an organization that arose from the need to provide assistance and support to victims of various forms of exploitation, which at the time when the organization was established were not identified, nor by the system, nor by the society. Human trafficking, a phenomenon almost as old as society, but in Serbia legally recognized only in 2003. A few years before the introduction of the crime of human trafficking, it starts our struggle which is not slowing down for fifteen years. The only thing we never lacked during all these years is the desire and energy to help the victims, to enable them to recover into society after a traumatic experience and the return of faith in a better tomorrow. Like every social problem, and human trafficking, and addressing this problem requires a comprehensive coordinated work of all relevant actors in society, how to eliminate the consequences and to provide all necessary forms of assistance to victims, and prevention of problems and creating a social climate in which human trafficking is not happening.

Failures are parts of life and we eventually learn how to deal with the failures and most importantly, to learn from them and to stand up even stronger. We provided help and support for over 480 victims of human trafficking. Different life stories, different circumstances, diverse characters of individuals, but one thing is the same, the trauma that has survived. Each victim is our loss, the decline of society and the state that failed to provide them with the basic requirements for a decent life, but also our failure, because we are part of the society that we are trying to correct. We provide all kinds of assistance to victims of human trafficking including legal, psychological, medical, alternative accommodation, food, clothes and shoes, etc. Material things is not difficult to obtain, but the battle for finding continuous funding is more difficult, but it is important not to give up. However, trafficking is a betrayal of all that is good and decent in human relations. The trafficker deprive the victim of her humanity that is very hard to catch up after one of the caused damage. However, our biggest falls are seen in situations where clients from a variety of reasons return to her/his trafficker, which means that it is not fully empowered to move forward, to continue their lives in freedom.

Our biggest loss was when at the end of a strenuous struggle, which lasted 10 years, and the trafficker won. In fact, one night we had a call from a police officer from the nearby municipality. The girl was detained with big black eyes, who was shaking with pain and fear. She was detained because of the possession of narcotics, but they realize that there are elements of human trafficking. She was forced to sex work, and forced to drug use. They beat her every time she did not want to do what they asked for her clients. She tried to escape, but did not prosper. We gave her first direct assistance, but after that we tried to reintegrate her into society. That night, when she had nowhere to go, we put her in our office. She was terrified. We told her she was secured. She cried in the silence. As the night wore on, she began the story admitting that she was sold by her boyfriend and that she was abused by him and his friends, and other men. We tried to help her and to provide her accomodation and better life, but we did not succeed. She reurneed to his boyfriend who countinued to force her to sex work. Again her hell started. All the same, there is no change.

Experience teaches victims of human trafficking harsh lessons about the inherent cruelty of other human beings. "My wounds are inside, you have not seen," say the women who survived human trafficking chain. Us, as assistance providers, this definitely strengthens the desire to heal these wounds. Sometimes we succeed, but sometimes not. Failures are there, but we're not giving up in the fight for victims and in fight to bring the smile back on their face and the will to live. The hardest part in this constant struggle, is to reintegrate them into the system, without additional re-traumatization. The system only recognizes the problems that are visible. Our intention is to provide support to these people and to jointly fight to regain their rights, in order not to become victims again.

Many times we wonder why we do it, it is exhausting, difficult, and we hear terrible life stories that have to leave the consequences for ourselves-members of the organization. But there is only one because. Because we need them. They need a place where they feel safe, loved, protected and understood. We may be regarded as the black sheep of the degraded society, but we will continue to work on our mission. Dr. Michael Korzinski says that the victims are members of society whose problems represent memories of suffering, violence and pain in the world that society tends to forget. We do not want to forget, we want to make up for the suffering, and despite all the obstacles they are into, continue in their attempts to prevent this problem, and protect the victims who survived the experience of human trafficking.

One night, while our client, young mother of a 5 year old child, was putting her daughter to sleep, someone throw a large stone on her window,  that flown right next to her child. She looked through the dark and saw faces of trafficker and his collaborator, from whom she escaped few days ago. They found her family house and decided to take revenge and scare her in order for her to return to work for him. They broke the door of her house, went straight in, yelling at her and threatening to kill her whole family. Luckily, they just wanted to scare her that time so they left threatening that they will return.

Terrified for their lives, she run to local police station, but police officer who spoke to her did not recognize seriousness of the situation, he made fun of her, telling that she has to find help somewhere else, because such thing as human trafficking does not happen in their town.

She tried to find help on the other place, so she looked on the Internet. Luckily, she found ASTRA Hotline number and called us saying: "Please do something! I have no one else except you".

Soon after, they went all together to the police once again, but this time to the chief of the police to file a complaint. He reacted fast because he realized that the police made a mistake the first time. They started investigation and our client received necessary protection for her and her family.

After that, still under impression of everything that happened she told us:

“I have to admit something... I was so desperate, in one point I was thinking to return to him or to kill myself just to save my innocent daughter. She doesn’t have to suffer... But you saved me! Thank you, thank you. You are not aware of what you have done for me. Now, I finally gained some strength to keep on going and to fight against trafficker. I couldn’t have done that without you. You saved me, I will never forget that”.

People, who are not familiar with the issue of human trafficking, are often prone to bias and stereotypes, which brings even more harm to trafficking victims. After victims leave the trafficking chain they are often discriminated by very same persons that are supposed to help them and protect them which expose them to secondary victimization and makes their recovery even harder. Because of that, it is important that they have someone who will be there for them and who will give them support when they need it the most, listening them with open mind, without judging them, but understanding the difficulty of the situation victims of human trafficking can be.