Reaching out during Breast Cancer Month 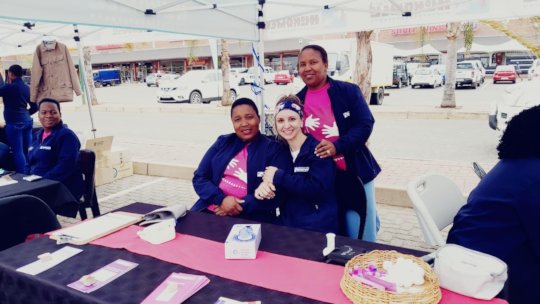 Every year the Hlokomela Women’s Clinic works on full steam during October to raise awareness about breast cancer and this year is no different!

On October 4th Hlokomela had their annual General Meeting and open day. During this meeting school groups and tour groups visited the clinic. Talks on breast cancer as well as demonstrating self-breast examination was given to our guests!

October 5th was the Hlokomela Migrant Recreation day! During this day, the female farmworkers were shown how to do a self-breast examination and taught the signs and symptoms of breast cancer. Each lady received a bookmark with pictures illustrating Self Breast Examination. The main purpose of the day is to encourage good relationships between South Africans and migrants and to share health information with migrants and where they can access health services.

The Hlokomela Women’s Clinic also has a stall at this event. Talks, training, and education was given to women on breast and cervical cancer. Free physical breast exams were conducted and educational material was handed out.

The month is not over yet and many more events are planned on which we will tell you all about in our next report!

During the month of August, a 57-year-old lady *Lebo, came into the Hlokomela Women’s Clinic, complaining of large painful masses under her arms and upper chest. Some of the masses were also in her breast tissue. Thankfully at the time, the ladies from the “Pink Drive” were in Tzaneen, Limpopo Province. They contacted me and offered free mammograms to a max of 5 patients for that one day that they spent in Tzaneen. I was able to send Lebo to Tzaneen for a mammogram. I received the report last week. Lebo’s results came back as a BIRADS 5, highly suspicious for Lymphoma. Lebo will be travelling to Johannesburg on 11 September 2019 to visit the Helen Joseph Hospital in Johannesburg, Gauteng Province for a consultation at the Breast Clinic. We wish her all the best.

On 21 August 2019 Hlokomela staff, staff from the South African Police Service (SAPS) and Rotary Club Hoedspruit set out to a high school in a local village. We visited a group of Grade 12 female students. The girls learned about breast cancer, cervical cancer, self-breast examination, and safe sex. Topics like transactional sex were discussed in-depth and were followed by a fruitful Q&A session. Members from SAPS also gave a talk about women’s rights. Each girl received a goodie bag of body soap and sanitary products donated by SAPS and Hlokomela Women’s Clinic. We enjoyed this combined effort with Rotary and SAPS in reaching out during Women’s Month.

During the month of August and September, Hlokomela Tours ran an initiative to allow high school learners from another local high school to participate in tours of Hlokomela’s various projects and facilities.

During their stop at the Hlokomela Women’s Clinic, I did talks on breast -, cervical - and menstrual health. I also spoke about safe and responsible sex, transactional sex, exploitation, abuse and “my body, my rights”. The learners received the talks well and we had many interesting questions in the Q&A after the talk.

Our last outreach for the year will be in early November before the schools start with final exams.

We are so proud to say that the Bravolution has become a booming success! We have received in excess of 100kg of bras since the start of the project in early 2018! The gratitude and joy that we see from our patients when they receive something that could be viewed as mundane by some, is just so satisfying and an absolute pleasure. It has been wonderful to see how women from all around the world stand together and support this project. We often find that women who enter the Hlokomela Women’s Clinic are in such a poor economic state that they often don’t even own a bra! Imagine the delight when they receive some!

Help a girl out

What a positive reaction we have had! It only goes to show how willing the people of our community are to help! Thanks to the men and women of Hoedspruit we have received a large number of sanitary products during August. This allowed us to fill up our goody bags for outreach as well as give every patient in need a pack of pads. We would like to continue this drive and we are very excited and focusing hard on the re-usable/washable sanitary pad project. 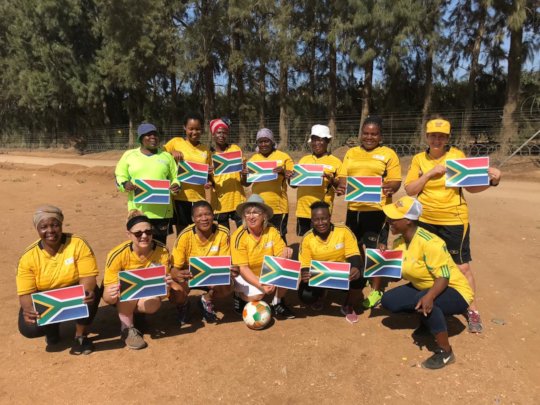 It is getting real

Our Team of three ladies have come far over the last few months and we are happy to report that they are well on their way to becoming full-time Sanitary Pad making Professionals.

Their quality of work is exceptional and they are extremely motivated. We are very proud of the work they are producing. There again has been some serious challenges as Clarah Mazadza and Irene Dzvene, both had family issue that forced them to travel back to Zimbabwe. Luckily both situations seem to have been resolved and we hope that we can go a few months now without hiccups and interruptions.

We’ve again met with the Dignity Dreams organisation to set up a partnership, and the have agreed to come to Limpopo on the 19th of September to give our team some more training. The Dignity Dream team will also be giving training to our nurses and outreach team on how to do awareness on menstruation and other women’s health issues.

The Sewing team will also be presenting their own Washable Sanitary Pad design to the Dignity Dreams. They been making prototype like crazy in a effort to get a version of the pad that offers optimal comfort, fit and absorbability.

We’ve also been able to generate some more funds for the project from the general public in Limpopo to help sustain the project. We are grateful for their support as the have in able us to employ our three seamstresses full time till December.

We would also like to thank our GlobalGiving friends and donors for your amazing support over the last 6 months!  You make all the difference to our work here at the Hlokomela.

Easing trauma for victims of fire 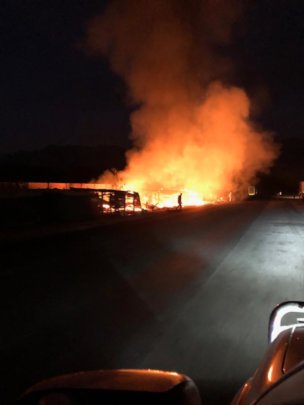 No loss of life, but victims were traumatized.

We take great pride in sharing our progress on the Trauma Releasing Exercise training with you, our GlobalGiving family! Without you, we would not be able to bring the benefits of this debriefing strategy to the rural communities of Limpopo Province, South Africa.

On July 11, 2019, a number of small roadside fruit vendors’ shacks close to the Hlokomela offices burnt down in an accident. It happened early morning when it was very cold and dark. Many people were living in the shacks and they lost all their belongings. Fortunately, there was no loss of life but all the survivors were shocked and traumatised. Emotions were running high and the victims directed their anger towards the person who accidentally started the fire with a candle. Three people were seriously shocked and traumatised attended a TRE session at Hlokomela Clinic and they all felt much calmer afterwards. Follow up sessions will be done by the trained facilitators.

This is an example of how TRE can be used in any stressful or traumatic situation and how important it is to train more and more people in this skill to help themselves and in the very challenging communities in which they live.

Over the past 3 months, the growth and change in the 14 participants training have been marked. They have made great progress and have grown in confidence. They work in pairs and are more outspoken about sharing their feelings and process of TRE with the group. They remain enthusiastic and all have experienced changes within themselves, which continues to motivate them under the skilled guidance of their trainer, Dr Erika Coertzen. One of the participants who miscarried twins last year felt deep grief and anger from the beginning of the training in March. At the July training session, she shared that she at last “felt free and without anger” thanks to the effect TRE has had on her. The training will be completed at the end of September.

With regards to the Hlokomela caregivers who trained last year, they continue to benefit from TRE on their own. Within their communities, they have reached 18 people including men, children and women. One very promising facilitator is was chosen to continue with TRE Module 2. More than 70 staff from Hlokomela, including Community Care Givers, continue to receive the support that TRE provides as part of debriefing for their work.