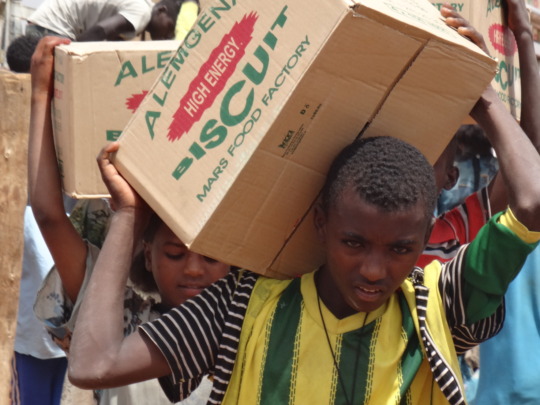 Students helping to carrying the biscuits

Ashenafi stood slightly apart from the others, looking out with sober, sad eyes. His head shaved no doubt because of lice or fungus feeding on deprivation. His shirt  and shorts barely held together covered a small brown thin body. In his hand his precious school books, ragged now with constant use, reading and re-reading making every effort to learn and improve his future. Gradually after the second and third visit he appeared less tense, and even once he gave a half smile. "What grade are you in, son?" I asked him. "8th", he then shared with me that he really wanted to go on to 9th grade... I asked if he would consider going to univeristy. A dreamy look came into his eyes... but was quickly chased away with "No, I don't think my father will permit that, I am the first born." So his hope is tenth grade complete and then help his subsistence  farmer father, but he will have more learning than his father and maybe later on he could continue.

You dear donor have made Ashenafi's dream a little more possible, he did not have to drop out of school; despite great poverty, he has had just enough food to see him through until the rains come and the corn grows... He is taking his 8th grade examination as I write and then go on to 9th grade.

We started feeding the school children in February, every month taking high energy biscuits and peanut butter to one school and eventually to four schools, the first one Fyel Wuha had received other food support so we were able to concentrate on four far more vulnerable schools selected by local Education Offices and with your generous donations we were able to provide high energy biscuits and peanut butter five days per week.The elementary schools are: Cher (1121 students), Bahr Giza (367 students), My Gemera (706 students) and Cherchere (461 students).

Abraham's Oasis supplied 1989 cartons with 150 individual four biscuit packet, one per child; 1656 large tubs of peanut butter given out to 13,607 students over five months.

The schools are up to 225 kilometres away from Abraham's Oasis main office, mainly on recently asphalted roads and only occasionally driving over dirt roads to access the schools. In some schools we made a drop off by the road side as there were no roads, from thence the children carried the boxes to the school over rough mountainous terrain.

Thank you for making this possible! 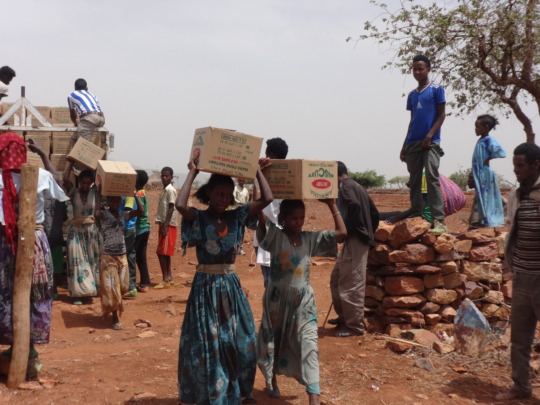 Even the girls helped 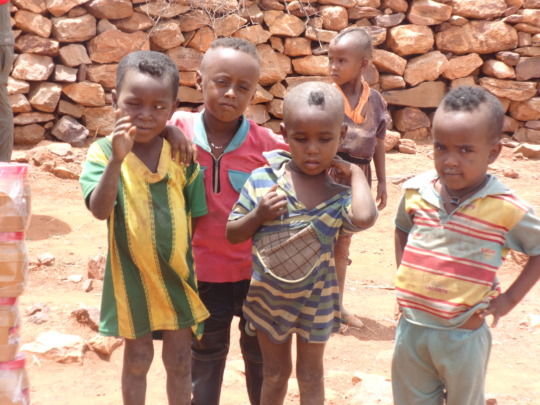 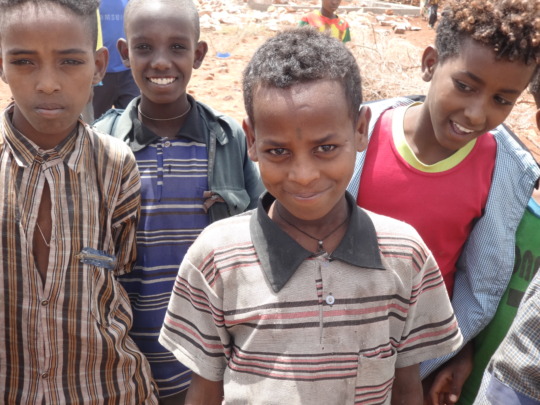 Looking so much better 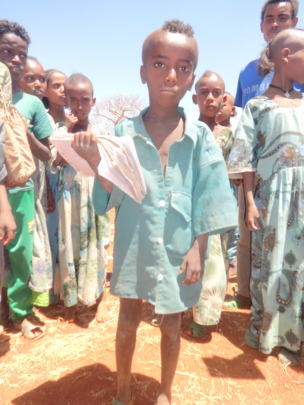 This was taken at the first visit... 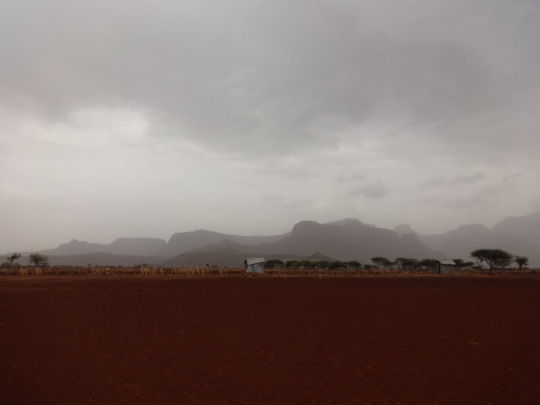 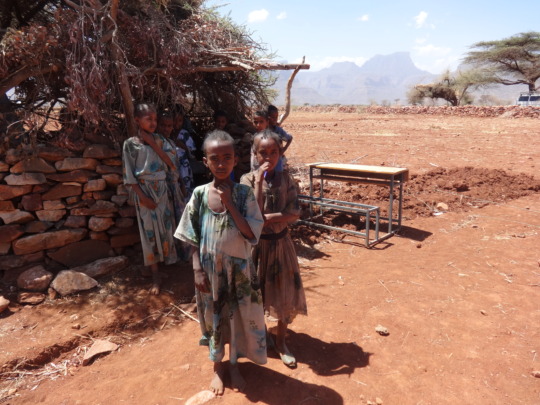 Wee lassies in front of their classroom

The roads were dry and dusty, gradually less green was seen and after 150 kilometres no green was seen, the trees were leafless and brown, I started counting the Baobad Trees. These are used as animal fodder, but the children told me they eat the moist pith inside the dry outer bark, "it is filling, you see..."

The children are so brave, trudging the long roads to their far away school with little or nothing in their tummies, I could see their thin bony bodies through flesh under they lose and ragged clothes.

They told me that yes, they were hungry, they have only a handful of porridge every day and the high energy biscuit given by Abraham's Oasis and that Tuesday and Thursdays are highlights because they also have a spoonful of peanut butter on the biscuits, "that is good!"

The government is providing families in this famine area with grain flour and oil from which porridge is made. The chairman of the PTA told me they receive 15 kilogrammes of grain to last one month for a family of five to ten with four litres of oil. By the end of the month there is little to nothing left.

"Are the high energy biscuits useful?" I asked him.

"Oh yes, the children though tired and hungry attend school because they have food there and the teachers are pleased because the children don't fall asleep from hunger." He replied

Abraham's Oasis has added two more elementary schools; Cher and Bahr-Geza and compared to Fyel Wuha they are thinner, some have mouth sores, some squinting in the sun indicating nutritional needs (Vit A)... The health centres have been notified.

God bless you all for helping! Keep it coming through GlobalGiving. 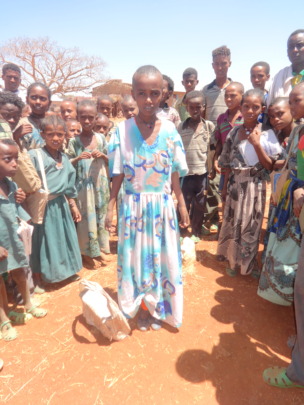 She had hidden her thin body under a large scarf. 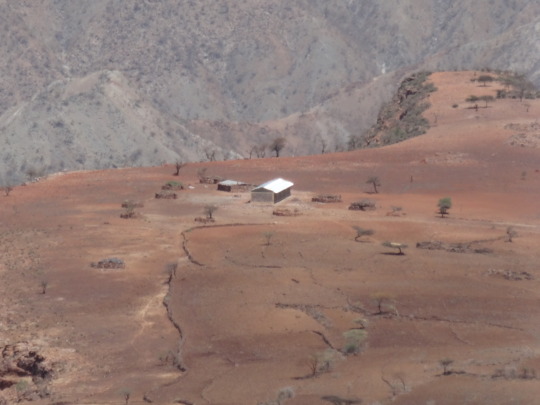 One of the schools in a dry and dusty land... 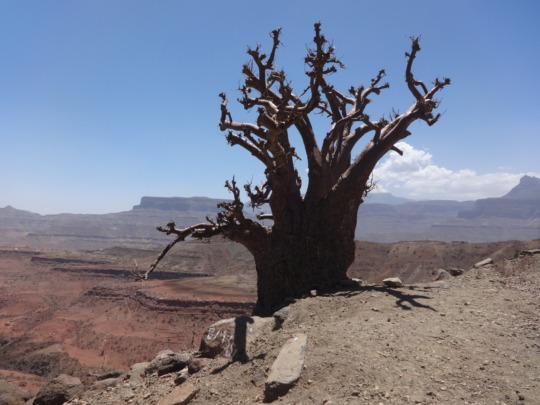 Children are eating the bark of the Baobab tree...
‹ 1 2 3 4 5 6 7 8
WARNING: Javascript is currently disabled or is not available in your browser. GlobalGiving makes extensive use of Javascript and will not function properly with Javascript disabled. Please enable Javascript and refresh this page.