Standing firm at the HTDC Orphanage in Haiti 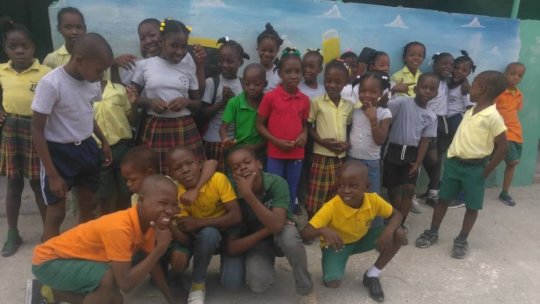 The kids are smiling because of you

Thanks so much for your continued support for the children at the HTDC Orphanage in Haiti.

In our last update we asked you to help provide some Christmas cheer at the orphanage, which was facing ongoing political unrest and violence outside its gates.

Many of you responded and as a result of your generosity the kids got the Christmas they deserved. Orphanage Director Carlo had this to say:

“Thanks to the donors we bought toys for all the kids. All our kids get two toys and they loved having a Christmas party. Christelle was very happy she got some toys that she wanted to have. Nolson got balls and cars that he can drive with remote control. He loves it and he was very happy. Thank you!”.

We echo Carlo’s thanks. The children had a great Christmas because of you!

Sadly the unrest in Haiti has continued into the new year however. February should have been a joyous time as the country celebrated Carnival. Unfortunately gun shots on the streets meant that Port-au-Prince’s celebrations were cut short.

As always Carlo was keen to keep things inside the orphanage as normal as possible:

“The political situation in Haiti is the same, but we are doing our best for the kids to feel more comfortable. So, we had our own carnival party for the kids with music and painting faces”.

Even after working with Carlo for ten years we still continue to be amazed by his resilience and determination in the face of adversity. The orphanage and children are fortunate to benefit from his leadership, especially as they’re now facing yet another threat.

While the Haitian government hasn’t reported any suspected or known cases of Coronavirus preparations are intensifying as more cases start to emerge in the region, including in the neighbouring Dominican Republic (DR).

Many people in Haiti lack basic knowledge about what the virus is, how it spreads and how to help prevent it, so training and education is vital, including within the orphanage itself. Carlo explained as follows:

“I am hiring two people to train the staff for a couple weeks about hygiene specifically for the Coronavirus. It is close to us now with a couple cases in the DR next door.

I am trying to set up a water station to make sure the kids wash their hands as often as possible to prevent it. I’m also getting them more vitamins and good food to help them keep their immune system strong.

We also take stronger steps to make sure when people come to the orphanage they make sure they wash their hands before access. The teacher also start telling the kids about the virus to help them understand the situation and keep teaching them how to wash their hands as often as possible.

I would like to know if it’s possible for the donors to help out with some funds as an emergency fund, to be ready in case the Coronavirus comes badly to Haiti. We are currently doing our best to keep the place cleaner and have the kids wash their hands, but we will need to buy more cleaning products and keep providing good food for the kids to keep their immune system on top.”

Like in our last report, we know you’ve already given so much, but we’re hope you can continue supporting the HTDC orphanage as they brace for yet another impact. If you ever have any questions about the orphanage and how we use your donations, please don’t hesitate to email Andy@IDVolunteers.org. I would be delighted to hear from you. 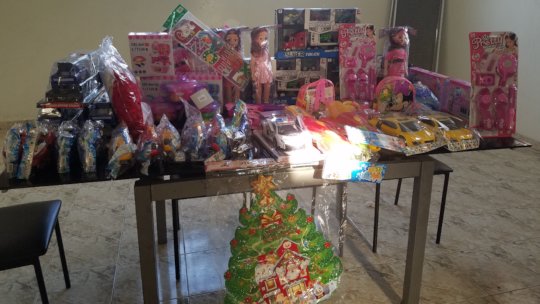 Some of the Christmas gifts you provided 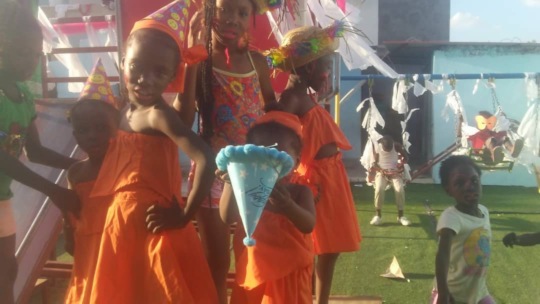 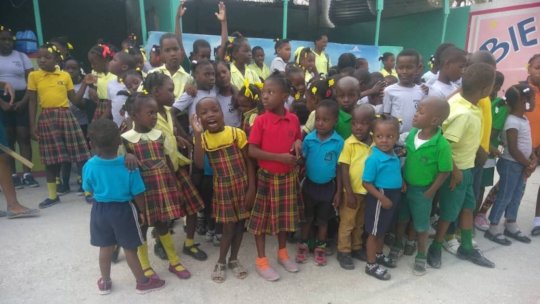 Empowering the next generation thanks to you 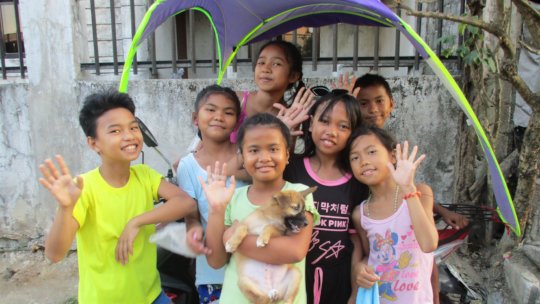 John (left) and friends want to thank you

Thanks to your incredible support the Banaba Livelihood and Evacuation Centre has been full of the energy and laughter of young people over the last few months.

Our work in Banaba, just outside of Manila, is all undertaken in partnership with an amazing peoples’ organisation called Buklod Tao. It’s six hundred-plus members are all local residents who, in 1996, started to join forces to fight for a stronger community that could better resist the many disasters that strike every year.

One of the greatest things about Buklod Tao is that the group is multi-generational. The adults know that protecting their community is a long-term effort and that empowering young people is vital to their work.

So, Buklod Tao has a youth wing called Buklod Ng Kabataan (or BK for short), which means “The Youth Bonding Together”, that has been working with Buklod Tao since 2007.

The community of Banaba knows that reducing the risk of disasters is closely linked to protecting the environment, and so a key part of BK’s mission has always been to protect mother earth.

Over the years your donations have helped support their work, which has included environmental advocacy and peer education projects. So, when Buklod Tao approached us late last year about engaging and empowering the next generation of future leaders we were keen to help.

So, over the last few months your generosity has helped BK to run regular Saturday activities for up to 65 young people aged 5-14. These activities have all been organised to educate the young people about the importance of protecting the environment and give them an appreciation for interacting with it.

Examples have included the manufacture of organic compost, using this to create “urban container gardens” and simply enjoying nature through hikes and supervised tree climbing. Healthy food and snacks has also been provided to ensure that young people from lower income households haven’t gone home hungry.

The activities have been a great success and we ask some of the young people taking part to share their thoughts. John, pictured above in the yellow t-shirt had this to say:

“At BK we learn many things like gardening, recycling and how to make compost. We are always encouraged to wash our hands always, especially before meals. There is always food for breakfast and lunch. We are fetched and brought back home by the multicab of Buklod Tao, and we never go home without learning something”.

BK members are also encouraged to share what they’ve learned through performance and Loren, pictured immediately below, had this to say:

“I learned composting while with BK and I even receive additional food for my good health. We, as a group of BK also went to the office of the EcoWaste Coalition to sing and perform songs about Mother Nature. Thank you!”

We echo Loren’s thanks for empowering the next generation, and we hope you’ll keep supporting these efforts moving forward. We’ll keep you posted as our work in Banaba continues, and if you have any questions please don’t hesitate to email Andy@IDVolunteers.org. I’d be delighted to hear from you as always. 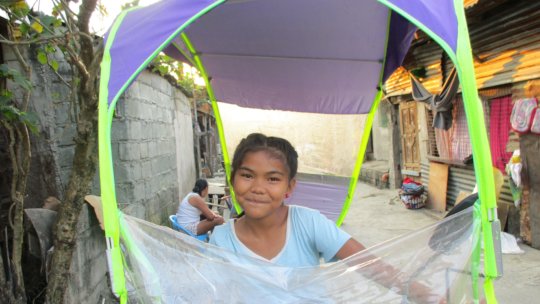 Your support has empowered Loren 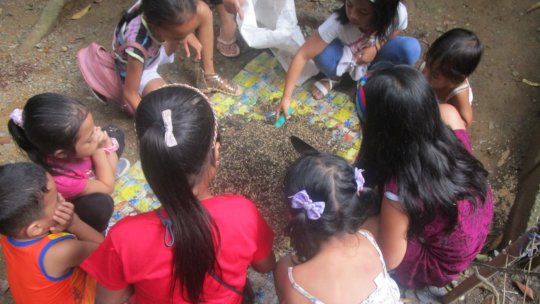 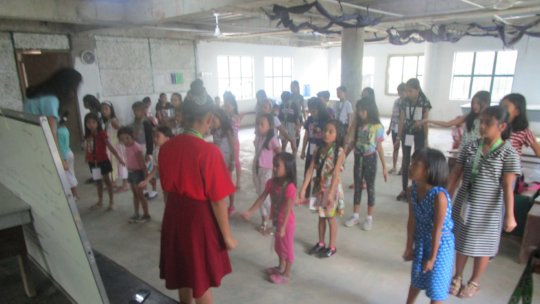 An anxious end to a year of storms 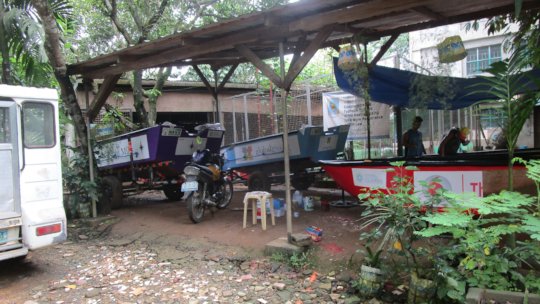 Some of the boats you've provided

It’s been an anxious few days for those with connections to the Philippines.

On December 24th as the country prepared to mark Christmas typhoon Phanfone (known locally as Ursula) made landfall in the province of Eastern Samar. Phanfone hit with the strength of a category 1 hurricane, bringing sustained wind speeds of almost 100mph and gusts of over 120mph.

Over 58,000 people were evacuated as the typhoon approached but 28 are still sadly known to have been killed during what should have been a joyful period.

Phanfone hit close to areas affected by 2013’s typhoon Haiyian, which killed over 6,000 people and affected more than 14 million in total. Having spent years supporting thousands of affected families in and around the city of Tacloban our thoughts immediately turned to our friends there.

Happily Tacloban escaped the worst of the damage this time round, and our former Project Manager Siggy reported that all was well with him and his family.

However, Phanfone was the 21st typhoon to hit the Philippines in 2019 and it provided yet another reminder of how vital your support to help build rescue boats really is.

In fact, it was only a few weeks before Phanfone that typhoon Kammuri (known locally as Tisoy) struck the island on which the capital sits, Luzon.

Tisoy brought winds approaching 100mph and Manila airport was shut down as a precaution as the typhoon rolled in. In the end Tisoy passed south of Manila but Buklod Tao had still been well prepared thanks to you.

The boats you’ve provided via this project are all crewed by local volunteers who risk their own lives to rescue their neighbours in times of crisis. However, they’re only willing to do this if they know their own families are safe.

So, in advance of Tisoy making landfall Buklod Tao provided the crews’ families with essential emergency supplies they would need should the worst happen. The crews had then been able to confidently stand guard knowing their loved ones would be safe.

Between Phanfone and Kammuri, Manila had two near misses in December alone so, once again, thank you for helping to protect flood prone communities in 2019.

We’re continuing to fundraise here on GlobalGiving to provide our next rescue boat and meanwhile we’re making further improvements to the Banaba Livelihood & Evacuation Centre that shelters people rescued by the boats.

Thanks to the generosity of donors like you a new water tower has been constructed next to the building. This tower has elevated two large 1,300 litre tanks and two smaller 200 litre tanks to the height of the building’s top storey. The large tanks now gravity feed the Centre’s showers and toilets, while the two smaller tanks have boosted supply to a solar powered water purifier.

So, evacuees sheltering in the building during typhoons can now stay clean and healthy whatever 2020 brings.

Thank you so much for your ongoing support, and if you ever have any questions please don’t hesitate to email Andy@IDVolunteers.org. I’d be delighted to hear from you. 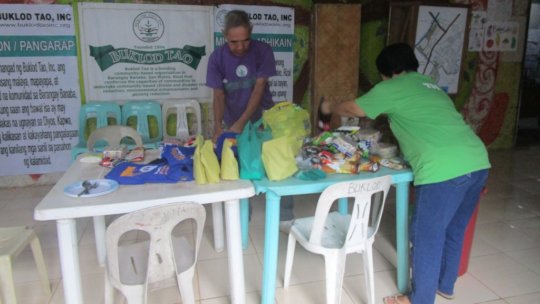 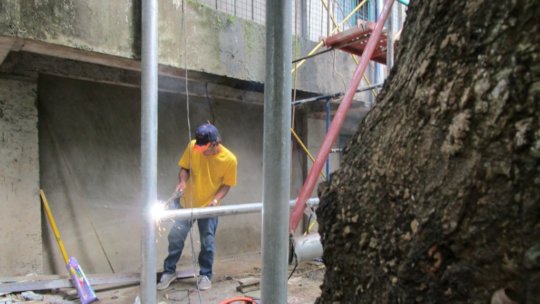 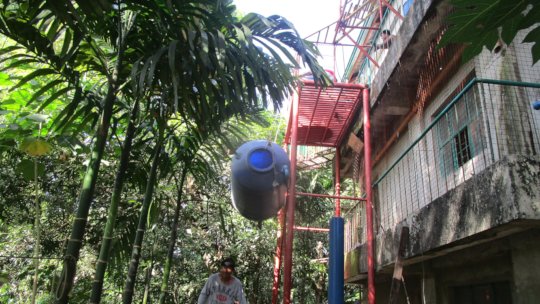 A water tank being hoisted into position
1 2 3 4 5 6 7 8 9 ... 262 ›
WARNING: Javascript is currently disabled or is not available in your browser. GlobalGiving makes extensive use of Javascript and will not function properly with Javascript disabled. Please enable Javascript and refresh this page.