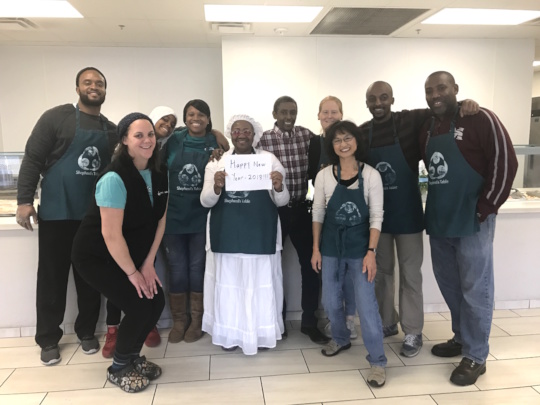 The task before us could be overwhelming--to serve a growing number of people who are hungry and homeless and in need in our community--but it is not, because of YOU! Your gift is an essential part of meeting these needs and fulfilling our misison. Thank YOU!

Your gift has allowed us to not only meet expected needs, but ones that went beyond even our best planning and expected growth. For every person sharing in one of over 117,000 meals served in 2017, there is the certain knowledge that we are not only alleviating their hunger, but lifting their spirits, sharing kindness, and offering words of hope and encouragement.

Best wishes for a wonderful 2018, and thank you for supporting our mission to meet needs and change lives together!

Giving from the heart 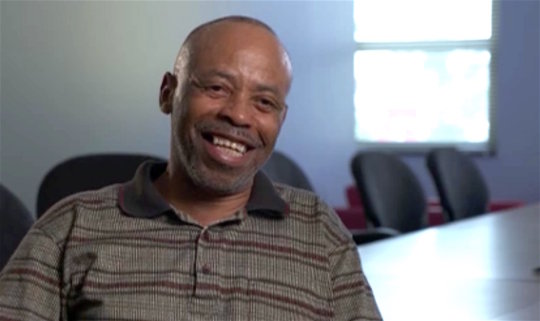 I had an ah-ha moment recently when a preacher shared a Haitian tale that touched my heart. Let me paraphrase it for you.

"One day a servant was called by his master. The master gave the servant a basket full of trash and told him to take it away. He did as he was told, and discarded the trash, but held on to the basket.

After he discarded the trash, the servant was walking through a field of flowers, and smiled as he admired its beauty. He went to find the empty basket, and began to pick the flowers and place them in the basket until it was full, brimming over with the beauty of all the fresh, radiant flowers.

He went to his master’s home, knocked on the door, and handed the basket to him. The master was perplexed, and asked why he was doing this. The servant said, “Everyone gives what is in his heart.”"

YOU are the folks who bring a basket filled with your love and the blessings of your life.

You turn hunger into fullness and satisfaction; confusion and lack of direction into knowledge; dreams into reality, and despair into hope. Your generosity makes those ah-ha moments possible for all the women and men that are served at Shepherd’s Table.

We recently spoke with Ernie, a former client who shared his ah-ha experience with us. He realized that he needed to do more than accessing services to get back on his own feet and change his future.

Ernie worked for many years in the printing business. It was a well-paying job. But for Ernie, the transformation to digital printing made his work obsolete. He lost his job and became homeless. He found Shepherd’s Table, which he credits with giving him a start in his journey, as it gave him someplace to go. He sought shelter in Rockville. He leaned into others for support and direction. One day led to the next, until he had his ah-ha moment. He realized that he needed to do more to get back on his own feet and change his life. He realized “what you put into it, you get back.”

He began to find odd jobs here and there. He worked for printers when they needed extra help. He tucked money away for the day when housing would be available. That day came. Ernie has been in housing for several years now, and he still works odd jobs. He still returns to Shepherd’s Table for a few meals every week, as he still needs help sometimes, and he also likes to reach out to other people to help them. He said, “I feel like I’m a part of the family, they have not turned their back on me.”

YOU make this help possible!

With Ernie, over 2,000 unique people have come through our door seeking the assistance that is needed in their lives.  They have come with the knowledge that they will be helped. The faithfulness of our donors just like YOU make this possible. We have doubled our food service in 2017, and in some months, even tripled the number of meals served over the same time in 2016.

Please know that we are filled with gratitude for all that you have done in the past. You have created a place for Ernie to be fed, nourished in his spirit, and supported in his journey. Ernie’s ah-ha moment led to a change in his life. YOU made this possible! Thank you! 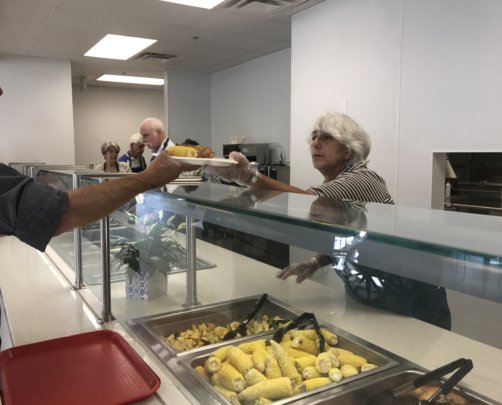 First, thank you for your kindness to Shepherd’s Table. Your gift means the world to us! Second, How are you? We hope that you are well and enjoying the days of summer! spring! We are so grateful for YOU!

When someone asks you, “How are you?”, what is your response?

I am always touched by folks who tell me the answer and then add, “Thank you for asking!” This response conveys to me that they have heard my question and they are honored that I am concerned and interested in their lives.  The question and statement illicit such a wonderful human interaction.

At Shepherd’s Table, we ask this question frequently, letting folks know that we are concerned about their lives, that we care about them.

Being recognized as a human person, and being cared about, are two vital needs in a person’s life. When we are known, when we are cared for, we can accomplish both big and small goals... All achievements are within our reach!

For all those experiencing homelessness, the greatest achievement is to obtain a home, and we are part of people’s journey to that achievement. We serve and partner with other providers in supporting folks on their journey, and YOU are a critical part of this journey. Because of your generosity, we work with, serve, lead, encourage, offer hope, and provide love for the folks we encounter every day! One day we believe everyone will have a home!

By the end of 2017, the County goal is to have all the individuals who are chronically homeless housed! We are proud to play our part in achieving this goal.

“How are you”? “Thank you for asking!” We ask this question today, leading to a better sense of self, so that tomorrow’s possibilities are endless!