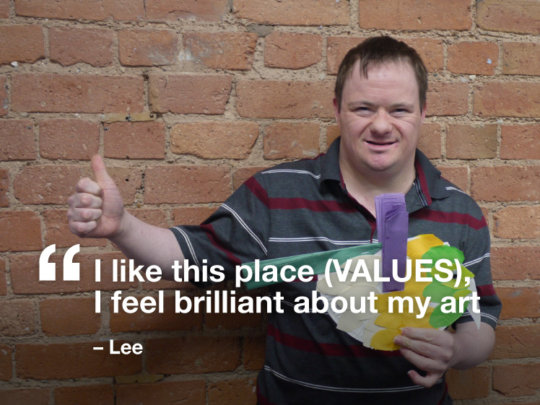 To celebrate Learning Disabilities Week we would like to highlight just some of the stars here at VALUES.

“I like this place (VALUES), I feel brilliant about my art” – Lee

Lee is a superb artist here at VALUES. He is a kind and sweet person. He faces multiple health needs which cause him pain and discomfort on a daily basis. Lee never moans or gripes, instead he continues his sessions with decorum and dignity.

Rabiya has been a real benefit to VALUES and VAL. She has been doing admin work as a volunteer for VAL, doing data entry, she told us how she really enjoys having her own desk space. Amongst her other sessions, she is a driving force in the Social Events Organisers team, helping to plan trips and special events like the multicultural buffet.

“I like VALUES, it’s nice. I have more friends and I feel more confident and independent” – Sanjay

Sanjay needed support to volunteer when he first started at VALUES. Having that support has given him the skills he needs to volunteer on his own. Being able to volunteer independently has meant that he has been able to volunteer 5 days a week, as there are no restrictions from funding, and it has increased his confidence and sense of purpose. His manager at the Food Bank told us his work was priceless to the project.

“I enjoy learning at VALUES. I like learning to read and tell the time” – Preety

Preety has been excelling in her sessions over the last couple of years. She has come on leaps and bounds with her Maths and English sessions. She has been determined to learn the time, practicing daily. She has also been a key part of the singing group, taking part in several performances such as busking outside Curve at Christmas and performing on stage at Choice Unlimited. She is also a big help when it comes to interviewing new staff and volunteers!

“I like VALUES, especially since doing to the volunteer work. It’s made me feel more important” – Kyle

Kyle has been volunteering for the finance team here at VAL with support from his 1:1 support worker. He has been hailed by the team as a big help. He is very confident and has given a presentation to the whole organisation on the volunteering he does. Throughout all his sessions at VALUES he is polite and courteous to everyone; a real gentleman!

Thank you for your part in making these wonderful people's lives better! 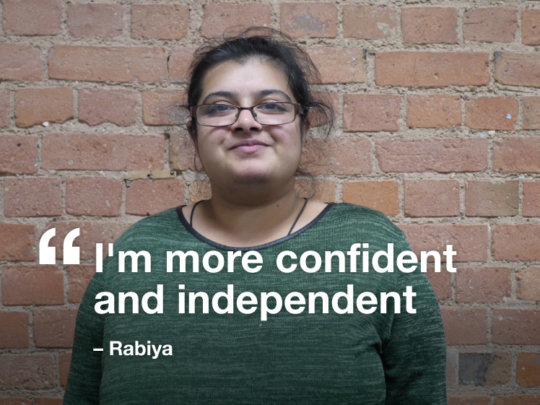 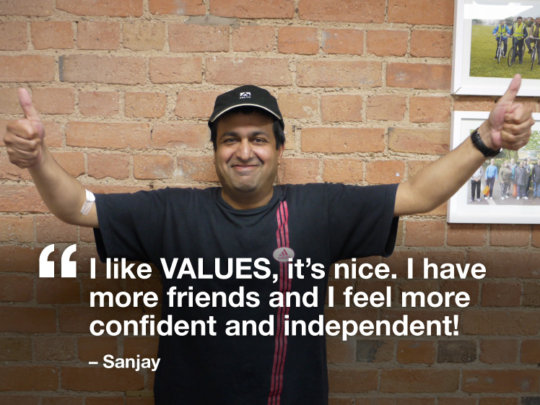 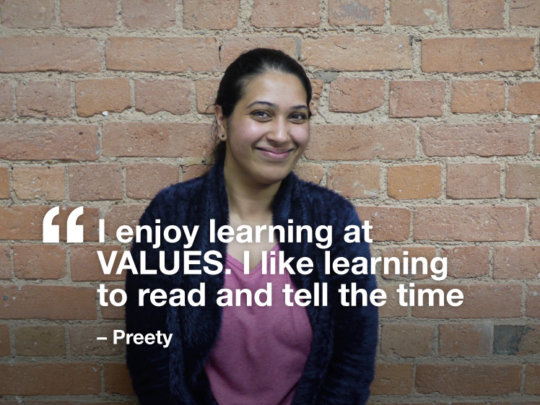 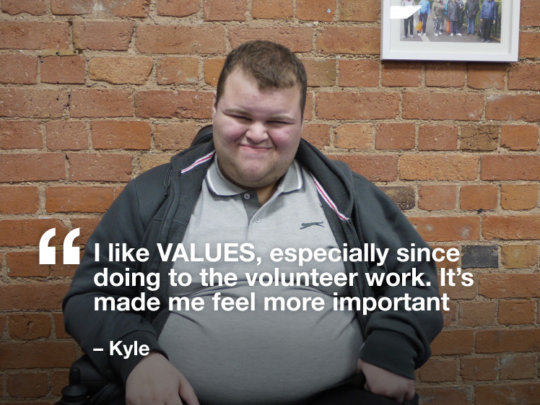 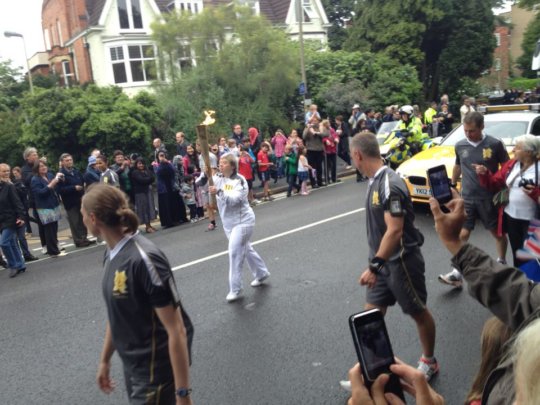 I want to introduce you to someone who puts most of us to shame when it comes to getting active. Maria (who has Downs Syndrome) is a Para-Olympic swimmer, an actor and a dancer. She even carried the Olympic torch!

This year we have been concentrating on getting active. We will use the money you have donated to take people with learning and physical disabilities on a supported activity holiday at the Calvert Trust. At the Calvert trust, those with arange of disabilities are given the chance to take part in activities such as abseiling, horseback riding and sailing.

Maria has been helping us fundraising. She helped us with our Zumba Fundraiser, which raised £135.

Maria also told us about when she took part in the Special Olympics in 2009:

“I met Arnold Schwarzenegger! It was at the Special Olympics. I was a swimmer. I did back stroke long distance. When l met Arnold, he gave me a hug, He said "Hello Maria", then he gave me a bouquet of flowers. He also gave me his autograph. He was a friendly person.”

Maria was then selected to carry the Olympic torch through Leicester in 2012.

“I carried the torch down London Road. I felt really proud”

It doesn’t stop there, Maria attends weekly drama and dance classes, such as the VALUES Tea Dance. She is also  a prize-winning horseback rider. Maria tells us:

“I have been to horse-riding lessons in Abbey Park.  I received a pink rosette in a Dressage competition, coming in first place!”

VALUES have been trying to get everyone active via our fundraising activities. As well as the Zumba Fundraiser, we have had a Five-a-side Football Tournament. We are having a Pool Tournament on 1st April at 11am at Riley’s, DeaconStreet, all welcome! The next thing we are going to organise is a Table Tennis Tournament.

Thank you for supporting wonderful people like Maria. Please tell your friends that they can do the same by going to www.tinyurl.com/scott-holiday, or attending one of our fundraisers. 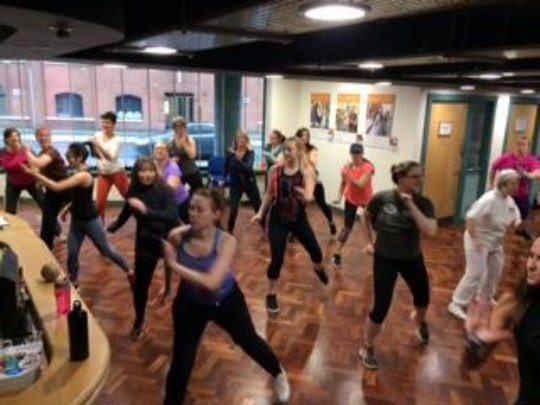 Maria at the VALUES Zumba Fundraiser 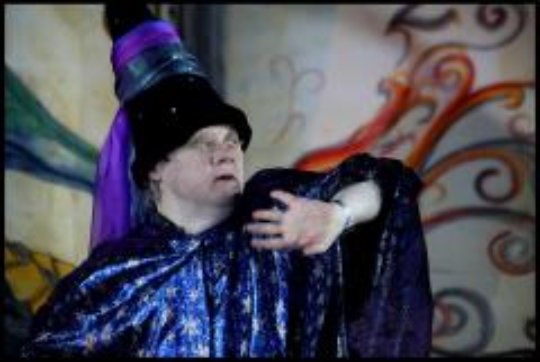 Maria performs at opening of the Special Olympics 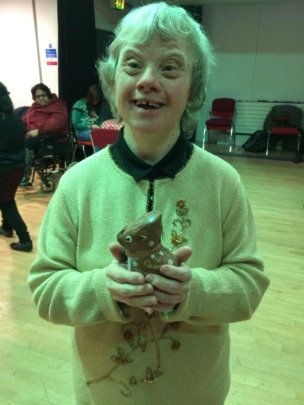 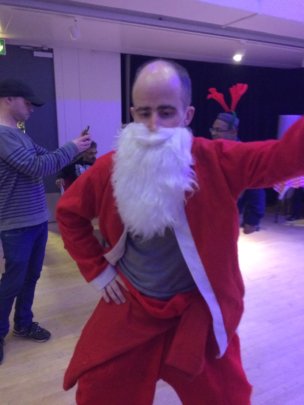 We just wanted to take some time to wish you a very merry Christmas and a happy new year from us all at VALUES!

This year had been jam packed with the first Global Giving funded holiday, 3 boat trips, drama performances, singing performances, our first open day, as well as all our day to day supported groups. We now have over 100 sessions and support 113 clients every week. In addition, around 140 people attend our ‘clubs’ per week.

Next year we hope to continue to go from strength to strength, to meet some new people who want to join the project, to add new sessions in the county and to expand the city’s unique repertoire to include Virtual sports, Aqua aerobics and Video blogging.

With the addition of our new Fundraising Volunteer, Danielle, late in 2016, we hope that 2017 will be full of great fundraisers. She has got off to a great start by organising busking for the singing group that raised over £70 in 40 minutes. We already have lots of ideas for 2017 including our 3 ‘Get Active’ events; Zumba, Capoeira and 5-a-side football. Check out our facebook for more information facebook.com/valuessupport

Thank you for all your support throughout the year.

If you can spare one more Christmas present this year then please go to tinyurl.com/scott-holiday and donate to someone with a learning disability.

From all at VALUES 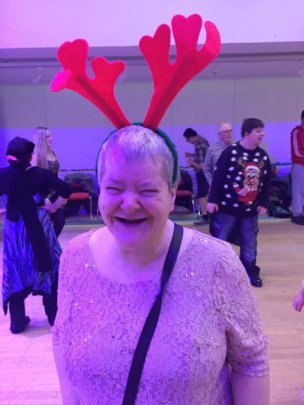 Joan wishes you merry Christmas
‹ 1 2 3 4 5 6 7 8 ›
WARNING: Javascript is currently disabled or is not available in your browser. GlobalGiving makes extensive use of Javascript and will not function properly with Javascript disabled. Please enable Javascript and refresh this page.