ASK for Choice in Armenia, Lebanon and USA 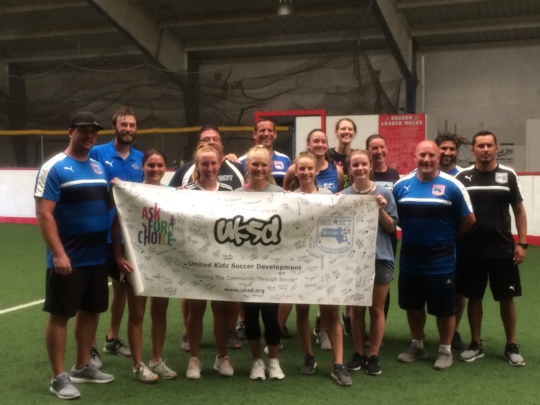 August 6th, 2018. Community Impact Coach, Jaffar al Shishani, writes about his experience working with Coaches Across Continents in Armenia and Lebanon with GOALS Armenia and ANERA.

Getting out of your comfort zone is not as easy as I thought it would be. After the last two weeks in Armenia and Lebanon with CAC this was the first thought that crossed my mind. Coaches Across Continents made it possible for me to explore new opportunities and deal with different cultures by applying a method based on creating a safe space where coaches and participants can be free to try, apply and exchange ideas. This safe space allows both sides to grow together and gain experience. Being used to working in Fencing, an individual competitive sport, the experience with CAC was a very important chance for me to concentrate on different goals, and especially to reconsider the social impact and the power that sport can have to change society. One focus of our work in particular was on women rights and the use of sport to empower women. Learning and applying CAC methodology also increased my own awareness of the constant violation of women rights in society, and gave me a different perspective on the subject. This kind of awareness will be very valuable and helpful in my development as a coach and I will try my best to use it to work for a change in my own country of Jordan. The desire to create a more equal society in my environment was a strong motivation to take part to this program in the first place, and CAC provided the safe space that I needed to develop ideas and strategies to work in this direction.

THE MOST VALUABLE TOOLSET

August 8, 2018. Meghan Fligg from CAC partner based out of Barnstable, MA, USA shares her reflections after our first ASK for Choice: Education Outside the Classroom training with United Kidz Soccer Development (UKSD) and South Shore Select Soccer Club.

Something we have learned through our journey here at UKSD is the importance of making partnerships. For the past few weeks, we have partnered with South Shore Select and Coaches Across Continents in order to enhance all of our abilities to reach kids through the game of soccer.

South Shore Select is an all girls soccer club located in Hingham, MA. Although they focus much of their work on building talented young athletes who are both technically and tactically educated, they are very much aware of the importance of helping their players also build their sense of character, commitment, leadership potential, and global awareness. It is because of this that Select welcomed, with open arms, Coaches Across Continents hands- on-training. Over the course of two weeks, Select Coaches, along with our very own UKSD coaches, actively participated in CAC educational sessions. However, don’t let the word education make you think of classrooms and books. The CAC staff had us moving, playing, thinking on our toes, and having deep and meaningful discussions.  Their mission is to use sport as a means of community growth and awareness. They knew that with a pitch full of coaches and even some players that the best way to do this was through the game itself.

Because CAC tailors their curriculums to the communities they are serving, they asked Select and ourselves what topics we wanted to focus on in our sessions . They wanted to know what we felt we needed in order to strengthen the kids we work with. We each came to the decision that some of the main focuses would be women’s empowerment, gender equity, leadership, healthy competition, and the definition of success. Throughout the training, these topics evolved in the most thoughtful and organic ways. Each coach was able to add their insight, experience, and how they could and would implement the lessons we were learning into our sessions with our kids.

The beauty of our discussions were that there really was no wrong answer. Each coach was encouraged to take what they could from the different activities and games and find ways to adapt them depending on the age, diversity, needs, etc. of the particular group we would be working with. Every one of us walked away, day after day, with valuable skills and lessons we could implement immediately.

It was in discussion after the trainings that we collectively recognized something; this type of player education could, quite possibly, be the most valuable toolset we could ever give the kids we work with.

Although some will go on to play at the collegiate level or pursue careers having something to do with soccer or sport, many will pursue other endeavors. We need to give skills which can transfer from their training on the field to whatever it is that they choose to do off of it.

We’re so excited for this partnership we’ve built with South Shore Select and Coaches Across Continents. It’s not everyday that an established soccer club will make time for this type of work. Even though winning may be important, they recognize that building youth with exceptional character is far more important. We can’t wait to see what the future holds for each of these organizations and our connections with them.

ASK for Choice in Chile 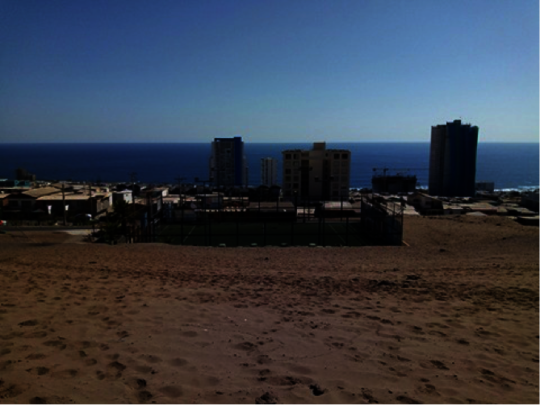 ASK for Choice team members Abigail Gibbons, and Lina Restrepo, reflect on their time working with CAC ASK for Choice partner Futbol Mas in Chile, as part of a team of 3 CAC women. ASK for Choice curriculum and methodology impact 6,500 youth across the country through Fútbol Más programs.

Before my departure to Chile and Peru as a Global Citizen, I had no idea what to expect. I have a passion for sport and using it for social impact—which is the reason I was initially captivated by Coaches Across Continents, conversational Spanish (more or less) and was waiting to see where the following weeks would take me.

The first training was an eye opening and learning experience for me. The opportunity to finally work on an all female team, especially in the space of athletics, was (and is) an incredibly empowering feeling. I took the initial days to learn and absorb the process and planning it takes to host a training. (If you think hosting a training is easy, think again.) It takes a lot of research, intuition and understanding to properly run each session and it was certainly more intense than I imagined it to be. After hours of preparation, I was excited to see how all of the work off-field would play out on field.

The first city we landed in was Iquique—a beautiful town with a beach that resembles Rio de Janeiro or the California coast on one side and blissful mountain deserts on the other. In Iquique and all throughout Chile, we would be working alongside CAC partner Fútbol Màs, a global organization that uses sport in communities to recover public places and create safe spaces for children to train and grow.

For me personally, this first training was amazing, challenging and overwhelming all at the same time. After being so adjusted to my life in the States, the reality that I was now an outsider—who couldn’t properly communicate or understand the local language—quickly led me to begin to think differently, become more aware of those around me, have greater empathy and change my previous perspectives of what life is like for a foreigner living in a new culture, city, country and community.

One of my greatest takeaways from this first training was how grateful I was to be welcomed, as a stranger, into the lives and communities of the participants and Fútbol Màs. I began to develop a clearer understanding that we are all humans who want to help each other, learn from each other and better our communities by encouraging new ideas and evolution from tradition.

Chile, Four Cities: Iquique, Copiapó, Santiago y Concepción.
During this experience of two weeks, I can say that we (Nora, Abby and I) had the privilege of sharing with amazing people from different cities in Chile. At every move you could see the contrasts in the landscape, the dunes, the sea, the desert, the green, the mountains, the cold, the heat and this was reflected in the strength of the people with their ‘excess of passion’ for every moment.
During the two weeks we were able to transcend the highly competitive nature of sport (Winning/Losing), through games directed at themes of social impact: inclusion, equity, respect for others, interculturality, human rights, sexual education and the environment. Sharing methodologies allows us to open opportunities to amplify our comprehension. Thank you for making this possible, CAC, ASK for Choice, Fútbol Más and Inder Medellín. 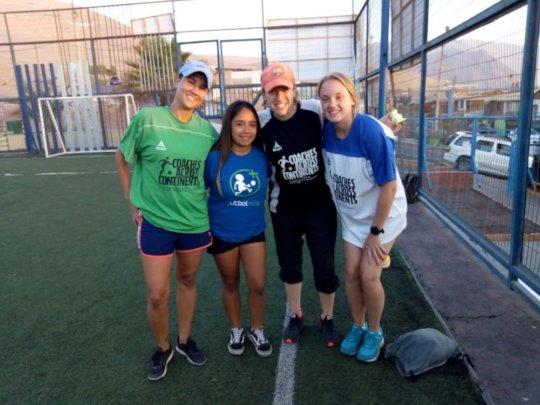 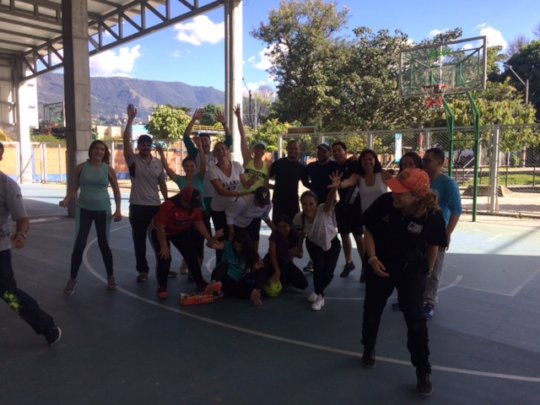 Nora Dooley writes about delivering ASK for Choice programs in Colombia with Community Partner Inder Alcaldía de Medellín, alongside Corporate Partners Nike, Postobón, GIZ, and Groupo Internacional de Paz, to close out a strong year working across the country for the rights of women and girls.

I treasure this moment of reflection. Four years after beginning my work with Coaches Across Continents, five years after graduating from Columbia University, I have spent more time in one country than any other: Colombia.

Working with CAC as a facilitator necessitates humility and a unique acceptance of the unknown. With our intention to challenge international NGO culture that designs development programs based on foreign knowledge of best practices (which can also be called white supremacy/ neo-colonialism), we must enter each community assuming and imposing nothing. Our job is to provide some structure through fun, play-based activities that stimulate group discussion, self-directed learning and collective problem-solving, and to support our partners as they create legacies for the social changes they want to see.

As little as I claim to know about this world, I can share some experiences – many of which I have enjoyed in Colombia with a faction of the large government organization, Inder Medellín.

Colombia is complicated. And even knowing more people and more facts about this country than most others, my U.S.-raised brain cannot imagine the depths of this complexity. I feel so fortunate, therefore, to have various and continuous opportunities to share time and space with Colombians invested in their community’s future.

Our work in Colombia throughout 2017 was bolstered by the social responsibility efforts of Nike and Postobón. This programming, centered on our ASK for Choice program which uses play to develop Attitudes, Skills and Knowledge to inform choices for women, men, and communities, caught some welcome attention. We spent a week north of Bogotá sharing with the GIZ (German government's sport for development department) sponsored program in collaboration with CAC partner, Grupo Internacional de Paz, and then returned to Medellín to learn more alongside humans I am lucky to call friends at INDER.

During this training with representatives from INDER's ‘Deporte, Convivencia y Paz’ and ‘Cultura D’ teams, we focused on gender, problem-solving, game adaptation and creation, challenging and transforming the cultures we want to change, and the vast possibilities available inside the lines of the sports field to address all that lives beyond it.

I feel so grateful for CAC’s strong partnership with INDER, for my Paisa family, and for the experience (and wisdom?) to know – at least in my life – that it most definitely is Colombia, not Columbia.

ASK for Choice returns in 2018 with more cross-sector initiatives, more actions to bring women's rights policies to life, more female coaches and educators stepping into their power, and more campaigns to raise money for this important work! 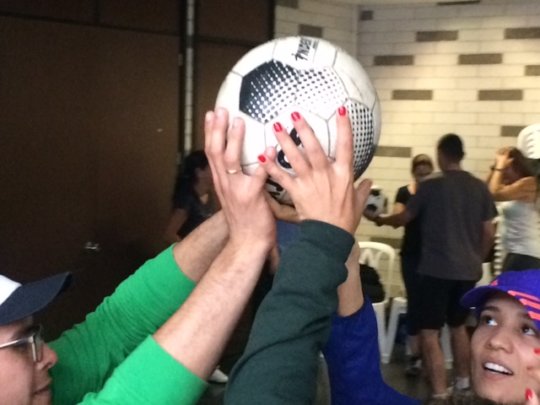