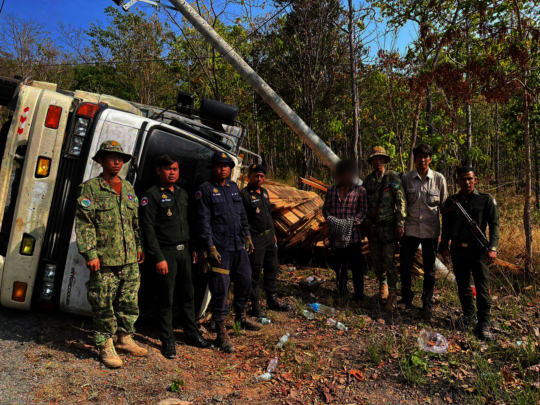 Photo evidence of timber with perpetrator.

As Earth Day 2021 approaches on 22nd April and millions come together in support of the environment to highlight the urgent climate action needed to restore our planet, our Wildlife Alliance Rangers are hard at work protecting the Cardamom Rainforest Landscape, Cambodia.

Our Rangers are on the front line in the fight against the climate emergency. Scientific studies have shown deforestation in the tropical belt can affect rainfall thousands of miles away and that Southeast Asia has the fastest rate of deforestation of all the world’s tropical basins so requires priority intervention. The > 1.3 million hectares under our protection is one of the last un-fragmented rainforests and great watersheds in southeast Asia and is globally significant for both climate regulation and carbon sequestration. Unfortunately, the landscape is increasingly imperiled by deforestation so during the last quarter our rangers have been busy disrupting and preventing the illegal logging trade via night ambushes and night check-points with some dramatic results!

In March, a combined night operation involving units from three patrol stations ambushed a 5-ton truck full of a rare timber species. The driver of the truck attempted a quick getaway while a car, carrying the owner of the timber and a timber trader, appeared suddenly and tried to prevent our rangers from stopping the truck. The large truck overturned, the driver was arrested, taken to court the next day and jailed. Our Rangers also confiscated and impounded 14.64 cubic meters of rare, valuable wood but, sadly, the trader and timber owner evaded capture.

However, the story didn’t end there. Happily, further investigation by our Rangers uncovered the identity of the trader who, it transpired, was involved in many other criminal undertakings and he is now being dealt with by the Royal Gendarmerie of Cambodia. This latest success story adds to the numerous successful timber busts carried out by our Rangers during the last quarter and they couldn’t do it without your support. Thank you so much.

Our Rangers are tackling the global climate crisis every day, 24/7 but they need help to continue to do so. If you feel inspired to support our program, please do so this week (19-23 April) when your generosity will go even further because GlobalGiving’s Climate Action Campaign will double your donation by providing 100% matching funds on all online donations up to $100. 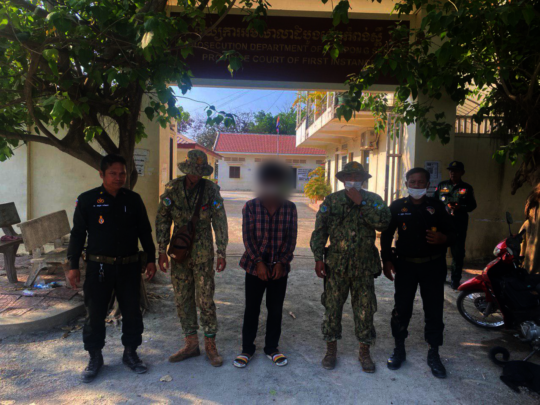 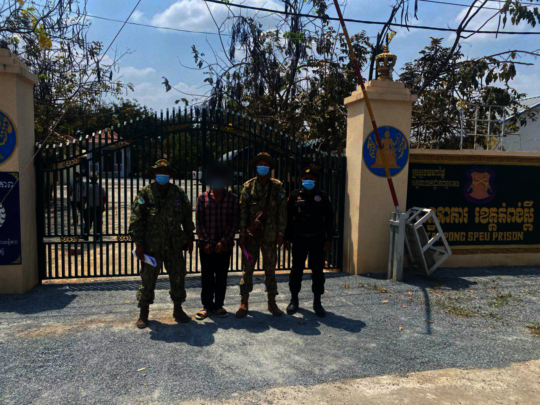 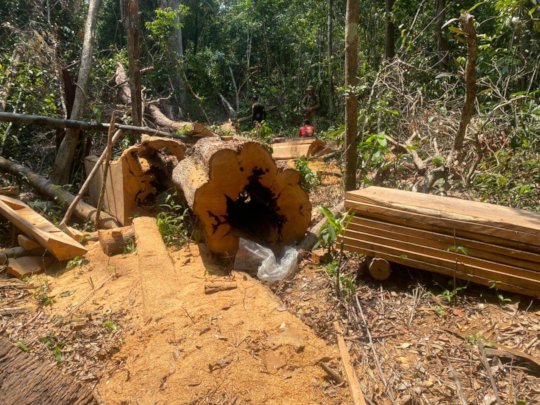 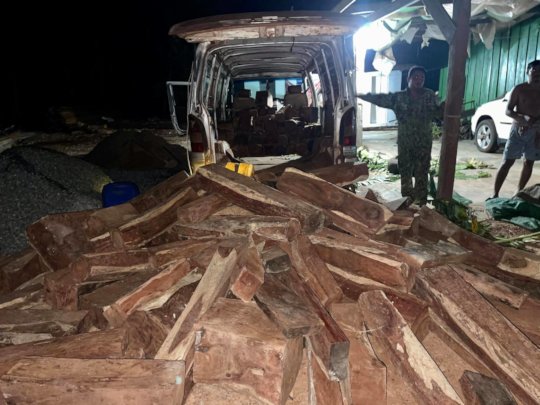 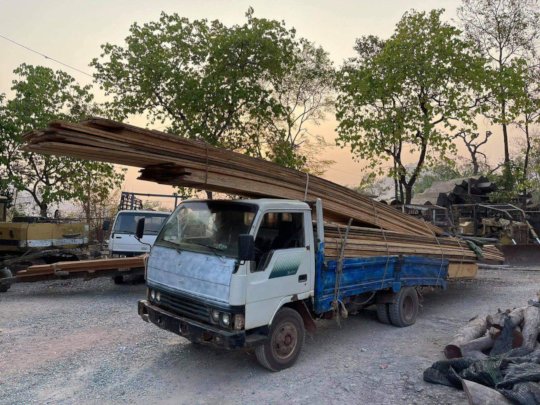 Transporting confiscated timber back to base. 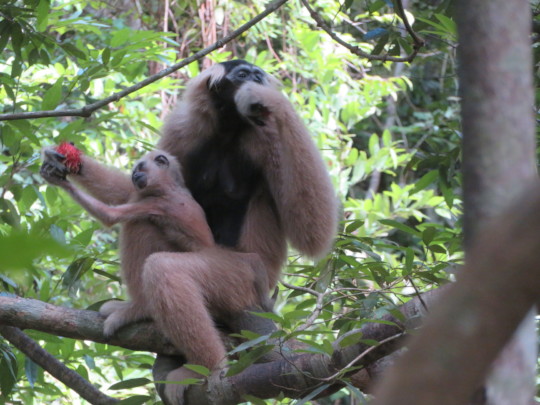 2020 was a landmark year for the growth and sustainability of the reintroduced gibbon population your donations help to foster in Angkor’s ancient forests. The first two pairs of pileated gibbons released by the project each produced a new wild-born infant in 2020! In March, Saranick and Baray, released in 2013, and their two older offspring were joined by new baby Kontes-long (Khmer for ‘water beetle’). We were delighted when, just five months later, Tevy and Bayon had an infant as well! Dun-kow is also this pairs’ third offspring since they were released in 2015. My role with the Wildlife Rescue and Care program is largely office-based, but finally last month I had the opportunity to see these two gibbon families in the forest on a visit to Angkor with my own family over a long holiday weekend. It was truly awesome to see them swinging through the trees, snatching tasty morsels from their feedbasket, and retreating to a branch to eat – and Kontes-long was stealing bites of fruit from mom, just as in the photo above! In addition to new wild-born infants, the Angkor gibbon population grew in 2020 through new releases and pairings.

Few organizations conduct soft-releases of rehabilitated wild animals after they have spent time in captivity, including long-term monitoring and management, so this work is experimental by nature and plans are adapted based on what is learned from closely observing the animals post-release. Supplemental food is provided to all gibbons at feedbaskets hung in the trees as a means of daily monitoring and to encourage them to remain in the more remote areas of Angkor selected for each pairs’ release site. A third gibbon pair was released in January 2018, but after less than two weeks it was apparent that they were not suited for life in the forest so they were recaptured and returned to Phnom Tamao Wildlife Rescue Centre. A replacement pair was identified and transported to Angkor in November 2018. After more than a year and a half of acclimatization, this replacement third pair, Pompoi and Borey, was released in July 2020 and both have since adapted to life in the forest and are doing well. In case you missed it in our report last year on Pompoi and Borey, you can watch this video of their release.

In mid-December 2020, a fourth pair of young gibbons, Bahkeng and Santamea, was transported to Angkor to a new release enclosure constructed at Dai Chhnang Gate. However, within weeks the female, Santamea, was displaying aggressive behavior that makes her unsuitable for release in Angkor. The first gibbon infant born in Angkor, Ping-peeung (which means Web spider) has now reached adulthood at 6 years old and over the past year she was being driven away by her parents, Saranick and Baray. This is natural as gibbons are territorial apes and in the wild each pair claims a range of about 30 hectares of forest and offspring move off their parents’ territory when they reach adulthood. By late December, Ping-peeung had moved away from her family, entered a small village in Angkor, and was sleeping under the eaves of a house roof. On Christmas Day, the team captured her and enclosed her with Bahkeng to replace Santamea as the female in the fourth pair and Santamea was returned to PTWRC. Ping-peeung and Bahkeng get along extremely well despite their age difference and they will be released after a period of bonding and acclimatization.

This situation presents a solution to a challenge anticipated from the very start of this project – as the gibbon population grows, how will the wild-born offspring of released pairs find mates? Angkor was selected in 2013 as the reintroduction site because it is extremely well-protected, it had no existing gibbon population that would drive away released pairs and the large old-growth forest is big enough to sustain an expanding population. However, these conditions also make it difficult for the first generation offspring to find mates. Initially, we planned to transfer single gibbons from Phnom Tamao and release them at Angkor as potential mates once the offspring of released pairs reached adulthood. But as time went by and the team observed the behavior of the first two pairs released, it seemed very likely that the parents would just chase away any potential suitors introduced nearby. Instead, we decided to release additional pairs and let nature take its course, trusting that offspring from different families would hear each other’s calls whooping though the forest, find each other and create new pairs. The circumstances with the fourth pair presented an alternative method – capturing wild-born Ping-peeung and moving her to an enclosure in a different part of the forest with a rehabilitated captive-born male from Phnom Tamao provides her with both a mate and her own territory in Angkor.

The Angkor gibbon population now stands at 6 released adult pairs and five wild-born offspring living in the forest, plus Ping-peeung and Bahkeng in their pre-release enclosure. Creating a reintroduced wildlife population that is self-sustaining is a long journey, made possible by donations from generous supporters like you. We look forward to continuing to learn from these amazing creatures and sharing the next chapter in the story of the Angkor gibbon families with you. 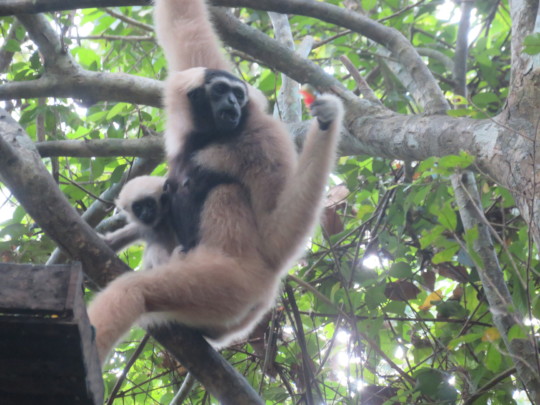 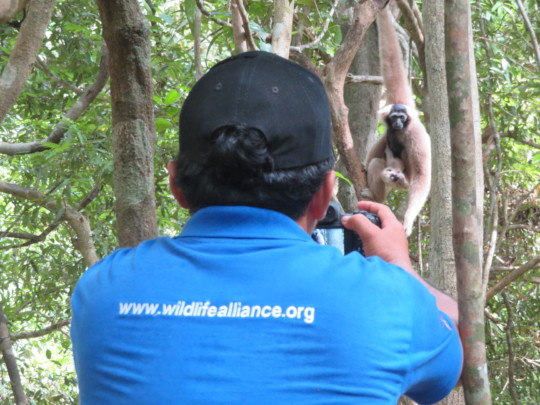 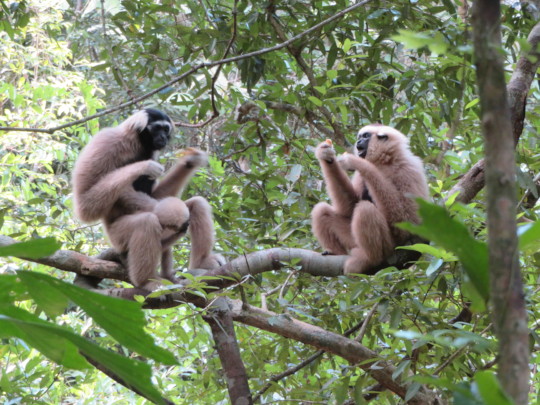 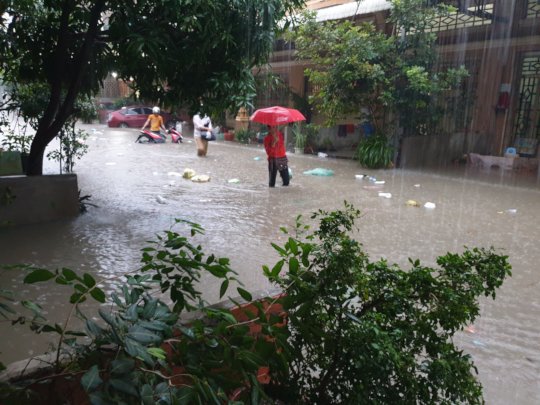 It is said that experience makes the best teacher. And in the case of feeling the very scary, very real impacts of climate change, the Kouprey Express has firsthand experience. In addition to raising awareness about protecting wildlife in Cambodia, our curriculum for training teachers and community educators includes lessons on climate change and adaptation – facts of life that affect all of our beneficiaries and in recent months have personally impacted each member of our team as well.

Weather patterns have noticeably changed in recent years, with unusual droughts affecting crops and immensely heavy rain storms destroying houses, infrastructure, and rendering areas inaccessible due to severe flooding. 2020 was a difficult year for the planet, and in Cambodia it was made more challenging by exceptionally heavy and unseasonal storms - that struck even in dry season in 2021 - that resulted in catastrophic flooding around much of the country. This flooding directly affected every member of our environmental education team. In fact, the Kouprey Express has the dubious honor of being the only team at Wildlife Alliance in which every member’s house has flooded at least once, with one team member’s home flooding three times in just ten days!

The rains caused considerable damage to and loss of property as well as lost worktime. Between August 2020 and February 2021, the Kouprey Express lost a total of 20 working days due to climate change-related flooding as the team had to not only clean up the aftermath but also evacuate their homes until the flooding subsided, fortify their houses to protect against the next storm, and in the cases of two staff, move to new accommodation. Such flooding is also extremely dangerous - the risk of electrocution is high during house floods in Cambodia because wiring is often not installed to code and the majority of houses in cities are not built on stilts as they are in the countryside. Another major climate change related threat is drowning, as roads, bridges, and embankments can suddenly wash away and swimming skills are few and far between here.

The weather now dictates the schedule of when the Kouprey Express mobilizes to deliver environmental education in rural areas, with the team staying close to the capitol city when inclement weather is on the horizon to help keep their families safe. This is a sad and unfortunate reality, but like most of the communities we serve our project must prioritize climate change and it makes our team well-situated to drive home the urgency to take action! Our lessons feature important facts and information concerning climate change in both the Cambodian and global context, and most importantly, offer useful adaptation methods based on experience that are designed to keep everyone safe. Instead of looking at this as a headache, we see it as an opportunity to help communities in emergency preparedness in order to weather the storms that are continually increasing in magnitude.

Your donations make it possible to not just raise awareness of endangered wildlife but also to share these climate change education and preparedness messages, which can save lives in emergencies, with more Cambodian communities. Thank you! 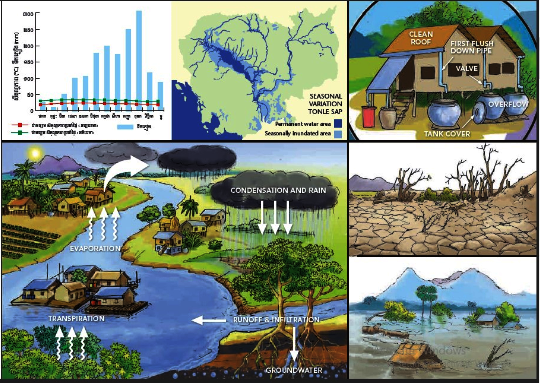 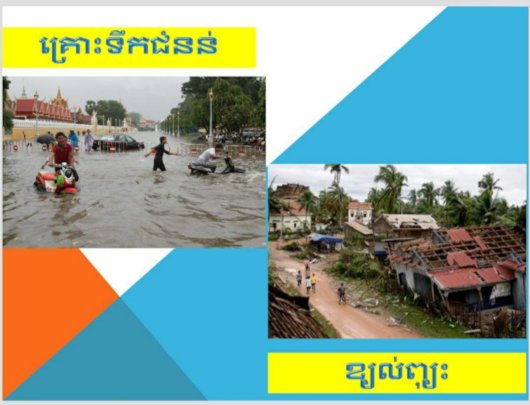 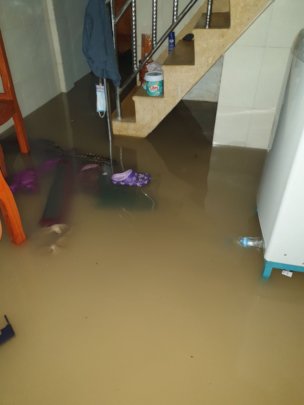 Flood waters from front door and under the floor
‹ 1 2 3 4 5 6 7 8 9 ... 108 ›
WARNING: Javascript is currently disabled or is not available in your browser. GlobalGiving makes extensive use of Javascript and will not function properly with Javascript disabled. Please enable Javascript and refresh this page.