Thank you for helping us release rescued wildlife! 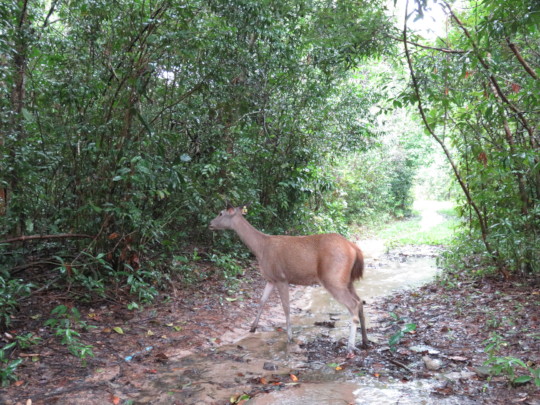 Sambar returns to the wild

We would like to extend a special thank you to all the donors that helped fund our campaign to purchase tracking equipment for releasing wildlife in Cambodia. Thanks to your generosity and kindness, we have been able to purchase collars for multiple species and have successfully released animals back into the wild. We raised over $2,600 which will help up safely release animal rescued from the wildlife trade in the coming weeks. We would like to share with you some recent successes that are a direct result of your donation.

In March we released a male and female binturong rescued from the illegal wildlife trade. The keepers tracked them every day as they readjusted to their lives in the wild. The male’s collar fell off after three months as scheduled. He moved far away from camp in what we assume was an effort to find a new lady. Visual checks from the keepers and the amount he was traveling each day confirmed he was in good health.

We released a trio of Sambar deer were released into the Cardamom Rainforest in July. Each of the three deer came to the Wildlife Release Station (WRS) from different backgrounds but were rehabilitated and released together. In the first few days after their release, our staff provided supplementary food, however, the sambar were much more interested in the wild leaves and grasses around the forest than the grass we provided. The trio stayed close to the camp for a few days but slowly ventured deeper into the jungle and to new grassland clearings. One of the females still remains close to the release station and often comes back to her pre-release enclosure in the evenings!

Two leopard cats were separately rescued from the illegal pet trade as kittens and were brought to Phnom Tamao Wildlife Rescue Center. Upon reaching sexual maturity, they were transported to our Wildlife Release Station where they have been prepared for release. They have now both been fitted with collars and should be released in a few weeks when the rain lightens up a bit and they can be more easily tracked.

We have also fitted a Critically Endangered pangolin with a tracking device. The pangolin was rescued from a restaurant in Phnom Penh where it was destined to be eaten. After the pangolin was rescued, she was immediately transported to WRS for care. She will also be released when the weather is more conducive to tracking. Pangolins are the most trafficked mammals in the world and there are so few Sunda pangolins left in the wild that every pangolin we can keep in the wild is vital to the species. 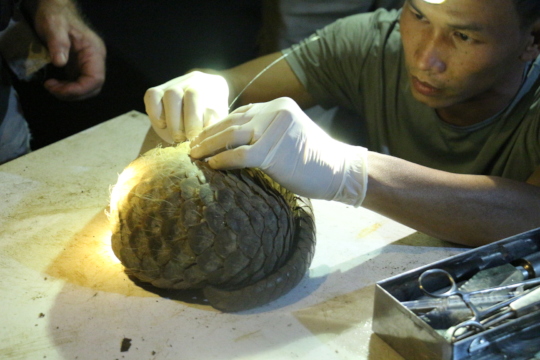 Pangolin fitted with a radio transmitter 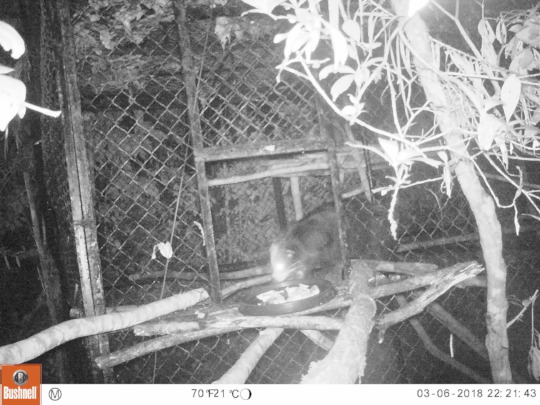 Binturong ventures out of his cage! 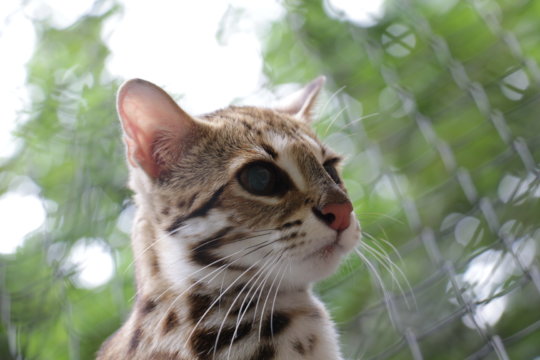 All is well in the Angkor forest 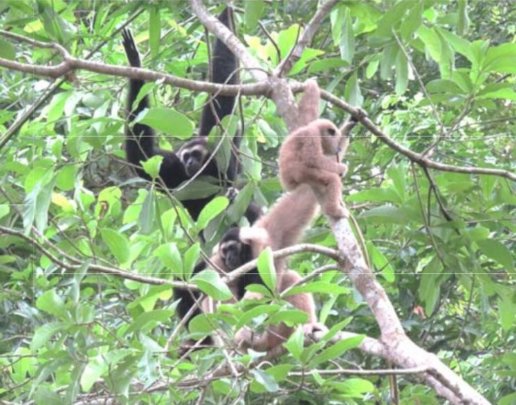 There have been no untoward events taking place with the two pairs of pileated gibbons we released into the Angkor forest. Baray and Saranick, the first pair and their two youngsters are doing well. Bayon and Tevy also seem content, although we got a scare in May when their young daughter, Aping, suddenly became withdrawn and frightened, refusing to approach her parents. The next day she was fine again and we feel she may have been stung by an insect. Judging by the condition of her mother it looks like Aping may soon be joined by a sibling. The muntjac we are preparing for release look extremely healthy! The original pair has now doubled to four and unless I am mistaken it looks like this will increase again very soon.

The recapture of the captive-born langurs we released in 2014 was unfortunate, but the fact there was a problem, which we immediately resolved indicates how seriously we take this project and we hope will reflect well with the authorities we work within Angkor. Developers asked us to remove a troupe of around 30 silvered langurs from an island off the coast. Our request to release these in Angkor was agreed to by Apsara, indicating that this may be the case and the governing authorities appreciate our integrity and professionalism. 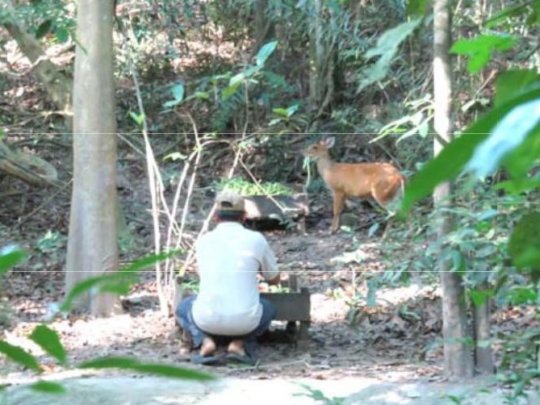 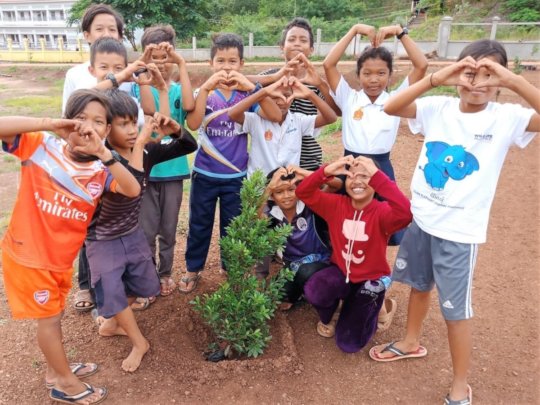 In order to strengthen its cross-border efforts, the Kouprey Express (KE) mobile environmental education team conducted wildlife protection lessons with 624 (298 female) students in two primary schools along the Cambodia-Thai border. After classroom lessons and activities in the morning, we planted 32 trees in the compound of the Phnom Proek school in the pouring rain. The school director along with teachers and students helped us dig holes and provided tools and other materials we needed to plant those trees. The KE team also conducted teacher training on climate change adaptation, waste and sanitation management, and biodiversity conservation. This will allow the conservation education in the border communities to continue after Kouprey Express's visit.

Later in the month, the KE team provided wildlife and habitat protection lessons to 559 (310 female) students from 4 core schools in Kampong Speu province. This area has been a hotspot for wildlife trafficking and has been a focus of our Wildlife Rapid Rescue Team's investigations and recent busts. The WRRT, managed and supported by Wildlife Alliance, is a unit dedicated solely to cracking down on wildlife crime and the illegal wildlife trade. The KE’s outreach initiative in the areas the WRRT have been frequenting is complementing the ongoing efforts by the WRRT and augmenting the efforts to mitigate wildlife trafficking. In addition to classroom lessons, the KE team brought 670 students and teachers from schools in the area to visit Phnom Tamao Wildlife Rescue Center to meet animals that were victims of the wildlife trade and give them a memorable experience to complement their conservation lessons from the previous week.

Thank you for helping us spread conservation awareness in Southeast Asia. Your support is helping bolster long-term behavioral changes and empowering the next generation of conservationists. 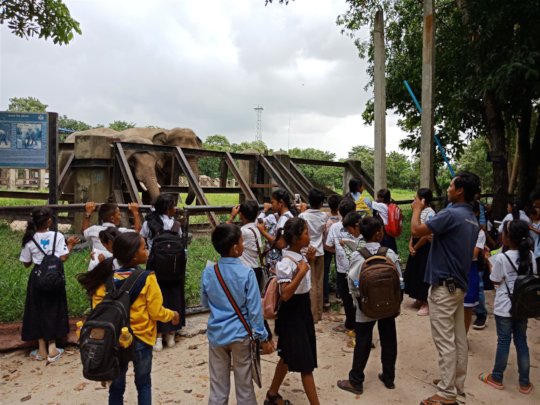 ‹ 1 ... 9 10 11 12 13 14 15 16 ... 101 ›
WARNING: Javascript is currently disabled or is not available in your browser. GlobalGiving makes extensive use of Javascript and will not function properly with Javascript disabled. Please enable Javascript and refresh this page.