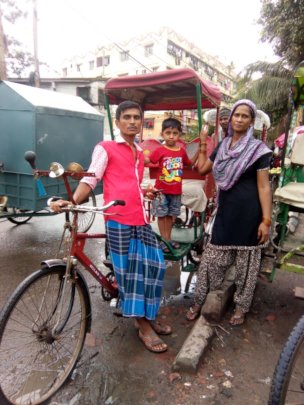 Rehana is 26 years old.  She is married with a son and a daughter.  They live near Topsia canal side settlements in central Kolkata. Her daughter studies in class IV and son studies in class I.  Up until June 2018 Rehana earned  a meagre Rs 50 (57 pence) per day by chappal-cutting (trimming the rubber straps of sandals). Her husband is a rickshaw puller and earned Rs 180 (£2.00)  per day after paying Rs 70 rent to the owner for the rickshaw. This income was not enough for running the household expenses and sometimes the family went to sleep without food.

In June 2018 Tiljala SHED had received a loan of Rs 20,000 (£230) for supporting her business through Tiljala SHED’s Alternative Livelihood Program. Rehana purchased a rickshaw. This meant that they no longer had to pay rent  for the rickshaw. Her husband earned a good amount for 6 months and, no longer trapped by poverty, he was able to find good work in Odisha.  So Rehana now rents out the rickshaw and receives Rs.70 per day in rent.

Having repaid the initial loan in full, she took another loan for Rs.30,000 in June 2019 and opened a new warehouse for waste recycling work. She is also repaying the second loan in time. Her husband continues to work hard in Odisha to help repay the loans.

Whatever she is earning from the warehouse is reinvested in the business to expand. The condition of the house and their living standard has increased. They have a lot of expansion plans and she plans to take another loan in the coming months after the repayment of the loan.

Life has changed in just 12 months and with their hard work this family is making progress and is on the way to end poverty in a few years.

Rehana wants to live an independent life and does not want to depend on her husband’s income. She has dreams to make her son a police officer and daughter a nurse to serve the society. She is a leader in the community and an entrepreneur.

How are these loans organised?
Applicants for loans under the Livelihood programme all come from the very poorest section of society. They live in the desperately poor areas of central Kolkata which Tiljala SHED has supported for many years. All the beneficiaries are women, although many, like Rehana, may take the loan to enhance or support their husband’s business. Each beneficiary is screened to ensure they are truly in need and living below the poverty line. Applicants form small groups of 4 or 5 women, CIGs (Credit Interest Groups) which then work together to support and encourage one another and also to take responsibility collectively forone another’s repayments.  A condition of taking a loan under this scheme is that the children must remain in education and that the beneficiary must have a bank account and develop a habit of saving.  This way they are protecting their future.

Why is this scheme so successful?

What are the main positive outcomes/impact?

This scheme is 3 years old.  It started with a fundraising Quiz Night in December 2015. That evening raised the seed funding which led to the first 80 beneficiaries receiving loans in June 2016.  Since then a total of £96,500* has been disbursed to 472 beneficiaries. Of those, 142 are former rag pickers (the lowest of the low – women who fed their children by collecting other people’s waste and selling it on to dealers). The rest were classed as ultra-poor (not rag pickers, but from extremely vulnerable families and living in the same illegal makeshift shelters). None of the beneficiaries are in any useful way literate – and yet 74% have increased their family income through becoming entrepreneurs.

We are desperate for another £10,000. With this we can expand the project and bring in the long waiting list of CIGs (more women like Rehana) who are desperate to change their family’s fortunes with a small loan. With a further £10,000 circulating through the system, enough interest will be generated to cover the entire cost of the project and to make it fully self-sustaining.

A single donation from you will be accessed again and again as these desperate communities lift themselves out of poverty, educate their children and walk into a brighter future…

*£18,000 raised through Global Giving (about £3000 at that first quiz night) and the rest is funds returned in repayments and funds raised locally in Kolkata.

The Future: Trimming Sandals or Education? 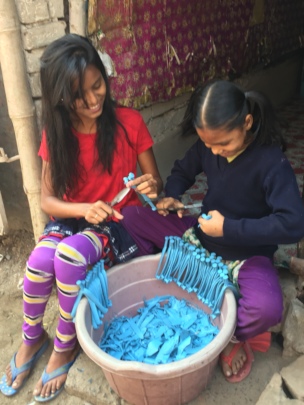 When you visit the Topsia canalside squatter community in Kolkata, one of the things you’ll notice is how many men, women and children are engaged in “chappal trimming”. The manufacturer delivers truckloads of untrimmed rubber sandals to the community every morning. Workers are paid 50 rupees (about 58 pence or 72 cents) for trimming twelve dozen pairs. This is exploitative piecework – but many families rely on it to be able to eat.

My colleague, Chanchal, who runs the education project writes….

“RUKSHANA lives with her large family at Mazdoorpara Topsia . Her father Safdar, who was a driver, cannot work after he met with an accident. Now he is involved in trimming slipper straps along with other members of the family. The income from this activity is very low hence there is a perpetual pressure on meeting the basic need of the family. His eldest son has married but does not contribute toward the family expenses. His other son who works in a factory contributes a nominal amount. His eldest daughter who was once married but has separated for her husband also lives with them with her daughter. She works as a maidservant. Her income just about supports her and her daughter.

She got admitted in school quite late because of the family’s weak financial position. She tries to help the family by trimming slipper straps.

Tiljala Shed is trying to help her to come up in life by giving her opportunity to learn computer operations and also providing free coaching. She likes to take active part in games so that she remains fit and healthy.

SUMAN and his brother SUMIT live at Mazdoorpara Topsia with their family members. Suman studies in class X. His father is Ram from a neighbouring state Bihar. He used to work in a factory and earned enough to maintain his family but he met with an accident and lost his hand while operating a machine. He was laid off and the family earnings plummeted. He along with other members of the family are now involved in trimming slipper straps which is a highly exploitative vocation.  He tried to ply a van rickshaw but found it very difficult and had to give it up. One thing about the parents which is positive is that they want to educate their children who are also very much interested in studying. The brothers are very sincere and help to manage the class when required. They are also good in sports.  We thinks they are very able and with our help they will do well

The boys have a dream to become successful in life and change the fortunes of the family."

The families in these two case studies are truly in need, as you’ll read.  But despite this they are determined that the children will stay in education.  This project provides the necessary support to ensure children from Kindergarten upwards are encouraged to stay in education. Every day we run after school classes in our Community Centres where the children come for remedial help with schoolwork. They have computer classes, singing lessons, homework support, sport, drama, nutritious snacks, occasional excursions and health care.  The parents are engaged too: they are almost all illiterate themselves but they understand the importance of education and are encouraged to see the big picture and not to marry their daughters off early or withdraw their sons from school to send them to work.

Parveen and Suman have done extremely well. They are both studying in class 10. Until this project began it was unheard of for children in this community to remain in school much beyond class 5 (aged about 10).  There are now dozens of young people who dare to dream of a better future than heavy labour or early marriage.

So if you ever visit the Topsia canalside squatter community, I hope you’ll notice how many young people are in school uniform, carrying books and school bags, perhaps heading off to well-paid work or to college. And that no family needs to trim chappals to feed hungry mouths.

Thank you for your continued support.  We desperately need more donors to help keep this project afloat, so please share this with friends and family. 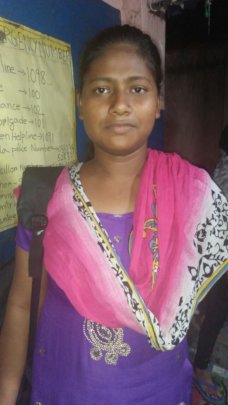 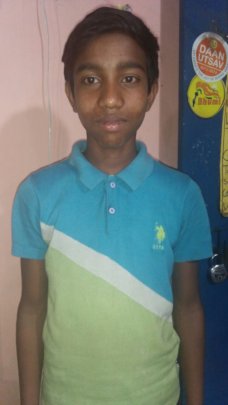 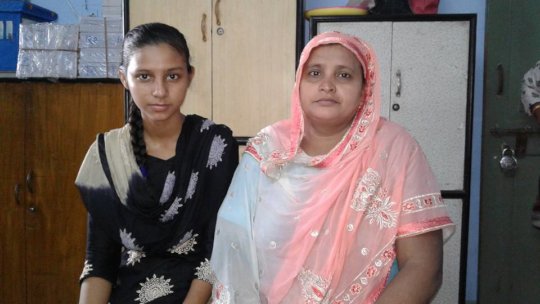 Ayesha and her mother

“Ayesha is 12 studying at Anjuman Girl’s High Secondary School. She lives with her family of 5 in a single room. Her father is a painter who paints posters. His monthly income is not stable because his work is temporary. Ayesha’s brother is a labourer in a small shoe making shop and his wages are very low. Total family income is £30 a month, not enough to run the whole family.  Ayesha may have to stop studying due to her poor family income.  She is a bright student; she aims to become an art designer. If she gets proper guidance and financial support then she has a bright future ahead.”

This is what my colleagues wrote about Ayesha in 2016 when we were first looking for a sponsor for her.  There are two things that strike me about this: first, that hand-painted posters, once a huge industry which produced the most wonderful advertising posters whether for Bollywood films, butter or cement, are definitely a thing of the past.  I wonder that Ayesha’s father finds any work at all. Ayesha’s mother is a delightful woman who is totally committed to ensuring Ayesha gets the education that she herself never had, but she is illiterate and works entirely within the home making sure her husband’s meagre earnings stretch to fill all the needy stomachs.  The other striking part, is that Ayesha might have had to stop school if she hadn’t been sponsored.  The reason for this is not that school isn’t free.  Ayesha’s school is a government school and there are no fees.  However, school uniform, books, bus fares etc all had to be found, and this was beyond means of the family.  The next thing would have been to marry her off so that someone else would feed and clothe her. All that bright ambition would have been wasted and Ayesha would have ended up just like her mother.

Happily, Ayesha did find a sponsor. Sheila has supported Ayesha over the last three years.  There were moments when I worried she might drop out.  In a very traditional community like this, a girl who takes a boyfriend, can be hustled into an early marriage – thus abruptly ending her education.  But she has stood firm and I’m thrilled to report that Ayesha has passed her class X exams (equivalent to GCSEs) and has enrolled into class XI. So she remains on track.  It isn’t easy from here though: class sizes at the Anjuman Girls High School are as big as 120 girls, so she will continue to need all the support we can offer under this sponsorship programme. Sheila’s contribution covers all books, extra tuition fees, transportation costs, uniform, shoes, school bag and any necessary nutrition or medical needs. She is a member of our Gyan Azhar Library, a safe space to work, borrow books, to use the computers and internet. She attends cultural activities – dance, craft and also lifestyle sessions on nutrition, menstrual health and online safety.

We are desperately looking for more sponsors like Sheila, who will commit £30 a month to supporting a girl like Ayesha.  The equivalent of one hour’s private tuition in UK provides a whole month of vital educational support.

‹ 1 ... 8 9 10 11 12 13 14 15 ... 27 ›
WARNING: Javascript is currently disabled or is not available in your browser. GlobalGiving makes extensive use of Javascript and will not function properly with Javascript disabled. Please enable Javascript and refresh this page.