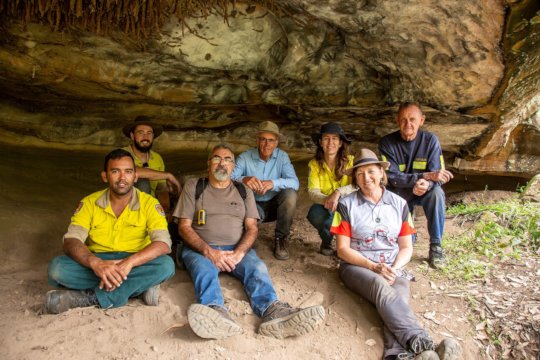 In December, FNPW received the final report from one of our Bushfire Recovery Grants: Aboriginal Site Recording Yengo NP and Surrounding Country. The project aimed to map 40 sites, however from May through to December the team surveyed more than 67 sites.

The area was severely impacted by the 2019-20 bushres and the grant has allowed many Aboriginal sites in the Yengo NP and surrounding country to be surveyed and photographed. The team surveyed 41 known cave sites (listed AHIMS) with signicant art – drawings, artefact stencils and hand stencils – photographed and GPS conrmed. In addition, there were 22 engraving sites visited and recorded with some photographed at night, with the team continuing to check on well known sites mainly in the Yengo NP. The survey list also includes many grinding groove sites, water ‘tanks’ and stone arrangements.

Highlights from the survey include unrecorded sites – two caves with signicant drawings and stencils, several stone arrangements (dicult to specify quantity), engravings (some partial that could be added to known engravings at the same site) and many new grinding groove sites. Some cave sites also contained artefacts such as knapping stone akes, ochre fragments, animal bones (most likely macropod) and mussel shells.

Below are some of the photos they have taken from the sites that were mapped after the fires.

The images from the caves (Yengo 1 and 2) show art work on walls and engravings of circles believed to be in excess of 4,000 years.
These caves were excavated by archeologist Jo McDonald in 1987 and are believed to be the oldest in NSW.

Most of the sites survived the res, although there was some damage to at least two caves due to the impact of eroding winds in the restorm and trees that burnt into the cave overhangs. On the sandstone platforms, the leaf litter and fallen trees will have an impact as vegetation regrows and possibly cover engraving sites. The team has removed leaf litter on a number of engraving sites to protect the site.

The team have worked with the national parks rangers and this very successful relationship will continue, especially in regard to updating AHIMS and the protection/management of cultural sites. The team are developing their skills and sharing their knowledge of photography, mapping and survey planning. A great outcome from the grant has been achieved.
This project was funded through FNPW's Emergency Bushfire Recovery Grants as part of FNPW's Healing our land initiative.
Top group photo shows Kiama, Ben, Liza, Jim Mitchell (team volunteer who works on survey, maps and planning), Allan Chawner (team volunteer who works with survey and photography), Carol Carter (team volunteer who works with survey, lighting and administration) and Warren Taggart, Wonnarua Elder and team leader. 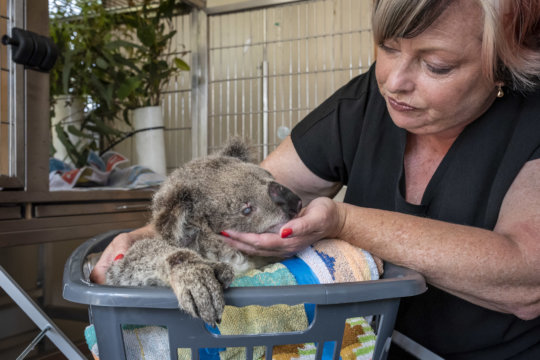 The Foundation for National Parks & Wildlife (FNPW) is committed to continuing its critical regeneration efforts post bushfires, which left over 12 million hectares burned and over a billion native animals affected.

Healing our land is FNPW's global emergency appeal to help recover the land affected by the 2019/20 bushfires. Its aim is to restore habitats for threatened species, regenerate national parks with tree plantings and landscape management and purchase land for the purpose of creating new national parks.

The initiative has allowed FNPW to respond immediately by distributing much-needed funds to wildilfe rehabilitation groups across Australia.

The impact of the Black Summer bushfires continues to affect many wildlife carers across Australia. Many are wondering how they will face another summer with so many fire-affected animals still in care, and so much infrastructure yet to be repaired. In August FNPW opened the National Wildlife Heroes Large Durable Asset Grant round, with $800,000 of funds available for the purchase or construction of wildlife treatment and rehabilitation facilities. This, and other initiatives to follow, will help to support wildlife and their carers on the long road to recovery.

Given the impact of Australia's devastating bushfires in 2019/20, the Bushfire Recovery Nurseries wll be the first step in significant replanting following the impact of the bushfire on tree species' in gravely affected areas.

FNPW is raising funds to plant the one million trees over the next five years in Bushfire Recovery Nurseries around Australia to propagate native plants for erosion prevention and restore animal habitats for species including the Glossy Black Cockatoo and Koala.

FNPW is working with governments and community partners to assess priority areas in NSW, ACT, Victoria and South Australia. Trees from the Bushfire Recovery Nurseries will be planted in national parks across Australia, as well as other public and private lands that have been affected by bushfires. 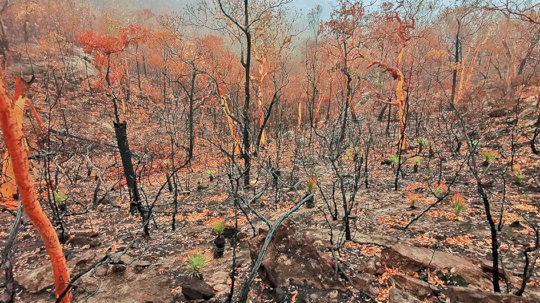 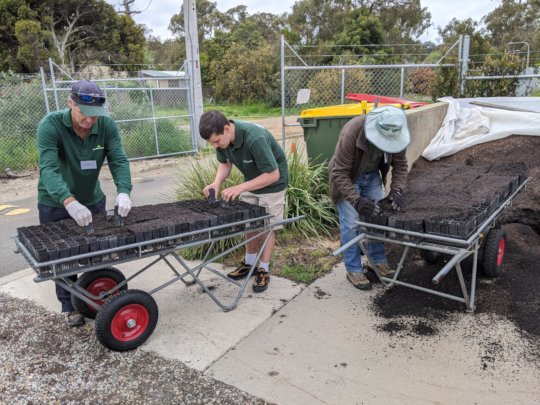 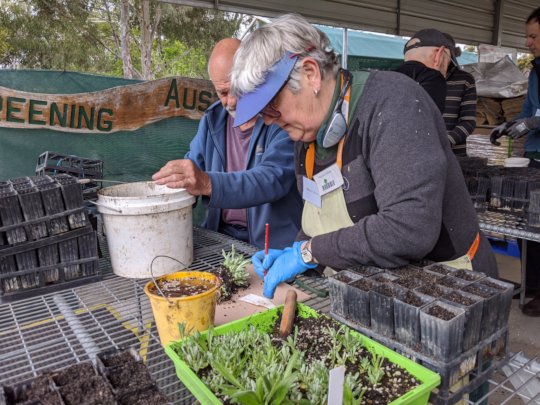 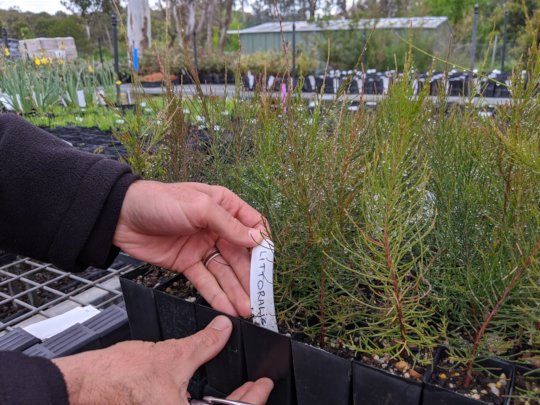 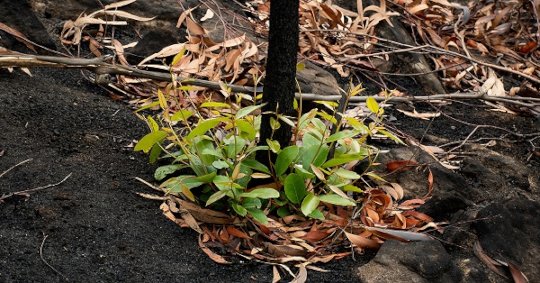 As part of the Foundation for National Parks and Wildlife’s Healing our Land initiative, our focus is to repair the damage inflicted on our country following the devastating bushfires.

With over 12 million hectares of national park and bushland affected and an estimated one billion native animals losing their lives, the initiative will focus on the regeneration and recovery of Australia’s flora and fauna.

As an urgent next step following the horrific bushfire season, we have awarded the first of our Emergency Bushfire Recovery Grants, with an initial focus on rehabilitating urgent, devastated areas in New South Wales and South Australia.

Please see below for further information.

Koori Country Firesticks Aboriginal Corporation/Birkenburn Cultural Burn Program & Workshops: Koori Country Firesticks Aboriginal Corporation (KCFSAC), in collaboration with private landholders Tom Gordon and Martina Shelley, will undertake a cultural burning program for Tom and Martina's rural property "Birkenburn" in the NSW Southern Tablelands. The project aims to regenerate and maintain biodiverse habitat on the property and protect it from wildfire, while encouraging and enabling surrounding landholders and community to do the same.

Aboriginal Site Recording Yengo NP and Surrounding Country: The bushfires affected extensive areas of the Yengo NP and hundreds of cave paintings and engravings sites may have been impacted by the fires. At the same time, unrecorded sites may be revealed as the bush is more open and overhangs and rock platforms are visible. Elder Warren Taggart and his team of volunteers will visit known sites and report back to National Parks (NP) with documentation for the Aboriginal Heritage Information Management System (AHIMS).

Batemans Bay Local Aboriginal Land Council: Cultural surveys will be undertaken on the land damaged by the bushfires, to assess for cultural sites, landmarks and places of significance. Flora and fauna surveys will help with the regeneration, repopulation and natural migration of species which play an important role in our country.

Investigating the impact of bushfires on Kangaroo Island echidnas: This citizen science project aims to investigate echidna distribution, diet and health following the bushfires, which have added additional pressure on the endangered species.

Nest boxes for wildlife after fires on Kangaroo Island: As a result of the Kangaroo Island bushfires, a community nest box project has been initiated to provide immediate shelter for insectivorous bats, pygmy-possums, and several bird and reptile species.

We will continue to provide updates on each of these projects as they progress.