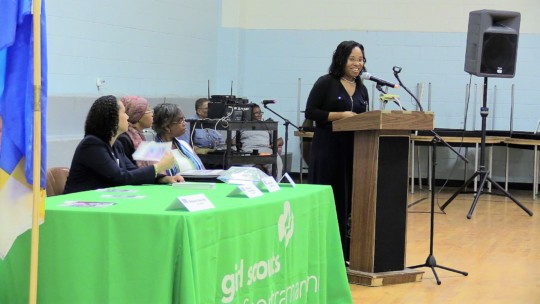 The relevance of the 25th anniversary of the Maryland Girl Scouts Beyond Bars Program lies in the message that it sends the daughters.  This 25 years of consistency says to each girl “We will be there for you,” We will not disappoint.”  These important messages give these girls the strength to walk through metal detectors and security gates just to see their mother.  It helps them endure the sound of metal doors locking shut behind them as they travel down each hallway.  It gives them hope that they can keep a relationship with their mom.

Approximately 2.3 million children, or roughly one child out of every 30, currently has a parent in state or federal prison.  And GSBB has touched 400 of these young lives.   Research shows that without the support of programs like GSBB, these children generally do not fare well.  They must cope with the stigma of parental involvement in the criminal justice system, the loss of a parent and the isolation that comes with coping with these issues in silence.  GSBB believes it is important to bring these children out of the shadows and give them the support they need.

While our goal is to provide the best experience for girls, we know that investing in meeting the needs of these moms, will ultimately yield a return for their daughters. GSBB’s influence on inmates’ lives extends beyond good parenting skills offered during bi-weekly visits.  GSBB also increases an inmates chances of successfully re-entering the community.  For example, GSBB has a positive impact on visitation.  Inmates who receive visits during their incarceration have a lower recidivism rate when they return to the community than do inmates who do not receive visits.  Research over many years has shown that inmates who maintain family connections during their incarceration have a higher likelihood of successfully reentering the community.  In addition, GSBB has established a new partnership with a non-profit organization that provides coding skills in modules appropriate to participants' learning styles and baseline skill levels.  Moms are better prepared to re-enter the community and the workforce upon release.

During 2017 - our 25th year of thoughtful, intensive programming for girls and moms- GSCM was permitted to hold a resource fair and mother-daughter celebration at the Maryland Correctional Institution for Women.    In an effort to honor this milestone year,  mothers, daughters, alum and founders all shared in the joy and strength created by this sisterhood at a special Anniversary event.   A resource panel was assembled, to assist the current inmates in accessing needed support to aid in their re-entry.   This unique event was made possible by officials who graciously allowed these women and daughters to share the experience that binds them at the institution that housed their sleep-overs, troop meetings and bonding time.

The impact that Girl Scouts Beyond Bars on one child, one family, one community cannot be understated.  Success for participants demands long term commitment.   We hope you will help us continue our ability to be with these moms and daughters today and into the future. 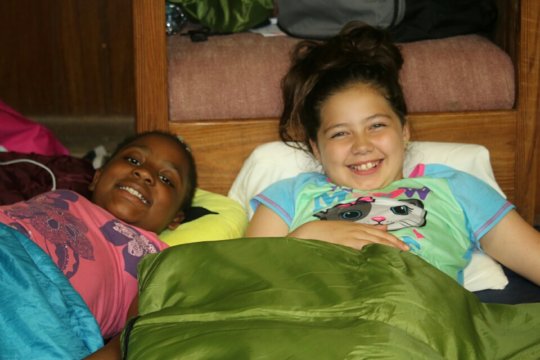 Girl Scouts of Central Maryland has achieved a milestone in 2017 -- 25 years of continuous operation of the Girl Scouts Beyond Bars program. In that time, it has served hundreds of girls, including some who began as 5-year olds and, because of the duration of their mother’s sentence, remained in the program for 13 years until the age of 18.

In this 25th Anniversary year, GSCM sought out long-tenured participants for lessons learned.  In the words of one of GSBB’s many success stories, “JM” provided a most poignant view of life experiences with GSBB.   When she attended her first GSBB meeting, she was the youngest person in the room.  She felt intimidated by the surroundings and by the older girls.  Within a short period, the older girls became a support system to her.  They helped her acclimate to her situation of having an incarcerated mother.  When she sees other girls in her local neighborhood living with this same situation, she sees girls who have serious problems, or become run-aways.  This is when she is most grateful for having the family-like support that GSBB offered.   It kept her focused and out of trouble, especially as she was transitioning to high school.   She knows that without GSBB, she would have had no way to see her mother.  She enjoyed seeing her mom, and having a relationship with her.  JM knew her mom loved the program.   In a correctional facility, other people try to bring you down.  But GSBB helped keep her mom in good spirits.  Even if only a few days a month, the moms need it.  Over the years, JM did everything that Girl Scouts has to offer. She loved the fashion show they had at MCIW.  She got to go to Six Flags with the troop.   She went to overnight camp.  She was placed into positions of responsibility.  She performed kapers (chores) at camp, such as cleaning the cabin.  She made a quilt and made s’mores. Over time, she became one of the “older girls” and the younger ones looked up to her.   She now knows how to deal with life’s most difficult situations.  She wants to volunteer with GSBB one day – when she finishes college.  She will be a sophomore at a university this fall;  GSCM assisted her in securing financial aid to make this possible.  She has great plans for a career in the sciences.  JM’s strongest recommendation to GSCM was “Do what you have to do to keep it.  Don’t let it go.”

Since we last wrote to you, some mothers were released and newly incarcerated mothers were added to GSBB.   Their ages range from 26 to 43. Eighty-two percent remained infraction-free during this time. This major accomplishment shows the effectiveness of the incentive provided by the ability to spend time with their daughter.   Forty-seven percent of mothers had no contact with their daughters outside of the GSBB program.   Ten percent are incarcerated for 4-6 years, and 10% for 7-10 years.  Fifty-five percent of the mothers reported that the fathers of the GSBB daughters are also incarcerated.

In addition to enhancing the communication and parenting skills of the mothers, GSCM provided wellness/ stress reduction, problem-solving and other skills to the moms. Ninety five percent of mothers report the development of a better relationship with their daughter as a result of GSBB.  Eighty-nine percent of daughters are better students and have maintained good grades since being in GSBB.

In recognition of our 25 year milestone, GSCM is responding to community need in order to reach more children impacted by the traumatic separation from parents that occurs in Central Maryland. Local government agencies have recently released reports on the concentration within certain schools of children whose parents are incarcerated. GSCM already provides Out-of-School Time programming in all 21 of the Baltimore City schools listed.  The impact on learning and social/emotional health is just being brought to light. This year, GSCM has expanded its in-school series to address social emotional learning needs of children impacted by traumatic separation issues, while not requiring girls to self-identify as being part of the impacted population.  An evidence-based curriculum is being incorporated into programming delivered in specific elementary schools starting in September, 2017. 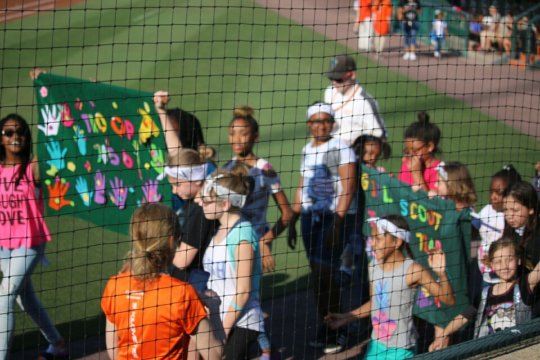 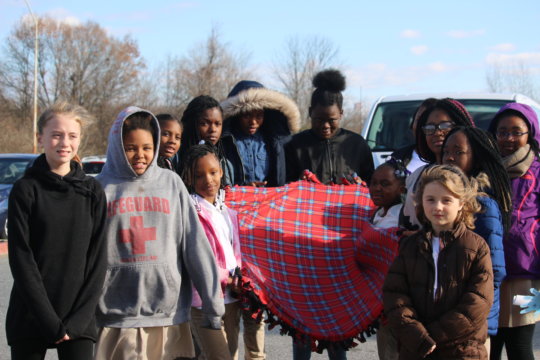 GSBB girls on a recent visit to their moms

How bittersweet to report to you that the Girl Scout Beyond Bars (GSBB) Program was asked to interview many new moms for the GSBB Program. Interviewing the moms is a step in the process -- when mothers are referred by the Maryland Correctional Institution for Women (MCIW) to Girl Scouts of Central Maryland for admission into the GSBB program.  It means that there are more newly incarcerated women with young children who have entered the correctional system.  It also means that there are more girls and young women who were abruptly and unexpectedly separated from their mothers, and from their homes and families.

The group of girls who have become the newest members of the GSBB program are younger - in Girl Scout language they are Daisy's and Brownies.  They are at a very vulnerable and formative age, where family trauma of this magnitude can have longlasting impact without the introduction of a great support system to surround them.

You are the reason that GSCM can continue to offer this great support system to these new girls.  You are the reason that the girls who are remaining in GSBB - many for the entire duration of their mother's sentences - are sustained in this important program, and are able to welcome these newcomers into an environment of understanding and common ground.

As GSBB enters its 25th year, the program is undertaking a renewal process itself.  Stunned by recent data released by the Economic Policy Institute, GSCM is addressing the need among female elementary school students who have a parent who is or has been incarcerated (one in four African American children per this report), by expanding the capacity of the staff to provide culturally competent, important programming to more girls impacted by parental incarceration. Educators have not paid enough attention to what this report calls the criminal justice crisis, which affects children's learning, causes these children to be more likely to drop out of school, and even suffer adverse health consequences.

GSCM is committed to providing these girls with opportunities and experiences that positively impact their journey into adulthood.  We do this through ensuring that all girls regardless of their background, ethnicity or circumstance have the opportunity to gain knowledge and skills that will help them be successful now and for the long term. 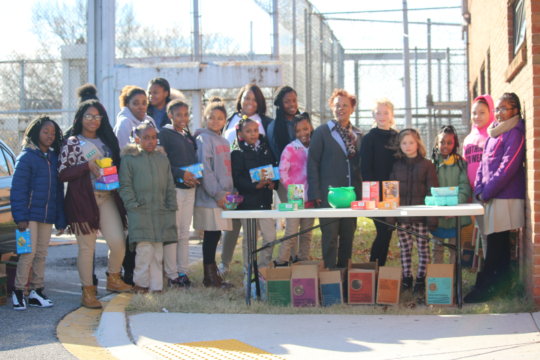 Cookies at MCIW - GSBB girls become entrepreneurs
‹ 1 2 3 4 5 6 7 8 9 10 ›
WARNING: Javascript is currently disabled or is not available in your browser. GlobalGiving makes extensive use of Javascript and will not function properly with Javascript disabled. Please enable Javascript and refresh this page.