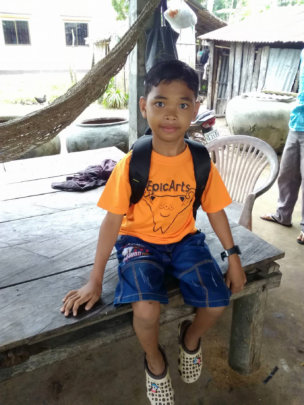 Pektra ready for the trip to his new school

This month we're celebrating some wonderful news at Epic Arts, former student Pektra has been selected for a scholorship to Lavalla School. Lavalla School is the only school providing formal education to children with physical disabilities thatis approved by the government.

We couldn't have helped or supported Pektra's without your generous donation, so we thought we'd share his epic story with you.

"My Son Pektra joined Epic Arts Special Education Programme (SEP) in 2008 at age three. I didn't notice anything different about Pektra until I had my second child, Yanni. She was a very independent baby and a lot more physically able than Pektra despite the age gap. I knew something was different because he was three years old but he hadn't begun to walk but Yanni was running around already at only 9 months old. I was very worried for my son and I asked a lot of people about what I could do, I heard about Epic Arts from a friend and decided to meet with them." - Sina, Pektra's mum

There is  little understanding of disability in Cambodia  and diagnostic resources are extremely limited and expensive. Pektra's family assumed he had a learning disability. Pektra joined Epic Arts' Peace Class, a class for young children with learning disabilities to learn literacy, numeracy & life skills.

Staff and teachers soon realised that Pektra learnt at a quicker pace than the other children and he was eventually diagnosed with severe Cerebral Palsy.

"I met Pektra and at first he was very shy little boy. At snack time the teachers had to help feed him and hold him to sit up, he couldn't do much for himself, his motor skills were very poor. The longer Pektra stayed at Epic Arts the better his movement became and eventually he was able to do everything by himself. He is a very smart boy and I was always impressed with his literacy and numeracy skills" - Kagna, SEP Team Leader & Teacher.

Pektra loves to learn so despite not having a learning disability he continued to study in the class until he was old enough for mainstream education.

Our SEP admin team got to work on advocating for him to join his local primary school. It took a while but Pektra was eventually accepted to a school near his home and just like the rest of the children in his village Pektra began primary school at 6 years old.

Although that's not where our story ends, after a child with a disability is acepted into school we continue to follow up with them to make sure they're getting the best education. Chanthat, our Social Worker, has been working with Pektra, his family & the school for the past five years.

"My job is to make sure Pektra is being fully included in school and  to ensure that he is happy. At first it was difficult because the teachers didn't understand his special needs or even the fact that he was able to learn, but eventually they saw how bright he is and that he is just like the other children. Over the years it has become easier but we were still faced with challenges, one of the biggest challenges has been that the school isn't accessible so a big issue was bathroom facilities. Pektra is twelve years old but he has to wear a nappy to school!"- Chanthat, Social Worker

Pektra completed primary school earlier this year but the closest secondary school is far from his home and because Pektra's mobility is limited it wasn't feasible for him to study there. Chanthat worked tirelessly on securing a scholarship for Pektra to join a school specifically for children with disabilities.

"I'm so happy that my son can go to Lavalla, he loves to learn English, Computer and Khmer Literacy. He is a happy child and he loves to play with other children. He is most excited that they have a swimming pool at his new school. Swimming is really good for his mobility and he loves playing in a pool" - Sina, Pektra's Mother

"I'm happy that Pektra has the opportunity to study like other children, his disability shouldn't stop him from getting an education. He is a great student and I think he has a bright future ahead of him" - Kagna, SEP Team Leader & Teacher

"I'm happy because Pektra has the chance to make his life better, he will be going to a school that's accessible and inclusive if he never joined Epic Arts I don't think he would have ever been enrolled in school" - Chanthat, Social Worker

Pektra is now enoroled and boarding at the school and we wish him well!

If you'd like to help us provide education to more children with disabilities please donate to our project. 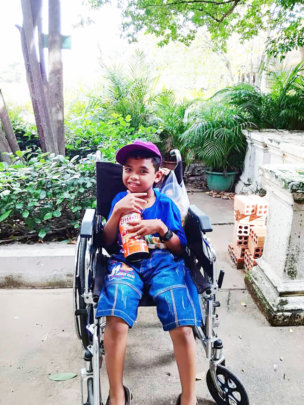 Pektra enjoying a day out 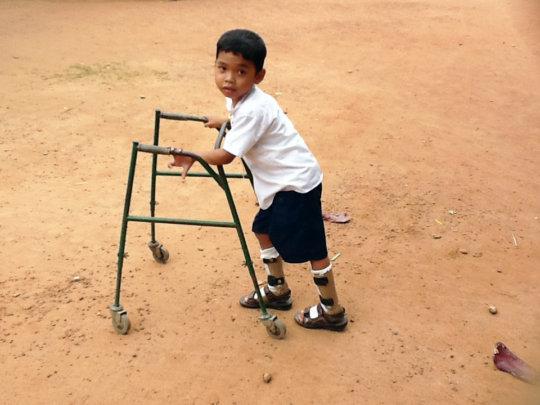 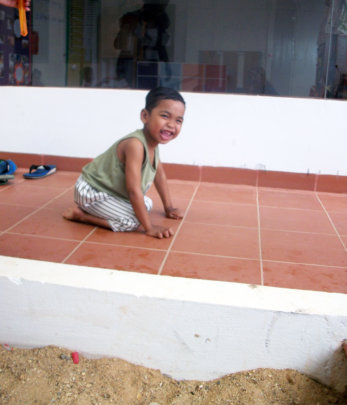 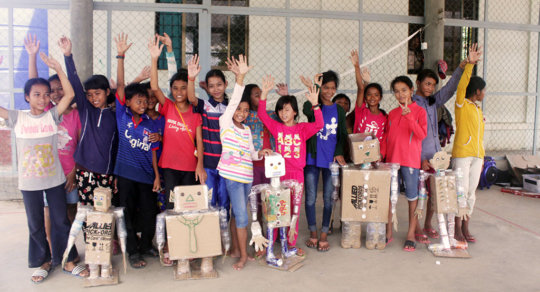 Thank you for supporting the Arts in Schools Programme in Kampot, Cambodia.

Last month we released our 2016 Annual Report (see the full story here) We’ve been looking back at our impact and stats for all our programmes.

For the Arts in Schools project in 2016 we delivered 42 workshops, an average of around 7 per month during the school year.

These broke down to:

We had 4 different classes take part in the workshops, every term we would get a new class of children. 120 children took part in our workshops in 2016, and on average each child took part in 14 workshops.

This week we visited one of the schools where are team were delivering a handicrafts workshop.

We spoke to a few of the students during the workshop and asked them why they liked arts in schools:

"I really like doing art activities at school. Today we’re making braclets I’ve never made a bracelet before. My favorite part of the workshop today was choosing the different colour beads with to make a beautiful breaclet. It's a new skill for me and I think I will make braclets again.” – Student, 10 years old

“This is my first time taking part in Epic Arts ‘Arts in Schools’ workshop. I enjoyed the workshop because it gives me the benefit of being able to understand some of the ways to do art, such as making bracelets and paper flowers. In the workshop I learnt that you can make art just by using simple materials.” - Student,  12 years old

Thank you for your continued support in making our Arts in School project a possibility. 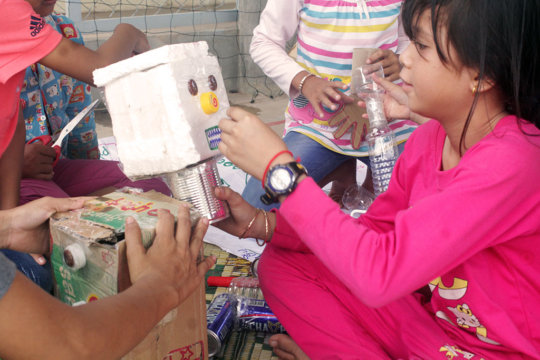 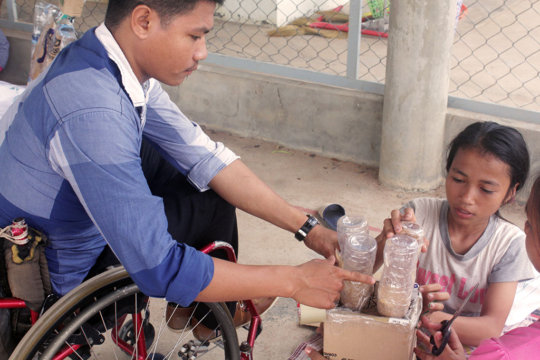 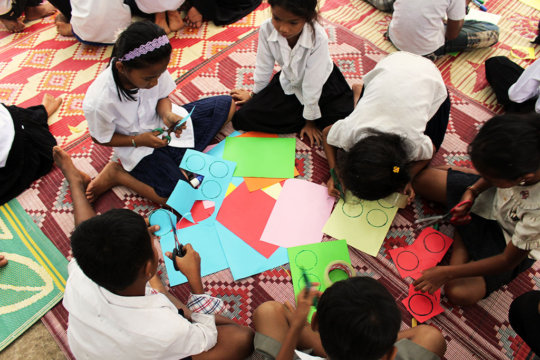 When I Joined Epic Arts My Dreams Came True! 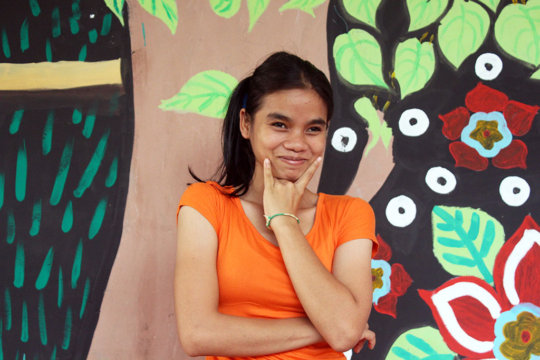 Savun in costume ready for a performance

I started acting at school when I was 15. I loved acting, but it was something I did for fun. My wildest dream was to become a performer.

My time at school was coming to an end. One day I was reading the newspaper and wondering what to do next. That's when I saw the advert for the Inclusive Arts Course.

It looked perfect, I was so excited about the course it had all the things I enjoyed doing. I borrowed my friends phone and looked up Epic Arts.

I saw the Epic Arts Happy video, I watched it again and again, I thought all the dancers looked so cool. I wanted to do that! I asked the School Director if I could apply to join the course.

"Growing up people in my community gave me a new name ‘Broken Leg’."

When I was growing up people didn’t call me by my real name, people in my community gave me a new name ‘Broken Leg’.

I was in an accident when I was three months old and my right leg didn’t develop in the same way as my left leg.

I grew up with a leg that wasn’t strong so I knew that I had to be strong. I didn’t like the people who called me ‘Broken Leg’, they made me angry. I became determined to be smarter than them.

I knew I couldn’t do traditional physical work so I made it my mission to study hard and get good knowledge. I could prove all the mean people wrong and I would be able to support myself.

"I’d never seen someone like me in a important job."

When I saw that the Director of Epic Arts was a Cambodian women with a disability it made me feel proud!

Seeing Sokny as the head of an organisation gave me more energy to keep going, to keep trying, to keep gaining experience and growing my knowledge and maybe one day I could be a role-model to a girl with a disability.

After a week at Epic Arts I knew that I defiantly wanted to join the Inclusive Arts Course. It was all the things I loved doing and Epic Arts had many staff with disabilities who were inspiring to me.

“When I came to Epic Arts my dreams came true!”

Now I’ve graduated from the course, I’m much more confident in myself. Before I used to think that I would fall over if I tried to dance or that my leg would break!

Before I joined Epic Arts I didn’t like to work in a team, I worked by myself and that's how I liked it. Now I like working together with others, it makes me happy to be in a supportive community.

I’ve had a lot of opportunities at Epic Arts to gain different types of work experience. As well as studying I worked at the Epic Arts café on Saturdays and I also worked at the Come Back Brighter show. I liked working with the customers and learning to make cake.

“The biggest thing I learnt during the course is that if you have a disability don’t think that you can’t do things. Believe in yourself - you also have value to society!”

Savun is now a performer at Epic Arts. She works in the Theatre company to deliver workshops, create and tour performances about issues in Cambodian society.

We are currently looking for new students to join our Inclusive Arts Course.

Please donate if you’d like to support another young person to join the Inclusive Arts Course.

Donations big and small make a huge difference to our work and any gift helps us to continue to change lives. 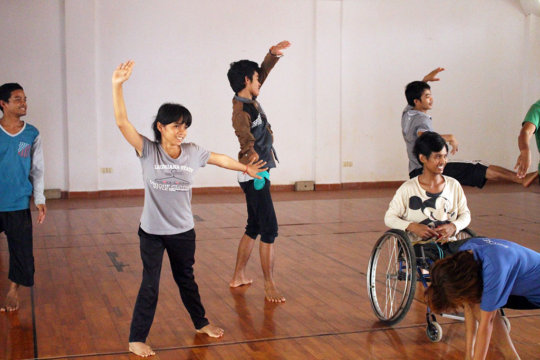 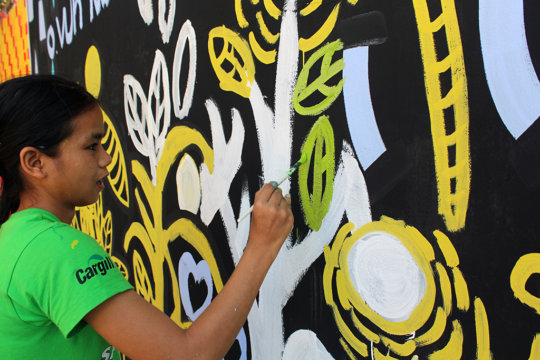 Savun painting a mural she designed 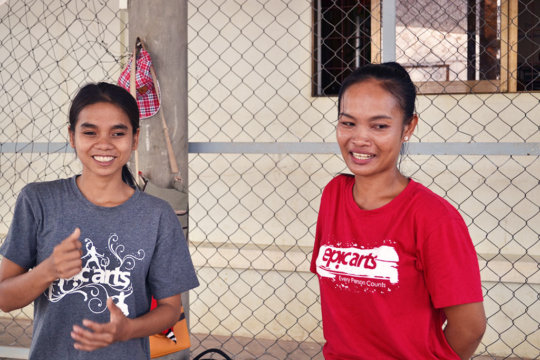 Savun delivering a workshop at a local school