Saritha lost her father when she was 5 years old. She comes from a backward caste family from rural Telangana. Her childhood was full of suffering since her mother struggled to make ends meet. Her mother migrated from their native village to Hyderabad in search of a better life but here too nothing worked out for them.

Saritha and her siblings had no one to take care of them when their mother went out for work. They had no opportunities for education, shelter, food and healthcare of any kind. The Rainbow Homes social mobiliser found this family in dire straits and decided to offer shelter to Saritha after speaking to her mother in 2011.

Initially, Saritha struggled with the absence of her mother. She would often wail waiting for her mother to come or call her. Slowly, the home team started giving her responsibilities such as leading the sister's committee, and various other committees. She also took various initiatives within the home and developed loving relationships with the other children.

In 2013, Saritha successfully completed her class 10 exam with 76% marks. She got a merit seat in Durgabhai Deshmukh College in Hyderabad and is now in her final year. She did very well in her first two years in college. Her college principal feels proud for having such a brave girl in the college. We know Saritha will keep scaling heights and break all barriers to reach her true potential in life. 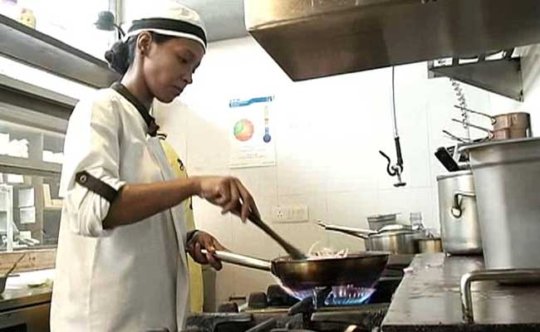 Lily was born in a south Delhi slum to an Assamese family; they were four siblings - an older brother and sister and a little brother. She described her father as a local healer.

In a rapid series of tragedies, Lily lost her father, followed by the mother a month later of tuberculosis. Her sister committed suicide soon after. The ground had fallen under her feet, taking any sense of family and community that she'd known.

At the age of 10, she ended up on the streets, working as a rag picker. Very quickly, she learnt how protectors become predators. In a home where they slept many nights, Lily and her companions were often abused by the owner's sons. To protect herself she'd find a quiet clearing among the trash and build a wall around her with cardboard sheets. Inside, she felt no one could find her. She felt safe in her ragtag fortress.

Lily, 14, discovered that she had an aunt in Delhi, who lovingly took her home for Eid. A month went by during which she was treated like their own daughter, she said.

Then, things changed. She was forced to drop out of school and work at a shoe factory. She was often beaten. And in an appalling but all too familiar turn, the aunt's son allegedly raped her. Again, she ran away and another fortunate meeting finally led her to Kilkari Rainbow Home.

For all the brutality she had endured from those that she trusted, Lily wanted to make her own life. Her way out was food; she remembered her father standing over the large kadhai's at the wedding feasts for the community.

A skill development agency contacted by the Kilkari Rainbow Home helped place Lily with Tres restaurant. They offered to take her on. Two years later, she rose from cooking staff meals to the rank of a commis or a junior chef at the restaurant.

"I'm a commis 2. There's commis 3 and then you become a chef," she said, her eyes glowing expectantly. Her favourite dish? She thought for a minute. "Mushroom risotto."

Standing on her own feet

There is nothing more tragic than the loss of one's parents. Without a parental roof, a child is most vulnerable with no love and no protection from the cruelties of this world. Padma lost her parents at a very early age. She was the youngest of three siblings and her family suffered immense trauma and irreparable damage. She was taken in by her neighbours on the pretext that they would take care of her well-being. But very soon, the promise of care was broken and the physical abuse started. She was scolded and beaten mercilessly. She wailed and cried for help. The whole neighbourhood heard her cries everyday but the torture continued. Until one day...

Every dark night ends in a bright day

Padma's neighbours could not bear to hear her cries anymore. Collectively, they complained to the nearest police station. Padma was rescued from the clutches of her neighbours and for sometime put in a government shelter. On hearing her story, a social mobiliser from Rainbow Homes decided to bring her in. Padma was very reticent in the beginning and did not take part in the regular activities of the home. She was counselled and slowly she started taking interest in both studies and extra-curricular activities. She was enrolled in a bridge course to help her reach the level of her age appropriate class. Post completion of the bridge course, Padma was enrolled in an Open School program to enable her to complete her secondary (grade 10) education.

Reconnecting with her roots

In the meanwhile, a constant effort was on to bring some familial connect back into Padma's life. Padma would refrain from talking about her past but slowly she opened up. She spoke about her elder brothers, the location of her house, and the sufferings of her childhood. The social mobiliser was able to piece together the fragments of information she kept giving and managed to locate her family. After several years of being apart, Padma finally found her family back. She found happiness beyond any measure.

Padma's long struggle is finally over. She has finished her secondary education with 1st class marks and now has a family to call her own. In the meanwhile, she finished a tailoring course at Centre for Social Service in Nagercole. Today, she is pursuing higher education and has a job in Secunderabad (Telangana, India) where she earns Rs. 4000 a month. She still comes during her holidays to the Rainbow Home - the home which gave her a fighting chance to stand on her own.