From rag picking on streets to hallways of College 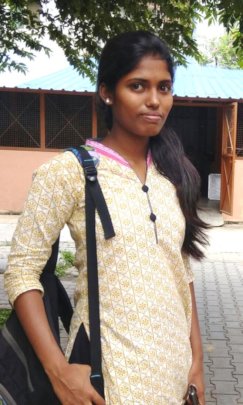 Amrutha’s story:  Amrutha was a 13 year old orphan when she was found rag picking on the streets of Bengaluru.

Her father was an alcoholic and beat up her mother almost every day. One day her father drank heavily, picked up a quarrel and started attacking her mother, she fell down and died instantaneously.  Police arrested him on a murder charge and he was incarcerated for a long time.  Amrutha was admitted to a temporary home by an Aunt.  Later on, she became a member of Rainbow Homes (Auxiliam Navajeevana Society, Chamrajpet) in the year 2011.

While she was in Navajeevana, efforts were made to search for her father.  Although he was found, he advised her to remain at Rainbow Homes as she seemed happy there.  He ultimately died due to excessive drinking and this left a gap in her life coupled with the fact that she also lost complete contact with her brother despite searching long for him. Slowly but surely, her emotional wounds  healed in the  loving and caring atmosphere of Rainbow Homes and she grew  up into an intelligent, soft spoken and confident girl with an aptitude for Science and Writing.

Circa 2017, Amrutha joyfully expresses her gratitude to Rainbow Homes who encouraged & supported in her aim to successfully pass the 2nd Pre University Exams. She has recently enrolled in the Bachelor of Commerce degree program at St. Aloysius College, Bengaluru. She won a Rs.1000 Gift cheque at the inter college memorable quiz competitions. Recently, she was awarded Rs. 25,000.00 from Guardian of Dream Foundations for her success in studies. The dream of her life is to become an auditor. Amrutha tries her level best to make use of every opportunity that comes her way. She also contributes articles to the “Rainbow Sathi” which is a quarterly magazine that we bring out - articles & stories written by the children at our homes across India.

Congratulations to Amrutha………she has come a long way!!

Hard work can give you wings 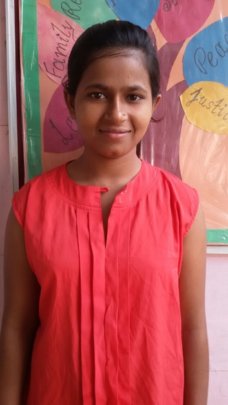 Dilruba wants to become a doctor

Dilruba joined Kilkari Rainbow Home in Delhi in 2008 when she was around 8 years old. She hails from West Bengal and like millions of other Indian families hers too migrated to Delhi in search for a dependable and consistent means of livelihood. With no friends or family members to tether them to the city, Dilruba's family set up a small shanty in slums offsetting the New Delhi Railway Station, and started to earn their first wages through ragpicking.

Irrespective of her young age at the time, and like most other children in her new neighbourhood, Dilruba also participated in the family’s new profession to contribute as best as possible to their joint, meagre income. While on the street, she met with representatives of an NGO that provided street-based, non-formal education services. These good Samaritans referred Dilruba to Kilkari Home, encouraging their parents to let her participate in the Rainbow Home program for proper security, education and nurturing.

Initially, only Dilruba joined the home; however, after her father’s death her younger sister also joined us at Kilkari. Dilruba’s mother is now working as a sanitation worker at Central Park and is able to earn an income off the street.

Dilruba is a strong example of hard work and diligence. She is a highly participative child that already exhibits strong leadership skills. Now 16 years old, she is currently in Class 11th at Daisy Dales School in Greater Kailash-I, where she receives an education free of cost based on merit and need. She is interested in becoming a doctor, and the home team is working on charting out a career and training plan for her, in keeping with this dream and owing to her solid academic record.

Maria on top of the world

In the coming months the world will see 13-yearls old Rainbow child, S. Maria in “Poorna” a film on youngest mountaineers who scaled Mount Everest made by renowned actor turned film maker and social activist Rahul Bose. A bright, active resident of Aman Vedika Rainbow Home, Musheerabad, Maria was born in Hanumakonda village of Warangal, Maria grew up in children’s home in Bangalore where she studied till class 7. Due to a sudden twist of destiny, she found herself in some unfortunate circumstances on the streets. She was found by the social mobilisation team of the Rainbow Homes and was invited to the Aman Vedika Rainbow Home. Maria shares,“During shooting, I enjoyed a lot because I never got a chance to act in a movie. I feel lucky to have met Rahul Bose and feel very happy to have played an important role in the film. There are so many child marriages happening, hope after watching the film they will become aware of how wrong this is. I am filled with excitement and waiting for the film to be released.”.