By Freedom Firm (local partner) and Free a Girl - -

This report presents an overview of the outcomes of the Rescuing girls from forced prostitution in India project for the full period of 2015.

We are proud of the work of the rescue teams at Freedom Firm, which has enabled these girls to escape the horrors of such exploitation and start to build their own paths for a better future.

The aftercare team travelled across the country to follow up on girls that were previously rescued and to check on their progress. They conducted 68 home investigation visits for recued girls and other cases referred from other shelter homes and police in various states. In total, the aftercare staff followed up with 215 girls at their own new homes, government or private shelter homes or through telephone conversations.

The team also conducted group counselling and individual counselling for 35 to 40 girls as well as facilitated recreational activities such as drawing, painting, crafts, Mehndi designs, indoor games and sports.

As part of the vocational training component of the project, a jewellery-making training was conducted in different regions – Maharashtra, West Bengal and Ooty – training a total of 34 girls in 2015.

In 2015, the legal team at Freedom Firm contributed to bringing about a ruling from the Bombay High Court that traffickers in most cases should be denied bail in Maharashtra.

The legal team presented information to the Bombay High Court as part of an ongoing Public Interest Litigation to ensure that accused traffickers cannot abscond when the case comes up for trial. Often traffickers secure bail and they abscond at the time of the trial, and then the police report that they are untraceable.

The team continued following up on the case and by November 2015, the Bombay High Court ruled that a trafficker in humans who is a habitual offender, has been violent, and has trafficked a minor amongst other things or a brothel owner whose brothel has not been sealed cannot be released on bail. The Judges also requested that the Maharashtra government creates a database of traffickers and those who have absconded after securing bail.

This is a win and a small step forward for victims of trafficking and sexual exploitation, particularly minors. Such a ruling can help prevent the stalling of trafficking cases and the release of accused traffickers on bail so that they can face trial. The legal team worked throughout the year on this case and contributed to this great result, making justice more accessible for the girls.

Below are two short case stories from Freedom Firm describing the stories of two recued girls who were re-trafficked, devastatingly, and who have endured drawn out legal processes in order to access justice and freedom. These cases remind us of the continued need for projects such as these to liberate young girls from sexual exploitation.

Sita*
Sita was first rescued in February 2013 from the Nagpur red light area and was soon released to her family who claimed custody. She was later found in the same red-light area in August 2013 and was rescued a second time. Aware of the vulnerable circumstances surrounding her, the social workers carefully followed up on her case. They made sure she was safe and prepared her to testify in court. Sita testified boldly in court in September 2015 against the accused. Sita says, “I hope that my testimony will prevent the accused from engaging other girls in prostitution.”

After far too long, the court passed orders in 2015 that  we believe will result in Varsha’s transfer to a very good and safe shelter home in Mumbai. Varsha was rescued in June 2011. Due to the systemic failures from courts and public service providers that were encountered at that time, Varsha was released and re-trafficked. Fortunately, the rescue  team was able to rescue her again in 2013. At that time she indicated that she did not want to be in the prostitution business and the legal team were thrilled to be able to advocate for her. We didn’t realise it would be another 2 years of continuous effort and difficulty to get the orders we sought on her behalf.

*The girls’ names have been changed to preserve anonymity and confidentiality.

By Freedom Firm (local partner) and Free a Girl - --

This update presents an overview of the activities of the Rescuing girls from forced prostitution in India project. We’ve also included a brief story of the struggles experienced by a rescued girl, to help explain the nature of the situation and the challenges these girls and our local partner face.

A more comprehensive overview  of the results and outcomes of the project for the full period of 2015 will be posted in the next report in March 2016.

The rescue team has conducted numerous investigative trips and 10 raids to date (November 2015), in which 34 girls have been successfully rescued. Out of the rescued girls, 14 are children under the age of eighteen years old.

We are proud of the work of the rescue teams, which has enabled these girls to escape the horrors of forced prostitution and start to build their own paths for a better future.

It has been a busy time for the aftercare team as they travelled across the country to follow up on girls that were previously rescued and to check on their progress. The team made home-inquiry trips in the states of Rajasthan, Madhya Pradesh, Telangana, Chhattisgarh and West Bengal. The social workers also regularly visited previously rescued girls residing in shelter homes in Pune, Kolkata, Nagpur and Mumbai, to provide follow-up support and counselling. The aftercare team has also facilitated medical assistance and carried out hobby classes, group therapy and counselling to over 60 girls at shelters in Nagpur and Pune.

Freedom Firm’s jewellery-making vocational training programme, Ruhamah Designs, also supported by Free a Girl, conducted a one-month training program in the month of June. They trained interested girls to gain a livelihood in jewellery making. Ten girls who were part of the training are now employees at Ruhamah Designs creating beautiful jewellery, three days a week! The other two days a week the girls receive life skills training and basic, non-formal education. This aims to equip them with the tools to be able to cope with the challenges of daily life and to help them integrate into mainstream life.

The legal department consists of Freedom Firm staff as well as local advocates in cities such as Mumbai, Pune, Nasik, Ahmednagar, Sangli, Akola and Nagpur. Freedom Firm has worked alongside these advocates to follow up on several cases in the past months to continue fighting for justice. The legal team has also provided legal aid and coordination and logistics support for the girls’ court depositions. The team also advocated before government officials for the protection and safety of rescued girls.

Struggling for protection and a better life: a rescued girl’s story

Below is a case from Freedom Firm explaining the situation of young Priya*, a beneficiary who was rescued a few years ago. Priya’s case reminds us of the dangers and continuous threat of re-trafficking of victims of forced prostitution. It also reminds us of the weak legal and government systems that often do not sufficiently protect these girls.

When Priya was rescued in 2013,  she was only 11 or 12 years old and probably the youngest girl Freedom Firm has ever rescued.

The woman accused of forcing Priya into prostitution, escaped and fled during the raid of her brothel in May 2013. She applied for anticipatory bail but was denied. We understand that she is well-known in the red-light area with good connections. In spite of the anticipatory bail being denied, the accused woman was never arrested.

After the rescue, Freedom Firm added Priya’s case to the ongoing Public Interest Litigation (PIL) in the High Court in order to protect her. As a result the Court ordered “no release or transfer to take place unless approved by that higher Court.”

The accused woman visited Priya in the government shelter and submitted applications to the Child Welfare Committee for custody even though she isn’t Priya’s mother. All of this was done with active warrants under the accused’s name. The Child Welfare committee denied this request for custody, but then the accused appealed to the Sessions Court. After Freedom Firm learnt about this, they submitted documents, including the High Court directions,  to the Public Prosecutor to oppose any release. The accused got wind of this and withdrew her application for appeal.

Priya’s case is just one among approximately 20 mentioned in the PIL before the Bombay High Court, Nagpur Bench. Each case reads a little differently, but the common thread is that the perpetrators who forced these girls into prostitution aggressively attempt to re-traffick rescued minor girls by directly engaging the very same government and legal systems that are set up to protect those girls.

We are trying to enroll Priya in an education program but even that is slow-moving, waiting for authorities to act. Priya is still a child, and deserves a life and still has a chance for one.

The legal team has sought a court order for Priya’ss rehabilitation, who is still a minor (under the age of eighteen). The application requested that she is transferred to another home in Mumbai so that she can continue her education. We are waiting for government authorities to submit their plan and hoping for a positive judge to take this case further.

*The beneficiary’s name has been changed to preserve anonymity and confidentiality. 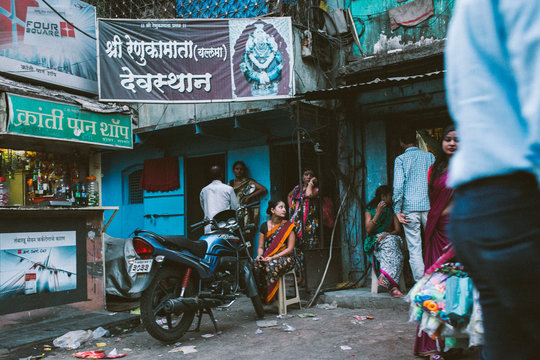 The rescue teams have been working hard over the last months.

Following investigations, the rescue team freed three girls, all of whom are believed to be minors, from a brothel in the Red Light District of Nagpur on 10th July 2015. An earlier attempt did not succeed as the brothel keepers heard news of the raid beforehand and therefore shut down the area. However, our colleagues did not give up that easily! The next day they went back with the police and successly rescued the girls.

Free a Girl was informed that on the 30th July 2015, the World Day against Trafficking in Persons, the rescue team executed a raid in the town of Koregaon for the first time. With help from the local police, they successfully rescued two minor girls under eighteen and two girls over eighteen as well as arrested three brothel keepers. A reduction in minor girls forced into prostitution is being seen in places where the rescue team continuously and successfully conducts raids, enabling the team to focus on new areas. This was good news on a special day.

On 6th August 2015, the team conducted a successful rescue raid in a brothel in Wani, Yavatmal District. With cooperation from police they freed two girls. One of these girls is a fifteen year old minor and six months pregnant. Additionally, three brothel keepers and two clients who were exploiting these girls were arrested and are in custody.

We are proud of the work that has enabled these girls to escape the horrors of forced prostitution and now look to a better future.

‹ 1 ... 3 4 5 6 7 8 9 10 11
WARNING: Javascript is currently disabled or is not available in your browser. GlobalGiving makes extensive use of Javascript and will not function properly with Javascript disabled. Please enable Javascript and refresh this page.