All Children have a Right to Dream! 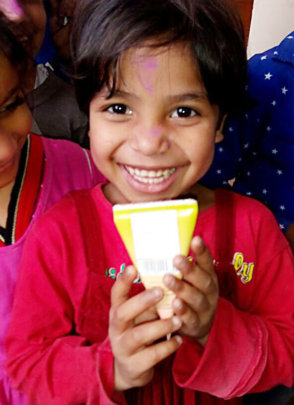 Happy child with a pack of juice

A child without education is like a bird without wings!

With your support, last year AROH embarked upon a journey to improve the educational status of 500 children. 10 RISE centres in Sangam Vihar in New Delhi are the hubs of action where children learn while they play. Besides the teaching learning activities, the children are seen engrossed in various creative activities like painting, singing, dancing, craft making, etc. Every child is trying to give expression to his or her thoughts. The teachers are always encouraging and appreciative of their creativity.

It has been almost an year at RISE! The confidence level of children has gone up; their learning outcomes are improving progressively; their behaviour has changed; and they dream! They spread joy and cheer on every festival and every important day celebrated with them. This month children enjoyed Holi (the Indian festival of colours) with their teachers. They had great fun at their centres.

Poor parents, who had never thought that their children even have a right to dream, have tears in their eyes when they come for parent teacher meetings at the centre. Ramesh, who is the father of 10-year old Tina, is happy to see his daughter performing so well in school. Ramesh is an illiterate labourer and cannot help his child in studies. His wife is also illiterate and works as domestic help. Both Ramesh and his wife wanted Tina to become ‘something’ in life. But they did not know how? They were helpless. RISE gave them a hope! Now Tina is learning fast and is one of the brightest girls in her school. “I want to be a doctor” says Tina with a twinkle in her eyes

RISE not only strives to provide a better educational status to poor and underserved children, but the programme also tries to improve their nutritional by providing food supplements. Holistic development of children ensures a healthier and brighter future for them.

With your support, 500 children are being led to a brighter future. They are being saved from misery and drudgery and given an opportunity to enjoy a normal childhood. Your generous support has helped us to serve and secure the Right to Education of more than 500 children living in extreme conditions of depravity. 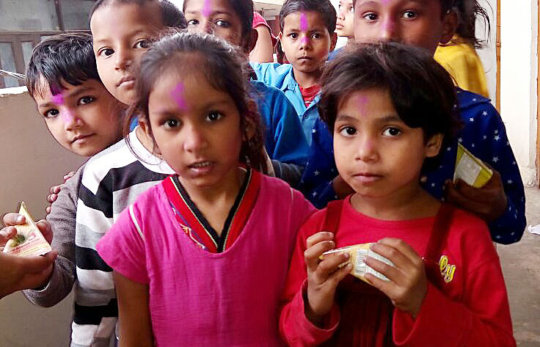 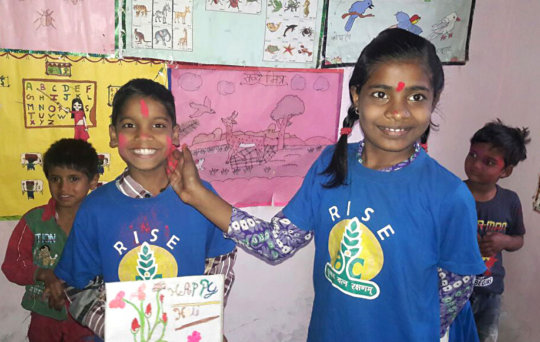 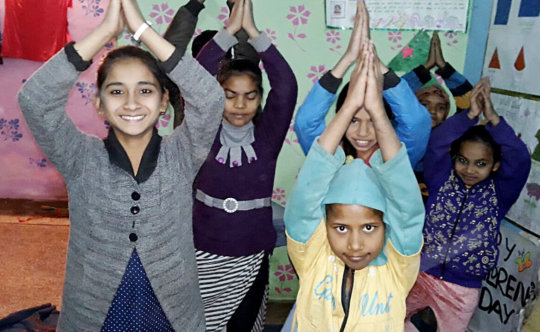 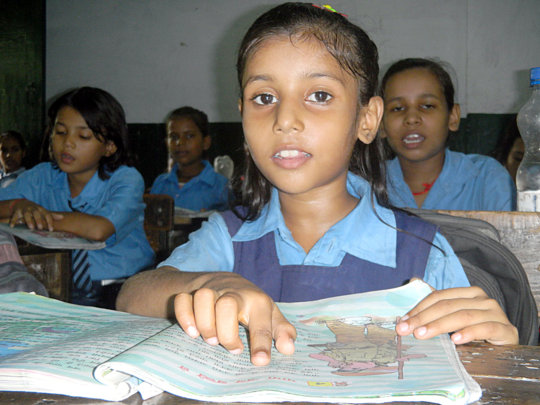 As the year 2016 comes to its end and RISE centres gear up for Christmas and new year celebrations, spirits are RISING high. With the new coming year, we resolve to make yet another year meaningful for our less privileged kids in slums. All thanks to all our funders, donors, volunteers, well-wishers and everyone associated with the project and the organization.

The aim of education is to bring changes not only in the amount of knowledge gained but also in the abilities to think and to acquire habits, skills and attitude which characterize an individual who is socially accepted and adjusted.

AROH thus believes in the “empowering” effect of education and its ability to enable people to develop a critical questioning attitude towards society, government, existing gender and cultural stereo types. And as you know RISE is a programme which provides an empowering and enabling environment to improve the learning outcomes of the kids from slums of Delhi.

Starting with a target of 100 kids we have managed to enroll approximately 500 kids in 10 centres. Apart from remedial education, teachers at RISE centres have been imparting behavioral education and different types of extra-curricular activities, such as arts and craft, drawing and painting, outdoor game activities, yoga, festive celebrations, etc. which have greatly helped in improving their personal attributes and confidence of children.

School teachers dealing with these empowered RISE kids report a marked improvement in the children’s behavior and learning.  All the RISE kids are getting much better scores in school after an year of intervention. Parents are relieved from the burden of paying high costs to private tuition. Children are spending more time in studies instead of getting involved in useless and vain activities in their free time.

Raj is an empowered child today. Raj, along with his father, moved from Maharashtra to Delhi when his father lost his job last year. He was enrolled in a Government school, but Raj’s education started suffering due to language and cultural differences in the new city. Raj’s parents could not afford private tuition due to poor family condition. Raj met one of the educators at RISE centre, and he was thrilled when she took him to meet other RISE children. “Now Raj is a bright student in his class and spends time in studies at home too”, says his mother. Various extra-curricular activities and engagement with children helped in bridging the cultural differences and Raj quickly started performing better in his class at his formal school.

Similarly Vishal, has a spark in his eyes. Vishal is the third among four children of his parents. His father is a daily wage labourer, who finds it difficult to arrange one square meal for the family. Vishal’s youngest sister had suffered a heart problem and the family could not save her as they could not afford the expense on treatment. Though Vishal was enrolled in a government school, sadly he could not attend school due to pressure of earning a living on his little shoulders. His father, a poor rag picker, took him to work and Raj remained busy picking waste and sorting it throughout the day. Once a RISE teacher saw Vishal and she was moved by his plight. There was a bright gem hidden in rags! The teacher convinced his parents to enroll him at the RISE centre and let him come for only two hours. Slowly Vishal started enjoying his sessions at the centre and showed excellent progress in studies. His parents have now pulled him out of labour and are paying full attention to his studies. Raj wants to be a doctor when he grows big! And RISE is helping him realise his dreams.

There is story behind every child. There is story of misery and drudgery, but dreams of a better future! We firmly believe that a small help goes a long way in giving someone a chance in life! Giving a child his childhood and his future!

We hope that your support to these kids would keep flowing to help us shape their future and give them a better life. Once again, thanks a lot for all your support. 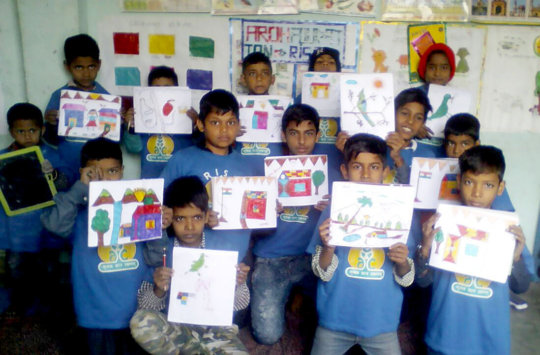 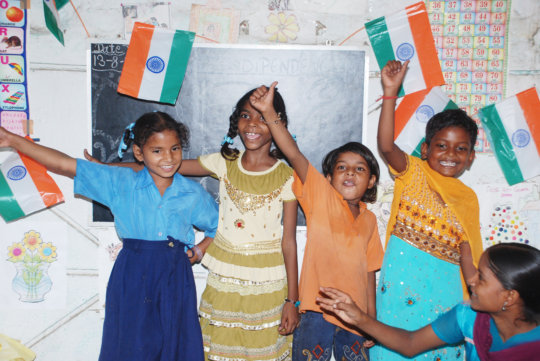 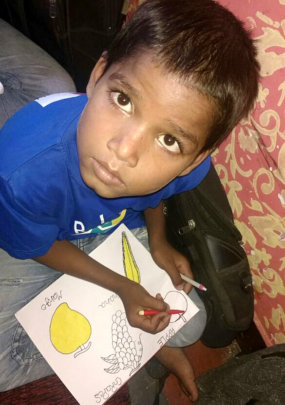 AROH Foundation embarked on the journey to bring hope to the lives of 100 poor and deprived slum kids living in Sangam Vihar, and as you are aware, with generous support from funding community, we were able to enrol 500 children at 10 RISE Centres.

As we are completing about one year of operations, a remarkable change is seen the children who have been attending sessions regularly and are showing excellent improvement in school attendance.

The community teachers are imparting project based learning to the children who have varied learning abilities. The curriculum is designed in a way which supports the school curriculum, yet ensures that children imbibe the fundamentals through the creatively designed modules.

Mrs Revati Mittal, one of the teacher at the MCD Primary School is surprised to see the improvement in children who have been enrolled at RISE Cetres.

The parents are indeed a happier lot and feel important with their regular engagement at the centres. The parents are aware of, not only of their child’s progress, but also of the problems and challenges faced by the child because of his family circumstances. Understanding the importance of education, many parents have now started focussing on child’s need to attend school ad study. They are no more taken for labour work!

With your support, 500 children are being led to a brighter future. They are being saved from misery and drudgery and given an opportunity to enjoy a normal childhood, which is their right. We have been able to secure the Right to Education of more than 500 children living in extreme conditions of depravity. Children feel that studies have never been so much fun and the time spent at the centres is most cherished enjoyable moments for them.

We are indeed thankful to your support which has brought a ray of hope in the lives of poor and underprivileged children, who can now dream of a future. The misery writ on their faces is being wiped away to get smiles on their faces. Their little lives are filled with fun and learning, a sense of security and safety… which your help has brought.

We look forward to further support from you to pave their path firmly on the road to success and glory. 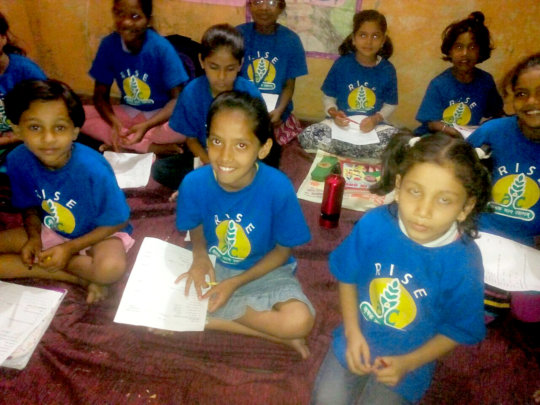 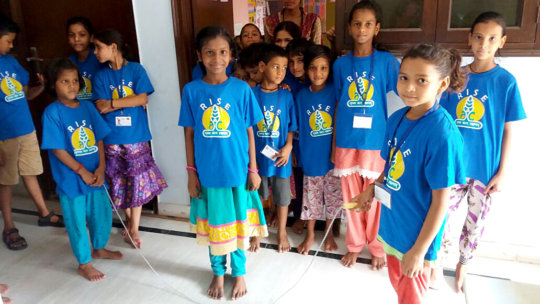 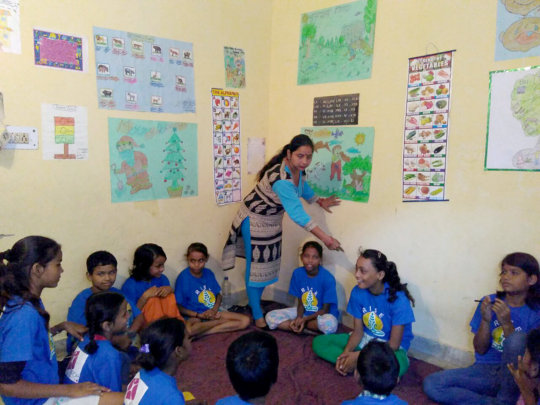 RISE Classroom
‹ 1 2 3 4 5 6 7 8 9 ›
WARNING: Javascript is currently disabled or is not available in your browser. GlobalGiving makes extensive use of Javascript and will not function properly with Javascript disabled. Please enable Javascript and refresh this page.