''I used to be very shy and cold not face people or raise my voice'' says Johi. She's a young woman from northern Pakistan, a place where the Taliban have great influence, and draw many young people into a life of violence. Their conservative views mean many women lead difficult lives.

''I was married at the age of 15 when I was still at school. After a few years of marriage, my husband lost his eyesight in an accident. The responsibility to take care of my husband and provide for my whole family fell on my shoulders. I was neither literate nor skilled and did not know where to go or what to do''.

Having been married so young, Johi faced a very difficult future, made even more difficult by violent militant groups in the area, and their views on women.

''One of my relatives helped me to become a health worker. Meanwhile, militants in my area forbid women to come out of their homes. This was a hard time''.

But despite the difficulties, and constant threat of violence, Johi persisted. She started attending training sessions with Aware Girls, a local organisation offering training in peace, tolerance, and women's rights.

''Gradually I started speaking in a smaller group and then a larger group [about women's rights]. Now, I have become a trainer myself and train womenin the community on hygiene, nutrition and an income support programme.

A few years back, one of my relatives was radicalised by listening to a local radio channel. She would not allow the younger girls in the family to go to school, or listen to music. When I found out about this I used my training to speak to her, and convince her of the value of allowing girls to go to school, and express themselves.''

Your support creates opportunities for people like Johi to develop their skills and contribute to health, safety, and peace in their communities. With your support, we can provide training to more young women like Johi, and help them practice peace and enable others to embrace peace within their communities. Like Johi, every individual who benefits from this program can have an exponential impact and inspire others to find alternatives to violent extremism.

Sharing the power of local peacebuilding

The local people we support around the world are continuing to build lasting peace in their communites, despite the daily challenges they face. I'd like to tell you the story of Blaise, from DR Congo, to show the power of local people to build peace.

When he was just 13 years old, Blaise was initiatied into a militia group by his uncle, against his wishes and those of the rest of his family. He was put in charge of a battalion of 800 men and children, commanding them to fight, steal and kill.

When he was 15 years old, 30 men in his battalion were killed in a battle against another militia. Having seen such violence, Blaise realised how dangerous what he was part of was. He realised that fighting was not the way to bring peace to his community.

Leaving the militia, he knew that he wanted to help others to leave their lives of violence. He now uses his knowledge to help local organisation Centre Resolution Conflits (CRC), to help save other child and adult soldiers.

Since our last report, we've continued to help local people like Blaise to build sustainable peace. This month, our Senior Representative in the US, Bridget, was one of the keynote speakers at the Alliance for Peacebuilding Annual Conference. Bridget shared the power of local people to build peace across the world, with the United States Alliance for Peacebuilding, and an audience of experts and changemakers.

Your support helps us to keep supporting local peacebuilding organisations, and make sure they can have their voices heard on the international stage. 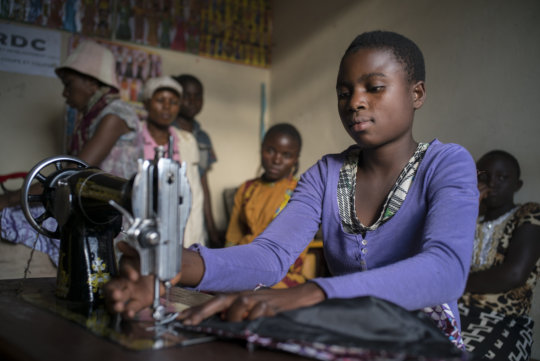 When drawn into militia life, children often witness things no child should have to witness. But thanks to your support, we are able to work with CRC to rescue children from armed groups, and help them build the peaceful futures they dream of. This is Kahindo’s story.

‘’My name is Kahindo and I’m from Butembo. It’s a large town in North Kivu province, surrounded by fields and forests.

When I was a young girl, I wanted to go to school. I loved studying, and begged by father to let me go and learn. But we were a poor family, and he didn’t have enough money to enrol me. As I grew older, I decided to try and make enough money to pay my own school fees. I started selling water and palm nuts, but I wasn’t making much and life became tougher and tougher.

As life became harder to bear, a friend suggested that I join a gang in a local village. They said I would be able to get food, and have things to do. So I sought out this gang, and I joined the militia, having lost all faith in making a living another way.

In the militia, I fought as a soldier. When I wasn’t fighting, I was at the mercy of the officers who repeatedly raped and sexually assaulted me. The pain in my heart was almost too much to bear and I thought about ending my own life.

After 5 years of terror and abuse in the bush, I overheard on the radio a broadcast about an organisation called Centre Resolution Conflits. They spoke about rescuing soldier like me, finding them a home, and helping them lead a life outside of the bush.

I realised that there was hope, that I didn’t need to end my life, and that if I returned to my community I could be happy again. With the help of CRC I left the bush and began living in the city of Halungupa. I now have a new life, new friendships, and enough money to support myself.’’

With your support, we can continue to rescue children like Kahindo, and give them a peaceful, stable future.