A new agreement between government and community

After years of denies the Peruvian government recognized the severe environmental situation in Cerro de Pasco and allocate funds for remediation.

In the last months, after several meetings between the community and the government (meetings in which the company never showed up), the central government of Peru recognized the severe situation of the city of Cerro de Pasco and decided to act with the following major points.

Source International, as always, is on the front line to guarantee the effectiveness of the agreement and will monitor any further development. 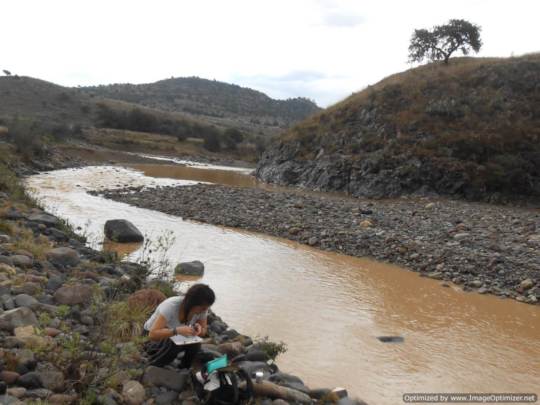 Thanks to our work that demonstrate the health effect of massive pollution in Cerro de Pasco, and thanks to the continuous pressure of the local civil society, finally the government is taking some actions to protect the health of the children of Cerro de Pasco.

Last week two children of 11 and 13 years of age, from Cerro de Pasco were urgently hospitalized in Lima for a sever intoxication by heavy metals. According to local news (here the link) the pollution date back to a spill that occurred in 2016 but because nobody cleaned the area the kids are still suffering from it.

Since the beginning of 2018 these are only the last two of more than 20 children who have received attention at a national hospital; most of them thanks to reports from Source International.

But still, this is not enough. According to our last studies there are 82 children on 82 samples who present heavy metals intoxications. This represent 100% of the analyzed children; therefore, we can assume that all the kids between 5 and 15 years in Cerro de Pasco are intoxicated with heavy metals.

Continue to support our project and we will obtain medical attention to all the kids of Cerro de Pasco! 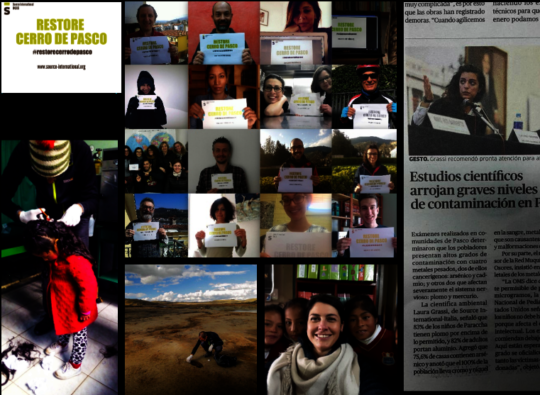 Just to remind you what has been done so far during this campaign thanks to you!

Thanks to your help and support we began in August 2016 to collect environmental data about water quality in the territory sourrounding the mining city. The lab results have highlighted high levels of polluttants, many times over the national legal limit. This happened 8 years later our first environmetal study there. In two lagoons the concentration  of heavy metals increased a lot in these years.

During the first mission we focused also on children exposition to polluttants released into the environment (air, water, sediment, food) through children hair analysis. A new methodology to assess polluttants concentration on human body along the last months of human exposition.

We have already informed you about these results. We found 21 heavy metals (components that are toxic, carcinogenic and teratogenic) in children hair, that means in their body!

* 70% children interviewed do not have drinking water in their schools

* 33% state that the water cames out yellow and turbid

With these important data of the second mission we met the Health Minister in Lima informing, toghether with local communities, the sever situation of people in Cerro de Pasco, reiterating and reminding the concern about this dramatic situation of human rights violations at the international level.

After more than 4 months, these urgent actions have not been applied totally.

We are pressing the Government to respect its responsabilites to the affected people of Cerro de Pasco and we are working with local communities to propose solutions to this huge problem.

But it requires lot of time. We will work on the case for the next 2018 hoping in your costant help to create a REAL POSITIVE IMPACT on these lives.

If you feel to go ahead with this deal,you can donate to the project.

Now it's time for the #Year-End Campaign, so your donation is free of cost of transaction and we can be matched to win 10,000 $ if we reach 50 donors until the end of December! 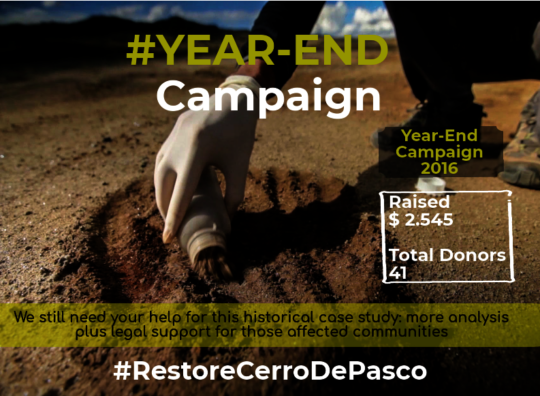