From Promotora to Manager: Escolastica's Story 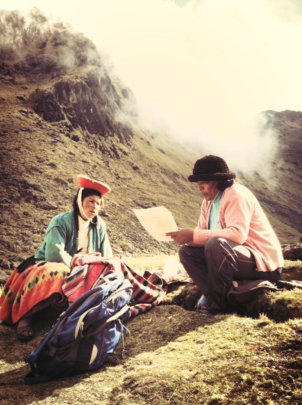 It’s 6 am and the sun has just started to rise, the morning light bathing the valley peaks and ridges in a gentle yellow hue as the doors to the Sacred Valley Health office open. In walks Escolastica, dawning her Houston Astros baseball cap and a bright pink sweater under a warm down coat. Escolastica, who was born in the high Andean community of Pampallacta, had to rise before the sun to catch the combi to bring her down into Ollantaytambo.

Rubén will be arriving soon to drive a group from the Sacred Valley Health office up to the communities of Challuacoccha and Chupani for a vitamin distribution campaign.

It's a chilly day in the Sacred Valley of Peru, and the team has plenty of blankets packed. Alli anchu, Esco says to Rubén, good morning, in the native language of Quechua. Having grown up speaking Quechua with her mother, and starting to learn Spanish at the age of ten, she is now fluent in both. The group piles in the back of Rubén’s pick up truck, and starts the long drive up to Challuacoccha.

While driving up the windy dirt road, she turns to the SVH volunteers and explains that many of the Sacred Valley Health promotoras (community health workers) have told her how empowered they feel. How SVH has given women, who often don’t have an education higher than primary school, an opportunity to be leaders in their communities.

Having been educated up to second grade, Esco easily relates to their stories. Her job prospects in this part of Peru were slim until one day in 2011 when SVH founder, Keri, knocked on her door and asked her if she would like to work as an entry-level promotora. This is where her journey with SVH began. After a year and a half of working as a promotora, she became a formal “helper” of the program. After that, she became a community coordinator, and Spanish to Quechua translator, until she was offered a full-time position as a Program Manager.

Now, Esco not only helps disseminate critical health information in her community, but she also helps run the SVH programs, teaching new generations of promotoras health education and leadership skills. She says she feels very proud to be a leader, to be somebody who is looked up to, and is of crucial assistance when someone in her community is sick or injured. In a part of the world where being financially independent as a woman is uncommon, Esco is grateful for the opportunities she has been afforded. She is happy to be in a position where she can use her experiences and knowledge to empower women from other Andean communities.

SVH is honored to be a part of her story.

For the latest SVH news and updates, be sure to follow us on social media!

The Heart of Sacred Valley Health

By Anna H - Director of Operations 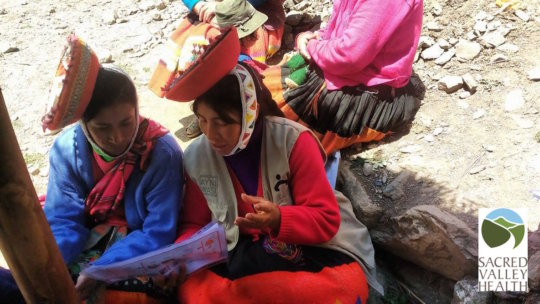 Teresa has been a community health worker with Sacred Valley Health for 4 years in the High Andean community of Huilloc. Originally elected by her community to represent them in the SVH Promotora Program, Teresa fell in love with her health promotion work. After two years of hard work, she was hired by SVH as a Docente, or trainer, to help teach new generations of community health workers. Teresa is shy, but quick to smile, and loves to talk about the opportunities afforded to her by her work with SVH.

During a recent training in the SVH office Teresa, dressed in the bright textiles typical of her community, took a moment to sit down with another staff member to discuss these opportunities.  When asked why she enjoys being a Docente, she explained “I feel like someone important, I have a higher self-esteem. For example, the promotoras who I teach, they say ‘teach us, professor!’ and I feel...happy.”

Teresa is busy. She has three young children to care for, as well as a variety of farm animals to tend to, and her husband is often away working with tourists on the nearby Inca Trail. Despite these many responsibilities, Teresa is always an enthusiastic trainer, and is eager to continue working with SVH.

“It’s the first time I’ve ever received a salary” She says, adding with a smile “That’s the truth!” In an area where there are limited economic opportunities, especially for women, the chance to earn a salary is an incredibly empowering and life changing opportunity. "For me….since it’s the first time, I feel very proud that I am earning a salary as well.”  Teresa expresses sentiments often shared by the other 5 SVH Docentes, who are all women. They are proud of their work, and their economic independence. Their devotion allows SVH to succeed.

These powerful women are the heart of Sacred Valley Health. 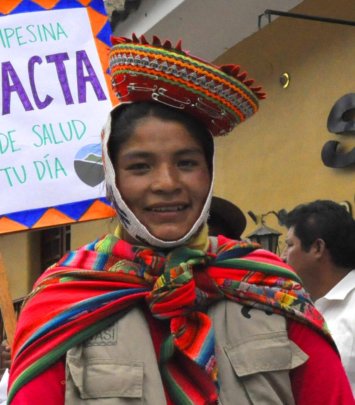 On a warm March morning, Santusa sits quietly on a bench in the Sacred Valley Health office, eating breakfast. She has already been awake for several hours. Today, she and her three-year-old son, Jordy, rose before the sun came up. Together, they traveled from their remote community of Huilloc to Ollantaytambo for the 9 o’clock docente training. As soon as she arrives, Santusa is alert, eager to review the day’s health topic.

While Santusa is soft spoken and reserved, she is always ready to help when needed. For this reason, her community elected her to serve as one of its community health workers. In this role, Santusa learns important health information and first aid through monthly trainings. As a promotora, she is highly attentive to the health needs of her friends and neighbors. “Everything I learn, I practice in my community.” She says. “I can go to [my neighbors’] houses when they are sick and help them.”

Santusa recognizes that she cannot always provide immediate solutions to all health issues. Sometimes, she has to call for additional help. “There was a young girl in my community who was fifteen years old and pregnant,” she says. “Her pregnancy went well, but because she was so young, she wasn’t ready to give birth, and there were complications. She had to go to the nearest health center, where she received more advanced care. She spent two weeks there; I went with her and was with her the entire time she gave birth. Her family was very appreciative.” She smiles. “This was a moment when I was especially happy to be a promotora.”

Santusa loves health so much that she applied to be a docente, or trainer of trainers. This past January, she was hired. As a docente, Santusa is learning how to properly train the next generations of promotoras so that they in turn can help their communities. She also has an opportunity to develop more professional and leadership skills. Being a docente allows to her exercise greater independence and implement what she has learned into practice. Although she leads a busy life, Santusa is proud to be a promotora.

“I know most of what is to know. But that means I can share it with others.” She says, “I want others to succeed.” 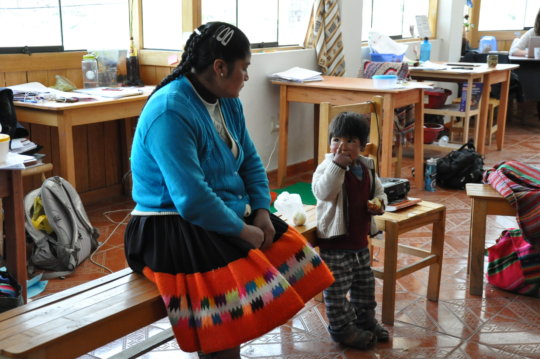 Santusa and Jordy await for the day's lesson 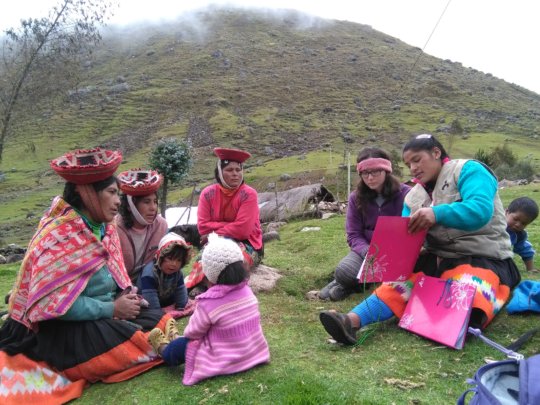 Teaching new promotoras about childhood nutrition
‹ 1 2 3 4 5 ›
WARNING: Javascript is currently disabled or is not available in your browser. GlobalGiving makes extensive use of Javascript and will not function properly with Javascript disabled. Please enable Javascript and refresh this page.