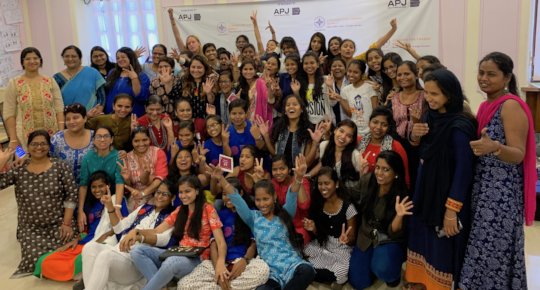 Attendees at 2019 Leaders for Change Summit

There’s a low hum in the room. At first I look around, slightly annoyed, thinking someone is having a side conversation during the speaker’s presentation. Then I realize the sound is coming from a facilitator who is simultaneously translating the current lecture from Hindi to Bengali for two of the participants. When you are hosting a conference for young women from across India who speak multiple languages, this is standard operating procedures and critical to making sure everyone is included.

This is Day 2 of Shadhika’s inaugural “Leaders for Change Summit” in Mumbai. Over the course of three and a half days, these young women will learn skills to design and develop projects to advance girls’ rights in their communities. In a country like India, which last year was named the most dangerous place to be born a girl, such efforts are essential and courageous. These young women have pledged to carry out projects in the coming year on a range of issues from child marriage, to sexual harassment and safety, to the right to education, to voting rights.

Even with the simultaneous translation, you can hear a pin drop. Everyone is completely taken in by our guest lecturer, Sharad Sharma, from World Comics Network, who is teaching us how to tell our stories through comics. “Everyone has a story. Everyone can draw. It doesn’t have to be perfect. It just has to be true.” Powerful messages for these young women who have been told for years that their opinions do not matter and who often feel their very lives only belong to their future husbands.

As the opening lecture finishes, the girls are unleashed to draw their own comics. Their focus is unwavering and the emotional release of being able to tell their story in graphic form is palpable. Language barriers fall away as their images come to life of parents, teachers, and men in their community who repeatedly serve to limit their dreams.

I stop at Shehnaz’s* table and ask her to tell me about her comic. Pointing to the first panel, she haltingly translates her story for me from Hindi to English. “The daughter says to her mom, ‘Mom, I’m first in my studies, I want to continue.’ The mother says she has to ask her father. He tells her, ‘It is enough for her. She does not need to study.’”

We move on to the third panel in her strip, showing our protagonist’s life after marriage. “Her husband is complaining to her mother-in-law that he doesn’t have enough money to support the family. ‘If your wife had studied,’ the mother-in-law accuses, ‘she could have helped us.’” Shehnaz falls silent, looking grimly at what she has drawn, the weight of her predicament laid bare on the page.

Shehnaz’s project is to work on a girl’s right to an education. Her issue is urgent in a country where 70% of girls between 6-16 are forced to dropout of school. Over the next year she will hold one on one discussions with parents in her community about the importance and benefits of educating their daughters and will actively intervene to re-enroll girls in school. Her goal is to re-enroll at least 10 girls in the coming year.

When the lecturer started this workshop, he cautioned us that there would be no drawing of superheroes in this session. When I turn to Shehnaz, I know this is not true. As she looks at me with a knowing smile, I can see the cape in her eyes.

By Lakshmi*/ Edited by Narmada - Teacher/ Staff at Shadhika

Lakshmi* comes from the Gorfa area of Kolkata. Her mother is a maid/servant and is the head of their family of three. When Lakshmi was elementary age she had to kick her father out of their home, he was a horrible alcoholic and would torture her mother and take what little money they had. After he left Lakshmi’s mother has done everything possible to give her daughters’ the best circumstances she can provide, including education.

When Lakshmi completed her class 12 she came to Uddami and began learning computers. She never realized that learning computers would be the first step in expanding her education. At the start of this learning experience Lakshmi would not even speak to anyone, and as she developed skills in computers she began to speak up more and her teacher began offering her more classes.

Lakshmi continued to work hard at developing her skills which lead to the option to take English classes as well, now not only has Lakshmi gained confidence in computers but also speaking in both Hindi and English. Her confidence lead her to ask her instructor if she could participate in the teacher training program. Lakshmi completed the teacher training program and now teaches new students computer skills.

Lakshmi uses her earnings to support her family and is grateful that her family supports her aspirations. She is now enrolled in college and is working towards a B.A. in the Arts. Her passion for education has not diminished and she is so happy to be able to share that with others and be a respected teacher in her community.

A story of Two Sisters

By A Shadhika Scholar Recipient - Student

Shadhika is committed to help me get a great job. I was the only one chosen by BSE who had not studied through prestigious English medium school. But I had attended NGO Vacha’s programme of life skills for girls. I had gone to a Municipal school for the poor and lived in a room in a slum, a hutment colony. I was about to complete an exam when I gave the first interview. BSE even waived the course fee for me.

My sister, a pharmacy graduate now, and I both received Shadhika scholarships that were inclusive of many important things including the course fee, money for travel and for dressing decently with proper clothes and shoes, coaching where needed, and we received a computer lap top of our own! We simply loved it when we could also pay for important site visits and an overnight stay. All this made a lot of difference. We felt confident. People would not point us out as slum kids. All girls receiving Shadhika scholarship were safe from the danger of early marriage. They were not a burden to the family.

Usually a scholarship just pays the college fee. Shadhika gave us actually fellowships…not just because of our good grades but also because of our active role in the community. Today I am about to complete a special course by Bombay Stock Exchange (BSE) to train in investment banking. I am fully aware that this happened because of Shadhika’s support at the crucial time when I completed high school.
Ours is a very conservative caste/ community. My sister and I are the first college graduates in it. Now my uncle, my father’s brother has also admitted his daughter to college. He no longer believes a college girl goes astray. Shadhika has remained in touch with us all through and that has kept up our morale. They also conducted a graduation ceremony of Shadhika fellows. Our parents were overcome and wept. They have made us promise that our first salaries will go towards supporting a girl in need.