Creating equal opportunities at the Lerncafes 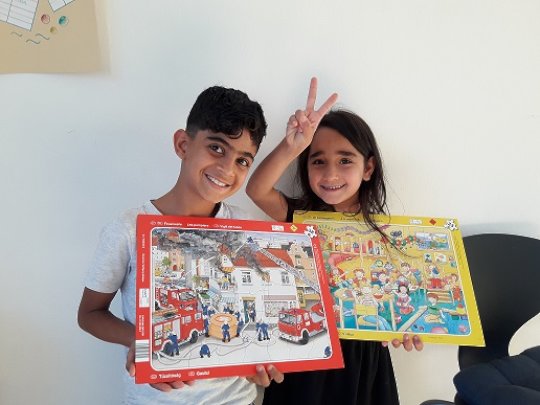 During the winter semester 2018/19 the 54 Austrian-wide Lerncafés supported 2,100 children from educationally disadvantaged families, with a special focus on migrant families. Besides the professional employees, all with a pedagogic and educational background, around 830 dedicated volunteers supported the kids in doing homework, preparing for tests or reading together in order to further improve the German language and reading skills. We are especially happy about the expected success rate of our students: We assume that about 98 % of our students attending the Lerncafés will get a positive school certificate at the end of the school year.

To give you a better insight what the support in the Lerncafés means for one specific student, we want to share an actual case study from a Lerncafé in Carinthia with you: Abdel (the beneficiary’s name was changed to protect his privacy), a 13-year-old boy from Syria, who attends the second grade in secondary school, has been coming to the Lerncafé Concordia in Klagenfurt for little more than a year now. Abdel came to Austria in 2015. First, Abdel attended the summer school at Lerncafé Concordia for six weeks in the summer of 2017. From then on he regularly visited the Lerncafé. Abdel has already been graded in the previous school year, but most of his grades were poor due to his difficulties in understanding the German language. Through the support of the dedicated Lerncafé team he was able to improve his grades at the end of last school year. In his latest school works before the semester break in February 2019 in the subjects English and math Abdel even achieved the grades “good”, whereby he only marginally missed the distinction “very good” by one point in math. Abdel is a very dedicated and highly motivated young boy who integrated himself very well into the Lerncafé Concordia as well as his school surroundings.

In Austria the official school-year ends with the end of June, so the children's well deserved summer-break is already around the corner. We wish them all the best for the final tests and exams and of course a great fun time with their friends and family! 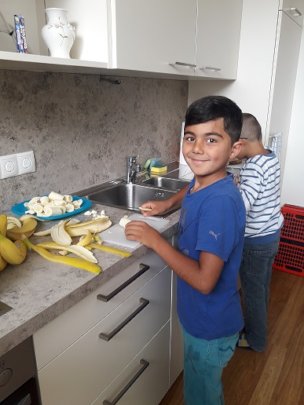 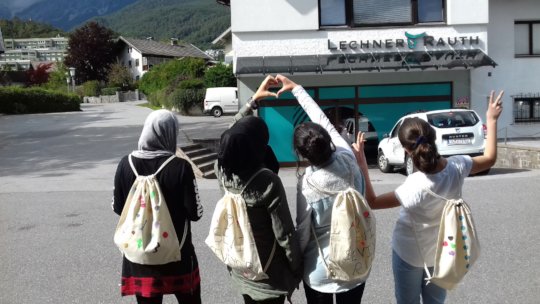 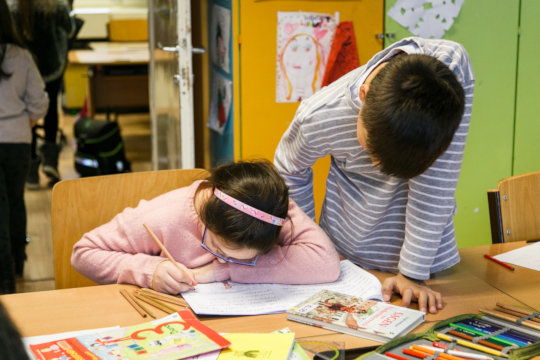 During the winter semester 2018/19 (ranging from September 2018 to January 2019) the 54 Austrian-wide Lerncafés supported 1,950 children from educationally disadvantaged families, with a special focus on migrant families. Besides the professional employees, all with a pedagogic and educational background, around 780 dedicated volunteers supported the kids in doing homework, preparing for tests or reading together in order to further improve the German language and reading skills. We are especially happy about the expected success rate of our students: We assume that about 97 % of our students attending the Lerncafés will get a positive school certificate.

To give you a better insight what the support in the Lerncafés means for one specific student, we want to share an actual case study from a Lerncafé in Burgenland with you: Zahra (the beneficiary’s name was changed to protect her privacy) is a 12 years old girl from Afghanistan and attended the fourth grade of elementary school when she first visited the Lerncafé about a year ago. She is very hardworking and inquisitive. Despite her good cognitive abilities, Zahra had considerable problems in other school subjects due to her limited understanding of the German language. As a quick solution, the team of professional pedagogues and dedicated volunteers of the Lerncafé has created individual worksheets for Zahra in German and Math. The volunteer supporting the Lerncafé-students, a retired teacher, has studied German intensively three times a week in private lessons with Zahra, with an enormous and very gratifying success. The effective solo-sessions and her own progress with the German language aroused her interest in children's books massively and she even became a member of the local city library. Zahra’s vocabulary has been steadily growing ever since. In June 2018, she has graduated from the elementary school with positive notes in both math and German and was able to move on to the next schooling level, meaning the transition to NMS (new middle school). Since September 2018 Zahra is now attending the NMS, has way fewer problems as she can better understand the schoolwork and the tasks given. In mathematics, where she was unable to solve a problem on her own a few months ago, Zahra has now successfully passed her first tests of the new middle school and will finish the current winter semester 2018/19 only with positive grades in her school certificate.

In Austria the very well deserved one week semester break is just around the corner for our Lerncafé-students. We wish them all a great fun time with their friends and family and wish them the best of luck for the next semester! 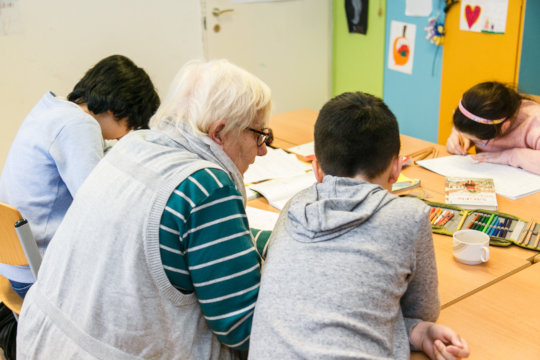 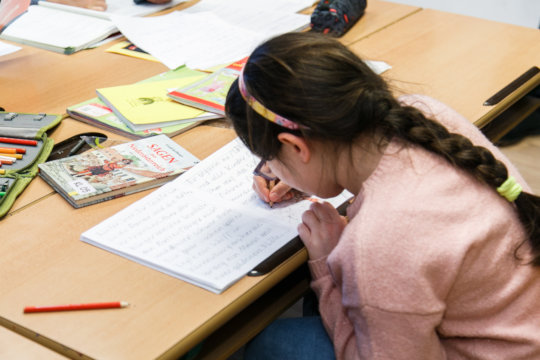 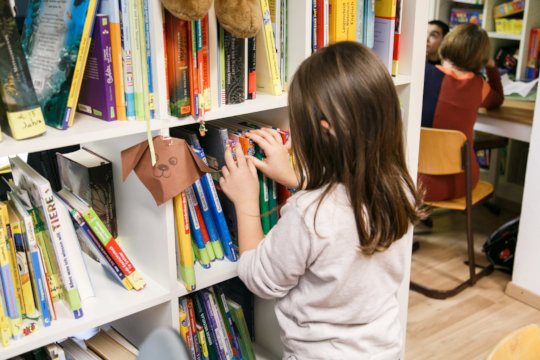 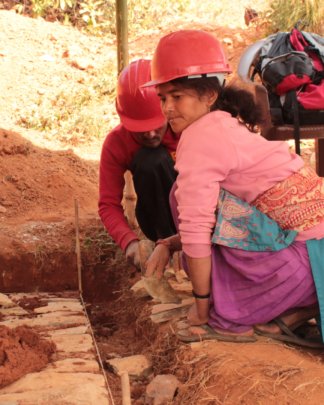 Initial situation
The two devastating earthquakes that struck Nepal on 25th April 2015 (magnitude 7.8 on Richter scale) and on 12th May 2015 (magnitude 7.3 on Richter scale), as well as a series of strong aftershocks continuing for over a month have caused severe damage and human loss. Almost eight million people, almost one third of Nepal’s population, have been impacted by these tragic events. Overall, 8.898 people have been confirmed dead, 22.309 have been injured. More than 500,000 private houses, 2,600 public buildings as well as 30,000 educational and class rooms were destroyed.

Emergency aid
After the severe earthquakes and aftershocks the emergency aid of Caritas Austria and the Caritas network on-site ran at full capacity to support the victims: 10,000 hygiene kits, 2,000 tarpaulins, 16,700 water purification tablets as well as 40,000 pieces of soap were distributed. During the first emergency relief phase – the first weeks and months after the earthquakes – Caritas Austria reached and supported up to 43,000 people with food, shelter materials, hygiene kits and medicines.

Since monsoon season approached a high priority was to provide safe shelter for those who lost their homes as a result of the earthquakes. In cooperation with Caritas Germany and with funds from the Austrian-wide donation campaign “Nachbar in Not” (neighbor in need) Caritas Austria bought and distributed 1,000 tents which among other things were used as school-tents.

In cooperation with the local organization PHASE and Caritas Nepal we also provided bundles of corrugated metal sheets forevery household in Hagam, Fulpingdanda, Kadambas, and Jalbire. This was an important support for the victims and ensured the preliminary reconstruction of those houses and buildings damaged or destroyed by the earthquake. More than 4,200 households could be aided in this way. In addition nearly 5,500 households in those areas were provided with shelter kits consisting of blankets, sleeping mats and WASH-kits (water, sanitation, and hygiene).

During winter Caritas Austria and its partners on-site distributed additional CGI-sheets, solar lights and much needed warm blankets to more than 470 households in Tauthali, Sindhupalchowk.

Long-term support
After the emergency aid the international Caritas network and all its partners are implementing much needed long-term measures including livelihood rehabilitation and support in the reconstruction of the many destroyed private houses, public and school buildings. This happens with strong involvement of the local community. Together with our partners on-site we are training the local people in rebuilding houses and class rooms in an earthquake-proof manner. This doesn’t only give them valuable skill sets for their future but also gives them the opportunity to participate in cash-for-work programs and gain money for their families.

In our aim to rehabilitate the livelihood of the people affected by the earthquake Caritas is supporting them also at the agricultural sector, providing seeds and animal feed. This support will help people to regain more independence and to be able to take care of their families’ needs.

Caritas Austria is continuing its cooperation with its local partners in Nepal for the Nepal Earthquake Response program. After the closure of the emergency response phase, the major focus of our work is to enable the communities to rebuild their lost assets and livelihoods. Still NGOs operating in Nepal are facing multiple challenges in doing their work and support those who need help.

In cooperation with its partner PHASE Caritas Austria has initiated the reconstruction of the public school in the Hagam area of Sindhupalchowk District. We are in the process of developing the master plan and designs for further approvals from the Government. Earthquake has affected the livelihood of the communities in a large manner and we are in the process of setting up livelihood programs with two of our local partners in Gorkha and Sindhupalchowk. In response to newly emerging immediate needs we are also supporting the people affected by the recent floods and landslides in various parts of Nepal. 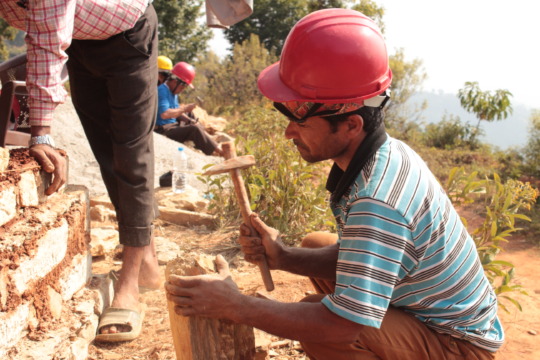