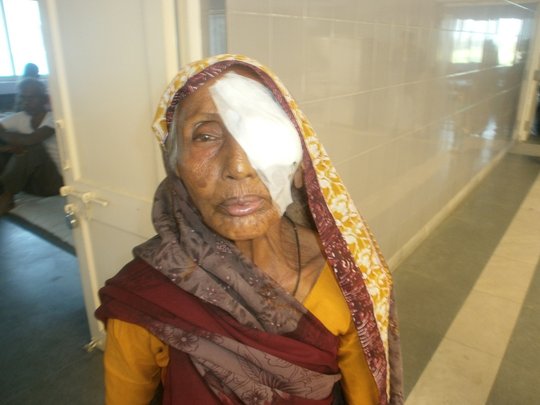 Smile on Face after Eye Surgery

Hon'ble Governor of Gujrat, Dr. Om Praksh Kohli inagurated expansion of the hospital. Two new flloors, one each on eye hospital and orthopaedic hospital have been added to the exisiing buildings. With this expansion, service spectrum of the project would be expanded.

Now, the project would be able to achieve target of conducting 15,000 eye surgeries every year.

All existing projects Catract Free Sabarkantha and Save Sight Ahmedabad continued performing well. The project has already established 3 vision cenres at 3 locations in the district.

The performance report of project is given below:

S.N Name of the procedure Number of Surgeries

During   1st of July to 2014 to 30th of September 2014 a total number of 3793 patients had undergone surgeries at Navalbhai and Hiraba eye hospital, An unit of Blind People Association, Bareja among which 3365 had undergone surgery for cataract the leading cause of blindness.

During the reporting period (1st 1st of July to 2014 to 30th of September 2014) 84 outreach programs were organized in remote locations of Gujarat where 9875 patients were provided treatment at their doorstep and among them 2140 patients were identified as cataract and 1147 undergone surgeries at Bareja hospital.

Grateful to all donors and well wishers for whole hearted support to this project. All are invited to visit the project when happen to be in Ahmedabad 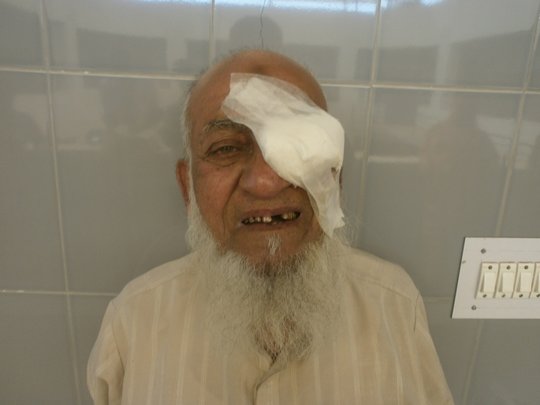 Happy once again after his surgery 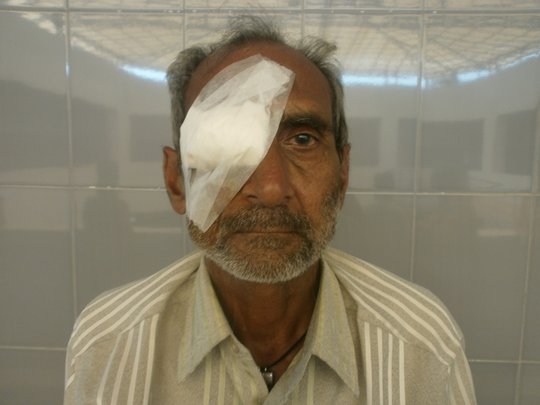 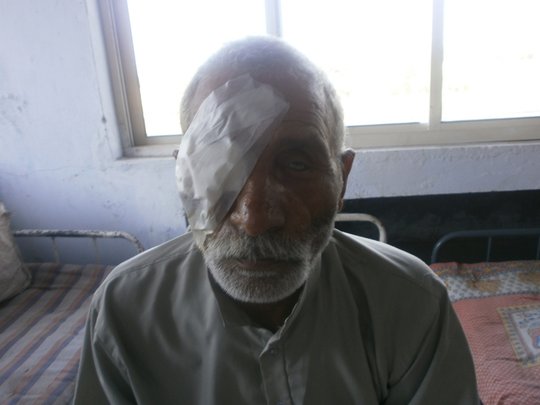 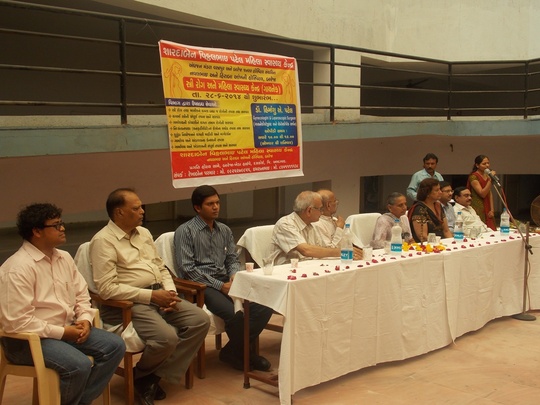 Both campaigns (1) Save Sight Ahmedabad; (2) Cataract Free Sabarkantha are making excellent progress. Some of the comments of the sponsors of CFS are given below:

"10th Week without any break, EYE Check up work is going on well in Vatrak. This facility is improving by collective postive action by BPA, Vatrak Hospital Staff and SVCT local leaders. During Sathamba Camp, we had a meeting  with local people and they were happy about the services"

"Vatrak Hospital and Blind People Association with Support from Samata Vikas Charitable Trust, will open Vision in Vatrak Hospital on 1st June'2014. Vision Centre will have facility of EYE Check up , Glasses for near sight correction and patients having cataract will be taken to Bareja Hospital for surgery and bring them back to Vatrak.
This will help to reduce backlog of Cataract related eye correction in the area . Vatrak Hospital will send Mobile Van in nearby areas to educate rural people for eye check up and other facilities available at the site.

BPA has understood the need for extending such facility in area and they are putting fa Vision Centre  in Vatrak Hospital . This initiative is also a part of 50th Year - Golden Jubilee years of Vatrak Hospital."

"We feel blessed that we have family that cares for less privileged in the society. The first camp in Sathamba was supported by my sister, daughter/ son-in law and son/ daughter in law. The second camp was supported by my son and daughter-in law. At a minimum my family will continue to support at least one eye camp every year for next few years.

All the credit should go to BPA which provided us a platform to help needy in our birth place and for running an excellent. financially transparent organization."

3. Comments of  residence of Gabat, a great supporter and moitivator of CFS Campaign

"Over the past four years, SVCT has made substantial progress in partnership with BPA towards our goal of promoting Cataract-free Sabarkantha, and we have an unique opportunity to take a significant new step to expand BPA’s services to help eye patients even further."

4. Comments of  moving spirit behind the CFS Campaign

"We are all happy to learn people's interest in Vatrak and eye center for our brothers and sisters of that area. We are there to support and serve. Your contribution will add a needed dimension to thhis campaign."

The statistical report of performance of the project during the last 3 months is given below:

S.N   Name of the procedure  Number of Surgeries

During  the period, April to June, 2014 a total number of 3654 patients had undergone surgery at Eye Hospital, a unit of Blind People Association, Bareja. During this period, outeach programs were organized in remote locations of Gujarat where 7895 patients were provided treatment at their doorstep and out of them 1856 patients were identified as those with cataract and 1008 have undergone surgeries at Bareja hospital.

The Chairpersons of Heart Foundation & Research Institute continued supporting the pathology, general OPD and meal services at the hospital. The Government of Gujarat also came forward to extend support to the hospital through District Blindness Control Society under the National Program on Control of Blindness.

BREAKING NEWS: The concept of establishing Vision Centres all across Sabarkantha & Aravali Districts makes further progress. The Annpurna Trust of Modasa, district head quarter of Aravali District has decided to invite Bareja Eye Hsopital to establish a well equipped Vision Centre at Modasa. This Centre will be inagurated on 14th September, the All India Flag Day for the Blind at Modasa. 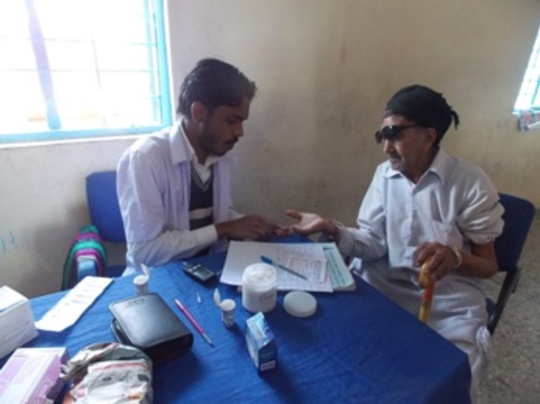 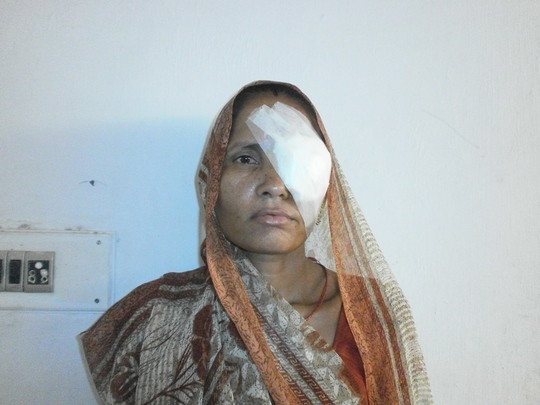 Neeruben can the world her around her again 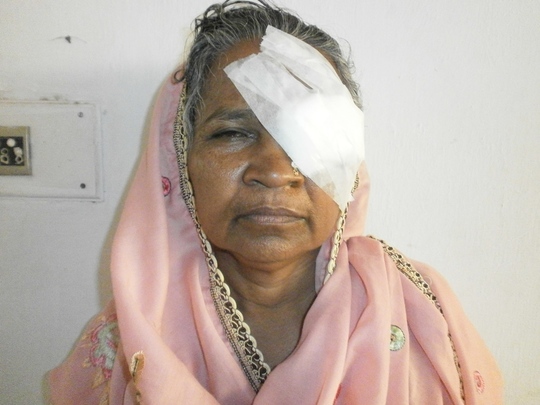 Fardiaben is full of joy after eye surgery 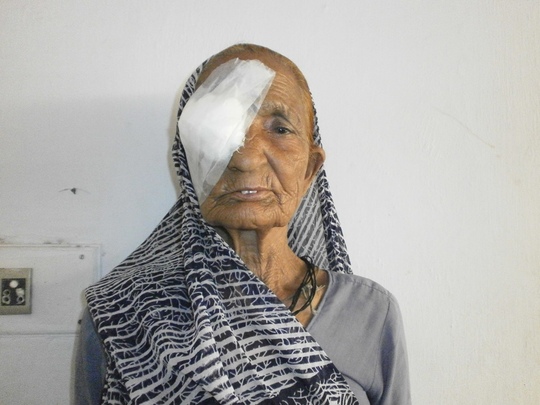 Salmaben is now the happiest person 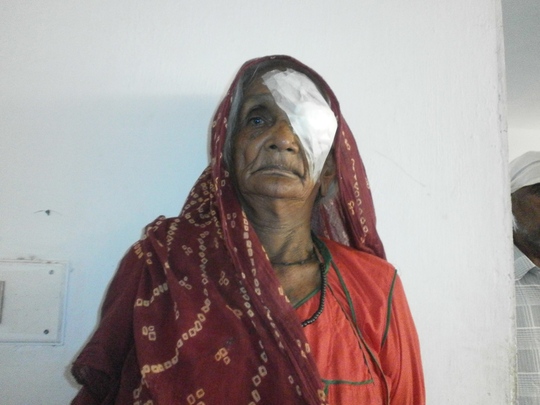 Paniben thanks all the donors for her support
May 14, 2014 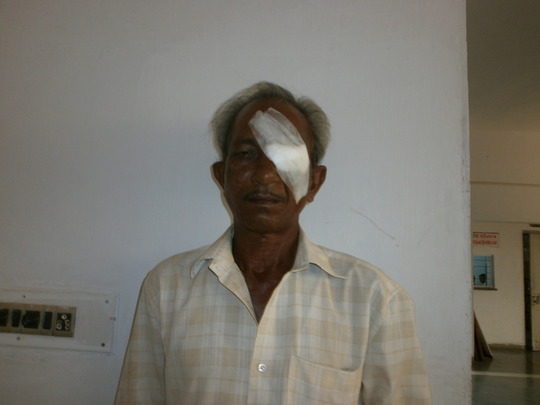 Landmark Achievement: The Project went for a mega expansion of its geographical coverage by establishing 3 Vision Centers.

1.  Vision Centre 1 at Varsoda The Trustees of Varundavan Dham, Varsoda approached the hospital to establish a Vision Centre at Varsoda, Varsoda – Badpuda Road near Mahudi. Thanks to efforts of Mr. Kanjibhai Chaudhary, Chairperson of the Vikas Trust that this centre Vision Centre has been established 85 Kms. away from the hospital. It will provide health care services to the patients from Mansa Taluka of district Gandhinagar.

2. Vision Centre 2 at Delhi Darwaja, Ahmedabad: This Vision Centre has been established in the Laskari General Hospital, Delhi Darwana, near Dariapur. This Centre has been established with the support of Mr. Bhanubhai, a leading philanthropist who also runs the company that produces Omani Inter-ocular Lense. Laskari hospital was established almost 100 years before to cater to the health needs of poor patients from the walled city area of Ahmedabad. As lot of patients coming to this hospital has eye ailments, the Trustees of the Hospital approached the project to establish this vision centre.

3. Vision Centre 3: Vatrak: As reported earlier, the project and the Samata Vikas Charitable Trust (SVCT) have taken challenge of rendering Sabarkantha District as a Cataract Free District. To expedite the process further and achieve this target, The SVCT has decided to establish the SVCT VISION CENTER at the Shri K K SHAH Sabarkantha Arogaya Mandal , Vatrak with effect from 1st June, 2014. The Project will receive support from local community of Sabarkantha District and Non-Resident Indian settles in the USA. Mr. Ramesh Shah, Mr. Rasik Shah and Mr. Vijay Shah, all from district of Sabarkantha are coordinating the work. Mr. P K Lahiri, Ex-Chief Secretary of Government of Gujarat and now the Chairperson of Vatrak Hospital has extended his full support to this initiative.

S.N   Name of the procedure    Number of Surgeries

During   January 2014 to March 2014 a total number of 2821 (including 2487 for cataract surgeries) patients were operated at the eye hospital, a unit of Blind People Association, Bareja.  During this period, 51 outreach programs were organized in remote locations of Gujarat where 5483 patients were provided treatment at their doorstep and out of them 1742 patients were identified as having cataract and 970 had undergone surgeries at Bareja hospital. 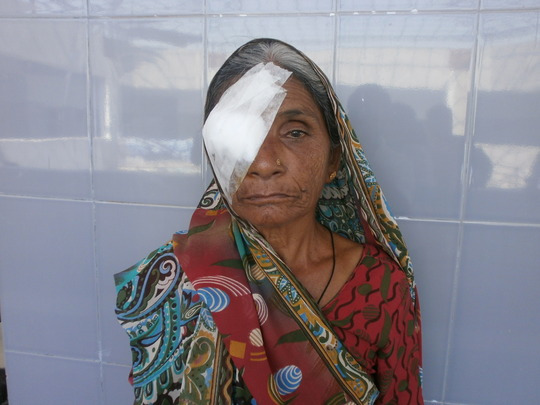 Galiben is the happiest person after eye surgery 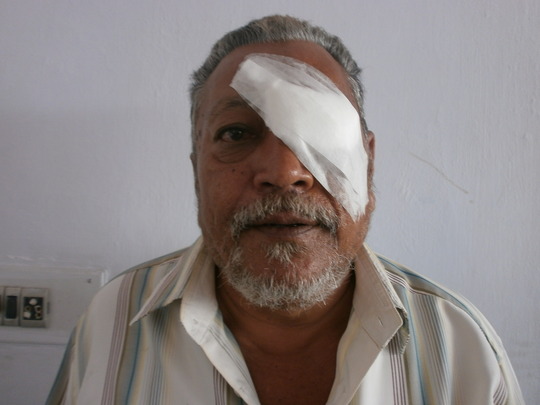 Yusufbhai can see the world clearly after surgery 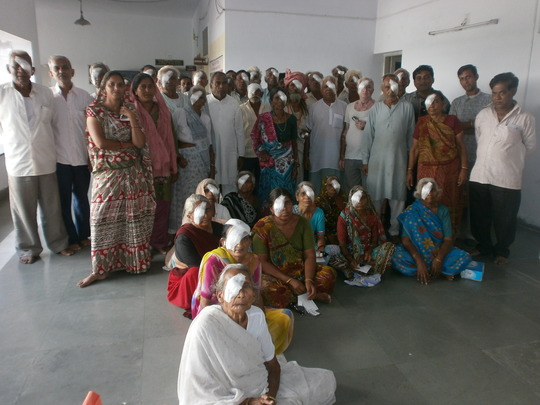 Another eye camp in progress 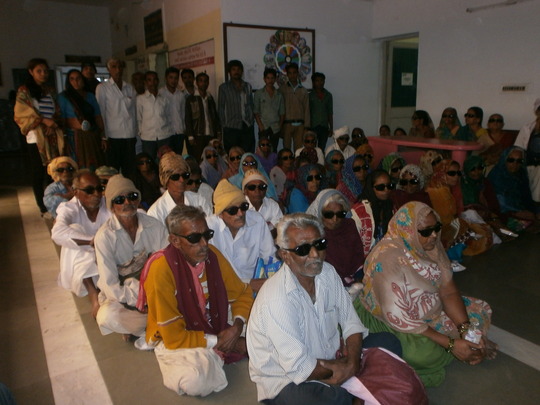 Another camp in progress
‹ 1 ... 13 14 15 16 17 18 19 20 21 ›
WARNING: Javascript is currently disabled or is not available in your browser. GlobalGiving makes extensive use of Javascript and will not function properly with Javascript disabled. Please enable Javascript and refresh this page.