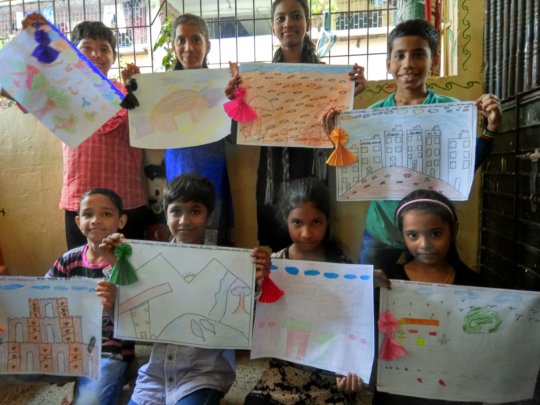 On 15th August 2017, India celebrated its 71st Independence Day. But the children in Lallubhai Compound questioned the very idea of freedom. On daily basis children face violations of their right to freedom due to unsafe surroundings and the insecurities arising from it.  Children do not have the freedom to play in the open spaces because most of these spaces are occupied by people engaging in substance abuse. In the name of maintaining discipline they are also stopped from playing in their houses, corridors and the society office that most of the times are kept locked.

With an objective to create “My Community Safe Community” the children stepped outside Community Resource Centre and claimed society office in their respective buildings. This opportunity was taken to inculcate the practise of allowing children to use society office, a space that is meant for all people living in the building, a sense of leadership and responsibility was inculcated among the group leaders by making them responsible for planning and executing the activities. Not only were the children taking responsibility of the activities, Community Child Protection Committee members and society members oversaw the entire process.

The group leaders took various activities like drawing, indoor games and outdoor activities. These activities were followed by a discussion on whether children have access to their rights after 70 years of Independence. The activity was carried out by 8 different groups with ten members each. They defined freedom for themselves as access to playground, freedom to roam around in the community without the feeling of insecurity and freedom to express their opinion. The children also discussed to take up activities to ensure these freedoms. 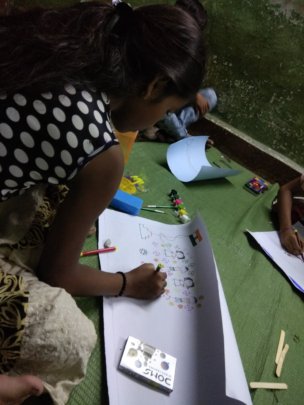 CHILD RESOURCE CENTRE- (Oorja Sharma was interning with YUVA. she had to say about her experience) 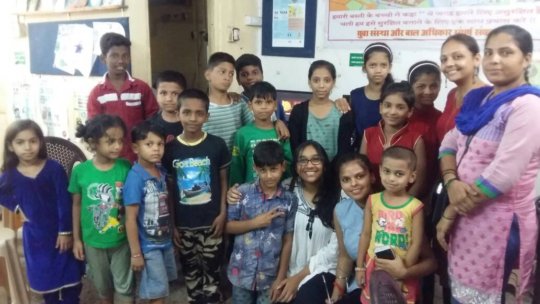 Recently, I joined an NGO named YUVA (Youth for Unity and Voluntary Action) as an intern. Being in the second year of my Bachelors in management studies, I originally joined here because I needed work experience for my resume. YUVA has a lot of child resource centres (CRCs) located in various parts of Mumbai and actively works for the child rights. Lately I was given a responsibility to take an interview of the staff working for the CRC located in Lallubhai compound, one of the large slums in Mankhurd.

The questions that I asked were related to the work that the staff had been doing, the facilities that they were providing the children, the difficulties that they faced and the change that they made. One of the most important topic was about the reason why the kids and especially girls of Lallubhai compound needed help and development.

The information and response that I got was a true eye opener and I could actually see the dark reality behind the glamourous and happening life of Mumbai. Me along with another intern, spent some time with children over there, talked to them and clicked pictures and selfies. It was surprising to know how intelligent these kids were but had lack of resources and a good lifestyle. There was absolutely no safety for the kids, especially girls who didn’t step out of the house after noon. We could see how difficult their lives were, but were still happier than most of the rich families. The kids loved coming to the CRC as they could learn more, spend time with their friends and most of all, because they felt safe and were given a large amount of freedom. We came to know a lot more about the problems of the children’s households and daily life problems. It was a really good initiative from YUVA’s side as helping the kids and the people was not an easy task and had a lot of challenges. After the interview, we became aware of all the provisions and activities that YUVA had been undertaking and they had actually made a huge impact.

Before that day, all I knew about Mumbai was the tall buildings and luxury. I did have some idea about the slums and the problems that the lower section of the society faced, but I never thought that I would get to see the harsh reality so closely and I’m thankful to YUVA for giving me this opportunity and letting me explore the inside of the city that I’ve been living in, since 12 years of my life. So yes, I had originally joined here because I needed work experience, but I have got to learn a lot more than I expected and this is the most insightful experience of my life. 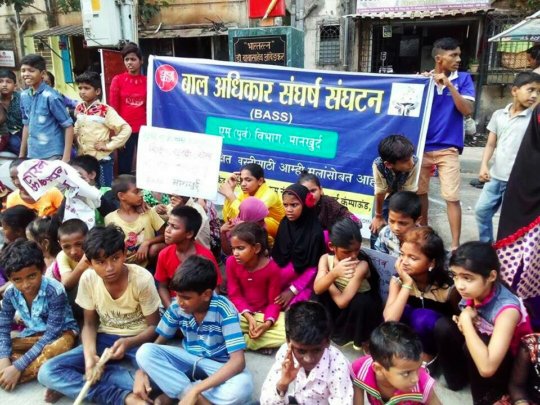 The Safe Communities for Children in Rehabilitation and Resettlement Sites, Lallu Bhai Compound, YUVA organised a ‘Child Friendly’ summer camp from 13th May 2017 to 19th May 2017 with an objective of creating a ‘With the Children for a Safe and Violence Free Community’.

The summer camp was inaugurated on 13th May by Mr.  Dattatray Shinde, Senior Inspector of Police at Deonar Police Station. Later the children organized a rally throughout Lallubhai Compound, giving slogans of bal Shakti ai hai nai roshni ai hai. The rally concluded in a street play on Child Labour performed by the Childline team of YUVA.

Focusing on the taboo in talking about gender issues in the community, day two of the camp organised two activities; ‘Maa-Beti Milan’ and screening of the Documentary Zor se bol that was followed by discussion on eve-teasing. Through dance movement therapy facilitated by Ms. Ayushi Chaturvedi, Maa-Beti Milan aimed at initiating dialogue between mothers and daughters. Simultaneously, with the boys, discussion was initiated on eve teasing through the movie ‘Jor se bol’.

Introducing puppet show as a medium of communicating with the mass, ‘Puppet-making ’ was the theme of the day. Mr. Ravindra Pedanekar, taught the students to make puppets. At the end of the session, children decided to perform a puppet show using the puppets they made that day at the end of the camp.

Apart from words written or spoken, art can also be a great way to express oneself and at the same time a recreational activity. ‘Drawing Festival’ was organized with the same objective on  17th May 2017. The same method was used to bring out the feelings of the kids and make them express whatever they feel about the society they live in and the ways in which they would contribute to the creation of such a community.

With an objective of team building and coordination within the existing BASS groups, outdoor games like cricket, kho-kho were organised for the children. Post lunch session  was a on gender sex and manhood that was facilitated by Ms. Deepa Pawar. Both girls and boys spoke their minds about the myths around gender roles and patriarchy in the society that not only restricts the female but also imposes certain mandatory behavioural attributes for males.

The same day, a craft making session was facilitated by Childline associate Mrs. Anita. She taught the kids to make a piggy bank with balloon and paper. Last activity for the day was a session on Judo techniques for self defence which was facilitated by Ms. Nidhi and Mrs. Neha.

The summer camp concluded with cultural program hosted by BASS coordinators Saurabh and Jyoti. Mrs. Samruddhi Kante, honourable Nagarsevak of ward  146 and ex- chairman of M. Purva Vibhag along with the Police Inspector Mr. Chandekar attended the event as Chief Guest. The children coloured the evening with dance, music, puppet show, play and poetries, each one to spread a message. 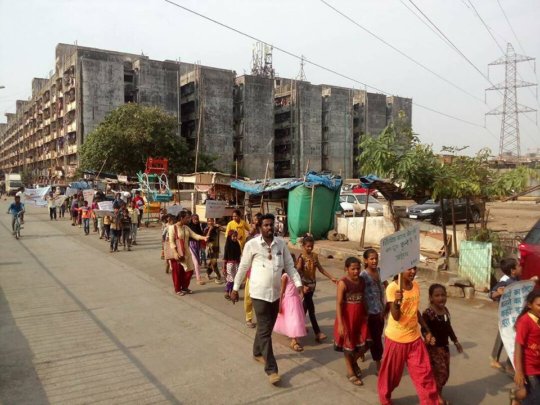 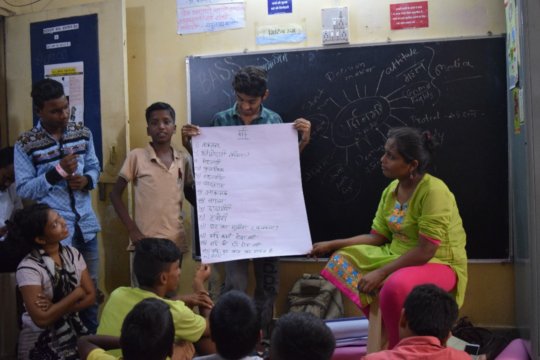 Workshop on gender and patriarchy 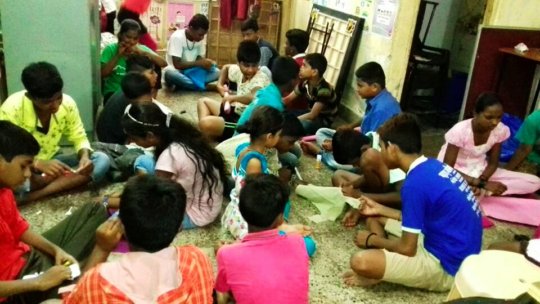 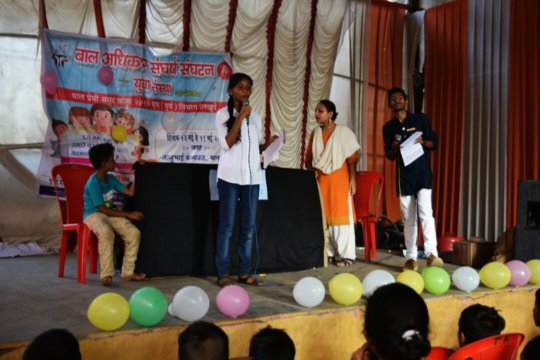 The cultural program
‹ 1 ... 4 5 6 7 8 9 10 11 12 ›
WARNING: Javascript is currently disabled or is not available in your browser. GlobalGiving makes extensive use of Javascript and will not function properly with Javascript disabled. Please enable Javascript and refresh this page.