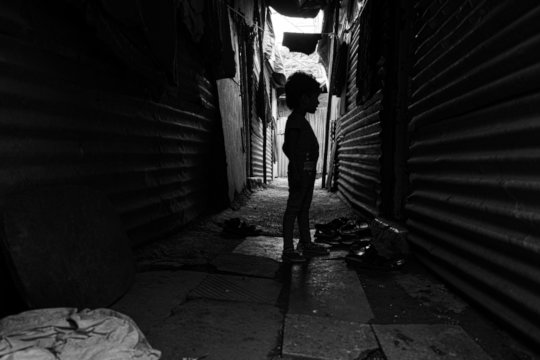 Nobody would question why special rights are conferred to children. Children are not just ‘adults-in-the-making’ but are young human beings. They have the same rights to dignity, equality and physical integrity as adults. However, children are born as entirely dependent on human beings and only become independent over time. Protection of their human rights, therefore, requires more extensive measures as well as special attention.

So far, so obvious; it is probably for the plausibility of these considerations, that the United Nations’ Convention on the Rights of the Child succeeded as a legally binding entity nearly all over the world. The Convention’s main principles are to guarantee rights to protection, special care, participation and non-discrimination to children and to make their best interests a primary consideration. Each state is obligated to regularly send reports about their progress in implementing the Convention to a UN Committee, which publicly reviews them, thereby drawing attention to the topic. In December 2019, we celebrate the 30th anniversary of this Convention, the most widely ratified human rights treaty in history. Its international impulse led to further national measures with many states implementing provisions regarding child rights. As for India, the Constitution already emphasises that the State shall direct its policy towards protecting childhood and giving children opportunities to develop.

Despite all these formal guarantees on child rights, inappropriate treatments and dangers still shape the reality of vast numbers of children, on the global as well as national level in India.

Adequate health and nutrition continue to be primary concerns hindering the development of children. Although the mortality of under-5-year-olds decreased by almost 50 per cent in the last 18 years, more than 5.3 million (53 lakh) children died in 2018 before reaching the age of 5. Undernutrition and malnutrition contribute to these numbers and are in any case likely to have lasting effects by harming cognitive and physical development of children.

Another major issue that prevails at a global level are the various instances of child labour: Of the 218 million working children (21.8 crore), 152 million (15.2 crore) are affected, i.e. the work interferes with their education or is harmful to their health and overall development. In India, more than 10 million children work even though they have not even reached the general minimum working age of 15 years (data of 2011 Census). The worst forms of child labour worldwide include slavery, child trafficking, child prostitution or pornography and children forced to conduct illicit activities like drug trafficking or highly dangerous work like mining and quarrying (Art. 3 of C182 — Worst Forms of Child Labour Convention).

The list of threats is far from comprehensive. All these issues directly violate the children’s rights to development and education, in severe cases even their rights to life and survival.

In India, home to almost 20 per cent of the world’s child population, this divergence of formal status and realisation of child rights is well-known.

Indian governments have undertaken legal measures in the past years to improve the children’s situation, for example, with the installation of a National Commission for the Protection of Child Rights and corresponding state commissions starting from 2007, the introduction of the Protection of Children from Sexual Offences Act (2012), the amendment of the Child and Adolescent Labour Act, prohibiting economic employment of children under 14 years etc.

However, violations of child rights are strongly linked to larger, interconnected issues in the society and thus cannot be effectively tackled in an isolated manner. Many political issues and many (often implicit) decisions on how we have shaped and continue to shape our society, include child rights aspects and heavily affect them. This becomes hardly as visible as, for instance, cases of discrimination of the girl child (e.g. abortions, neglect, lack of education due to household chores etc.), linked to the lack of opportunities for women in Indian societies.

It is important to note that tackling simply the increasing numbers of sex-selective abortions by prohibiting prenatal sex determination, does not change the girl’s, let alone women’s role in society. Responding to the abandoning of children with more severe penalties will hardly ever motivate struggling parents to provide parental care. Such governmental measures aiming at ensuring child rights in a particular situation, might be helpful to mitigate present threats and to state society’s expectations symbolically. The structural problem will however continue to reoccur, as long as the underlying thinking and behavioural patterns persist. Challenging the latter requires serious, persisting efforts not only from the government, but also from us as a society. It means to no longer focus on easing primary, visible harm to children only, but to consider children’s best interests when making decision on non-child-specific policy fields as well (e.g. on housing or development issues) and to dare to substantially treat the fundamental causes threatening child rights: poverty and an exclusive, unequal society.

As the change of perspective on child rights on a larger scale as well as effective laws consolidating it are yet to come, it continues to be critical for us to systematically fight for children’s protection. YUVA therefore works towards furthering child protection and child participation in the society. Regarding child protection, YUVA supports the formation of Child Protection Committees, a government-mandated body that needs to be set up, resulting from the Government Resolution passed by the Maharashtra State government on 10 June 2014.

The topic of child rights must not be limited to the goal of protection though: Children do not enjoy the same rights to participation in our society as adults, when it comes to voting etc. A child however is not a premature adult to be developed by the parents, until maturity grants them affiliation to our society. On the contrary, the denial of equal participation rights with regard to voting, party membership etc. makes the involvement of children in other formats even more crucial, as it is necessary to compensate (or at least mitigate) their lack of representation.

The UN’s Convention of the Rights of the Child confers on children the right to participate in decision-making especially those concerning them and recalls their human rights to freedom of expression, association and assembly. Children constitute a population group with specific needs, which need to be considered. The best way to identify and prioritise those is to let the children speak for themselves, whenever possible. Therefore, they need to organise as other population groups do, in order to articulate and advocate their interests in public.

YUVA facilitated the creation of Bal Adhikar Sangharsh Sangathan (BASS) (check page 5 of the hyperlinked document) in 2002, a children’s collective led and run by children. BASS encourages the formation of children’s groups from marginalised communities. They represent children’s opinions on different policies and approach various governmental actors and non-governmental entities to communicate about the same. The work focuses on child rights issues but may extend to all topics that affect a community and the children within it.

Participation in BASS incidentally constitutes an empowering experience for most of the children, as they get to know the feeling of being heard, of their concerns taken seriously, of being more than a mere resident but a member of their community. Furthermore, the collective creates an incentive for the children to improve their own understanding and knowledge of child rights.

It is not only every child’s individual right to participate and to be heard. Only a generation of children who experience being respected and participate actively in society will be sufficiently confident, resilient and trusting to believe in and practice the principles of non-discrimination, rule of law, democracy and non-violence, ultimately forming a truly integrative society. 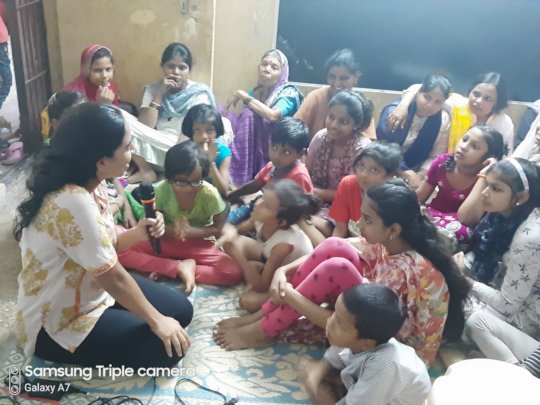 The mental health of children

Lallubhai Compound, Mankhurd, has witnessed a high incidence of suicide and other cases of mental health among the younger demographic. Continued displacement from habitat, lack of basic facilities, neglect due to family disputes and single parenting are some of the issues that have contributed to it.

To that effect, screening the Marathi film Killa was an attempt towards creating safe familial spaces for children in the city. The film initiated a dialogue between children and parents of the resettlement colony on developing a healthy relationship.

The children in the audience shared how they related to the fear of exams, the bond of friendship, and the excitement with respect to the opposite gender, among other things shown in the film.

They identified with the 11-year-old protagonist’s struggle to cope with his father’s death and mother’s subsequent job transfer. And spoke about the role of friends in life, the loneliness after shifting to a new place, and the struggle of making new friends.

“Life is nothing without friends. But it takes a healthy environment to yield good friendships. It is important for children to realize that such bonds can also be developed with family members,” a woman said. “The child in the film was very clear-headed. He understood his mother’s tensions at work and accepted her job transfers with patience.”

Another parent conceded that “we also face tensions at work and we often vent it out on our children.” She added that “it is important that parents responsibly spend time with children so they don’t feel neglected and alienated.”

The children understood the importance of a good relationship between parents and children. And held that both sides need to develop an attitude of understanding for the same. 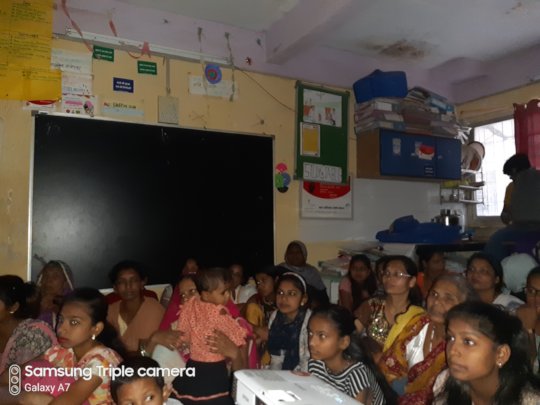 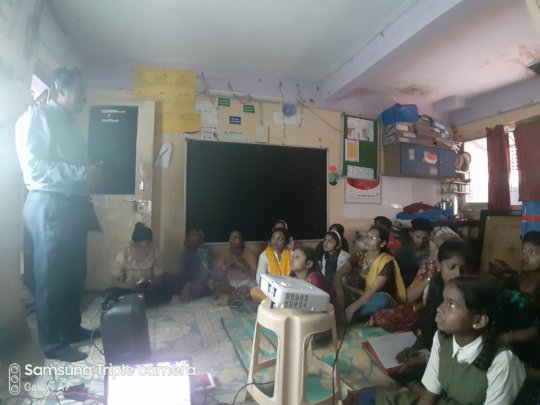 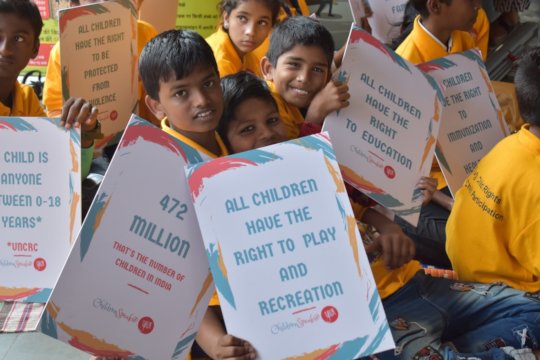 The children in the caravan in collaboration with Railway Childline rallied on the railway station and performed a short street play and were addressed by the senior authorities of the Railway force, distributing pamphlets and brochures on child rights awareness. This event was organised with the support of other civil society organisations, NGOs, Childline and Railway authorities.

Around 10-12 authorities and railway police present.

Reach out to more than 500 people at the railway station. 400 brochures and bookmarks were distributed.

Station Director - Kakde sir, station manager - Panda Sir shared that it is very important to provide safe environment for children. On station with the help of CHILDLINE, they are trying to make the station child-friendly.

They also appreciated the efforts that YUVA is taking for spreading awareness about Child Rights and ensuring their participation in it.

Street play begins with the title. Where BASS children showcase that how at various places be it home, locality, factories children are not safe and are denied of their basic rights to:

Through the play, it was narrated that at factories they are hired though there are strict rules to prohibit them from working if they are below 18 and fall between 14 to 18 years but in these places, they’re made to work as the labor cost of hiring children is comparatively lesser. Also, at home, they are not safe and are at constant threat and danger of exploitation from their own family members and relatives. At times even when we know that something wrong has happened to the child, we remain silent to not escalate the issue in fear but it actually enforces the perpetrators of such heinous acts. In our society girls are still looked down when it comes to education and are expected to stay inside and do learn and do household chores and be marriage ready instead of aspiring for a better career with the pursuance of education.

In the end, everyone took an oath to safeguard and promote these minimum basic rights and practice meaningful participation at every space and approach authorities who are working towards promoting these interests of children like- Police, YUVA, ChildLine, BASS, etc. in case any problem arises.

One of the Passengers at Dadar station after witnessing the street play stated and accepted the importance of awareness generation of the rights of children. And appreciated that though in some way it’s been done and like the efforts of the team.  He said he could relate this as he has a younger sister at home. 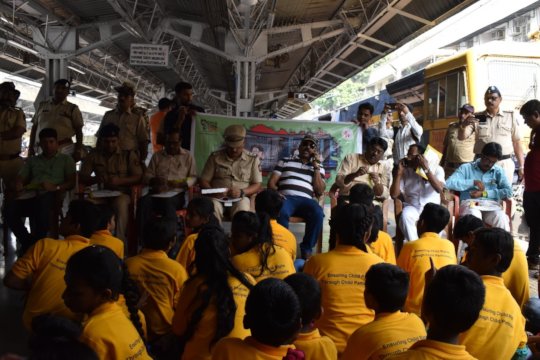 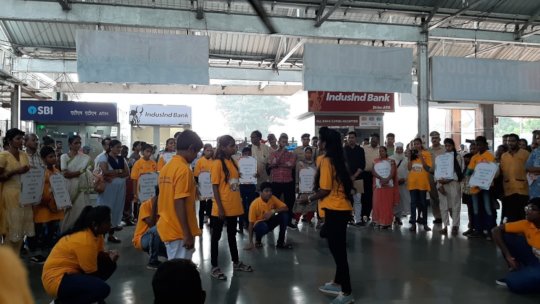 Street Play at Railway station
‹ 1 2 3 4 5 6 7 8 9 ... 13 ›
WARNING: Javascript is currently disabled or is not available in your browser. GlobalGiving makes extensive use of Javascript and will not function properly with Javascript disabled. Please enable Javascript and refresh this page.