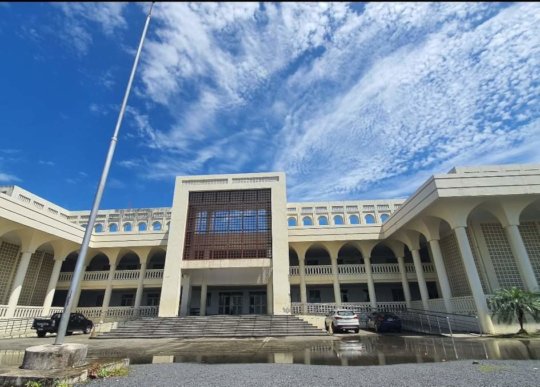 Over the past six months, in addition to creating partnerships and conducting the research necessary to scale the TrackGBV program to the Caribbean, we’ve been working on a training program for TrackGBV. We’re very excited to share that this month, we’ll begin our TrackGBV Train-the-Trainers program in Samoa with representatives from the Ministry of Justice, the Ministry for Women, Community, and Social Development, and the Office of the Ombudsman and Samoa's National Human Rights Institution. We’ll be meeting virtually for seven weeks to prepare the cohort to train other key stakeholders in Samoa.

We’re also thrilled to share that GlobalGiving’s Project of the Month Club selected TrackGBV from a pool of more than 5,000 nonprofit projects in 170+ countries as their Project of the Month. The program will award $10,000 to ICAAD, and over the next 11 months, we will receive an additional portion of funds the Club raises. We also received a grant from the Airbnb + GlobalGiving Community Fund. The program invited Airbnb hosts to help decide how to distribute the Community Fund to GlobalGiving projects, and TrackGBV was one of their picks.

We will also be launching the TrackGBV Dashboard on Thursday, November 25th which is the first day of this year’s 16 Days of Activism Against Gender-based Violence. We currently have 20 years of case law analysis for Samoa, Fiji, and Papua New Guinea in the dashboard and will be uploading the profiles for Kiribati, Solomon Islands, Tonga, Tuvalu, and Vanuatu over the next two months. We are also connecting with advocates across the region who will be using the Dashboard including:

The TrackGBV Dashboard will be used by women’s rights advocates and judiciaries to understand gender discrimination and other variables like victim anonymity and the use of medical reports in GBV sentencing decisions. Over the past few months, we have been getting feedback from key stakeholders to refine the Dashboard to better serve advocates pushing for change.

Stay tuned for an invitation to our virtual launch event on November 25th!

Inviting the Next Cohort of Artivists-in-Residence 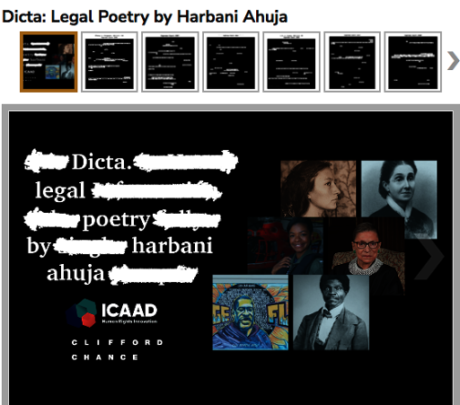 We have many exciting updates to share around the Artivism program and ICAAD's release of Dicta, Artivist-in-Residence Harbani Kaur Ahuja's new exhibition.

The first 10 poems of Dicta received an excellent reception through their release via the ABA Journal over the past three months. The ABA Journal is one of the most widely read legal publications in the U.S. and in addition to the release of the gallery, an article was published on Harbani and her work.

Harbani was also featured on the Legal Talk Today Podcast. Listen to Harbani’s interview with Laurence Colletti; she reads LA v. Lyons and shares what the piece means to her and her process in creating Dicta. Click here to listen.

Harbani was also interviewed for Law360 Pulse. In the article, you can read about how poetry influences her work as an attorney and get a preview of one of the poems from the next Women's Rights series: Walmart v. Dukes. Check it out here.

We also have four blogs inspired by Dicta that were published over the past three months. One, written by two Masters students at Columbia University focuses on Racial Equity in NYC Public Schools.

The second and third articles are a two-part series entitled "Police Cannot Police Themselves." And the fourth is a case study on the Supreme Court's impact in relation to a case on racial justice in employment law. You can read those four blogs on ICAAD's Ideas blog.

What's on the horizon for Dicta?

We have partnered with Y’all, a creative design firm, to develop and launch an immersive virtual exhibit for Dicta on International Human Rights Day, December 10th. Mark your calendars and stay tuned for the rollout of the Women’s Rights Dicta series.

We've also opened a call for applications to invite the next cohort of Artivists-in-Residence.

With your support, we’ll be able to bring on more artivists next year and launch even more exhibits that educate people on human rights and inspire them to activism by moving them from the heart. 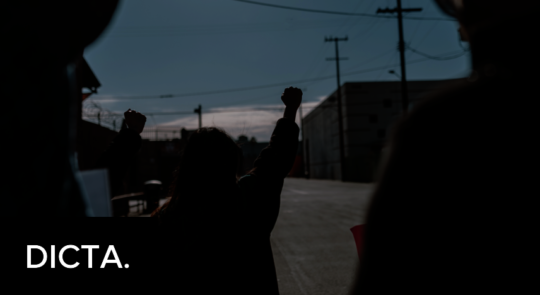 Dicta Launch in the ABA Journal 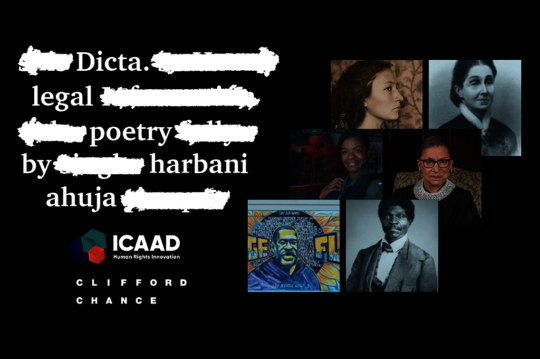 Thanks to your support, we are launching Harbani’s first ten poems from the Rights of Black People series in the ABA Journal. One poem will be released each week through August. The first two poems are live now: Plessy v. Ferguson and Loving v. Virginia. We will also be sharing excerpts of each poem on social media under #DictaLegalPoetry and on our Twitter, Instagram, Facebook, and LinkedIn. We hope you enjoy the series and that it serves as a reminder of the timelessness of the struggle for human and civil rights in the United States.

Harbani created two versions of Plessy v. Ferguson, one of which we have not released publicly. You can get a copy of the unreleased version here.

Over the next year, Harbani will continue creating poems to complete a 40 poem series along the themes of Women’s Rights, Rights of Black People, LGBTQI+ Rights, Immigration Rights, and Indigenous Rights. The next release in the series will be the virtual exhibition of all the poems. We can’t wait to share it with you!