The Board Game - Instructions 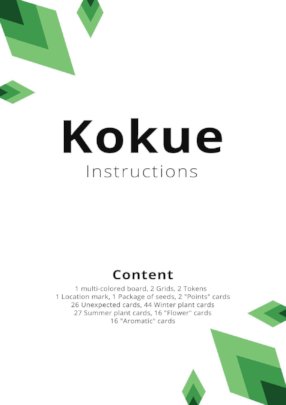 The challenge of KOKUE is to combine, in the most efficient way possible, the arrangement of plants in a limited space, thus learning how a 1m² garden can be realized in real life.

The game can be played between 2 people or two teams: each one takes a grid.

The game is divided into two matches: a winter version and a summer version. The player/team that collects more points in both matches will be the winner.

Arrange all the cards of the winter or summer plants (depending on the color of the cover) in a circle around the multi-colored board and position the location mark between two cards.

Place 4 "aromatic" cards, 4 "flower" cards and 8 seeds at random on different squares on the multi-colored board.

Before starting, each player will take 6 “aromatic” cards and 6 “flower" cards: they will be placed on the grid at the end of the game. Each player will also take 14 seeds.

The game begins with whoever ultimately planted a seed in real life.

Then the turn of the game will always be the player with the backmost token on the multi-colored board.

The player must choose between:

A - Take one of the three cards to the right of the location mark; or

Each time a square with a “flower" or “aromatic” card is passed on the multi-colored board, the player wins that piece, removes it from the board and at the end of the game uses it to fill some space on its grid.

When the player passes a square with a seed, he wins it and can use it successively to make purchases.

The player who, on the multi-colored board, first passes over the square indicated by the symbol "?", must take an unexpected card.

The game ends when both players reach the central square of the multi-colored board called "arrival". Points are then counted to determine the winner using the following calculations.

The player count one point for each seed he have left. Then he add, according to the “Points” card, the value of each plant that he have in the grid and the eventual points for combos. Half a point must be discounted for each empty space in the grid.

The “flower” and “aromatic” cards are worth 0 points and are only used to cover the empty spaces in the grid. 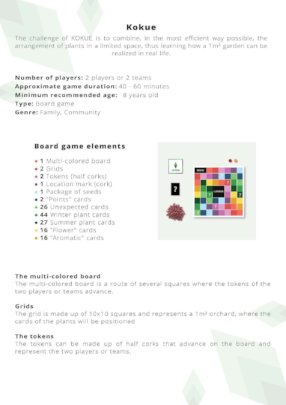 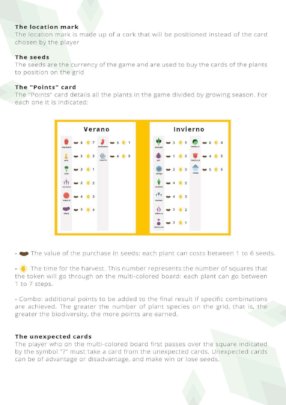 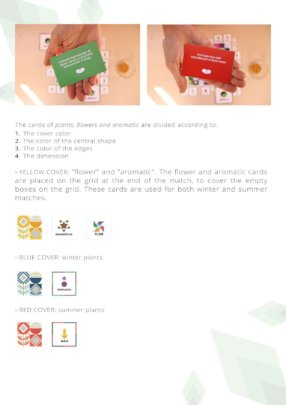 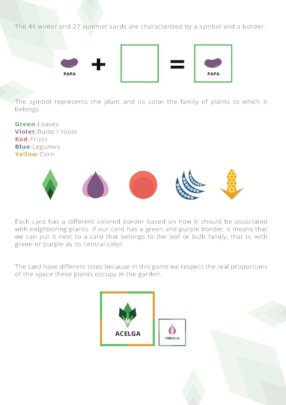 How do we keep quality education in COVID times 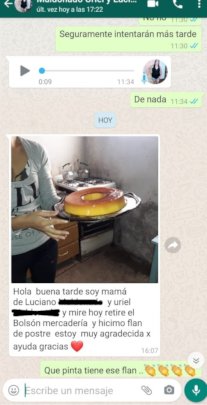 According with a recent report of the UNICEF, the 97% of Latin American students have not yet returned to the classroom. The COVID19 pandemic continues to paralyze the education of more than 137 million children and adolescents: since the beginning of the pandemic, Latin American students have already lost four times more days of schooling (174) than in the rest of the world.

More than a third of all Latin American countries still do not have a date for the reopening of schools. New data from UNICEF shows that the percentage of students not receiving any form of education has skyrocketed from 4% to 18% in recent months. The COVID19 could remove up to 3 million more children from school in the region. In addition, the pandemic has further widened the educational gap between rich and poor countries. Only half of public school students have access to quality distance education from home, compared to 75% of private school students.

This is happening also in Argentina, where also few rural schools have started to bring presential classes again, while urban areas have no plans to go back to classes until the next lecture year that will start on march 2021. In fact, schools are facing summer holidays that will start on the beginning of December.

The only way we had to face this tremendous challenge was a good teamwork between teachers, directors, families and donors. Here some of the activities we are carrying on since march: 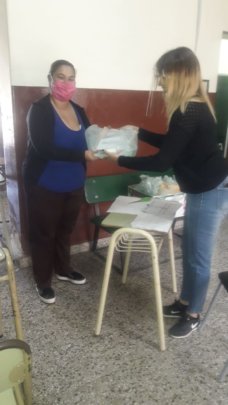 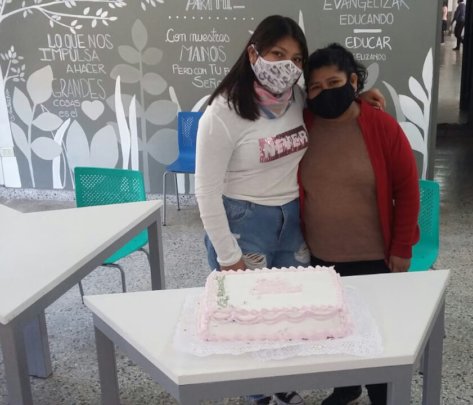 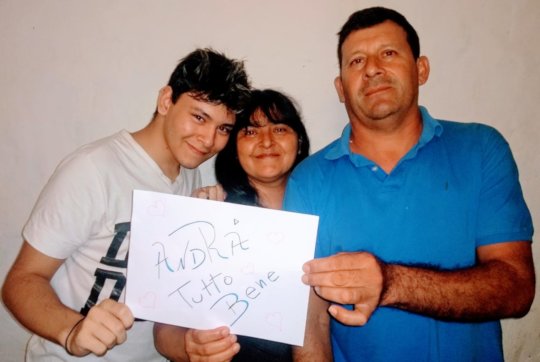 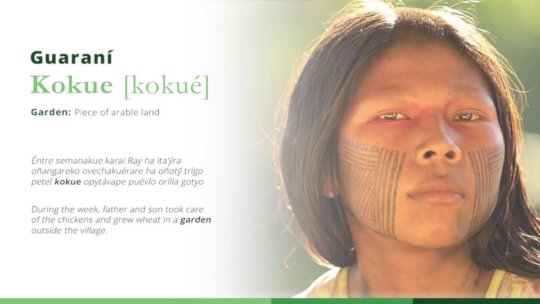 The project focuses on the right of vulnerable families who live in the Gran Chaco to adequate and healthy nutrition, promoting knowledge and education to sustainable agriculture and food sovereignty through an application supported by a board game: in this In this way, the recipients of the project will be able to learn how to cultivate agroecological gardens in a playful and creative way.

Hence the idea of creating Kokue, which in Guaranì, the language of some indigenous communities of the Gran Chaco, precisely means "vegetable garden".

It is an app and a board game that can teach in an easy and accessible way techniques and tools for the cultivation of agroecological gardens. In an attempt to introduce a cultivation method that respects biodiversity, in order to ensure healthy and adequate nutrition, Kokue will plan the preparation of a vegetable garden step by step.

In the App, a sowing calendar will suggest, also through a system of notifications, the cultivation of seasonal plants (primarily fruit and vegetables, given that the Gran Chaco food diet is lacking) and, through a weather alert system it will also be possible to take the necessary precautions against climate change.

In addition, there will be a space for sharing good practices and an area dedicated to how to prepare organic fertilizers, a channel for the exchange of seeds between producers and a recipe book to promote good nutrition.

In the board game, through a path in squares, the recipients of the project will be able to build their own garden on a board corresponding to a square meter of soil, effectively transposable into reality, taking into consideration also the possible associations between different plants in order to optimize the space through the complementarity of different species. Although most of the population of Gran Chaco have a smartphone, they are not used to using it. The goal is therefore to also impart digital education and the game, in the logic of mutual support, is an incentive to use the app. 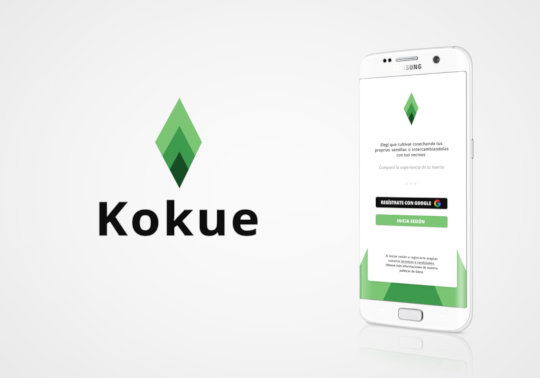 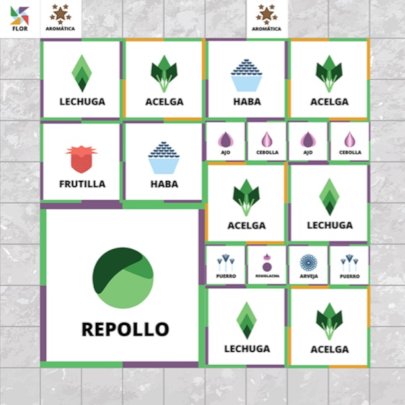 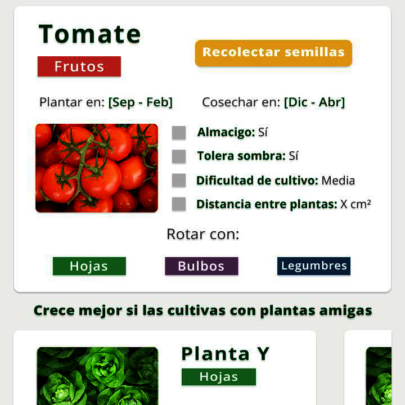 1 2 3 4 5 ›
WARNING: Javascript is currently disabled or is not available in your browser. GlobalGiving makes extensive use of Javascript and will not function properly with Javascript disabled. Please enable Javascript and refresh this page.