One Special Sloth by the name of 19 November 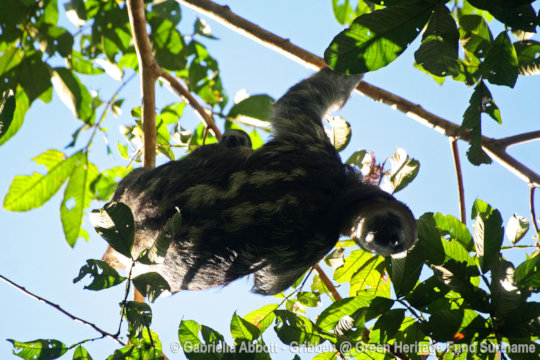 Maddy watching us and the visitors

It's a little over one year now that we moved to the center and let all of the animals that used to live in my house find their own way in the forest around the center. Some of the animals we never saw back, like Lucas and Ann. However, 19 November and Anna can be regularly seen in the trees around the center. Not necessarily coming up very close, but close enough to make us certain they were doing well. Ten days ago a visitor noticed that 19 November who was up in a tree, but not in her usual spot, had a hitchhiker. And believe it or not, we do think she is showing off her baby to us and our guests. A definite beauty this baby, who we named Maddy after the visitor who first saw her. This breaking news with pictures and videos was immediately shared with our app subscribers.

Our intern Rory left after having stayed two months. She had so much to tell, that we cannot share all of it here, but if you want to read her full post, we have shared it on our website. For us it was a rewarding experience to have Rory around, who not only helped us with the care of the orphans, she also learned a lot from them. She came to appreciate them for the individuals they are. She was personally experiencing their development as they dared to venture out of the center into the forest for longer periods. As we are preparing for our wildlife welfare workshop in January, Rory has extensively studied everything about how our interactions as humans with wildlife, in Suriname, and around the world, affect wild animals. How we too often only look at populations of wild animals and their numbers, but forget to look at their individual well-being. After all, each individual is a crucial building stone in a healthy population, so if on an individual level their welfare is compromised, the welfare of the whole population will be compromised. We said goodbye to Rory for now, but are sure we will see her back in the future. Especially, as only one week after she left, a new baby arrived who we named after her.

The dry season has come

We experienced in the past months so much rain that often we could not reach the center with our famous rescue vehicle. Only the toughest four-wheel drive trucks could reach all the way to the center. Rescued animals were also brought to the rescue center by four-wheel drive truck from the beginning of the road. To save the road further damage, we asked visitors to park in the front and wear rubber boots as they made their way to the sanctuary. With the dry season the school holiday is also on our doorstep, and we are looking forward to receiving holiday makers and tell them about the work we do and the animals we take care of.

We thank you for your continued support, and we really do hope that you will come and visit us. 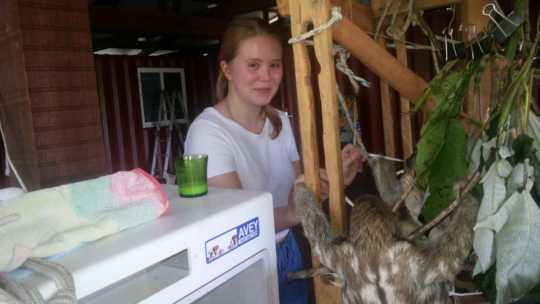 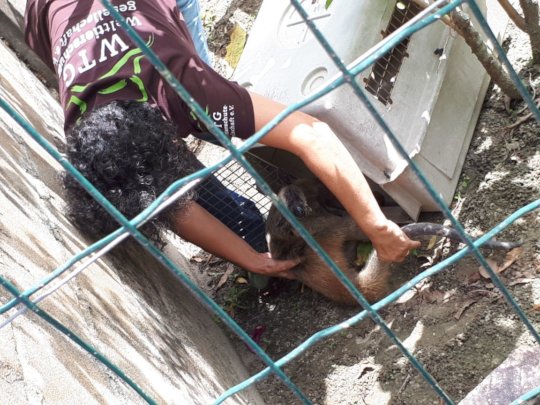 The wounded anteater is taken from a garden

This year we already had many rescues and releases. Rescues normally involve animals in difficult situations, where the humans are not looking forward to co-habiting with a sloth or anteater either in their house, under their roof, or on their roof. Some of these rescues were not the normal rescue, care and release cases. Two of these rescues both involved lesser anteaters, that were wounded so severely that we did not know if they would survive.

On January the 30th a lady called for an anteater rescue. She told us that the anteater was walking in the yard and climbing on the fence. "This behavior is unusual for a nocturnal animal,” I immediately remarked. The lady explained that she was afraid that the anteater was aggressive and therefore asked if we could rescue him before the neighbors' children got back from school. When we arrived at the destination we noticed that there were boards in front of the fence and the house. Before we could get to him we needed to climb over the fence. We found him laying on the ground in a corner with no movement and noticed that he had a wound on his head and on one eye. He was bleeding from these injuries. This was clearly the reason why the animal was moving during the day, it wanted to find a safe place.

Without hesitation we placed him in the kennel and drove to the veterinarian. There they anesthetized him and cleaned his wounds, gave intravenous fluids and antibiotics, as well as a painkiller. Probably, he had a concussion, and it was clear that there was blood in his eye. We took him with us to the GHFS office in the city to rest and for closer observation and further treatment. Together with the veterinarian we kept a close eye on him and the process to his recovery. He received intravenous fluids for several more days, until he produced his first pee. We also found the animal sleeping in typical anteater fashion, with the head between the hind legs, only showing its nose. In the last week before he was released we saw that he displayed more and more normal behaviour, when we cleaned the cage. He ate termites' nests at night, would drink the yoghurt we provided, something the animal clearly took a liking to. Within 20 days he was fully recovered and ready to be released in Saramacca. Treating the animal was no longer possible, as it would stand up in attack position, a clear sign it had recovered very well. We took the animal on the 17th of February to the Bloemendaal Apartments resort, where they assisted us with the boat to bring the animal to the uninhabited shore of the Saramacca river.

On Saturday the 7thof April again a wounded lesser anteater was reported. The person who had found the animal on the Highway had not actually seen that the animal was hit by a car, but it was lying near the road. He put it in a box and took it with him in the hope it would get better. At the end of the day he decided to call to get assistance. As I was in Saramacca at the sloth rescue center, I called our veterinary doctor Audrey to see if she could help. While the gentlemen were driving from the south to the vet, I was driving back from the west to the vet. When I arrived at vet Audrey’s office they were already there, and she had started the treatment. The animal came in bleeding from its nose. And while she treated it, it had some sort of epileptic seizure. There were no external wounds, no swelling. We can only guess what happened to her. After 3 days I saw her eating for the first time. After a few days more rest she progressed from limited mobility in the city to a bigger enclosure in Saramacca, where they continued to monitor her and provided her with her favorite food, termite’s nests. She was released after ten days with us.

We are grateful for these happy endings. Unfortunately, not all our rescues have a happy ending and each and every time it remains our single most important task to provide each individual animal with the best care we can get. We thank you, our Global Giving friends, as always for your continued support. 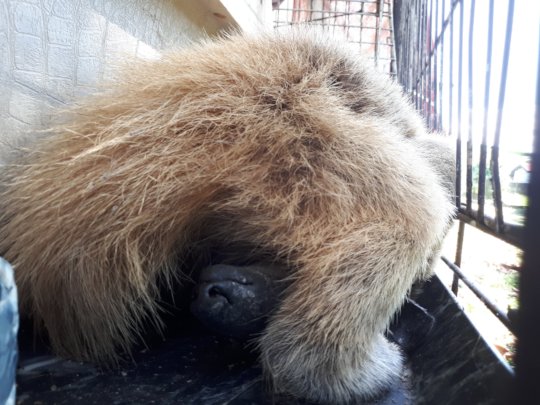 Sleeping in typical anteater fashion
May 16, 2018

We're getting there...little by little 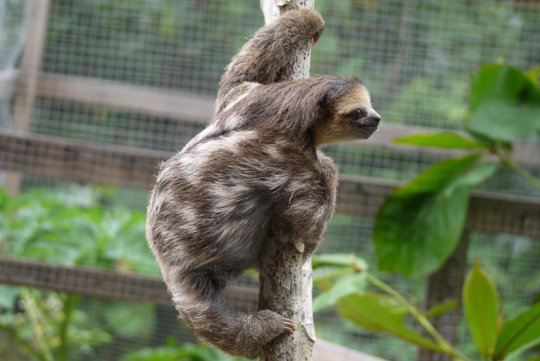 Jinkoe has grown a lot and is venturing out

In our last report we mentioned that we are making the finishing touches to our facility. And this is indeed truly happening as you can see from the pictures in our 5thSloth Wellness Picture Report. The animal kitchen is funded by Welttierschutzgesellschaft with whom we signed a second partnership agreement that next to animal welfare will also focus on more information and awareness-raising, a training in the medicine of sloths, a sloth action plan, as well as a wildlife welfare workshop. So, that means it is going to be a busy year for us next to our rescues and releases. The intensive care unit and the animal treatment room were also completed as shown in above report with the financial support of Kosmos Energy and you, our GlobalGiving donors. Outstanding on the intensive care unit is the air-conditioning to ensure that the temperature inside this unit remains stable. The human kitchen was fully funded by our GlobalGiving donors. We sometimes do tend to forget that the humans providing care for our animals need to be taken care of as well.

We are now working on finishing the educational part of our center. The graphics and lay-outs are being prepared. Our star volunteer Wynne prepared everything in word and idea, now it’s the job of the graphic designer to bring it to life. Kosmos Energy provided funding for the educational part of our center and this will be brought into place in the coming month. We are now searching for a part-time educator who will receive visitors who have made an appointment. It is sometimes hard to explain to our visitors that we do not keep animals in cages and that there is no guarantee that if they visit they will see something. Ana and 19November remain around the center and show themselves erratically, and the same is true of Beertje. Although he does seem to enjoy getting his apples, pumpkin and rice from time to time.

Our three juveniles are not on show, so we do not allow visitors to come in that part of the center where they are. However, especially Jinkoe is now showing some independence and can regularly be seen in the trees next to the center. Ostrich is not as adventurous yet, although she is a month older. When I say she, I have to confess that as long as she is not one year old, we do not know for sure if Ostrich is a female. The same is true for Jinkoe. Avi is growing well, that is our two-fingered sloth baby who we allow to venture out of the incubator in the evening. Often that leads to trips into the jungle gym where the animal suddenly tends to feel insecure and it then starts screaming for its mother. When the red teddybear is held in front of Avi, she climbs so fast onto it, that you would not believe it is really a slo(w)th.

Our next big project is setting up a good storage facility, where we can keep our kennels, stocks and other utensils that cannot be stored in the main building. We hope this can be done with some financial aid from our donors in the coming months. As always, we thank you for your generous support for our sloth rescue center. 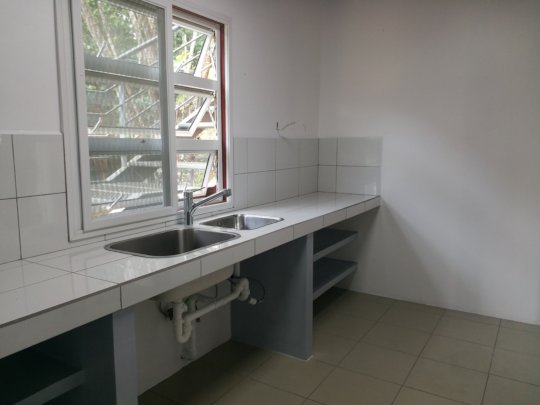 Animal kitchen ready for use... 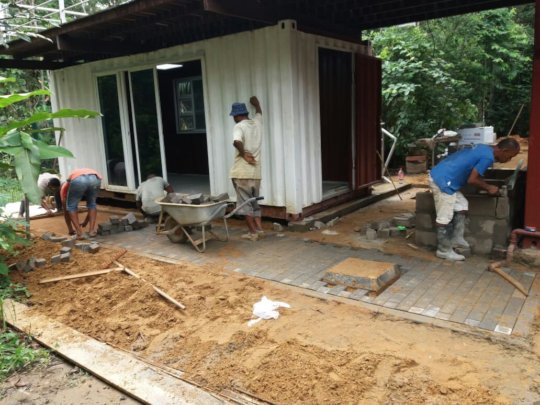 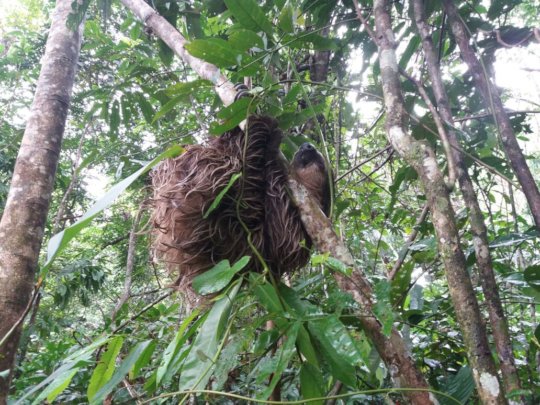 Beertje likes to visit and have a bite 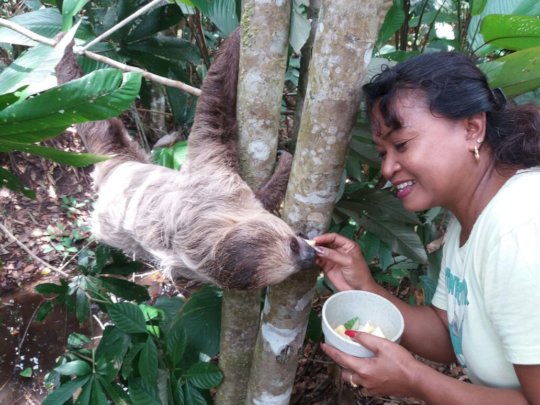 Animal caretaker Yvonne hand-feeding Beertje
‹ 1 ... 3 4 5 6 7 8 9 10 ... 15 ›
WARNING: Javascript is currently disabled or is not available in your browser. GlobalGiving makes extensive use of Javascript and will not function properly with Javascript disabled. Please enable Javascript and refresh this page.